The resolution urges the Indian parliament to repeal the Citizenship (Amendment) Act and stop the National Register of Citizens. 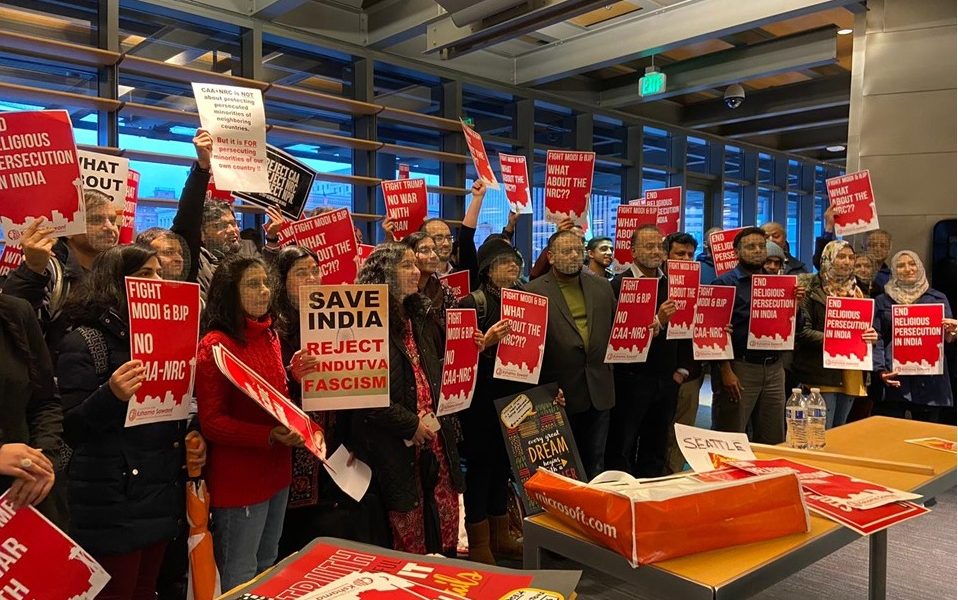 Indian-Americans protesting against the CAA in Seattle. Photo: Twitter/@indians_seattle

New Delhi: The Seattle City Council has become the first legislative body in the United States to pass a resolution against the Citizenship (Amendment) Act and National Register of Citizens in India. The resolution was sponsored by an Indian-American council member, Kshama Sawant.

Saying that the “far-right” politics of the Bharatiya Janata Party had been recognised as discriminatory, the resolution says, “Most Indians lack documentation such as birth certificates to prove citizenship, and a nationwide expansion of the NRC could strip hundreds of millions of people (disproportionately Muslim, oppressed castes, women, indigenous and LGBT communities) left out of the CAA of their citizenship rights with no option to be re-naturalised.”

It goes on to state that the Indian parliament must take immediate action against discrimination:

“This resolution reaffirms Seattle as a welcoming city and expresses solidarity with Seattle’s South Asian community regardless of religion and caste. It also resolves that the Seattle City Council opposes the National Register of Citizens and the Citizenship Amendment Act in India, and finds these policies to be discriminatory to Muslims, oppressed castes, women, indigenous, and LGBT people. This resolution urges the Parliament of India to uphold the Indian constitution by repealing the Citizenship Amendment Act, and to stop the National Register of Citizens, and take steps towards helping refugees by ratifying various UN treaties on refugees.”

Indian-American groups that have been protesting against the Act in different ways celebrated the Seattle City Council’s decision.

Equality Labs, a South Asian human rights group in the US, released a statement thanks the Council and the people of Seattle. “Thousands of organisers across the country have called, e-mailed, and visited Seattle City Council members to amplify this Resolution, and it sets an example to cities across the United States – that we do not stand on the side of genocide. At a time when members of the Indian ruling party cited Trump, the Muslim ban, and his war on immigrants as justification for targeting hundreds of millions of Indian minorities, Americans have a unique responsibility to stand up and speak about this human rights crisis. We are glad that Seattle is leading the way on this,” the statement says..

As The Wire has reported before, a number of Indian-American groups have been using multiple forums to ensure that the US takes a strong stance against the CAA and NRC. According to Seema Sirohi, “Some analysts see a resurrection of the old anti-Modi “Coalition Against Genocide”, which prevailed in the US Congress to deny him a visa while he was chief minister of Gujarat.”

Protests have also been held across cities, including New York, Washington, Minneapolis and others.