Searching for Water in UP's Manikpur

An acute water crisis is unfolding in Manikpur as village authorities fail to accept responsibility, much less initiate action to improve the situation. 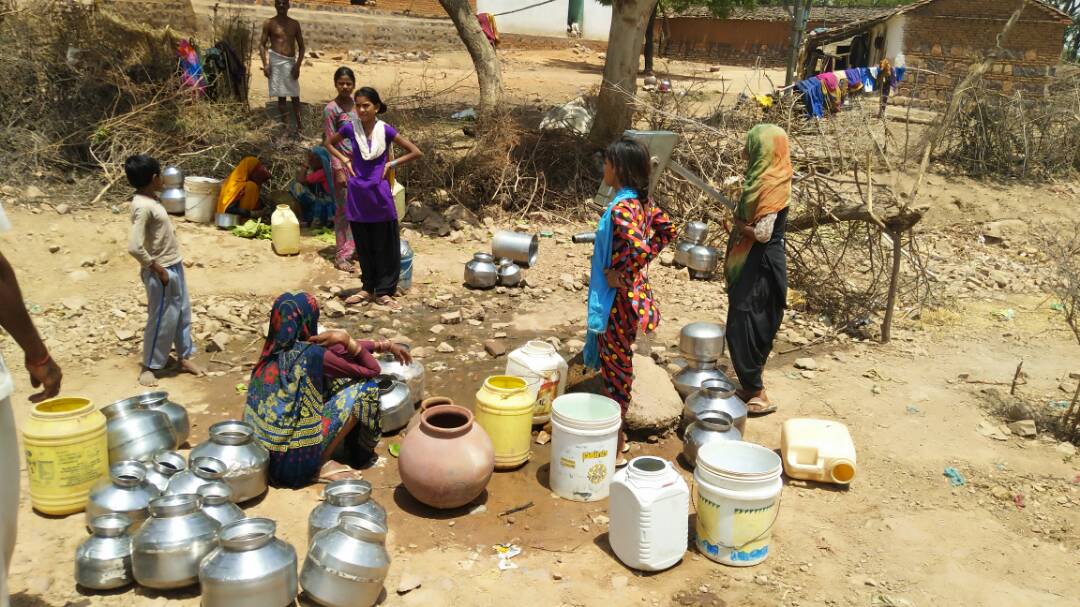 Manikpur, Chitrakoot: “All of them come here asking for votes, but not one of them has ever got a handpump installed for us! We helplessly roam around looking for water every day,” says Bhondi, a resident of Sarhat village of Bundelkhand’s Chitrakoot, wearing lines of resignation and exhaustion on her face.

Sarhat is a forgotten place. Situated in Chitrakoot’s Manikpur block, the village is home to largely a tribal population, with approximately 80 families who have lived with a critical water crisis situation for decades. Only two out of the seven village handpumps are functional – and the term can only be used loosely, for the days that they decide to show mercy and spew water are few and far between. While the summer months are the worst, with groundwater levels acutely low and a chunk of Bundelkhand parched as is, things in Sarhat are at a point where a water shortage has become routine, even at the onset of winters.

Most of them have resigned themselves to their fates of having to walk long distances hunting for water to wash, cook, and drink on a daily basis. “We have to go deep into the forest looking for water, it is so inconvenient and also dangerous. From the adults to the young kids, be it boys or girls, all of us go to some pond or the other to even have a bath,” says Bhondi.

The villagers claim that they have made countless representations about the acute water crisis to the pradhan as well as the secretary of their village, requesting them to get the handpump situation fixed – have more installed, or get the defunct ones to work. But their complaints have fallen on deaf ears, says a Sarhat local, Dinesh. “Only two of the seven handpumps are in a functioning state, the rest are good for nothing. When we complain to the pradhan, she diverts us to the secretary. We keep shuttling from one to the other, but no one cares enough to take any action, do something about it.”

Our interview with the village pradhan, Priyanka, turns out to be bizarre, because she has an explanation to offer. She claims that the village is situated next to a deep trench because of which groundwater levels tend to fall, a phenomenon not only unheard of and unscientific, but also untrue. She further puts the blame squarely on the villagers, alleging that they refuse to cooperate and assist in getting the handpumps repaired despite her office sending mechanics for the same. “We are ready to pay whatever it takes, we even send mechanics to the village. But if the villagers do not get the work done with him, what can we do?”

Also Read: In UP’s Chitrakoot, the Administration Only Has Quick Fixes for the Water Crisis

To make matters worse, the local authorities instead keep asking the villagers to pay money to get the handpump-related work done. And this is when large parts of the Bundelkhand area have already been declared as “dark zones” – a term for areas with severe over-exploitation of ground waters – thereby making it a primary duty of the local administration to address the water crisis. Drought mitigation strategies have particularly been accounted for in all the special packages that have been announced so far with respect to Bundelkhand. However, almost a decade has passed since the first special package, and its benefits are yet to trickle down to the people of Bundelkhand.

As for Chitrakoot’s Sarhat village, the situation remains grim as the secretary too only has non-committal responses, which are not necessarily reflective of the truth. “When a handpump breaks down, we immediately get it fixed as soon as we receive a complaint. While it is possible that some handpumps are giving less water because of the low groundwater levels, most of the handpumps in Sarhat are working fine to the best of my knowledge.”

Khabar Lahariya is a rural, video-first digital news organisation with an all-women network of reporters in eight districts of Uttar Pradesh