Rizwan Asad's father has called it 'cold-blooded murder' even as separatists and mainstream politicians have condemned the 'custodial killing'.

Awantipora (Pulwama): A school principal who was detained by the Jammu and Kashmir police for questioning in a “militancy related case” died in police custody in Srinagar, triggering protests and clashes across Kashmir.

Rizwan Asad Pandit, a resident of Awantipora in south Kashmir’s Pulwama district, was picked up by the police late March 17 during a raid at his family home, his father Asadullah Pandit, a retired government employee, told The Wire .

Early this morning, reports started circulating on social media that 30-year old Rizwan had died in police custody during the previous night. A statement issued by the police confirmed the death on Tuesday afternoon.

It, however, didn’t mention the cause of death or provide any further details. At the time of publication, the family was yet to see or receive the Rizwan’s body.

The police statement also said a magisterial inquiry has been ordered under section 176 of the Code of Criminal Procedure, and the police has also started an investigation. “The magisterial probe is part of the procedure laid down in the law, in case of a death in custody,” said a senior police officer. 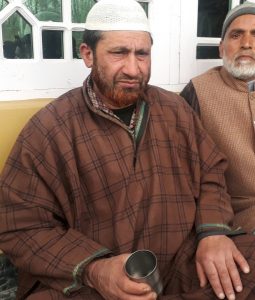 Sitting on the verandah of his house, a shattered Pandit alleged that when a contingent of the J&K police raided their house at around 10.30 pm on Sunday, the family was warned not to tell anybody about Rizwan’s arrest.

“They took away my son, assuring us he would be released the next morning. But today I got a call from the police that my son has died. It is cold-blooded murder. How could they kill my son and then ask me to take the body home?” asked Pandit, who is a rukun of the Jama’at-e-Islamia – the Islamist organisation banned by the Centre last month. Rizwan was also associated with Jama’at, according to his family.

His elder brother Mubashir said the victim was the principal at a local private school where he also taught chemistry and ran a tuition centre in the main market of Awantipora, barely a kilometre away from their two-storey house. Rizwan taught at the government polytechnic college in Awantipora last year, where he was hired as contractual lecturer.

Rizwan had completed an MSc in chemistry from Dehradun and was planning to apply for a PhD at Kashmir University, said Mubashir, the eldest of six siblings.

Rizwan’s younger brother, Zulkarnain, said the family members had gone to the local police station on Monday evening to seek the release of his brother. “But we were told there that he has been shifted to Cargo (the headquarters of the J&K police Special Operation Group in Srinagar),” he said.

A relative of Rizwan alleged that he had been harassed by the police in the past too and had been arrested on two occasions in 2015 and 2017. Last August, he was arrested by the police and booked under the Public Safety Act (PSA), which gives the state the power to jail a person for up to two years without a trial.

“My brother was falsely shown as a threat to law and order. His only crime was that he was a teacher. He spent more than six months in jail at Kathua (in Jammu) before he was released in February this year,” said Mubashir, who is also a teacher at another private school.

Mourners at the Pandit home. Credit: The Wire

“Come my son, the light of my eyes, I’m eagerly waiting to serve food to you,” Rizwan’s mother wailed at Rizwan’s home.  “This is what mothers in Kashmir face every day,” another woman at the home said.

Women from the neighbourhood and adjoining villages began assembling at Rizwan’s house from the morning, filling the air with wails and cries. Among the mourners were also students from the school where Rizwan worked. These students, mostly girls, were all in tears.

“We haven’t lost only a teacher but our elder brother too,” said a group of students.

“You were so innocent. How did they gather courage to snatch you from us? How can we tolerate this separation?” cried another woman as an elderly person with a grey beard tried to console her. He told the mourners that the authorities would hand over the body late in the night.

“It will be a long wait for the family to see their son for one last time before bidding him adieu,” said another woman.

Condemning what they called a “custodial killing”, both mainstream and separatist politicians demanded a time-bound probe into the incident and exemplary punishment to the accused.

“I had hoped custodial deaths were a thing of our dark past. Exemplary punishment must be handed out to the killers of this young man,” former chief minister Omar Abdullah said.

I had hoped custodial deaths were a thing of our dark past. This is an unacceptable development & must be investigated in a transparent, time bound manner. Exemplary punishment must be handed out to the killers of this young man. https://t.co/Jj9RzsFu7r

Innocent men hauled up from their homes for interrogation return home only in coffins now. GoI’s repressive approach leaves young educated men vulnerable who are forced to take up arms. Stop using Kashmir to exhibit your sick chauvinistic nationalism. We have suffered enough. https://t.co/YF4RhVb1QQ

Senior separatist leader Mirwaiz Umar Farooq said that the “custodial killing” of the teacher has once again exposed the “helplessness” of the people of Kashmir. “Distraught at the brutal custodial killing of young Rizwan Ahmed of Awantipora. The brutal killing once again exposes the, helplessness, vulnerability and insecurity of the lives of Kashmiri’s as impunity to the authorities keeps rising,” Mirwaiz wrote on social media.

A town on the edge

Rizwan’s death in custody comes in the midst of an ongoing crackdown by the J&K police against separatists, the Jama’at and their alleged sympathisers in Kashmir ahead of the Lok Sabha elections.

While the “custodial killing” triggered protests and shutdowns in several parts of Kashmir, angry young men outside Rizwan’s house raised pro-azadi slogans and pelted stones on a contingent of  the police and CRPF that was deployed to prevent them from marching towards the local police station.

The forces responded with aerial shots and fired teargas shells, some of which landed close to the Pandit family house. “They (the forces) are not even sparing the women mourners,” one man said, breathless thanks to the smoke emanating from the teargas shell.

With tension rising across Kashmir, the security forces sealed all roads leading to Awantipora – located on the old Srinagar-Jammu highway.

“We aren’t even allowed to mourn deaths in Kashmir,” said Ghulam Hassan Mir, a local.