Police arrived at his doorstep an hour before Pandey was to leave for a candlelight vigil in Lucknow.

New Delhi: Magsaysay award-winning social activist Sandeep Pandey said he was placed under house arrest an hour before he was about to leave for a candlelight vigil at Lucknow’s Hazratganj against the Centre’s decisions on Jammu and Kashmir.

This is the second time that Pandey was pre-emptively put under house arrest while attempting to protest against the Kashmir issue. On Sunday, August 11, he and his wife, activist Arundhati Dhuru, were briefly put under house arrest in Lucknow’s Indira Nagar by local police in an attempt to stop a demonstration which the couple had organised to oppose the scrapping of the state’s special status.

“I have been placed under house arrest for the second time,” Pandey told The Wire over phone.

“We were planning to have a candlelight vigil in support of the people of Kashmir this Sunday on August 11. Then we postponed it for Eid on the police’s request and scheduled it for today,” he added.

Pandey said he was leaving the house to be on his way to the protest when police appeared. “The candlelight was scheduled for 6 pm today at Hazratganj. The police are currently standing outside my house. My friends have assembled here,” he said.

The activist said he was told by police that he “did not have permission for the programme.” But he is not convinced. “This is unusual as normally when you organise a demonstration without any permission, the police will come to the venue and tell you that you don’t have permission,” he said.

“In two attempts, at 5:10 pm and 5:30 pm roughly, the police didn’t let me out, saying I didn’t have permission for a demonstration. But they also didn’t have any orders to prevent me from going out. In the meanwhile, some 20-25 people had gathered at my place. So after 6 pm, the scheduled time of the demonstration we decided to stage a symbolic demonstration outside our house. The police decided to get a bus to arrest us. Before the bus arrived, we had walked with placards and candles,  about 1 km heading in the direction of Hazratganj, our original venue of demonstration.”

As it started raining heavily, Pandey and the others sought shelter under a tree. “By then, the police bus had arrived ut as it had become dark and it was past 7 pm – our scheduled demonstration was for 6-7 pm –  we decided to conclude our march. We walked back to my house and the police went away.”

Pandey added that when he and his friends began their march, the police locked Advocate Mohammad Shoaib, who was also under house arrest, inside his house near Latouche road along with five or six activists to prevent them from taking out a similar protest. 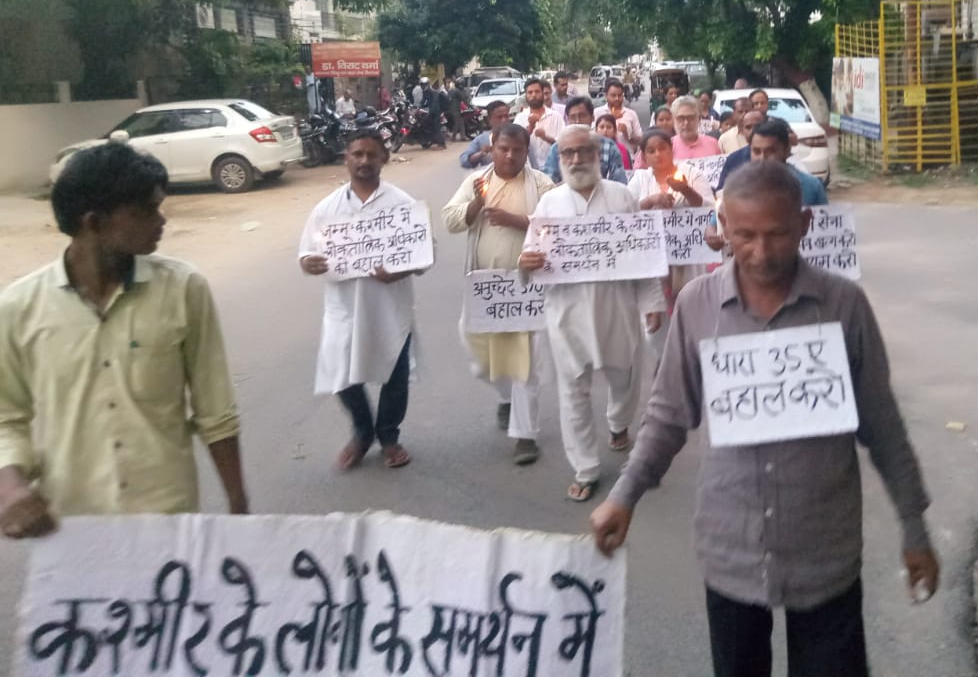 Pandey and other activists were able to take out a small march eventually. Photo: Special Arrangement

On Sunday, after news of his house arrest was reported across portals, local administration was reported by Hindustan Times as having denied that he was put under house arrest. District magistrate Kaushal Raj Sharma had told the paper, “Why should we arrest him? There is no truth in it. Yes, the administration did not allow him to hold a demonstration at Gandhi statue in Hazratganj, as he had announced on Friday. They are free to state a protest in Eco Garden, which has been made the official dharna sthal (protest ground) so that no inconvenience is cause to commuters.”

Pandey is prominent in the activism ground. This is not his first brush with authorities. In 2016, Pandey’s teaching contract as a visiting professor at the Banaras Hindu University’s Indian Institute of Technology was abruptly terminated on charges of him being “involved in anti-national activities and (being) a Naxalite” and for allegedly “showing the banned documentary on the Nirbhaya case, India’s Daughter to his students.”

Speaking to The Wire then, he had said, “I wish to clarify that I am not a Naxalite. The ideology I would consider myself closest to is Gandhian.”