‘Imagine Not Getting Paid for 5 Years’: Awaiting Dues From Centre, Madrasa Teachers in Dire Straits

Nearly 50,000 teachers joined madrasas under the modernisation scheme. For almost five years, they have not received the Union government's share of the salary. Ghaziabad, Uttar Pradesh: “Are you looking for Pandit principal sir? He will come at 9 am to teach Hindi to the girls in the madrasa,” a man standing outside Madarsa Jamia Rasheedia (MJR) Girls Higher Secondary School in Ghaziabad’s Loni says to this correspondent.

He is referring to Ram Khiladi, a Hindi teacher as well as the principal of this small school, known locally as “Pandit principal”, referencing his Brahmin caste and his professional designation. He is also the senior-most teacher at the school. 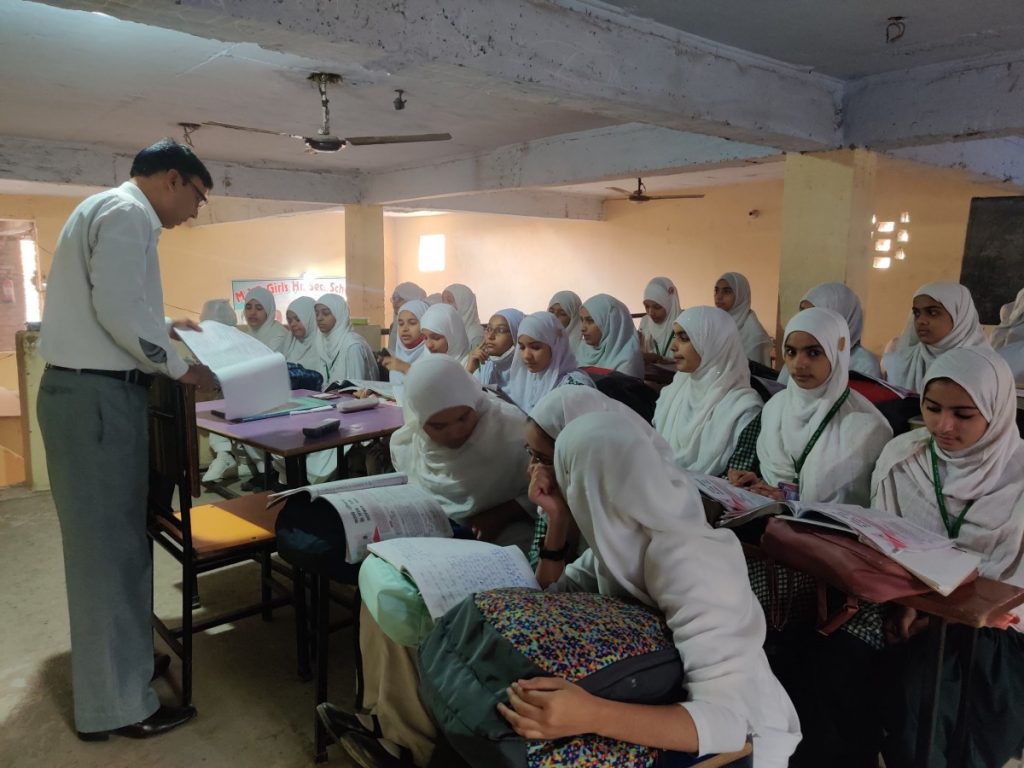 Upon entering the madrasa, one is greeted with the sounds of students from different classes from nursery to Class X answering questions asked by their respective teachers in unison.

Due to the segregation of male and female students, the school has more groups than available rooms. Sometimes, two different batches are taught by separate teachers in the same room.

A board with photographs of smiling students, accompanied by their names, that shows the past year’s toppers hangs in the small hallway of the two-storey building that houses the school. All of them are girls wearing the hijab. Out of the 800 students enrolled at the madrasa, close to 500 are girls.

Nawab Ali, the Imam (Islamic priest) who heads the madrasa, says that all the students come from marginalised and poor backgrounds. All the toppers in 2019 were girls. Photo: Ismat Ara/The Wire

Contrary to popular perceptions of a madrasa, this one teaches modern subjects to its students besides Quranic teachings or Islamiyat. This is mandated by the Union government’s madrasa modernisation programme. Among languages that are taught are English, Hindi, Urdu and Arabic, apart from subjects like maths, science and social science.

Some of the parents whose children study here told The Wire that they wanted a modern education for their children, including skills such as typing and using a computer. These will be handy tools when the children start looking for jobs, the parents said.

The bell rings and Ram Khiladi’s class ends. He finishes the class with a Hindi poem, “Le dekar jeena, kya jeena? Kab tak ghum ke aansoo peena. Manavta ne seencha tujh ko, baha yugon tak khoon pasina…kuch bhi ban, bas kayar mat ban. (How long will you beg to live and live this life full of disgust? Humanity will serve you, you are capable of bearing the fruits of your blood and sweat. Become anything but a coward.)”

He explains after his class, “I read that poem for myself. My condition is so bad that I cannot explain it through words.”

When this correspondent asked if she could visit his house, Khiladi responds by saying that he is “too embarrassed” by his situation.

He explained, “Mai sharminda hota hoon jab koi meray ghar aata hai, itne bure haal hain. Bitha ke bhojan tak nahin khila sakta. (I live in such dire conditions that I am ashamed to take somebody to my house. I cannot even offer them food.)”

His house, which he calls his only asset, is covered with a tin shed. There are a few charpais, scattered utensils while the brick walls are bare and unpainted. Plastic bags and drying clothes on a wire clutter the view. 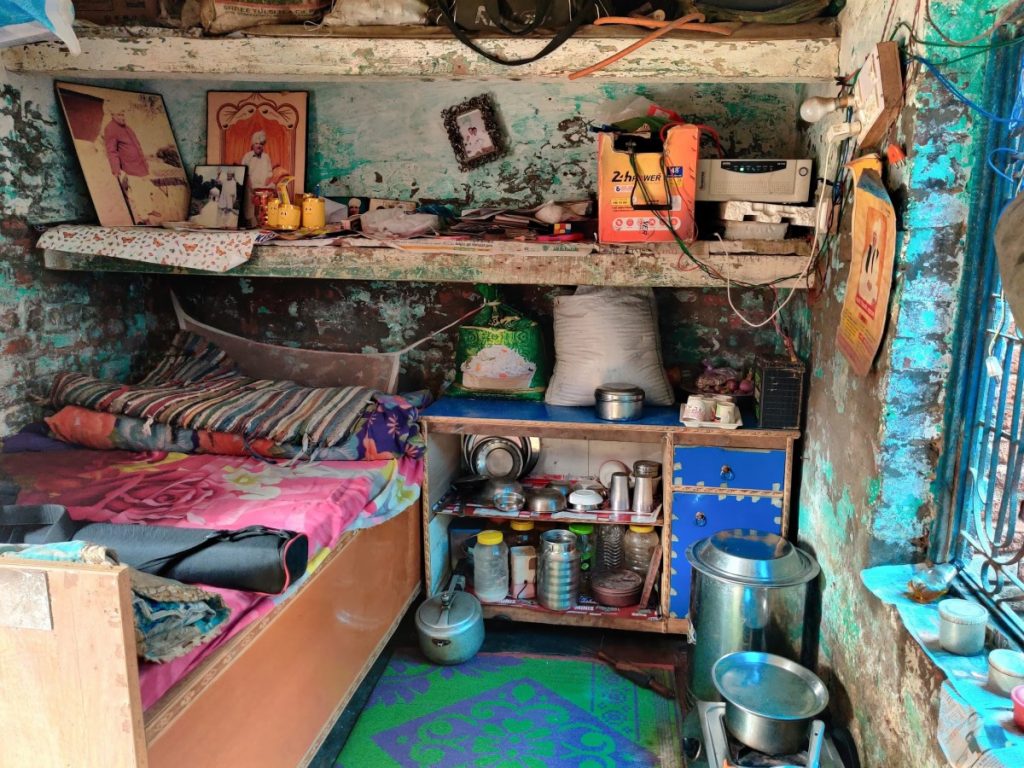 No salary in five years

A single father with two children, Khiladi has not received his salary since 2017 – almost five years. Khiladi had joined the madrasa a decade ago, in 2011, under the madrasa modernisation scheme.

His monthly salary is Rs 15,000, the most he can get paid based on his qualifications. But he is getting only Rs 3,000 from the Uttar Pradesh government. He is awaiting payment of dues worth almost Rs 7 lakh from the Narendra Modi-led Union government. The meagre sum of Rs 3,000 for his six-seven hour job is often not enough to cover basic necessities such as food. Sometimes he struggles with his children’s school fees and any medical expenses, forced to take small loans from neighbours.

Like him, close to 50,000 teachers across the country had joined madrasas under the modernisation scheme with the hope of becoming permanent government employees and earning a decent income while helping to modernise madrasas.

Teachers were hired under this scheme in 16 states, including Uttar Pradesh, Uttarakhand, Madhya Pradesh, Bihar, Chhattisgarh and Jharkhand. According to Nawab Ali, many are growing disillusioned. Madrasas are on the verge of closing down because of financial difficulties, he says. According to Ali, teachers who have not been given their salaries are dealing with immense mental stress. Others are taking up multiple jobs to manage their expenses despite having a full-time job. Ajaz Ahmad is national president of the Islamic Madarsa Aadhunikikaran Shikshak Association (IMASS), an organisation that working towards the modernisation of madrasa education. The organisation also tries to address the problems faced by madrasa teachers in India.

He says that the madrasa modernisation scheme had a positive impact on the standard of education and has resulted in many students getting a good education over the past two decades.

But now, he says, the teachers are demotivated because of unpaid salaries. This may also inadvertently impact the quality of education, he says.

“Madrasa teachers are on the verge of starvation. Some are under great mental stress and are even suicidal because they are facing financial difficulties. If teachers are unable to pay for the education of their own children, their performance is bound to get affected,” he told The Wire, adding that a majority of madrasa teachers are from poor backgrounds.

The non-payment of teachers’ salaries has become even more complicated since April this year, when the scheme was shifted from the Ministry of Education to the Ministry of Minority Affairs. Ahmad says while the backlog of salaries is still with the education ministry, the programme has been shifted to a different ministry.

Ram Khiladi recalls the time when he joined the madrasa in 2011. “We did not face many problems then. There were of course issues in getting girls to attend school and financial challenges to keep the madrasa running at times. But what is happening now is the worst thing that can be done to a teacher.”

He explains that most of his colleagues live in poor conditions. Even as skilled teachers with experience, he says, they are paid the same sum as unskilled labourers. Khiladi says, “When I have to ask people for petty loans, I feel ashamed.”

Changing fortunes of the scheme

The P.V. Narasimha Rao-led Union government in 1993 recognised the need for modernisation of education in madrasas and the scheme was launched by 1994. At the time, two teachers were appointed for each madrasa by the Union government under the scheme and their monthly allowance was Rs 2,250.

After a series of protests by teachers against the low salaries, the Manmohan Singh-led UPA government increased them to Rs 6,000 and Rs 12,000 for graduate and post-graduate teachers respectively.

Since the Modi government came to power in 2014, Nawab Ali says, things have become difficult. “Let alone modern education, even basic education has become difficult to impart,” he says, blaming the non-payment of teachers’ salaries as the main cause.

He also pointed out that the Modi government reduced the number of teachers per madrasa to three under the modernisation scheme. “How can three teachers impart a modern education to the 800 students who are enrolled here?” he asks.

Over the years, the Muslim community has understood the importance of education and sending children to madrasas, he said. Currently, there are about 20 teachers employed at this madrasa for the 800 students.

“Students are pouring in. What should we do? Should we send them back because we do not have enough teachers? We could not have done that, so we hired more teachers. But how do we pay their salaries without the government’s help?” Ali asks.

No hopes of becoming permanent employees

The irregular flow of funds has made it difficult to even impart basic education to the students, he says.

Ram Khiladi said the trend of privatisation has gained momentum since the Modi government came to power in 2014. He added, “Vajpayee was also from the BJP, but he never neglected the growth of madrasas. In fact, he would allot more money for this scheme.”

Under Vajpayee, the Union government had allotted Rs 539.11 lakh for the modernisation scheme to state governments, a huge jump from the Rs 3.04 lakh allotted in 1993-94, when the scheme was first launched.

Ali added, “We are grateful to Vajpayee for working towards making this scheme a success. But the Modi government does not seem to care about a scheme that Vajpayee was so connected to.”

He then asked, “We have given memorandums, protested and written letters. But we have only seen false promises. Can you imagine not getting your salary for even a month, let alone five years?”

Khiladi says he also fears losing his job. “Under Modi, we have no hope of ever becoming permanent employees even though many of us have given decades of our life to this scheme. We can be kicked out anytime,” he says.

Besides the backlog of salaries, another problem that teachers told The Wire about was the status of their job. None of the teachers appointed under this scheme are permanent government employees.

Do only Muslims study and teach at madrasas?

Khiladi says, “Even though Rs 15,000 is not a lot of money, it is enough to sustain ourselves. If I received this money regularly, I could live a decent life.”

He further says, “If PM Modi genuinely wants Muslim students to hold the Quran in one hand and a computer in another, there need to be computers in madrasas. The time and hard work of teachers need to be valued and they need to be compensated with salaries on time.”

But the government is too busy creating a “divide” between communities and is effectively “alienating” madrasas, Khiladi adds. “Does the government think only Muslims study or teach in madrasas? Don’t they know that close to 30% of teachers under this scheme are Hindus? The slogan Sabka Saath Sabka Vikas (prosperity for all) should be put in practice here,” he added.

His frustration also emerges from the fact that leaving this job would mean the possibility of forgoing dues worth five years. “Who knows if I will ever get it?” he asks. For now, he takes refuge in the fact that he has played his part in increasing the number of girl students in the madrasa from merely 5% to 60% over the past decade.

Like ‘Pandit principal’, most teachers continue teaching despite not receiving their salaries because of their passion for teaching. They also fear losing the past five years’ worth of salary and still harbour hope that they will get their dues someday.