Sabarimala Shut for 'Purification' After Two Women Below 50 Enter Temple

The visit reportedly took place in the wee hours of Wednesday in the presence of police personnel. 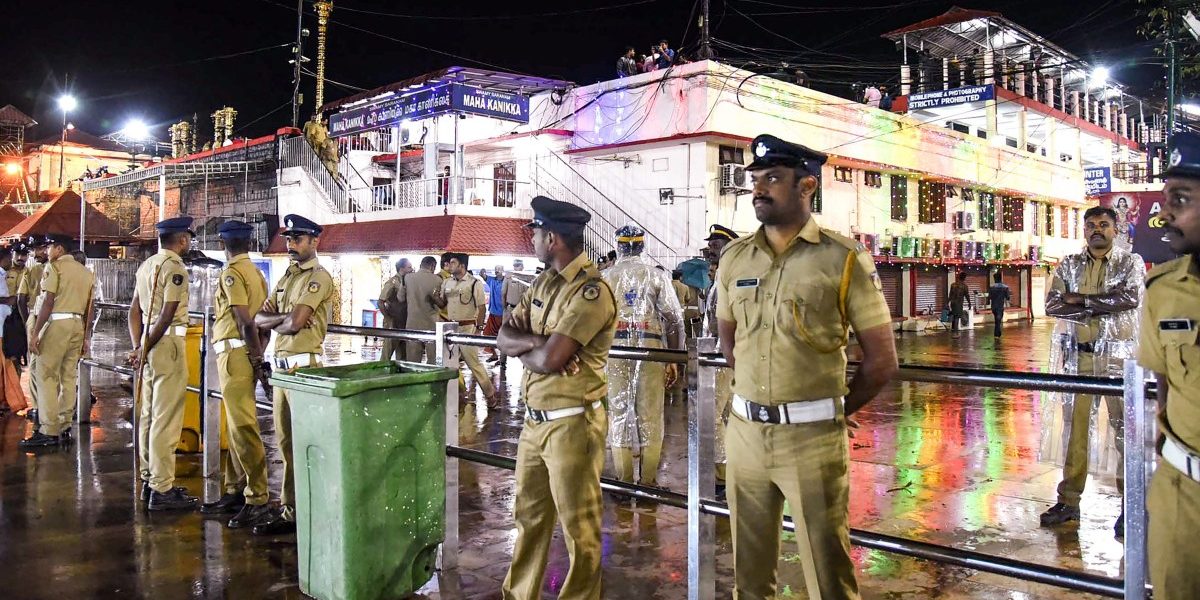 File photo of security being deployed at Sabarimala. Credit: PTI

New Delhi: Kerala’s Sabarimala temple has been shut down for a ritual of “purification” after two women in their 40s claimed they entered the shrine in the wee hours of Wednesday – becoming the first to do so since the Supreme Court allowed women of menstruating age entry into the temple.

According to a video accessed by NDTV, Bindu and Kanaka Durga – both in their early 40s – are seen rushing into the holy shrine of Lord Ayyappa. The duo had their heads covered, was dressed in black clothes and being escorted by the police. The visit reportedly took place around 3:45 am.

Police sources confirmed to the Times of India that plain-clothed police personnel accompanied the two women inside the temple. Some protesters can also be seen at the spot in the video.

Kerala chief minister Pinarayi Vijayan confirmed the visit, adding: “Police are bound to offer protection to anyone wanting to worship at the shrine.”

According to PTI, Bindu, a college lecturer and CPI(ML) activist from Kozhikode district’s Koyilandy, and Kanakadurga, a civil supplies employee from Angadipuram in Malappuram, had come to Sabarimala on December 24 after 11 women activists of a Chennai-based outfit were prevented from reaching the shrine and chased away by devotees chanting Ayyappa mantras.

Rahul Easwar, an activist and leader of the Ayyappa Dharma Sena, told NDTV that he didn’t think the visit actually took place. “They might have done that in absolute secrecy. Once we know, we will take appropriate action.”

Officials of the Travancore Devaswom Board have been asked to review CCTV footage to verify the claim of the two women. “We do not have any information regarding the matter and it did not come to our notice,” Sabarimala executive officer D. Sudheesh Kumar was quoted by Times of India as saying. “But whichever route they claim to enter is anyway heavily guarded by the police.”

Both women had attempted to visit the temple in the last week of December, however, they were blocked by massive protests. There has been a heavy rush of pilgrims since the temple reopened on December 30 for the Makaravilakku festival.

Since the Supreme Court judgment in late September, several groups have protested against the entry of women into the temple. Kerala’s opposition parties, including the Congress and the BJP, have been organising frenzied protests in the hill shrine after the CPI(M)-led LDF government decided to implement the verdict.

Fueled by these protests against the entry of women into the temple, over 35 lakh women stood shoulder-to-shoulder across national highways in Kerala on Tuesday – creating a 620 km-long human ‘wall’ from the northern end of Kasaragod to the southern tip in Thiruvananthapuram – as part of a state-sponsored initiative to uphold gender equality.

Meanwhile, the BJP leadership has said that if claims and reports of the two women entering Sabarimala are true, “those who are behind this action will have to face a protest in the coming days from the true believers for hurting them.” The party’s national executive member and leader V. Muraleedharan was further quoted by Times of India as saying: “They should understand that this is not a victory for them, but is something they should not have done.”