On maps produced in 2020 by the United Nations mapping unit in Myanmar, which it says are based on Myanmar government maps, the site of the destroyed village is now nameless. 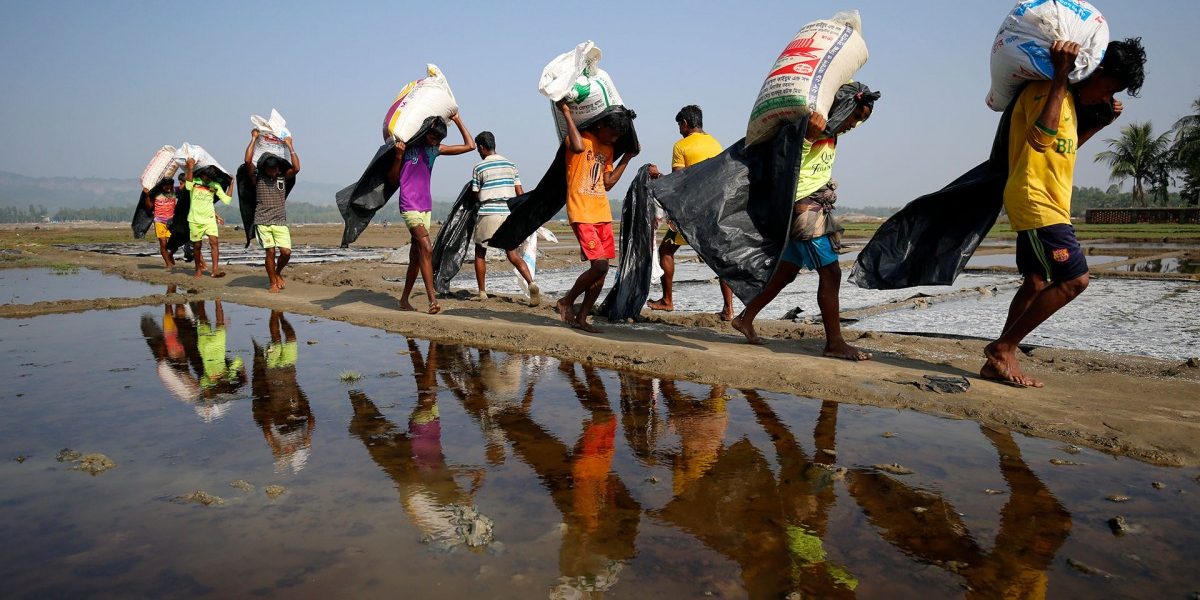 Cox Bazar/Geneva: Three years ago, Myanmar’s military burned the Rohingya village of Kan Kya to the ground and bulldozed over its remains. Last year, the government erased its name from official maps, according to the United Nations.

About 3 miles (5 km) from the Naf River that marks the border between Myanmar’s Rakhine state and Bangladesh, Kan Kya was home to hundreds of people before the army chased 730,000 Rohingya out of the country in 2017 in what the United Nations described as “a textbook example of ethnic cleansing.”

Where Kan Kya once stood, there are now dozens of government and military buildings including a sprawling, fenced off police base, according to satellite images publicly available on Google Earth and historical images provided to Reuters by Planet Labs. The village, in a remote region in the northwest of the country closed off to foreigners, was too small to be named on Google Maps.

On maps produced in 2020 by the United Nations mapping unit in Myanmar, which it says are based on Myanmar government maps, the site of the destroyed village is now nameless and reclassified as part of nearby town Maungdaw. The unit makes maps for the use of U.N. bodies, such as refugee agency UNHCR, and humanitarian groups that work with the United Nations in the field.

Kan Kya was one of almost 400 villages destroyed by the Myanmar military in 2017, according to satellite images analysed by New York-based Human Rights Watch. And it is one of at least a dozen whose names have been erased.

“They intend that we do not return,” said religious leader Mohammed Rofiq, a former Chairman of a village close to Kan Kya who now lives in a refugee camp in Bangladesh, referring to the Myanmar Government. Mohammed Rofiq, a Rohingya refugee, poses for a picture in his home in Kutupalong refugee camp, in Cox’s Bazar, Bangladesh, August 8, 2020. Photo: Reuters/Stringer

The Ministry of Social Welfare, which oversees Myanmar’s rebuilding activities in Rakhine state, declined to answer questions from Reuters about the erasure of village names or the government’s policy concerning the return of Rohingya refugees. The Ministry referred questions to the General Administration Department (GAD), which did not respond.

A representative of the Myanmar government, led by State-counsellor Aung San Suu Kyi, also did not respond to a request for comment.

The United Nations’ map department has produced at least three maps since the start of the year that shows several Rohingya village names have disappeared or been reclassified by Myanmar.

The United Nations said it removed some maps of Rakhine state from its website in June and started a study to assess the impact of the government’s policies on villagers and returning refugees after the Arakan Rohingya National Organisation, a UK-based Rohingyarights group, complained to the United Nations about the removal of village names. The United Nations said the study has not reached any conclusion.

Yanghee Lee, a former U.N. human rights envoy to Myanmar, said the government was purposefully making it hard for refugees to return to places with no name and no evidence that they ever lived there. “This is a way of exterminating their basic identity,” she said.

Lee said the United Nations was complicit in allowing that to happen by not challenging the Myanmar government: “There hasn’t been any leadership that will say, ‘Wait a minute, the buck stops here, we’re not going to let this continue.’”

Several U.N. officials interviewed by Reuters declined to directly address why the United Nations had raised no objections or tried to stop it.

Stephane Dujarric, the spokesman for the U.N. Secretary-General Antonio Guterres, said the reclassification of some villages as wards was a “routine administrative procedure.” The U.N. mapping unit “utilizes the official government names of places to avoid confusion among aid workers and government officials in the field,” he said. “The standing U.N. practice worldwide is to employ officially designated place names for all publicly distributed maps and products.” 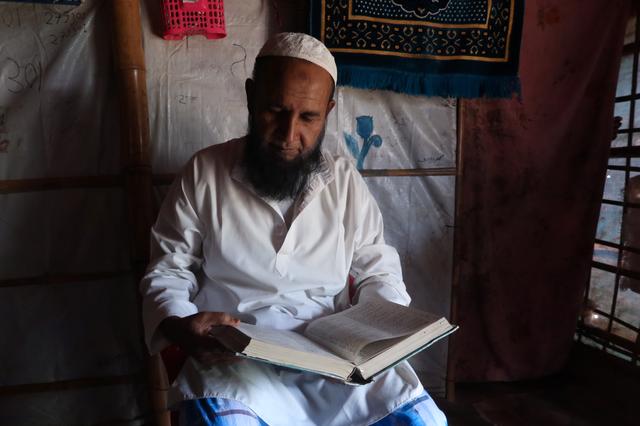 Dujarric said that changing the legal status of villages may become “an additional layer of complexity” in refugees reclaiming their former homes, without providing specifics.

Buddhist-majority Myanmar denies citizenship to Muslim Rohingya, whom many regards as interlopers from neighbouring Bangladesh despite their centuries-long presence in the country.

Myanmar has said it is open to the return of Rohingya refugees who fled the crackdown in 2017, but said it must be done through an orderly process.

Talks on that process between Myanmar and Bangladesh – where more than 1 million Rohingya live in refugee camps – have stalled. In recent months, the few dozen refugees who have tried to return have been arrested for illegal entry by Myanmar officials who cited concerns about refugees spreading the new coronavirus.

Satellite images were taken by Planet Labs, a San Francisco-based private satellite operator founded by former NASA scientists, and Google Earth show that Myanmar started building on the sites of at least a dozen destroyed villages soon after residents fled in 2017.

Myanmar is constructing bases for the security forces, buildings for government departments and homes for Buddhists, according to people in the area.

The satellite images show the base built on the site of Kan Kya doubled in size in the past year and two helipads were added. A new road has been built over the site of another razed village nearby called Gone Nar, which has also been reclassified as part of the expanded Maungdaw town.

A spokesman for the military did not respond to a request for comment on the building of security bases on the sites of destroyed Rohingya villages. Local officials could not be reached for comment.

In September 2019, an order by the GAD, part of the military-run Home Affairs Ministry, reclassified 16 villages, most of them former Rohingya, as wards of Maungdaw, according to the U.N. mapping unit in Myanmar.

Six of the village names were retained in the names of the new wards they were reclassified as belonging to, but 10 village names disappeared from the maps, according to the United Nations.

Five of these villages were destroyed in 2017. GAD figures show Rohingya, which it classifies as “foreigners” from Bangladesh, now account for about 60% of the Maungdaw population, compared with 93% in 2017, before the crackdown.

Hundreds of other destroyed villages have not had their names changed or erased, according to U.N. maps.

The United Nations said 11 other villages had been reclassified over the last five years as wards of a new town named Myin Hlut, where one Myanmar government minister has proposed a beach and seafood tourist area.

These small villages along the coast were mostly destroyed in the 2017 crackdown, though two remained intact until authorities bulldozed them in 2018. Six new guard stations with watchtowers have been erected in the area, according to a satellite imagery analyst at Amnesty International.

As the Rohingya villages disappeared from the maps, two villages for Buddhist settlers were added to U.N. maps in 2020. 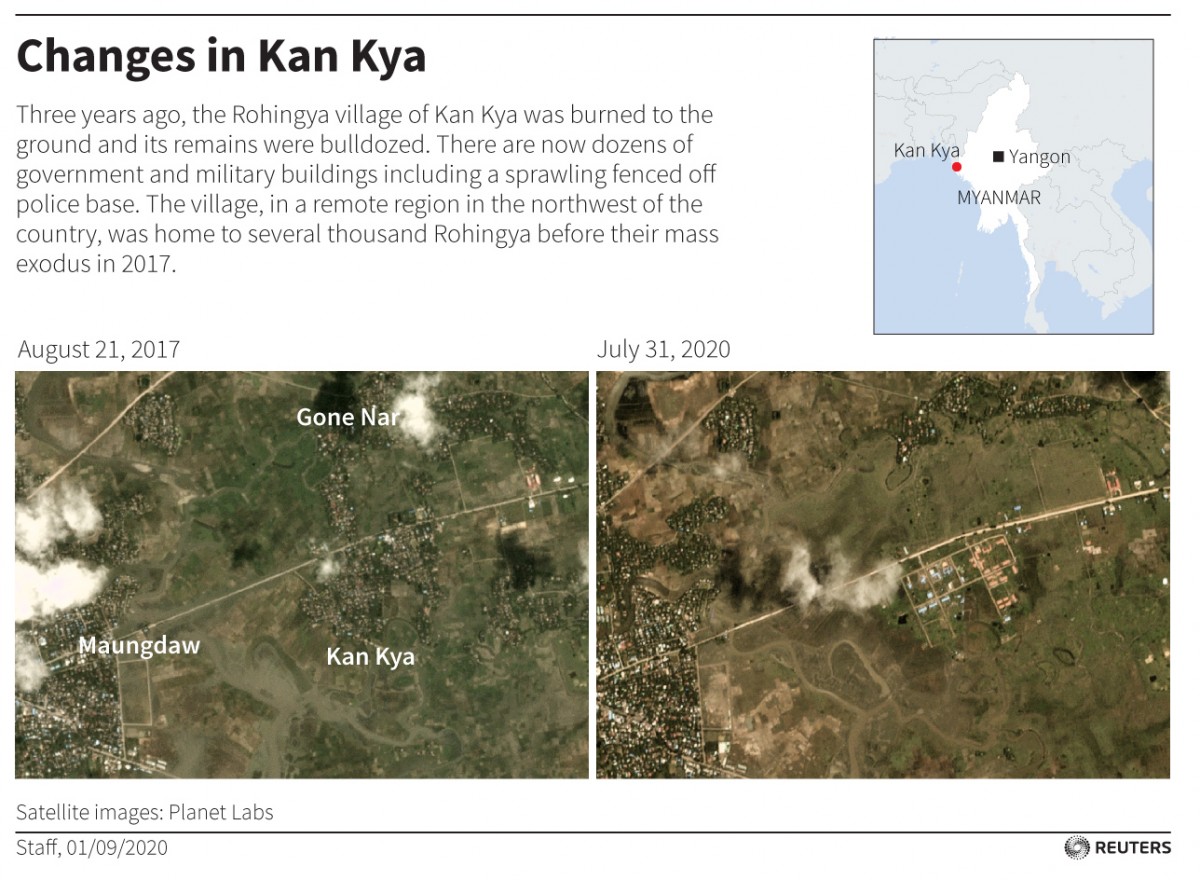 In Inn Din, a village where Myanmar soldiers killed 10 Muslim men in one incident during the 2017 crackdown, the 6,000 Rohingya people who lived there have all fled and their homes have been destroyed.

The Rakhine state government has built new dwellings for Buddhists in the area, Reuters reported in 2018. Satellite images show the site has expanded further since then, while in neighbouring Kyauk Pandu, a Rakhine Buddhist settlement has doubled in size.

Dujarric, the U.N. spokesman, noted that the International Court of Justice, which is investigating charges of genocide against Myanmar over the 2017 crackdown, has ordered the government to preserve any evidence related to the charges, which Myanmar has agreed to do.

A Bangladesh official with knowledge of the process of repatriating Rohingya refugees told Reuters that Myanmar showed no change in its policy towards the Rohingya.

In March, the official said, Myanmar sent to Bangladesh a list of names of 840 Rohingya it had approved to return to two areas in northern Rakhine: Hla Poe Kaung and Thet Kay Pin.

But the refugees were not from that area, the official said, and the list included single members from large families including women unlikely to travel alone.

A representative of Myanmar’s Ministry of Social Welfare told Reuters there were “some gaps in communications” between Myanmar and Bangladesh on the matter of returning refugees, which the representative blamed on the postponement of a meeting due to the coronavirus.

Satellite images of the areas to which Myanmar proposed they return showed one large settlement ringed by walls and watchtowers and a smaller one nearby. Both were built on top of razed Rohingya villages. Rohingya leaders have said they will return only to original village plots where they can build their own homes, not to camps.

In a closed-door address to the U.N. General Assembly last month, a transcript of which was seen by Reuters, the U.N. special envoy to Myanmar raised the issue of stalled repatriation of Rohingya refugees, saying “greater confidence-building measures” were needed to assuage refugee fears.

“It’s alarming,” said Jafar Ahmed, another former resident of the area. “I don’t know if we will ever get back our land.”