Activists point out that in some cases, the compensation being offered is even less than what the UP government disbursed following the 2013 Muzaffarnagar riots. 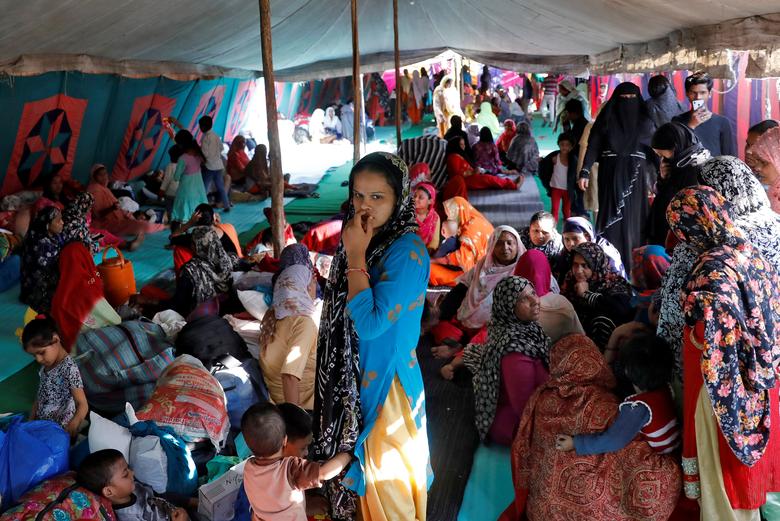 Muslims who fled their homes along with their families following Hindu-Muslim clashes triggered by a new citizenship law sit inside a relief camp in Mustafabad in the riot-affected northeast of New Delhi, March 3, 2020. Photo: Reuters/Anushree Fadnavis

New Delhi: A group of civil rights activists have urged Delhi chief minister Arvind Kejriwal to enhance the compensation for those killed or injured in the recent instances of North East Delhi violence. The activists have said that in many cases, the sums announced have been even less than what Uttar Pradesh government gave following the Muzaffarnagar riots of 2013.

The group has also urged for the inclusion of more categories of victims – like those who suffered sexual violence – and demanded that they be paid Rs 5 lakh in compensation.

They have also noted that the process of disbursing compensation has been slow and many of the victims have still not received any compensation. The government has been urged to make the process time-bound and ensure that all claims are settled within 30 days.

Compensation lower than what was offered in Muzaffarnagar

Through a letter sent on March 11, the activists – Farah Naqvi, Anjali Bhardwaj, Annie Raja, Harsh Mander, Apoorvanand, Anirban Bhattacharya and Amrita Johri – demanded enhanced ex gratia compensation to the next of kin of those killed. It said for the death of a major a sum of Rs 10 lakh was announced and considering that Rs 13 lakh was paid following Muzaffarnagar riots seven years ago, the sum should be enhanced to Rs 25 lakh keeping in mind the inflation and cost of living in an expensive urban metropolis like Delhi.

The activists also urged that compensation for other categories be enhanced accordingly. They said the ex gratia for the death of minors too should be raised to Rs 25 lakh from the Rs 5 lakh announced earlier since compensation for loss of life needs to be uniform.

Likewise, a higher compensation of Rs 8 lakh has been sought for permanent incapacitation; Rs 3 lakh for serious injury and Rs 30,000 for minor injury.

The activists also said in the case of a minor, the ex-gratia compensation should be released by way of a process worked out in consultation with the Delhi Commission for Protection of Child Rights.

The group also urged the creation of a new category of victims for the purpose of granting compensation. It said all forms of “sexual violence, recognised under the Indian Penal Code, including rape, assault or criminal force to outrage modesty or intent to disrobe, must be added to the categories of injury with a compensation amount of 5 lakh.”

Coming to the loss of property in the arson and violence, the activists said “the clarification of different compensation rates, according to degree of damage, and recognising floor-wise units for compensation of destroyed residential property is a welcome step towards developing compensation norms that respond to the tragic ground situation of survivors, by the Delhi government.”

However, they said an amendment to this order must specify the floor area for which these rates have been determined, and allow for flexibility and additional compensation, as warranted, on the basis of actual assessment of destroyed properties.

‘Increase compensation for loss of animals, vehicles to enable repurchase’

They also noted that when it came to loss of moveable property, only three types of moveable property and compensation amounts were mentioned in the order – namely Rs 5,000 for animals, including buffalo, cow, sheep, horses, camel and oxen; Rs 25,000 for normal rickshaw; and Rs 50,000 for e-rickshaw and e-scooties.

The CM has been requested to create additional categories covering motorbikes, cars, auto rickshaws, cycles, sewing machines, rehdis (thelas), and other categories based on ground assessment. The activists also pointed out that insurance policies for cars and motorbikes do not in most cases cover destruction during “riots” and urged Delhi government to meet this loss.

They also sought enhancing the amount for these losses bearing in mind the approximate current cost of the animals or vehicles as people may have to buy them again.

In the case of uninsured commercial property and articles, the activists said the order provides for only 50% of the loss up to a maximum of Rs 5 lakh. “There must be 100% compensation by the government,” they said and demanded removal of the cap.

Calling for an on-ground assessment of loss to the enterprises, they said the cost should be calculated at prevailing market rates.

The group has also asked for payment of compensation in “exceptional cases” such as families that were planning marriages of their daughters but their savings in this violence; workers who have been rendered jobless as their place of work were destroyed, looted or have shut down; and evicted tenants, who left following the violence.

The group has also urged Delhi government to release Rs 25,000 as daily survival cost for one month per affected family to meet costs of food, medicines, children’s needs and accommodation and for renewal of this amount to those families who are still unable to return to their homes at the end of 30 days from February 24.

The Kejriwal government has also been urged to streamline the procedures for disbursement of compensation and to make them time-bound.

Also watch: ‘Solicitor General Has Been Mischievous, I Stand by Every Word of My Speech’: Harsh Mander

The activists said these “must be clearly written and disseminated in the form of a leaflet by the government to all affected persons, whether in relief camps, or private homes. There is much anxiety and confusion on the ground on the process.”

‘No compensation even after two weeks for many families’

Stating that even after two weeks of violence many of the families have not received any compensation, they said the compensation assessment for loss to properties should be completed within 21 days of the submission of compensation claim form. Also, people should be allowed to appeal against the assessment within seven days and all disbursements should happen within 30 days of filing of claims.

Finally, it has been urged that people should be able to approach the Deputy CM’s office for resolution of any complaint, a designated officer should be appointed there and his number be widely publicised.