The Campaign has urged the state to initiate criminal proceedings in all cases of violence and demanded delinking of Aadhaar from all public services. 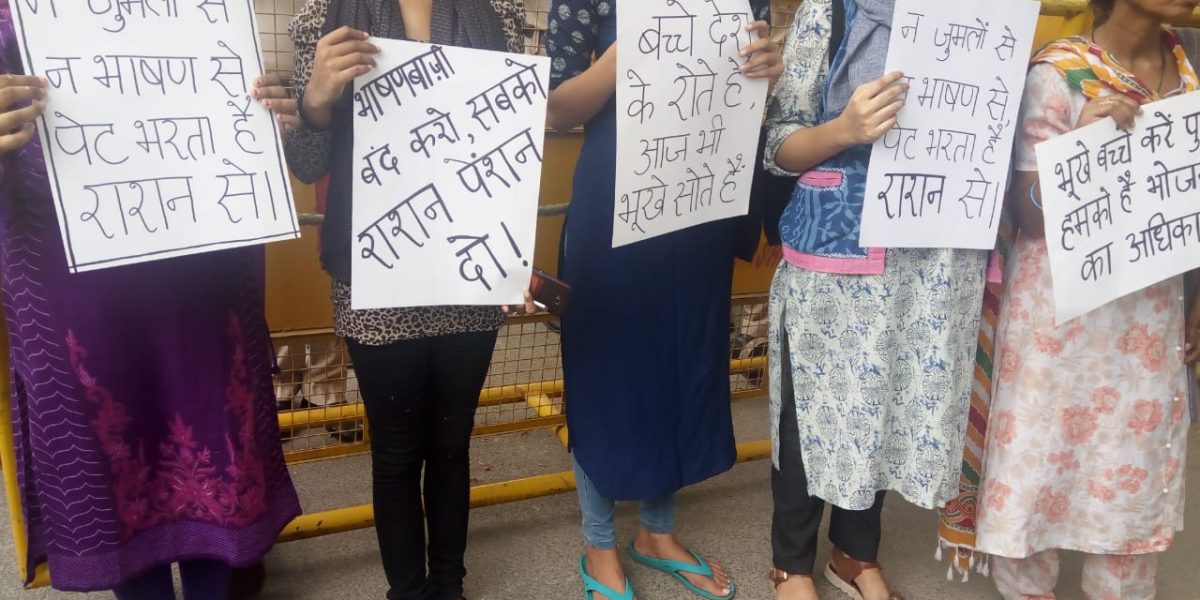 New Delhi: The Right to Food Campaign today staged a protest at Jharkhand Bhavan in the national capital to protest against the recent spate of alleged starvation deaths and lynchings in the state. It later submitted a memorandum to the resident commissioner, demanding among other things “criminal proceedings against all persons responsible for starvation deaths, lynchings and other incidences of violence.”

Activists held up posters with details of the starvation victims and demanded the release of rations and pension to all deserving people.

The Campaign later submitted a memorandum to resident commissioner of Jharkhand, D.K. Tiwari, in which it criticised the “lack of government action on growing attacks on right to life in Jharkhand”.

Thirteen succumbed to hunger, 13 have been lynched

The memorandum noted that over the past two years, at least 13 persons have succumbed to hunger and 13 others have been lynched in the state. It lamented that “the state government has done little to take action against those responsible for these deaths or ensure that such incidents do not occur in future.”

Averring that the denial of social and economic entitlements worsened the destitution of families those who reportedly starved to death, the memorandum added that in at least seven cases, Aadhaar-related failures were directly responsible for the denial of these entitlements.

“Four of the victims’ families did not have a ration card. Eleven-year-old Santoshi Kumari’s family was denied its public distribution system rice as its ration card was cancelled for not being linked with Aadhaar,” the complaint note said, reminding the official how following the March 2017 order of Jharkhand’s chief secretary, about 11 lakh such ration cards were cancelled in the state. Activists held posters with the details of the starvation victims and demanded release of rations and pension to all the deserving people. Credit: Right to Food Campaign

It further added that three persons starved to death due to the failure of Aadhaar-based biometric authentication (ABBA).

“Premani Kunwar’s pension was redirected to someone else’s bank account linked with her Aadhaar. In the month of Etwariya Devi’s death, the Common Service Point operator did not give her the pension as the internet connection was allegedly disrupted just after she authenticated through ABBA. Savitri Devi’s pension was sanctioned in 2014, but she received its first installment only in April 2018 as her bank account was not linked with Aadhaar. Absence of work under the National Rural Employment Guarantee Act also exacerbated the poverty of the starvation victims’ families,” the memorandum stated.

The protesters also accused the government of apathy. “Instead of taking action against functionaries whose lapses have led to these deaths and measures to improve food security in the state, Jharkhand government has denied hunger as the cause of these deaths and has absolved itself of any blame,” they said.

Further, they accused the state food minister of making a series of “fallacious claims and accusations against activists who are highlighting the gross violations of right to food in Jharkhand”.

‘Grain banks will not succeed, direct benefit transfer scheme pilot should be stopped’

The memorandum also said that the proposal of establishing grain banks will fail to ensure food security as a matter of right. “The continuation of the ill-conceived direct benefit transfer (DBT) for food security pilot in Nagri block of Ranchi is also highly condemnable. Despite people’s overwhelming preference for the earlier system of purchasing rice at the rate of Re 1 from the ration shop, this pilot is yet to be stopped,” it stated.

Referring to the recent spate of lynchings, the Campaign said: “Among the 13 persons lynched in Jharkhand since March 2016, ten were Muslim, two Hindu and one Adivasi.” Apart from these deaths, it said, there have been various other incidents of communal violence.

In light of the issues plaguing the state, the Campaign has demanded criminal proceedings against all persons responsible for starvation deaths, lynchings and other incidents of violence. It has also called for activating the grievance redress system provisions of the National Food Security Act; universalisation of the public distribution system and social security pensions; making Antyodaya ration cards for all single women and particularly vulnerable tribal groups; and inclusion of subsidised pulses and edible oil in the PDS.

Most importantly, the Campaign has called for “delinking of Aadhaar from all public services” and immediate withdrawal of the “DBT for food security” pilot in Nagri in favour of the earlier system of rice distribution.