The Republic at 71: Faced With an Unbending Government, Indians Continue to Speak Out

Could the repression now be worse than it was in 1975? Those who have resisted have been subjected to the full force of the law and more. 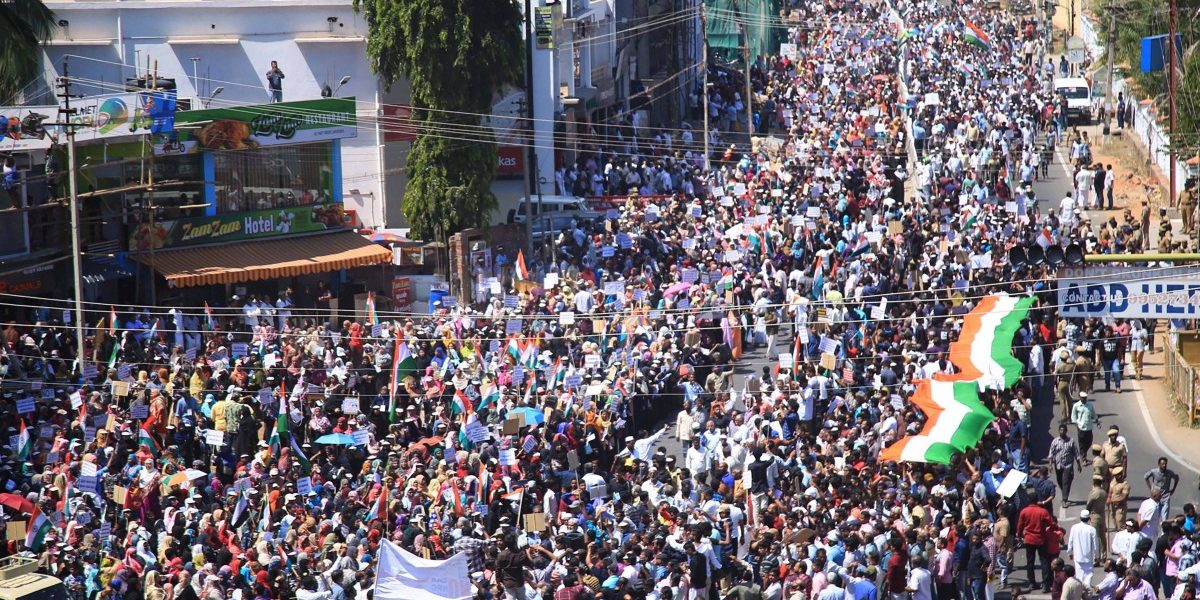 Protests against the Citizenship (Amendment) Act in Kanyakumari. Photo: PTI

A respected woman social activist and political leader beaten and kicked in the stomach at a police station for recording a public protest. A human rights lawyer arbitrarily detained and given electric shocks by police officers. A journalist covering public demonstrations for a prominent national newspaper taken to a police station, subjected to obscene slurs by the police while witnessing a social activist being badly beaten-up.

Police stand by as an organised mob of masked goons attack students of a premier Left-leaning university in the dead of the night. Blanket institution of highly questionable criminal cases, indiscriminate arrests, caning and use of live ammunition with lethal effect on protestors. This is not the image of their country that Indians at home and abroad want to project  to the world.

Nonetheless, many across the world are watching events unfold in the country with dismay. This Republic Day, India’s political leadership should be celebrating 71 years since the adoption of the constitution. Instead, the ruling Bharatiya Janata Party (BJP) government is preoccupied with justifying flawed amendments to the Citizenship Act that exclude Muslims and have been described by the UN as ‘fundamentally discriminatory’. The constitution’s promise of justice, liberty, equality and fraternity is being tested by injecting religion into the discourse around who gets to be an Indian citizen.

With attempts underway to crush largely peaceful nationwide mass mobilisations, the present appears to be reminiscent of the time when Indira Gandhi suspended certain constitutional rights by declaring a national Emergency from 1975-1977. Then as now, people from all walks of life and across the country came out to protest in large numbers in the tradition of satyagraha.

Could the repression now be worse than it was in 1975? Those who have resisted have been subjected to the full force of the law and more. Over 25 people have been killed in the protests. Unspecified numbers have been detained while many have been dubiously booked for “rioting”. They will face judicial harassment for extended periods of time as the wheels of justice grind slowly in India.

Random disruption of internet services to prevent public mobilisations and routine invocation of the regressive colonial era Section 144 of the Criminal Procedure Code to disallow five or more people from gathering in public places is tarnishing India’s global reputation as a stable democracy. The recently released Economist 2019 Democracy Index has noted a sharp decline in civil liberties in the country.

To be clear, the chaos and cruelty currently unleashed have been brewing for a while. Last December, prior to the ongoing nationwide protests and the ensuing crackdown, the CIVICUS Monitor, a research platform that measures the state of civic freedoms in every country, downgraded India to the second worst category, ‘repressed’, placing it on par with Afghanistan, Bangladesh, Myanmar and Pakistan. Reasons for the downgrade included a months’ long clampdown on public gatherings and internet freedom in Jammu and Kashmir, muzzling of the media and gross intimidation of civil society activists and their organisations through selective invocation of security and criminal legislation to silence criticism.

Notably, mass mobilisations are an opportunity for ordinary people to get their voices heard and for the political leadership to course correct in between election cycles. Governments can take a reform-minded approach and make necessary changes in line with public demands or they can take an unbending undemocratic approach, spread disinformation and clampdown. The launch of the disingenuous hashtag called #IndiaSupportsCAA along with the marshalling of the country’s diplomats to justify the ruling party’s position with foreign governments raises further concerns about the politicisation of national institutions.

Nonetheless, another course of action is available to the government: to back down and take corrective action. In Chile last year when massive public protests rocked the country against neoliberal economic policies, the government of President Sebastian Pinera agreed to hold a constitutional referendum. In Ecuador, President Lenin Morera reached a deal with indigenous leaders to cancel an austerity package following weeks of protests. In Lebanon, bowing to public dissatisfaction with official corruption, poor public services and economic mismanagement, Prime Minister Saad Hariri tendered his resignation. Even China, in the face of mass protests by residents of Hong Kong backtracked on a controversial extradition law albeit after strong-arm tactics failed to deter protestors.

Prime Minister Narendra Modi’s promise of Sabka Saath Sabka Vikas rings hollow in the face of an economic downturn and the ramping up of emotive politics of religion. But India’s youth are inspiring hope. Thousands of young people cutting across religious and caste divides are leading the way by becoming politically active on social media and on the streets, raising hopes that India’s democracy will ultimately emerge stronger.

Many are finding their voice in speaking out against the muzzling of protest against hate filled politics, rightly calling for a return to the values of democratic dissent and debate that define being Indian. Notably, women have come out in large numbers. Several are leading the protests. In expressing their indignation against attempts at institutional discrimination they are eroding patriarchy along the way.

The government of the day may have failed to honour Mahatma Gandhi’s legacy of communal harmony and peaceful resistance against oppression. However, this Republic Day conscientious Indians around the world are speaking out against the present injustices and are being the change they wish to see.