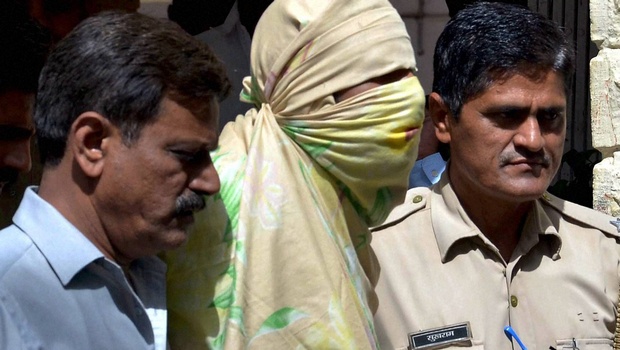 File photo from 2014 of the Delhi Police Special Cell with a man alleged to be an Indian Mujahideen operative. Credit: PTI

New Delhi: Concerned by the fact that little has changed since its  2012 report,  Framed, Damned, Acquitted: Dossiers of a `very’ Special Cell, on the functioning of the elite Delhi Police anti-terror cell, the Jamia Teachers’ Solidarity Association has now come out with a second edition containing eight new cases. The report, released on October 7, draws largely on court records and judgments to allege that the Special Cell has resorted to fabrication of evidence and the framing of suspects in the name of fighting terrorism.

On the cover of the report itself, the JTSA mentions that what it still finds “most troublesome is the reign of impunity the Special Cell enjoys despite mounting evidence of its flagrant wrong-doings”. The new report buttresses its argument by giving a detailed account of 16 previous cases and eight new ones – including the Lajpat Nagar blast case of May 21, 1996 in which 13 people were killed. In this case, while the trial court had acquitted two of the 10 accused, it had convicted four under the Explosives Substance Act. However, they were let off as they had already served 14 years as undertrials. The remaining four were convicted of terrorism and of them three were awarded the death sentence while one was given a life term.

But the High Court, which came a few months after the first report of JTSA was released in 2012, acquitted two of the four – Mirza Nissar Hussain and Mohammad Ali Bhatt – of all charges. It converted Mohammad Naushad’s death penalty to life term while upholding the life sentence given to Javed Ahmad.

The JTSA said the HC found a number of anomalies in the way the investigation was carried out. The court questioned “the nature and truthfulness of the evidence produced”, it said, adding that the judges noticed shortcomings in the police not being able to produce records of its travels during the investigation, in not producing records of alleged telephone calls made by one of the accused, Mirza Nissar Hussain to another, Latif Ahmed, on May 19, 1996; and in not carrying out a Test Identification Parade (TIP) of the case property or the accused persons.

In their judgment, Justice S. Ravindra Bhatt and Justice G.P. Mittal noted that “in grave and serious crimes, which undermine the safety of the citizens and pose a threat to the wellbeing of society at large, where the prosecution alleges some individuals to be accused, it has (as noticed earlier) a solemn duty to discharge, by ensuring that minimum standards or proof required of in a criminal trial, are satisfied. In this case, unfortunately, the police has shown casualness . . . It needs to be emphasised that the flaw is not in the law, or the standard of proof, which has, and will remain proof ‘beyond reasonable doubt’ but in its understanding and implementation by the police force.”

The JTSA has also pointed out how Mohammad Hussain, who along with three others, was accused of carrying out a blast in a bus at Rampura bus stand near Punjabi Bagh police station in West Delhi on December 30, 1997, was convicted by the lower court.

The police case was that Hussain, a Pakistani national, had boarded the bus from Paharganj and was carrying a rexine bag in his hand, which was not there in his hand when he alighted at Karol Bagh. The blast happened soon after, killing four and injuring 24 others.

His conviction was upheld by the High Court, but the Supreme Court had subsequently directed a trial from the stage of de novo prosecution evidence. The case was then committed to the court of Additional Sessions Judge Pawan Kumar Jain and Rajesh Anand was appointed the amicus curiae.

The court, while acquitting Hussain, observed that the prosecution had failed to prove his guilt beyond the shadow of all reasonable doubts. It also directed that a copy of the judgment be sent to the “Commissioner of Police with a hope and trust that courts will not encounter such type of lapses in future and to enable him to take appropriate action as he deems fit.”

Case of zoology student from Kashmir

In the other six new cases, which JTSA pointed out, all the accused were nabbed on mere suspicion of their planning a terror activity.

In particular, it pointed out how in the case of Parvez Ahmad Radoo, son of Professor Sanaullah Radoo, principal of a college in Sopore, Jammu and Kashmir, there was even a media trial after he was arrested from Delhi’s Indira Gandhi International Airport on September 12, 2006.

Pervez was a postgraduate in zoology and was working as a research assistant for a renowned scientist in Pune. He had received a scholarship to pursue his PhD in South Korea. He was on his way to catch a flight to Pune where he was to take the TOEFL examination as part of his PhD admissions process when he was arrested.

Subsequently, JTSA said, he was brought to the Lodhi Colony Special Cell office. Pervez, who even got a character certificate from State of Jammu and Kashmir, alleged that he was ‘tortured and interrogated severely’ and was ‘beaten up ruthlessly’ and given ‘electric shocks’. This went on for over a month.

The court later held that the defence of Parvez was more reliable than state’s arguments. “State failed in linking a sincere, law abiding youngster with a banned militant organisation and thus, like in many other cases, stood exposed,” said JTSA.

In view of such repeated cases of alleged “framing and fabrication”, the JTSA has demanded that a National Commission of Enquiry be established to document and investigate such cases across the country; a comprehensive rehabilitation package, including assistance in education and occupation, should be devised and announced for those wrongfully incarcerated on false charges; and compensation be paid to the victims of false prosecution.

It has demanded that “a public apology by the government and the investigating agency must be tendered to those who have suffered wrongful arrests, prosecution and incarceration”. It has also demanded action against officers involved in frame ups and that the Special Cell be disbanded.

Since most of the accused had alleged torture, the report also demands that the present Prevention of Torture Bill be scrapped and replaced with a new bill in conformity with the Convention against Torture. Finally, it has sought that all intelligence agencies be brought under the purview of parliamentary oversight.

The JTSA said its 2012 report was perhaps the first time systematic evidence had been presented to show that the Special Cell had been indulging in fabricating evidence, planting evidence, flouting procedural safeguards, manufacturing terror threats and terrorists. The first report was a study of 16 cases – 15 of which were investigated and prosecuted by the Special Cell – through trial records and court documents.

In its response to the allegations, the Delhi Police had denied the existence of any frame-ups. Following a report by this writer in The Hindu in 2012, the Delhi Police had stated: “The job of an investigating agency is to investigate cases, collect evidence and present it before courts of law for evaluation… During the trial, specially in terror related cases, the judicial scrutiny is of a considerably stringent level, and rightly so. Guilt must be proven beyond reasonable doubt. Also, there are very few public witnesses who come forward to depose before the court for fear of reprisal later. Therefore, if a case ends in acquittal, the blame is not only at the doorstep of the investigating agency.”

Since then, the JTSA report says nothing has changed on the ground. It says that the police claim that members of the public are unwilling to depose before the court because of the fear of reprisals was not correct. It noted that a court had observed in the case (No. 6 in the Report) of State versus Irshad Ahmad Malik that that any effort to enlist independent witnesses “was omitted by the police deliberately”.

JTSA has also questioned whey even when many of the arrests are ostensibly made at railway stations and metro stations by the Special Cell, railway officials are not attached in the operations. Similarly, in cases where the accused are shown to be picked up from lodges, guest houses and rented accommodations, their staff members or managers are not made public witnesses.

The report also observed how the Delhi Police had claimed after the first report that “six cases out of 16 referred to in the compilation have actually ended in conviction, while one case is still pending trial … Of the eight cases which ended in acquittal, in five cases our appeals are pending against the order of the trial court before the High Court of Delhi.”

But, it said, in all of these 16 cases cited in the first edition of the report, the police had been able to secure convictions on terror charges in only one case and that too partially.

Pointing out that most of those accused by the Special Cell are free men today, JTSA wondered: “But will there be any accounting for those lost years? For the humiliation and indignities suffered? For the torture and illegal detention? If justice is to truly prevail, those responsible must certainly be held accountable.”