After Multiple Incidents of Racial Attacks in Noida, Africans Live in Fear and Uncertainty

At least nine Africans have been seriously injured in multiple attacks over the last two days. 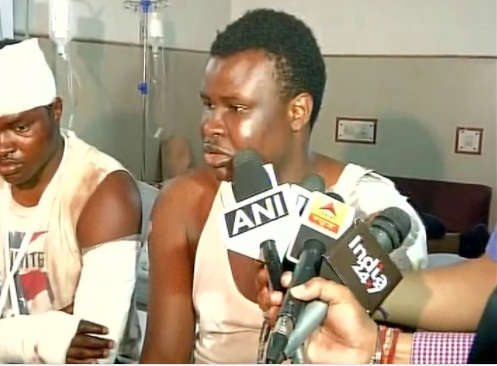 Nigerians who were attacked in Noida. Credit: ANI/Twitter

New Delhi: Ever since a teenager in Noida died of an alleged drug overdose, Africans living in the area have been facing violence and abuse, with at least nine people seriously injured in racial attacks. The incidents began after the death of 16-year-old Manish Khari due to a drug overdose. According to reports, people assumed that the drugs were given to Khari by his five Nigerian neighbours. The five were detained and then let off by the police because of a lack of evidence, according to a Times Now report. Before Khari was found alive, a protest taken out by residents in the area had also accused the Nigerians of cannibalism, according to a report in Scroll.in. Khari died in hospital on Sunday (March 26).

Groups of African students were beaten by mobs in at least two separate incidents on Monday, according to reports. A video posted on Facebook by the Association of African Students in India (AASI) shows an African being beaten by a mob in Noida’s Ansal Plaza mall.

“I went to the mall when the attack happened there were hundreds beating me up with sticks and something made of metal. No one helped us,” Endurance, a student, told India Today.

“I tried hard to stop them. We received a message on our foreign students WhatsApp group asking us to go home immediately because we were in danger. We ran from Ansal Plaza but no auto agreed to take us. Then we went back in and tried to enter stores. The store owners threw us out. After we were beaten we hid for half an hour before the police came and helped,” another student, Precious, added.

AASI has also asked all Africans in the area to stay indoors till protection is provided and the environment is safer. In a press conference on March 28, Presidoe Okugeni, PR head of AASI stressed the need to sensitise both communities and create channels of communication. “When you go ahead with your perception and make a deduction about someone, it’s really unfair. The reasons for these mob attacks are because of this stereotypes that are out there, and this really needs to stop,” he said.

According to a Hindustan Times report, a candlelight vigil for Khari at Noida’s Pari Chowk turned violent on Sunday night, when they saw seven Africans shopping in the area. Police arrested five people for the racial attack, the report said.

Two other Nigerians were attacked on Monday evening, according to a report in the Telegraph, by three masked men on a motorcycle. The victims were admitted to Sharda Hospital for treatment. The precise number of attacks is yet to be ascertained.

AASI president Samuel Jack, on March 28, said, “Firstly, the government of India should take proper steps to protect the lives of African students in India. Secondly, we’re calling on the government to compensate all damages that has been caused as a result of this mob attack on African students. And totally, we’re calling for justice and a fair hearing on this particular case. The locals need to be sensitised. We have seen seminars and talks, but what we want is implementation. How do they expect outside cooperation, how are we supposed to understand the Indian psyche, do business with Indian people when we cannot engage with the locals.”

Okugeni added at the press conference, “We use this medium to speak to the minister of external affairs to take a drastic measures that would curb the situation. We can’t take this anymore. If we continue to be treated this way then India is no more a safe study destination. If this continues then there is a need for a boycott, to prevent African students from coming to India.”

External affairs minister Sushma Swaraj said she had spoken to Uttar Pradesh chief minister Adityanath about the incident and he had promised a fair investigation.

I have spoken to Yogi Adityanath ji Chief Minister of Uttar Pradesh about attack on African students in Greater Noida. /1

He has assured that there will be a fair and impartial investigation into this unfortunate incident. /2

In the evening, MEA spokesperson Gopal Baglay added that the minister of state for external affairs M.J. Akbar also spoke to the Nigerian high commission’s acting head of mission to provide information about the steps being taken by local authorities for the safety and security of Nigerian nationals.

“The government is committed to ensuring safety and security of all foreigners in India. People from Africa, including students and youth, remain our valued partners,” the MEA spokesperson assured.

Meanwhile, Africans living in the area, quoted in media reports as well as on social media, have expressed fear and uncertainty.

Though shocking, these incidents are not completely unprecedented. Africans living in India have often expressed the racism they face in everyday life – while using public transport, from landlords, from neighbours and so on. Brutal racial attacks have also been recently reported from Bangalore and Delhi.