At least 30 were arrested as the state police stopped protestors from reaching Mohali for a mass rally. 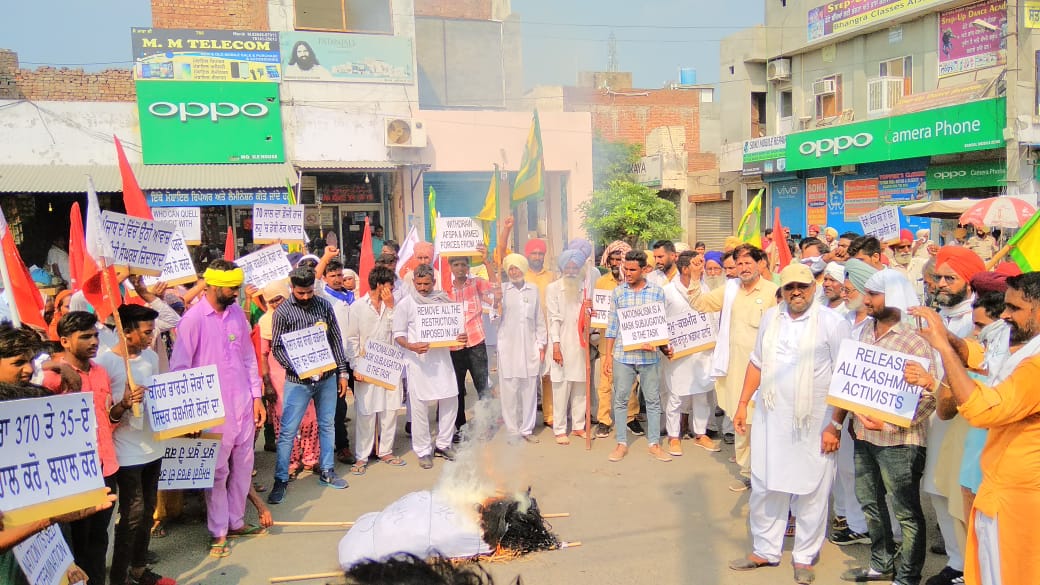 A protest in Punjab's Bathinda district in support of the people of Kashmir. Photo: Special arrangement

New Delhi: Thousands held dharnas (protest sit-in) and burnt effigies of Prime Minister Narendra Modi at different places in Punjab on Sunday after being stopped by the state police from going to Chandigarh for their scheduled rally in solidarity with Kashmiris, who have been under a clampdown for over 40 days.

At least 30 activists, including ten women, from different farmers’ and students’ unions, were also arrested in Mohali as the Congress government of chief minister Amarinder Singh thwarted all attempts to hold a protest march.

These Left-leaning groups had drafted a memorandum for Punjab governor V.P. Singh Badnore demanding the restoration of Articles 370 and 35A, the right to self-determination for the people of Kashmir and the immediate withdrawal of the Armed Forces (Special Powers) Act.

The state’s decision to deter protestors from reaching Mohali, however, backfired with thousands holding dharnas wherever they were stopped. 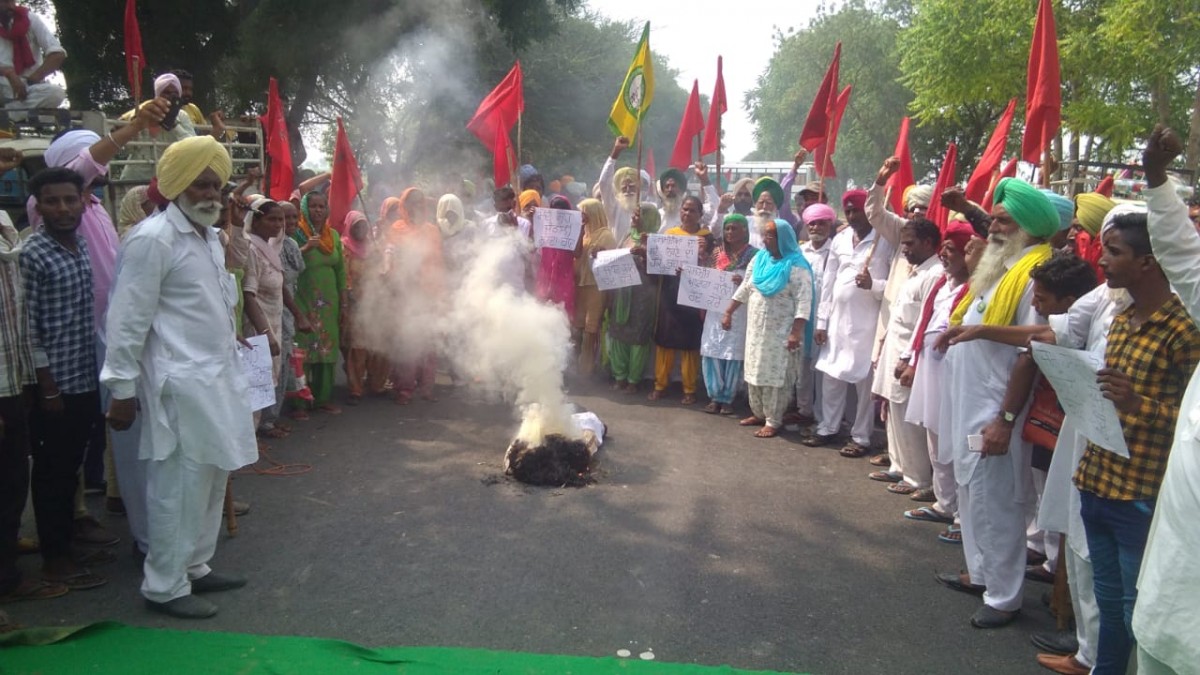 PM Narendra Modi’s effigy burnt in Muktsar. Protestors were demanding the restoration of Articles 370 and 35A, and immediate withdrawal of the armed forces from the Kashmir Valley. Photo: Special arrangement

These sit-ins were held mainly in the south of Punjab across Bathinda, Mansa, Faridkot, Muktsar, Sangrur, Ferozepur and Barnala districts, besides Mohali and Tarn Taran where protestors also burnt the prime minister’s effigies.

“The manner in which the Indian government annulled Articles 370 and 35A in parliament is a violation of the Indian constitution and that of the parliamentary democracy. [It is a] violation of the human rights of the people of Kashmir,” said Gandhian peace activist Himanshu Kumar. He addressed the media in Mohali after the police disallowed the protest march.

“This act of the Indian government is much bigger an attack on the people than [any] during the days of the Emergency,” he added. 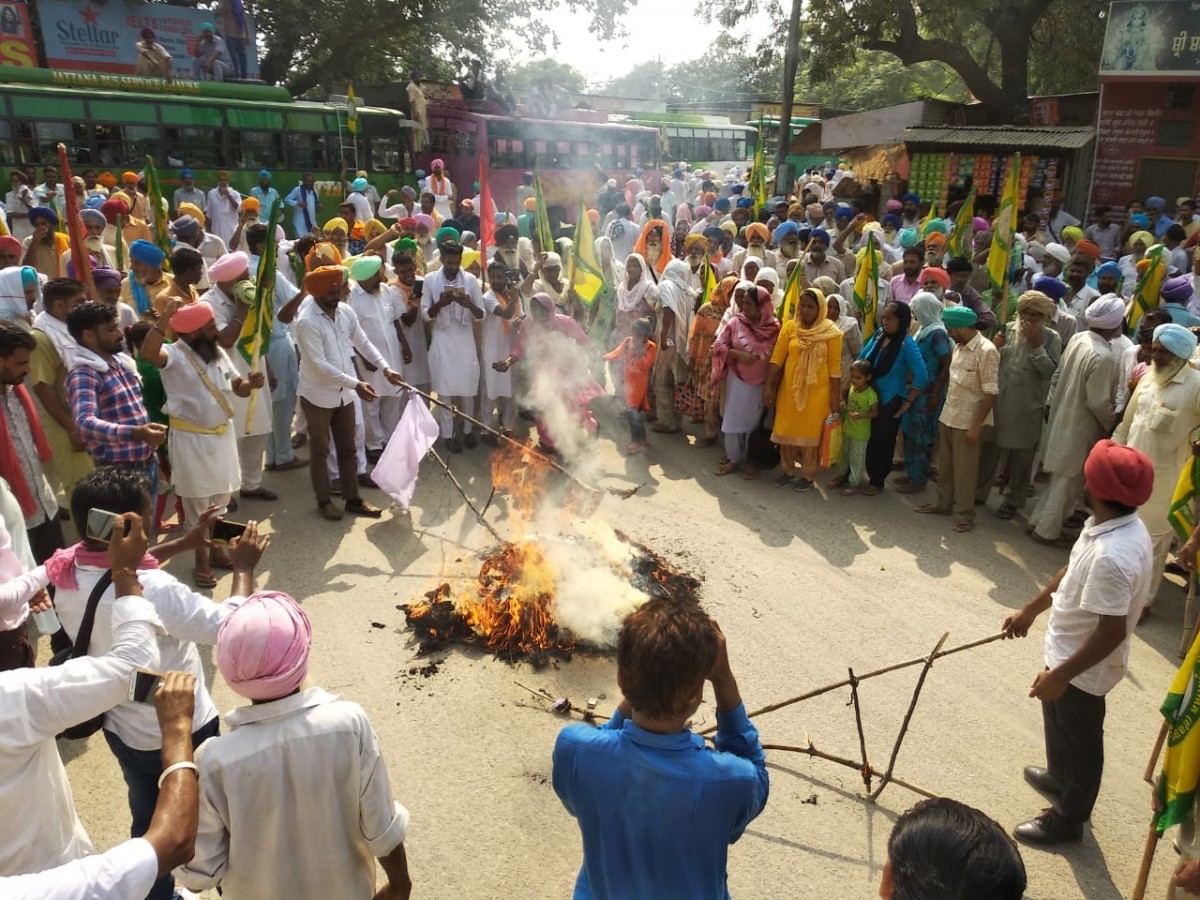 Such protests were held at 23 places in 11 districts after Punjab police thwarted the March to Chandigarh in Mohali. Photo: Special arrangement

The Punjab and Haryana high court, while hearing  a public interest litigation (PIL) against the protest march in Chandigarh, had on Friday directed the Punjab police “to connect and liaison with the district authorities, within the State of Punjab and UT Chandigarh, to work in tandem and complete co-ordination to take all possible measures permissible in law to ensure that the peace and tranquillity within the State and the U.T. Chandigarh is not disturbed”.

The court also sought assurance from the police that “those planning the agitations are not successful in taking the law into their hands and disturb the public order”.

The Punjab police is now required to submit its compliance report in accordance with the high court dictates by September 20, the next date of hearing in the PIL.