How Kashmiris, Those Criticising BJP After Pulwama Are Being Targeted in Bengal

Civil society activists, even as they despair about the deepening crisis, are joining together to offer support. A protest against the Pulwama terror attack. Credit: PTI

Kolkata: West Bengal is on edge. The communal tension simmering in the state over the last four years seems to have reached a new threshold following the recent deaths of 40 CRPF personnel in Kashmir’s Pulwama.

Some key questions coming to the fore at this critical hour are: Will Bengal, which prides itself on having protected its minority community for over three decades, finally cave under the mounting pressure of a resurgent Bharatiya Janata Party (BJP)? Or will the state hold its own and push back the rising political current of communalisation?

Over the past few days, Bengal has witnessed several incidents bringing in their trail both hope and despair. In one case, a Kashmiri doctor, heckled and harassed in the charged aftermath of Pulwama killings, got immediate police protection. Civil society members also rushed to be with him and express their solidarity.

“Last Saturday evening, I received a call from Kavita Krishnan asking me to probe an incident of harassment of a Kashmiri doctor,” said Suman Sengupta, an engineer at Ballygunge Science College. Sengupta then contacted his friend Shamim Ahmed to decide on how to help the doctor. Ahmed is an associate professor and head of the philosophy department at Ramakrishna Mission Vidyamandira, Belur.

Seated in Ballygunge Science College’s canteen, the two narrate their interventions in the incident. Active civil society members, both are deeply anxious over the way Kolkata in specific and Bengal, in general, seem to be getting sucked into a communal vortex.

“As soon as I heard about the incident, I got in touch with some senior police officials in Kolkata. On a call from the police headquarters in Lalbazar, the officer in charge of the local police station posted police personnel at the doctor’s residence. When we [Ahmed, Sengupta and Amit Dasgupta, retired professor of economics and Zoheb Islam, a school teacher] reached his residence, we found the police keeping guard there.”

The sudden viciousness of the attack has demoralised the Kashmiri doctor who has lived in the city for over two decades. To him, Kolkata has always been the city of love and peace – until the attacks.

“One reason the incident was contained was because of the alacrity of the police action. Later, Nabanna, the administrative headquarters of Bengal government, also got in touch with the doctor,” he said.

But the police, according to Ahmed and Sengupta, are often known to be slow to act. “They allow tensions to simmer but intervene just when it may seem to spin out of control.” The incident with the Kashmiri doctor validates the effectiveness of fast administrative and police action in keeping perpetrators of violence in check.

In tandem with the rest of the country, Kolkata and districts across Bengal have witnessed aggressive processions in recent days. “I found that most of the rallyists, boys and girls, were between 15 and 20 years of age. And they were mostly from lower economic and social sections,” said Ahmed. The slogans starting with “Pakistan murdabad”, usually end with “Modi zindabad ek hi nara, ek hi nara, Jai Shri Ram sahara”.

The anxieties further deepen with the vicious targeting of people for social media posts critical of the way the Pulwama incident is being used to whet peoples’ appetite for hyper-nationalism.

For instance, Chitradip Som, a teacher in Delhi Public School, north Kolkata, did not anticipate the violence that came his way following one of his Facebook posts. In this post, Som questioned why the defence ministry was describing the slain policemen as martyrs since they were not killed in a war. He further quoted a link from the defence ministry in which he said the ministry described such deaths as battle casualties.

On February 16, at 1:30 pm, a 30-member-strong mob descended on his house in Bongaon. After his family informed them that Som was not at home, the men tried breaking down the door. The hammering and pounding forced him to come out. They asked him to apologise, which Som did. He was also forced to say ‘Bharat Mata ki jai’.

But matters did not end here. On getting information of more imminent attacks being planned, Som left Bongaon. He is now staying at his flat in Kolkata. His family’s travails did not end with here. A 200-person strong mob landed up at his Bongaon home and vandalised it.

On February 18, the school forced Som to resign from his post.

“As the management of DPS Kolkata, we deeply condemn the act of Chitradip Som. We are very proud of our armed forces and the sacrifices they make for us. We, as an educational institute, do not endorse the views of Chitradip Som in any form and have taken punitive action against the concerned person. And as such Shri Chitradip Som has resigned from our school,” a management circular stated. A copy of the order issued by DPS, North Kolkata

In yet another incident, Krishnendu Sengupta, an assistant at LIC of India, Asansol, was sacked and had an FIR lodged against him. His offence: a Facebook post in which he held the BJP “responsible” for the deaths of the CRPF men. 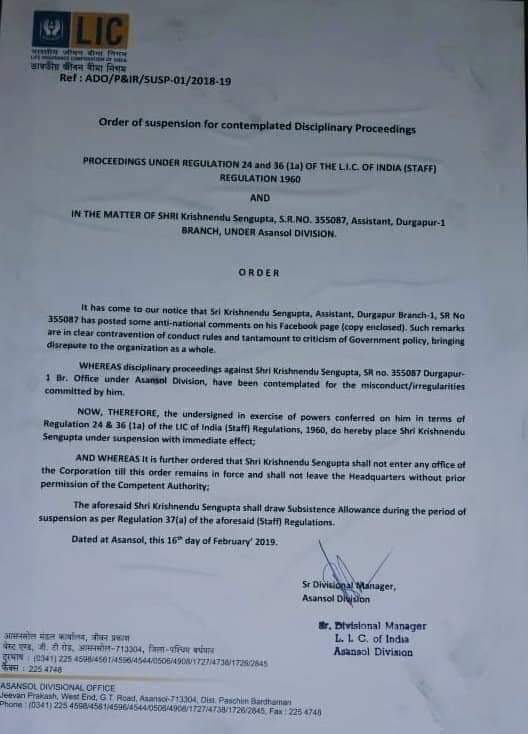 Copy of the order issued by LIC.

LGBT activist Abhishek was campaigning in the city urging people to not view the Pulwama violence through a communal prism. Instead, he argued, the killings should be regarded as nothing but a heinous terror attack. Soon after his campaign got underway, a mob of 30-40 men ambushed his house. “Telling his mother that Abhishek was moving around the streets with a Pakistani flag, the mob told her to throw him out of the house. Since the incident, Abhishek hasn’t been able to return home. He is living with a friend,” said Ahmed.

Civil society activists, even as they despair about the deepening crisis, are planning a range of initiatives in the coming days. Initiatives of organisations like shohomon (Togetherness), members of theatre groups, and LGBTQ groups, are opening their homes to Kashmiris. “There are some signs of optimism,” said Sengupta with a wry smile.

Bikash Bhattacharya, a prominent lawyer in Kolkata high court has offered to fight sedition cases pro bono. “This is the right time to come together, save mohallas, across all political parties,” he said.