A report by People’s Union for Civil Liberties said the “brutal military methods” had only alienated the people who have lost faith in the democratic institution since complaints of excessive force had not been registered or properly acted upon. 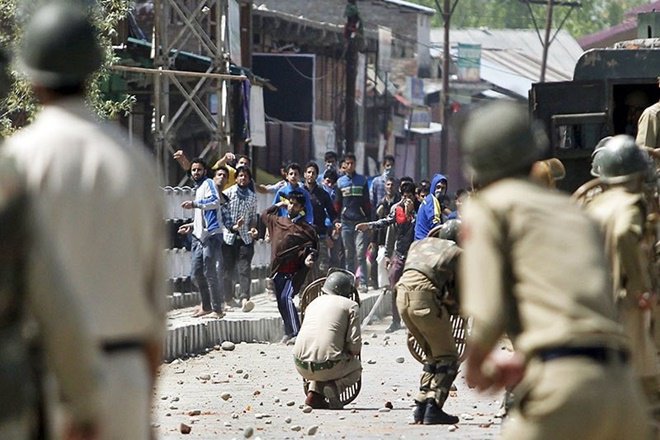 The PUCL report stated that brutal military methods in Kashmir had only resulted in alienating the local population. Credit: Reuters

Feeling “devastated by the scale of all round human suffering it witnessed in Kashmir,” a fact-finding team of the People’s Union for Civil Liberties (PUCL) that visited the strife-torn state from October 14-22, has in its report called upon the government of India to urgently revise its “militaristic policy” and urged the Indian leaders to “demonstrate greater statesmanship in dealing with the Kashmir issue.”

The team, led by PUCL General Secretary V. Suresh, has also urged the leadership to recognise the political aspirations of the people of Kashmir and chart a policy that ensures the “welfare, well-being, rights and dignity of the Kashmiri people.”

As a first step, it has demanded that the government initiate confidence-building measures to build a sense of trust and confidence among the ordinary residents of Kashmir.

The PUCL team visited the injured and the families of the deceased in various districts of the Valley and interacted with human rights activists, lawyers, journalists, businessmen, government personnel and other sections of the society to get an all-round view of the situation.

The team, however, admitted that despite making efforts, it could not meet separatist Hurriyat leader Syed Ali Shah Geelani, who is under house arrest, and chief minister Mehbooba Mufti.

Following the interactions, the PUCL reached the conclusion that “the current approach of the state is premised on the fact that they can militarily subjugate the Kashmiris by causing suffering and crushing them economically and politically.”

The ground situation, it said, “reveals that far from silencing the ordinary Kashmiri people, such brutal military methods have only resulted in alienating the local population by increasing their sense of anger and injustice on one hand and on the other hand making them, especially the youth, more resolute and determined to continue the struggle for political resolution, irrespective of the price they may pay.”

The rights group observed that it was “following the alleged extra-judicial killing of Burhan Wani (Hizb-ul-Mujahideen militant commander)” on July 8 that protests, which were mainly categorised by stone pelting demonstrations, broke out throughout the Valley.

“The government responded by heavy and forceful military clampdown which resulted in a continuing spate of killings, injuries and arrests of people which continues unabated almost every day till the present.”

The PUCL said it had learnt from the Jammu and Kashmir Coalition of Civil Society, the media, lawyers and the doctors that from July 9 until October 15, as many as 101 civilians had been killed by the police and the security forces, and of these, 12 had died due to pellets fired by them. Apart from this, one policeman had also been killed in mob violence.

Indicating the scale of violence, the PUCL said that while around 15,000 people had been injured, about 1,000 of them had sustained pellet injuries in their eyes and about 300 of these had resulted in cases of blinding – which included a large proportion of school going children. According to the PUCL report, about 1,000 people had sustained pellet injuries in their eyes. Credit: PTI

The report also stated that 4,500 had suffered injuries in other body parts due to pellets and shelling, and 4,664 had been injured by bullets.

Additionally, it said that over 2,300 FIRs had been registered and over 8,000 people had been arrested so far.

Despite the scale of violence and alleged human rights violations, the PUCL said that only seven complaints had been registered against security personnel.

Referring to human rights excesses, the PUCL said 382 individual petitioners had challenged their detention under Public Safety Act, 1978 in the Jammu and Kashmir high court.

“It is estimated that about 434 people were detained under PSA, including human rights activist Khurram Pervez and lawyer Zahid Ali,” it said, adding that 12 stated government employees had also been sacked for allegedly supporting the protests.

On the excessive use of force by the security personnel, it said, “vandalism and violence during raids by the police, security forces and the army were reported by many. Beating of residents, firing at transformers and making them dysfunctional, cutting off water supply, as for example in district Bandipora, setting ablaze fields and burning of a school by the security forces, were also reported by the people.”

The struggle also led to a clampdown on the media and impacted its freedom. “Raids were conducted in the offices of newspaper Greater Kashmir which resulted in all Kashmiri newspapers stopping publication for five days,” it said, adding that, “the Kashmir Reader has been banned since October 2.”

This apart, the report also mentions how all Pakistani news channels had been taken off the air since July 9 and how initially the government had also blocked five Indian news channels for their reportage on Kashmir. The ban was later withdrawn. It also spoke about how the Internet services remained disrupted in Kashmir.

The report of the fact-finding team referred to individual attacks on the media as well, including about how “two journalists were reportedly targeted with pellets firing guns while doing their professional duty”.

The PUCL report has also provided a detailed account of the uprising and of the suffering of the people. However, it has stayed clear of mentioning either the injuries to security personnel or the pain that they have undergone.

The report said it was the killing of Wani, “who was a popular militant leader amongst the youth”, which acted as a vent and triggered this phase of protest. “Demand for azaadi, clearly expressing alienation from India with people very vocal about their lack of faith in the Indian state, was an all-pervasive voice,” it said, adding that this was reiterated by the people the team met in the Valley.

On what people think about the whole issue, it said, “the common people have lost faith in the ordinary democratic modes of redressal as they believe that they are heavily biased against them. For instance, no FIRs are registered against offences committed by the armed forces or the police, and even if [they are] registered, there is never a fair investigation, much less prosecution.”

The PUCL said the strike or hartal called by the Hurriyat as per its “weekly calendar,” witnessed mass participation and resulted in a “complete shutdown of all private establishments including public and private transport.”

The team said “it was also stated by most that even if the hartal fizzles out in a few days or weeks this time, the agitation which has started will not end but will continue with bigger and more violent eruptions in the future.”

The PUCL has also observed that a difference between the protests and collective action in 2016 and previous protests was the overwhelming support of ordinary citizens cutting across class, education, professional and urban/rural lines.

Even while the bulk of ordinary Kashmiris supported the protest action, there, however, remained a small section of people who were getting inconvenienced by the continuation of the hartal.

The report said that the people were angry over the deaths and injuries due to the firing of bullets and pellet guns. “Most of the firing, according to people, was unprovoked and targeted.”

As for the use of pellets as a means of curbing protests, it said people in Kashmir looked upon these as “an instrument of blinding and maiming the young. It was argued as to why in situations of equally violent protests in Haryana and Karnataka, pellets were not used as they were against the Kashmiris. This was cited as an instance of discrimination against the Kashmiris.”

The PUCL said it was for the first time that all women public protests were witnessed in the state and that women even participated in the funeral processions of those killed. “Young women were very vocal and said that too much bloodshed had happened and that there could be no compromise this time,” it said. Protesters throw stones at policemen during a protest in Srinagar. Credit: PTI

The group said that in Kashmir “videos were displayed showing shelling on funeral processions. Doctors talked of shelling inside the casualty area of SMHS hospital, of attacks on ambulances and private vehicles carrying the injured and causing delays which led to patients succumbing to death.”

Hunger due to loss of livelihood

The PUCL report also highlighted how protests had resulted in a loss of livelihood for many and even led to a situation of hunger among the poor. It mentioned how Baitul Maal, the local mosque committees, were helping out, but people gathered there for relief complained of the distress caused by the long hartal that had jeopardised the food security of the poor.

Similarly, it said, the banning of Kashmir Reader shows the undemocratic functioning of the state that is uncomfortable with free speech, a basic human right and foundation of democracy.

The PUCL team also claimed that the humanitarian crisis was aggravated because the hospitals did not get any support from the government of India by way of sending medical specialists, especially ophthalmologists.

In view of all these findings, the PUCL team has recommended the immediate release of human rights activist Pervez, all Hurriyat leaders and all political leaders, activists and young protestors detained under the Public Safety Act, 1978 and other criminal charges.

Thereafter, it has suggested lifting curfew and restrictions, and repealing PSA, 1978 and Armed Forces Special Powers Act from the statute books.

The PUCL has also sought a probe into the excesses and demanded “filing of cases against members of the security forces who indiscriminately killed and injured and committed other atrocities on the people.”

It also called for setting up “a judicial commission headed by a sitting judge of the SC to look into the alleged extra-judicial killing of Burhan Wani and other similar cases.”

Likewise, it has sought the lifting of the ban on Kashmir Reader, asked to end the persecution of media and ban the use of pellet guns on protests and demonstrations.

Stating that it will campaign for the release of Pervez, the PUCL said it would “continue to dialogue with the people of Kashmir through visits and other means” and “raise awareness regarding Kashmir in other parts of the country.”