Besides multiple railway stations across Punjab and Haryana, the "rail roko" protest was also staged at different places in Uttar Pradesh, Maharashtra and Karnataka, among others. 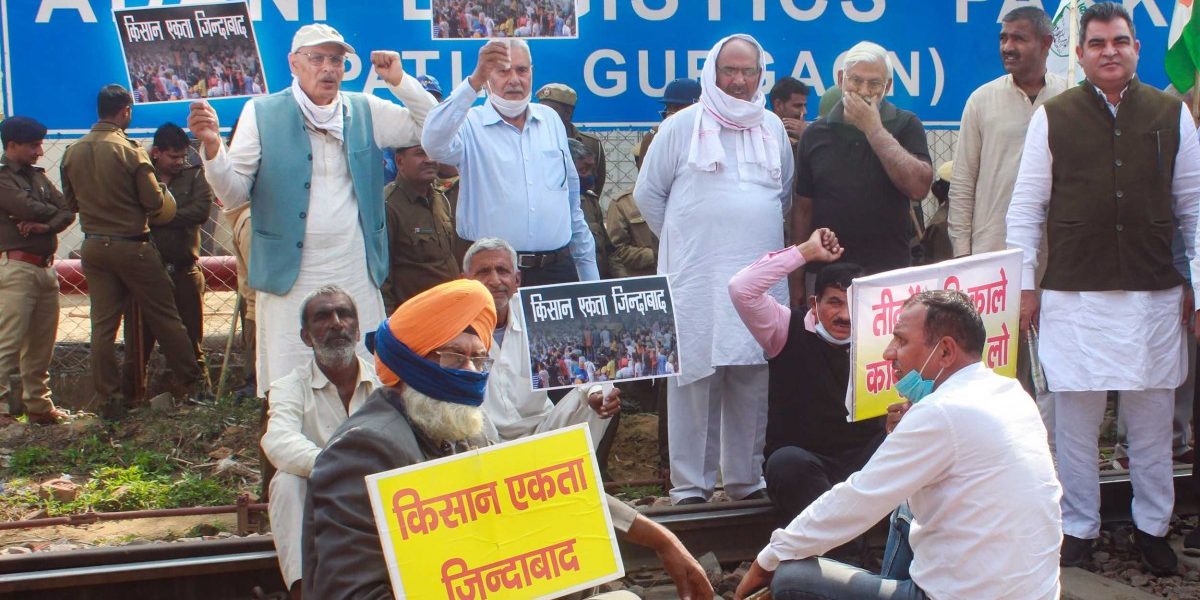 New Delhi: With farmers on Thursday blocking railway tracks across the country, at stations big and small, protesters at Singhu said this proves that the agitation is not just limited to Punjab and Haryana.

“The government has constantly been saying that the protest against the three farm laws is being staged by the farmers of just two states, Punjab and Haryana, but the rail roko andolan shows that the government is wrong.

“Farmers from so many states have participated. That is why it was important for us to protest on the railway tracks. Like the railways that has a nationwide network, our protest is also happening across the country,” Krantikari Kisan Union’s Gurdaspur district president Bhajan Singh said.

Besides multiple railway stations across Punjab and Haryana, the “rail roko” protest was also staged at different places in Uttar Pradesh, Maharashtra and Karnataka, among others.

According to another farmer leader, Amrik Singh, it was one of the many ways the protesters wanted to show their strength to the government.

“The three laws need to be repealed and the Samyukt Kisan Morcha is trying to put pressure on the government from every angle. But we have been protesting peacefully and will continue to do so,” the Jalandhar state unit president of the BKU (Kadia), said.

He added that the “rail roko” event was limited to four hours because the farmers “only wanted to send a message to the government and not inconvenience the public”.

“We do not want to create problems for the passengers. We only want the government to accept our demands, so that they can also sleep peacefully and we can return home to our families,” he said.

Thousands of farmers have been protesting since late November at Delhi’s borders with Haryana and Uttar Pradesh, demanding a rollback of the Farmers’ Produce Trade and Commerce (Promotion and Facilitation) Act, 2020, the Farmers’ (Empowerment and Protection) Agreement on Price Assurance and Farm Services Act, 2020 and the Essential Commodities (Amendment) Act, 2020.

The protesting farmers have expressed their apprehension that these laws would pave the way for the dismantling of the minimum support price (MSP) system, leaving them at the “mercy” of big corporations.

Many farmers at the Singhu border protest site said their family members were sitting on railway tracks back in their villages.

“Through today’s event, the entire country is awakening. It shows that our demand is the country’s demand. We are positive that we will resolve this, whether it takes two months or four,” Jairam Singh from Punjab’s Hoshiarpur said.

He said while he had come all the way to Singhu to join the agitation, his family members, including his wife and brother, were sitting on railway tracks back in Desuya.

Aman Sahota and Vivek Syal, also from Hoshiarpur, shared similar stories of family members participating in the “rail roko” event back home in Tanda and Jalandhar. “We will be peaceful, but we will protest. Nothing can stop us,” Sahota said.

Asked about the challenges of continuing with the protest in the impending summer heat, he said arrangements for generators and air-coolers are being made. “Heat is a very small factor, especially when there is a threat to our basic survival. These laws impact our ability to feed ourselves.

“We are prepared to face the Delhi heat too. Arrangements for 10,000 air-coolers and generators to run those are being made. We are not moving from here unless the three laws are taken back,” Sahota said. 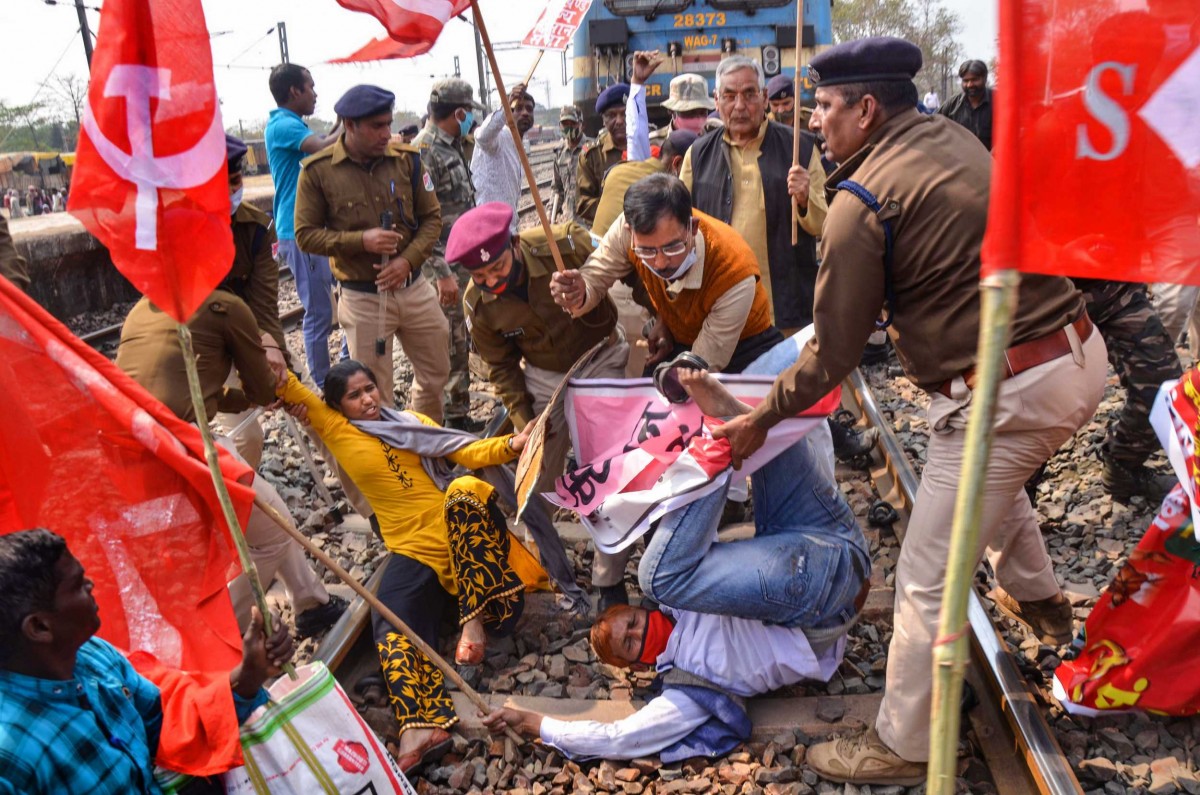 Security personnel detain activists as they block a railway track, during a four-hour rail roko demonstration across the country, called by Samyukta Kisan Morcha (SKM) as part of their agitation against Centres farm reform laws, in Ranchi, Thursday, Feb. 18, 2021. Photo: PTI

The Samyukta Kisan Morcha (SKM), an umbrella body of farmer unions which is spearheading the protest, announced the rail blockade last week, saying it would be held between 12 pm and 4 pm. The announcement of the rail roko movement came amid the ongoing protests against the laws at Delhi’s borders by farmers, mostly from Punjab, Haryana and Uttar Pradesh, and ‘mahapanchayats’ that are being organised in these states to garner support for the movement.

On Tuesday, Bharatiya Kisan Union leader Gurnam Singh Chaduni had said that farmer unions will hold meetings in poll-bound West Bengal as well and indicated that they will ask people there not to vote for those who are “snatching our livelihood”.

Railway unions which had earlier supported the farmers’ movement have distanced themselves from the ‘rail roko’ protest.

Sources indicate that the unions are not in favour of such “short protest” calls.

This will be the third major demonstration by the farmers, after the January 26 tractor march and the nationwide ‘chakka jam’ on February 6.

According to Hindustan Times, several trains have been diverted or cancelled in Punjab. Before shifting their protest to Delhi, farmers in the state had blocked railway tracks in September, days after the laws were passed by parliament.

News agency PTI reported that the Railways has deployed 20 additional companies of the Railway Protection Special Force (RPSF) across the country, with focus on Punjab, Haryana, Uttar Pradesh and West Bengal.

The farmers and the Centre have held 11 rounds of talks, the last of which was on January 22. After the violence reported during the tractor rally, no talks have been held.