Priyanka Gandhi Stopped on Way to Sonbhadra, Congress Says She Was Arrested

Congress leaders alleged Priyanka had been "illegally" arrested and the Uttar Pradesh government was attempting to crush democracy. 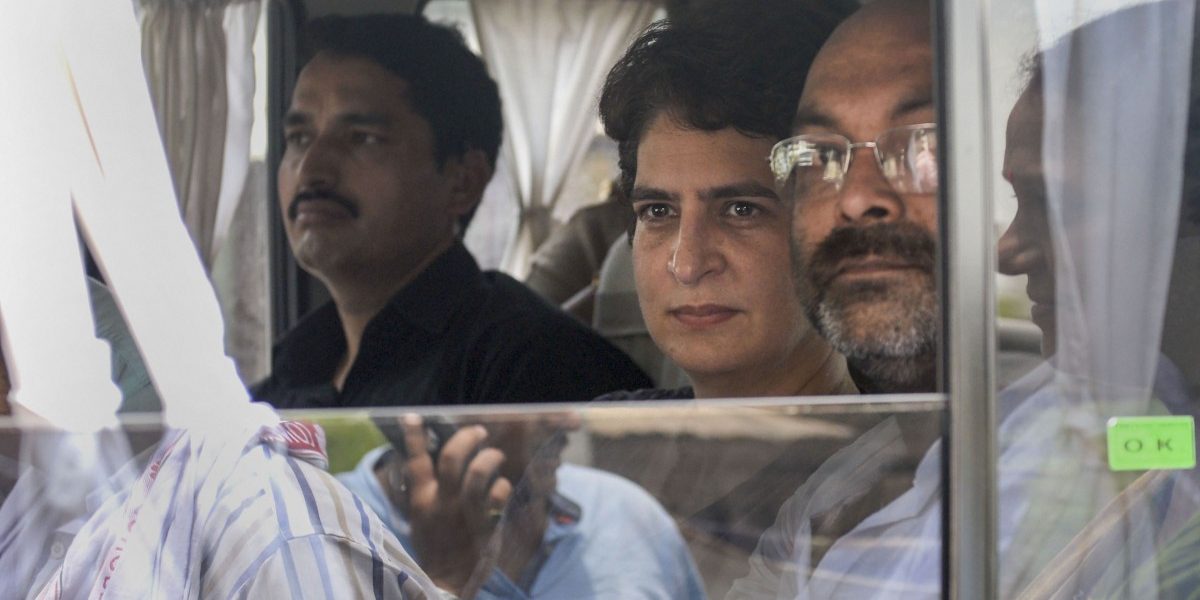 Lucknow/New Delhi: Congress leader Priyanka Gandhi Vadra was stopped on Friday from going to Sonbhadra where ten people were gunned down this week, and taken to a guesthouse after she squatted on the road with her supporters insisting that she be allowed to proceed.

The Sonbhadra shootout acquired a sharp political edge with Congress leaders, including former party president Rahul Gandhi, alleging she had been “illegally” arrested and the Uttar Pradesh government was attempting to crush democracy.

As the issue snowballed, chief minister Yogi Adityanath promised justice and said the sub-divisional magistrate and four other officials were suspended.

Besides, 29 people, including the village headman Yagya Dutt and his brother, were arrested. A committee under the additional chief secretary (Revenue) has also been constituted and will give its report within ten days, Adityanath said in a statement in the assembly.

Ten people were killed and 18 injured in an attack allegedly by supporters of the village head against Gond tribals over a piece of land in Sonbhadra’s Ghorawal area on Wednesday. Dutt’s supporters allegedly opened fire on the tribals.

Priyanka Gandhi, who landed in Varanasi and met the injured at the BHU Trauma Centre, was stopped in Narainpur while she was on her way to Sonbhadra.

She was taken to the Chunar guesthouse nearby after she sat on ‘dharna’.

Priyanka Gandhi and other members of the Congress were stopped at Narainpur while they were on their way to Sonbhadra and sat there on ‘dharna’, Deputy Inspector General Piyush Kumar Srivastava said.

They were pacified after some time and were taken to the Chunar guesthouse, the police station in-charge of Narainpur added.

An agitated Priyanka Gandhi, the party’s general secretary UP (East), said she only wanted to meet the affected families.

“A boy of my son’s age was shot at and is lying in hospital. Tell me on what legal basis have I been stopped here,” she said.

Congress leader Ajai Rai from the area said she was stopped on the Varanasi-Mirzapur border while on her way to Sonbhadra and was taken into police custody along with other Congress leaders and workers.

Back in Delhi, former party chief Rahul Gandhi termed the action against his sister “illegal arrest”.

“This arbitrary application of power reveals the BJP government’s increasing insecurity in UP,” he said.

Congress general secretary in-charge Uttar Pradesh West Jyotiraditya Scindia also hit out at the UP government for stopping Priyanka Gandhi from proceeding to Sonbhadra, saying the action was “open disrespect” of democracy.

“Meeting families of victims and expressing condolences is the responsibility of public representatives. The government has attempted to crush democracy which is highly condemnable,” he said in a tweet in Hindi.

“By arresting Priyanka Gandhi, keeping her in Chunar, will the UP government be able to cover up the killing of ten people of a tribal family in Sonbhadra?” Congress’s chief spokesperson Randeep Surjewala asked in a tweet in Hindi.