'Pre-Historic' Temple for Which Muslim Families Were Evicted Built in 80s: Report

A fact-finding team has stated that the conflict between temple committee and the evicted families developed after the BJP came to power in 2016. 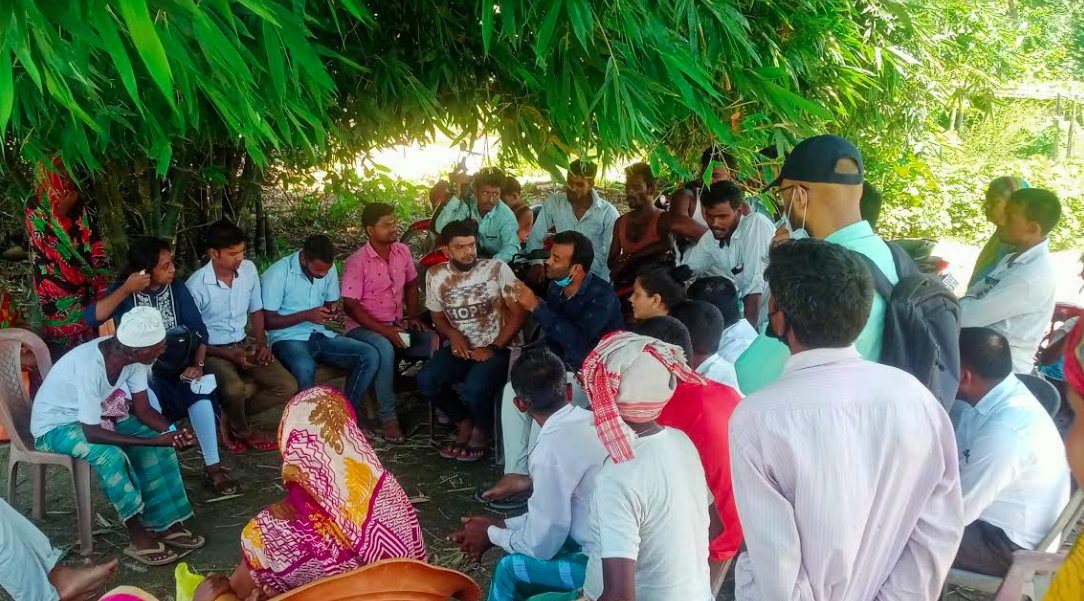 The fact-finding team speaks with families who have been evicted to make way for a temple in Assam's Darrang district. Photo: By arrangement

New Delhi: An independent fact-finding committee has found that the “pre-historic” temple over which 49 Muslim families of East Bengal origin were evicted from a sand bar in Assam’s Darrang district was not pre-historic but built by the settlers themselves in the 1980s.

The committee paid a visit to the Dhalpur village situated on a sand bar (Char-Chapori) in the Sipajhar revenue circle of Assam’s Darrang district. The state government recently removed the Muslim families from the area. It also included a Hindu family in the eviction drive.

The committee’s report after the field visit said, “The villagers had settled in that part of land back in (the) early 1980s…They must have shifted to this place during (the violence) in the (course of the) Assam Agitation in 1983.”

Remains of households of families who have been evicted to make way for a temple in Assam’s Darrang district. Photo: By arrangement

“Out of the three Hindu families, two have migrated to nearby villages in the early 2000s and the remaining family of Kanak Das took care of the temple,” the committee’s report said. Among those evicted from the area on June 7 was Kanak Das’s widow Parbati Das.

The committee said villagers told them that the temple “was built in the year 1984 and Kanak Das was appointed as the caretaker” of the temple.

“For decades, the communities over there have lived in harmony,” the villagers reportedly told the team.

According to the report, the first tussle developed only after the Bharatiya Janata Party came to power in Assam.

As per local news reports, on June 8, district authorities “cleared” 120 bighas of land of Dhalpur Shiva Mandir of “illegal encroachment” on June 7.

A day after the eviction drive was completed, on June 8, Chief Minister Himanta Biswa Sarma visited the site to personally take stock. Sarma “appreciated the efforts of the police and district administration” and assured temple authorities that the government would take “necessary steps” to “preserve and protect the historic Shiva Temple”.

Today I visited Gorukhuti in Sipajhar, Darrang with Industry Minister @cmpatowary, MLA @paramarajbongsi and former MLA @gurujyoti_das and traveled in a country boat to inspect the riverine areas that were encroached by illegal settlers near Dholpur Shiva Mandir. 1/3 pic.twitter.com/ICaA7saX3o

According to one such news report, these necessary steps would include setting up a manikut (an independent room in a temple complex, literally ‘jewel hut’), along with a guest house and boundary walls. The government also promised to turn the temple it into “a place of tourist attraction”.

“Sushanta Biswa Sarma, immediately after taking over as the Superintendent of Police in Darrang, made a visit to the Shiva Temple along with the Circle Officer Nandan Bhagawati and on seeing the large-scale encroachment on temple land, asked the encroachers to clear the land within the next three days on their own accord. Amidst the World Environment Day celebration on Saturday (June 5), a total number of 25 families of encroachers since morning started shifting their dwelling houses from the encroached land and made the temple land free from encroachment,” said Guwahati-based newspaper The Sentinel on June 6.

SP Sushanta Biswa Sarma is the younger brother of the chief minister. He was posted at Darrang just after Himanta, as the new chief minister, took over the state home ministry.

Claiming that the temple was pre-historic, The Sentinel report had said, “The pre-historic Shiva Temple with a number of caves at Dhalpur Hill under Siphajhar Revenue Circle in Darrang district has been regarded as one of the oldest Shiva temple of the country.”

“According to mythology, the second of the Pandavas, Bhim had spent his tenure of exile in Dhalpur hill,” the report further said.

Dharmakanta Nath, the secretary of the temple association who the fact-finding team met also claimed that “the temple is present in the region from the times of Narakasur”, the founder of the Bhauma dynasty in ancient Kamrup, the first kingdom believed to have ushered in Hindu faith in the state.

Nath told the fact-finding team, “Miyas (as Muslims of East Bengal origin are often referred to locally, often derogatorily) have been eyeing our temple for a long time now and hence they need to be evicted. They have encroached our lands and now they have the audacity to say that they will approach the high court (against the eviction). The government is with us and I will request you all not to interfere in this dispute. The temple will no way leave its land to the Miyas.”

However, Nath did not show any land documents to the team.

Remains of households of families who have been evicted to make way for a temple in Assam’s Darrang district. Photo: By arrangement

The aggrieved villagers have decided to approach the Gauhati high court for relief.

According to the fact-finding report, since 2016, “the villagers have been evicted three times, first in November 2016, second in January 2021 and for the third time in June 2021.” An evicted villager holds up a slip to show that he was included in the updated NRC. Photo: By arrangement

The report also said when the evicted families came to meet the fact-finding team, they brought with them documents to show the proof of their names in the updated National Register of Citizens.

“The conflict between both the groups has intensified over time and as a part of settlement a boundary of the temple land (120 bighas) was marked by the circle officer in the presence of the villagers (as informed to us, no documentation was done of the process) in the year 2016. After being evicted for the second time in January 2021, the villagers were consoled by the (then) SP with assurance of rehabilitation. But then again, they were evicted for the third time recently.”

The report stated, “After Himanta Biswa Sarma was sworn in as the chief minister of Assam, the temple authorities intensified their demand of allocation of 180 bighas of agricultural land to the temple and the eviction of the (alleged) intruders.”

The fact-finding committee’s report also highlighted that after the eviction drive, on the second week of June, the state government, in a cabinet meeting, decided to form a committee to “utilise 77 thousand bighas of government land freed from encroachers at Gorukhuti, Sipajhar in Darrang for agricultural purposes”.

The committee, formed under the chairmanship of BJP MLA Padma Hazarika, would have party MP and BJP’s national general secretary Dilip Saikia, and party MLAs Mrinal Saikia and Paramananda Rajbonshi as members while secretary and director of agriculture, Vinod Seshan, would act as the member secretary.

“It is now crystal clear that to unleash its pro-corporate agendas in terms of the (three controversial) Farm Bills, the BJP government in the state have been playing a shrewd communal agenda to divide the people. Attaching the sentiments of a temple will enable the state government to generate support of the majority in the state which will smoothen its facilitation of corporate loot in terms of evicting the Muslim dwellers of the Char-Chapori region and then handing over them to the corporates,” the report categorically stated.

The report quoted one of those evicted, 45-year-old Reshma Khatun*, who said that when a JCB machine began demolishing her house, she could only manage to run away with her goats. In the process, Khatun was injured and had to sell one of the goats to foot the medical bills involved with getting stitches on her leg.

Reshma Khatun*, evicted in Assam’s Darrang, shows the injury on her foot. Photo: By arrangement

The Dhalpur eviction drive is among several similar drives taken up by the Sarma government.

This June, writing to the Gauhati high court chief justice to take suo motu cognisance of the matter and halt such drives during the COVID-19 pandemic, as it would be “a violation of the Articles 21 and 39 of the Constitution”, Congess MLA from Barpeta, Abdul Khaleque had said, “Considering the COVID-19 pandemic, a full bench of the honourable Gauhati High Court headed by Chief Justice, vide its order dated 10.05.2021, has ordered that any decree for eviction/ dispossession or demolition should remain in abeyance.”