The journalist has been charged with IPC sections which carry a jail term of up to seven years. This is the second time the UP police has arrested Kanojia. In 2019, the Supreme Court ordered his immediate release. 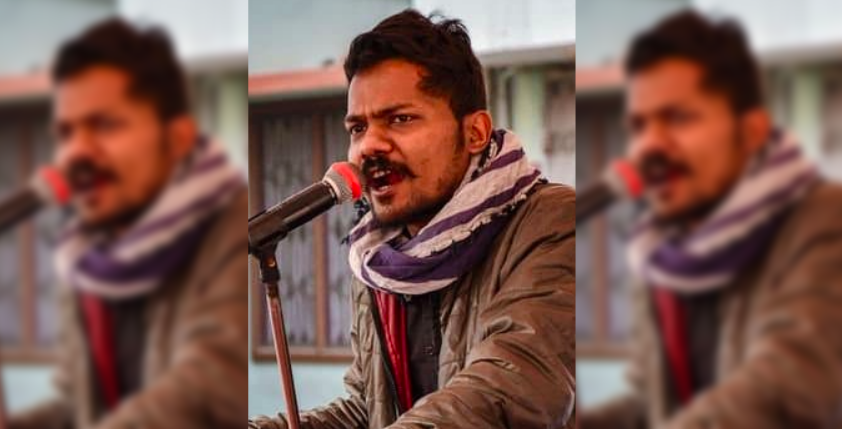 Initially, the police had not made it clear to Kanojia and his family over which tweet the complaint against him had been registered.

But the FIR released by the police points to a deleted tweet URL and says, in its description of the alleged offence, that Kanojia’s tweet had shown Hindu Army leader Sushil Tiwari as saying the Ram temple in Ayodhya should not allow Dalits, STs and OBCs entry.

Jagisha Arora, Kanojia’s wife said, “The UP police came to our house half an hour [before the arrest]. Almost all of them were wearing civil clothes, only one cop was in police uniform. They arrested Prashant and said, ‘Tweet ka maamla hai.’ When I asked them which tweet are they talking about, they said, ‘Bohot tweet kiye hain tumney, upar sey orders aaye hain humein, follow toh karna padega’.”

Translated, this means, “You have tweeted a lot, there are orders from above, we have to follow them.”

While the UP police would not comment on Prashant Kanojia’s whereabouts, indications are that he is being taken to Lucknow. It is not clear if the arresting policemen have obtained transit remand from a Delhi magistrate, as required by law, before taking him out of the state.

Jagisha said it was her birthday yesterday and the police’s action was like an ironical present for her. 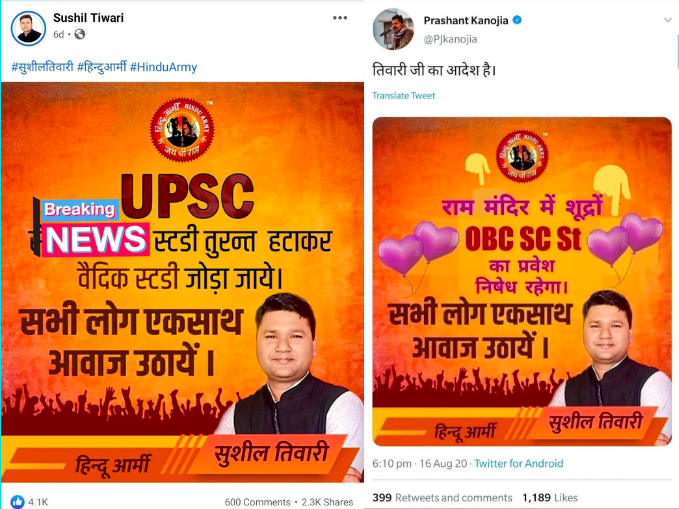 The Hindu Army is an outfit which reportedly came into existence in 2019. In January this year, the Hindu Army had put up posters which read, “Jaago Hindu jaago” (‘Rise, Hindu, rise’) in sensitive areas like the Tilewali Mosque in Lucknow. There are several videos of Tiwari still available on social media in which he openly incites Hindus to boycott Muslim vegetable sellers, hair cutting salons etc.

Kanojia’s wife told The Wire that Kanojia had deleted the tweet shortly after posting it as he had felt it was not the right thing to publish.

The FIR against Kanojia, which was filed yesterday, August 17, by a policeman from Hazratganj police station, one Dinesh Kumar Shukla, reads:

Further, it said, “I request you to register an FIR against this and take action.” 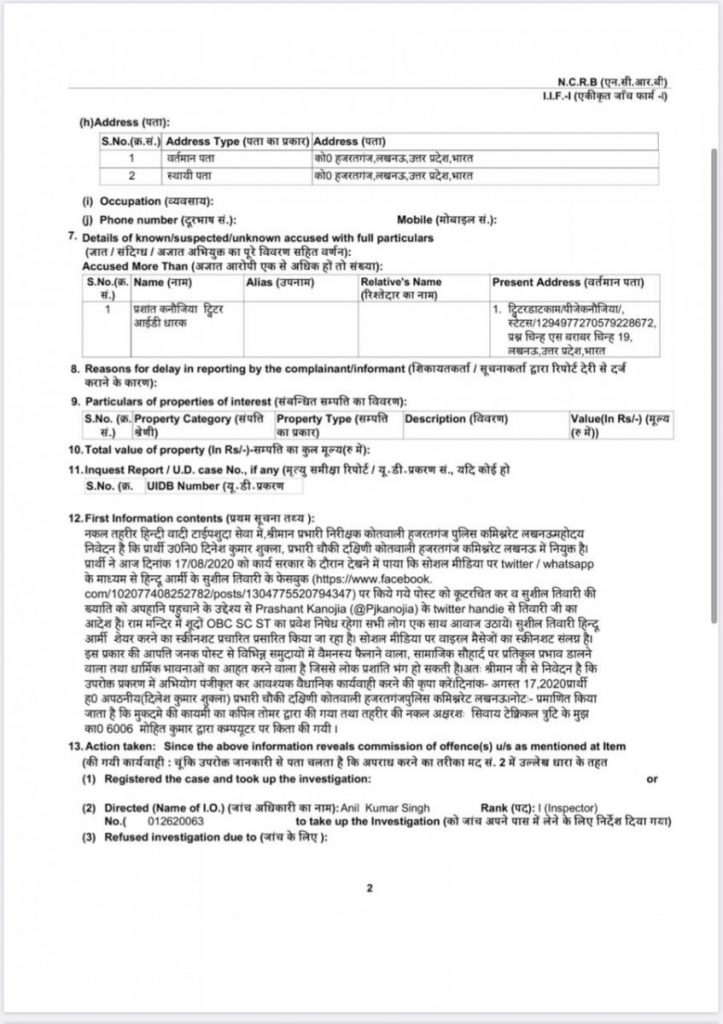 The FIR invokes nine sections of the Indian Penal Code. Sections are 153A (promoting enmity between different groups on grounds of religion, race, place of birth, residence, language, etc., and doing acts prejudicial to maintenance of harmony), 153B (imputations, assertions prejudicial to national-integration), 420 (cheating and dishonestly inducing delivery of property), 465 (punishment for forgery), 468 (forgery for purpose of cheating), 469 (forgery for purpose of harming reputation), 500 (punishment for defamation), 500 (1)(B) (with intent to cause, or which is likely to cause, fear or alarm to the public, or to any section of the public whereby any person may be induced to commit an offence against the State or against the public tranquility), and 505(2) (statements creating or promoting enmity, hatred or ill-will between classes).

Kanojia has also been booked under Section 66 of the Information Technology Act, 2000, which pertains to computer-related offences.

In 2019, Prashant Kanojia was arrested by the same Uttar Pradesh Police for posting a tweet and a Facebook post on Chief Minister Adityanath. The Supreme Court, later, had asked the government to release him. The FIR at that time had been registered at Hazratganj police station in Lucknow. In it, UP Police had alleged that the accused had made “objectionable comments against the CM and tried to malign his image”.

Kanojia had shared a video on Twitter and Facebook where a woman was seen speaking to reporters of various media organisations outside the chief minister’s office, expressing her desire to marry Adityanath and claiming that she had sent him a marriage proposal.

Note: This is a developing story and is being updated as more information arrives.