Pranab Doley, who announced his decision to contest the assembly election, feels this was a clear tactic of intimidation by the BJP government. 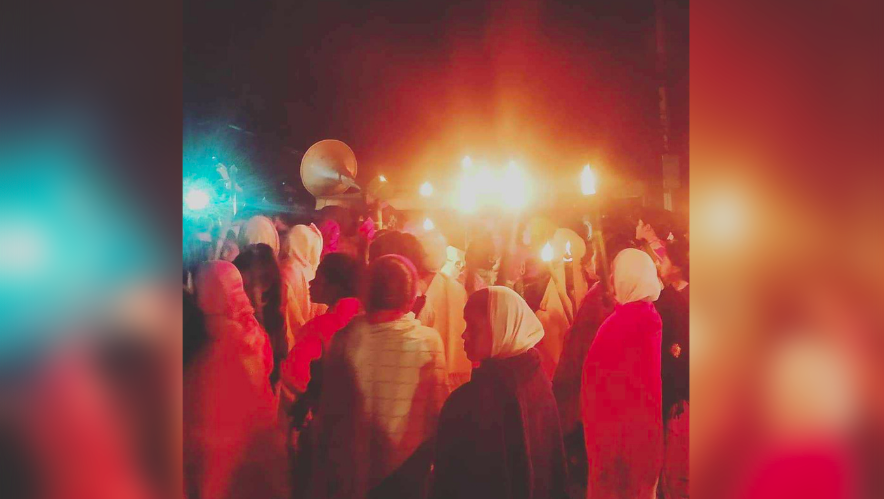 Bokakhat (Assam): Eight heavily armed men barged into the house of Assam activist Pranab Doley, close to midnight on February 3, a day after he announced his candidature to contest the upcoming assembly polls. Though Doley has alleged that they were policemen, local authorities have denied it.

Working on the issues of displacement and human rights in Bokakhat area, close to the Kaziranga National Park, Doley, and a senior cultural activist from the area Soneshwar Narah, have further alleged that their harassment by the ruling dispensation continues even after entering the electoral fray.

Doley said he was having dinner with some guests at around 11:30 pm on Wednesday at his residence in Bokakhat when the alleged policemen entered his compound. “Our dogs alerted us to their presence inside the compound. They were heavily armed. We approached them about their sudden entry to our compound without any search warrant. However, when they saw us, they immediately fled from our compound,” he said.

Bokakhat Sub-Divisional Police Officer (SDPO), Prithvi Rajkhowa has, however, said that he had no information on any police search around Doley’s house. “Bokakhat Police is not involved in any operation around Doley’s house,” added Rajkhowa. Golaghat District Superintendent of Police, Pushparaj Singh, too said that there is no case against Doley for the local police to pursue.

The incident, however, falls in the long list of cases filed by the district administration against Doley and Narah. Doley is Narah’s protégé. After founding Jeepal Krishak Sramik Sangha, a peasants’ and farm workers’ organisation, the duo gained international attention after they spoke in a BBC report against Kaziranga National Park authorities militarising conservation of wildlife. The state government denied the charge and BBC was banned from doing environment-related reports in the state.

The duo has faced several detentions and arrests after a public hearing for a bio-diesel plant near Kaziranga National Park and for exposing the pilferage of rice by the Kaziranga Cooperative Society meant for marginalised families during COVID-19 lockdown.

Recently Narah faced the ire of the Assam police after he had returned from the farmers’ protest on January 26 along with 13 others. Azara Police in Guwahati, under whose jurisdiction the Guwahati Airport is, arrested All India Kisan Sabha’s Assam secretary Jayanta Gogoi and cultural activist Dinesh Das for violating COVID-19 protocols. Narah continues to elude police after being named in the criminal case along with Gogoi and Das.

Doley told The Wire that they remain the target of harassment by Bharatiya Janata Party and Asom Gana Parishad leaders even though they have stated their plans to contest elections. “We entered the electoral fray after being targeted as activists. The election would have been the litmus test for the causes we have been taking up. Now it’s clear that the leaders do not even want a healthy contest as they keep sending police to our houses,” Doley added.

On February 3, Congress-Left-AIUDF mahajot or grand alliance backed Pranab Doley – as was apparent from their preliminary list of candidates to be contesting in the Assam elections. In Bokakhat constituency, Doley is likely to contest against sitting MLA and Assam agricultural minister, Atul Bora.

On February 4, supporters of Doley took out a rally through Bokakhat town protesting the entry of the armed men at his house.