Days before resorting to the extreme step, the family had recorded a video in which they alleged that police had wrongly implicated them in two theft cases. 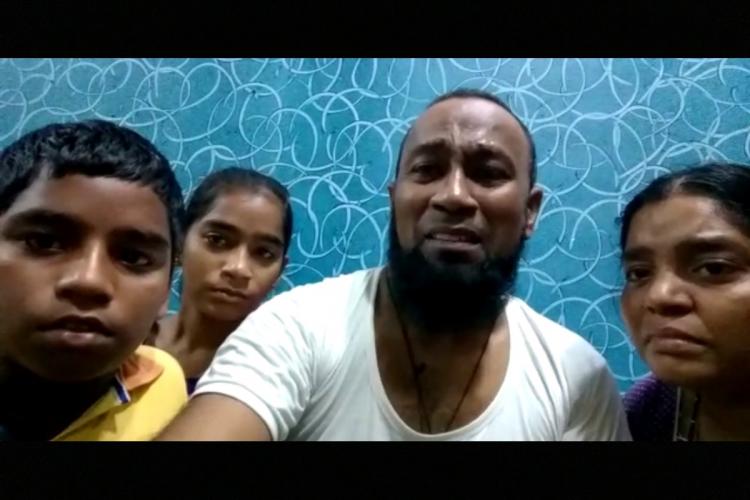 Screen grab from the video which Abdul Salam and his family members recorded before killing themselves. Credit: Twitter/ @aarifshaah

New Delhi: A family of four from Nandyal in Kurnool district of Andhra Pradesh died by suicide after alleging torture over several months at the hands of the local police. Days before resorting to the extreme step, the family had recorded a video, which surfaced recently and has resulted in the arrests of two policemen in connection with the case.

On November 4, government railway police of Kurnool district had found the dead bodies of Abdul Salam and his family members, Noorjehan (wife), Salma (daughter) and Dada Kalandar (son) near Kowlur village in Panyam mandal, close to Nandyal, according to a report of The News Minute. While Salam’s wife worked as a private school teacher, their son was in Class 4 and daughter in Class 10. The family killed themselves by coming in the way of a moving train.

Abdul Salam had been working at a local jewellery store in Nandyal, where an incident of theft was reported a few months ago. The store owner suspected Salam of the theft and he was sent to the jail, according to the reports. After a while, Salam got bail and started driving an auto to make money. However, harassment by the police and the store owner did not stop, according to the relatives.

According to NTV Telugu, a local news channel, Salam was beaten badly by the police “until he bled”. “He came out on bail. When he would go (to the police station) to sign every month, he was abused very badly each time,” a relative has been quoted as saying by the news channel.

Local reports note that Salam was also allegedly implicated in relation to a missing bag from a passenger who travelled in his auto. The police alleged Salam and his associates had stolen the bag. According to Salam’s relatives, he was verbally abused by the police and was asked to return to the police station to be taken to Vijayawada.

In the video that he recorded with his wife and children, Salam said that he had been wrongly implicated by the police in the two theft cases.

“I didn’t do anything wrong. I have nothing to do with the theft that happened in the auto, or in the shop. I am unable to bear the torture. We have no one to help us. That’s why I hope at least my death will bring peace of mind,” Salam said in the video as his wife and children sobbed.

His relatives have said that Salam was unable to bear the torture by the police, and was also pained by the inappropriate manner in which police officials spoke about his wife. They have also alleged that the police had, in fact, seized jewellery from the family to support their claim that he had stolen gold from the store, The News Minute report has said.

Following the storm the incident has kicked up, Nandyal circle inspector, Somasekhara Reddy, and head constable, Gangadhar, who believed to have tortured Salam and his family, have been arrested. They have been booked under Sections 323, 324 and 306 r/w Section 34 of the Indian Penal Code.

The Times of India has reported that Chief Minister Y.S. Jaganmohan Reddy is personally monitoring the case, and has ordered that the investigation be fast tracked. Inspector general of police Sankha Brata Bagchi and IPS officer Arif Hafeez are investigating the case.

Meanwhile, opposition leader and TDP chief N. Chandrababu Naidu said that the suicide of Salam’s family was an example of how Muslims are being harassed as the police and having false cases foisted against them.