The artist was forced to deface his own mural before being taken into custody. The police have yet to say anything about the grounds for his detention. A mural drawn by artist Mudasir Gul on the gates of a spillover channel of Jhelum river in Srinagar showing the weeping face of a woman, her head draped under a Palestinian flag, with ‘We are Palestine’ written in bold, white letters. The police later forced the artist to deface the mural. Photo: Special Arrangement

Srinagar: The security agencies in the Valley are keenly watching the buzz on social media platforms amid fears that the Israeli bombing of Palestinians in Gaza may “disturb the peace” and trigger “disorder on Kashmir’s  streets”.

A handful of peaceful protests have been reported in the past few days in parts of Kashmir. And on Saturday, the Shopian police detained a popular religious preacher, Sarjan Barkati for speaking about the unraveling situation in Palestine.

Barkati’s wife, Shabrooza, said he had delivered a sermon on the eve of Eid in Reban village of south Kashmir’s Shopian district in which he prayed for Gaza and an end to the killings of civilians, including children in the Israeli airstrikes.

“A police party took him away in the (Saturday) afternoon,” said Shabrooza, a homemaker, adding that Barkati, who spent four year in jail after he was arrested in 2016, was released only in October 2020. The couple has two children.

In 2016, Barkati became one of the faces of the massive protest movement in Kashmir sparked by the killing of the Hizbul Mujahideen’s Burhan Wani in an encounter with the security forces.

Barkati’s powerful way of sloganeering pulled crowds in the thousands, earning him the sobriquet of the ‘pied piper’ in newspaper headlines and on social media platforms.

He was booked under the Public Safety Act on October 10, 2016 and thrown into jail.

“I was already struggling to make ends meet. I have exhausted all our savings in getting him released and taking care of my children in these years. I don’t know how we are going to survive now,” Sabrooza said.

The J&K Police also detained a 32-year-old artist, Mudasir Gul, on Friday in the wake of a pro-Palestine protest that broke out in Srinagar’s Padshahi Bagh locality earlier in the day.

A mural was drawn by Mudasir on the gates of a spillover channel of Jhelum river near the locality and it showed the weeping face of a woman, her head draped under a Palestinian flag, with ‘We are Palestine’ written in bold, white letters.

Mudasir also participated in the protest along with other youngsters who reportedly set ablaze an Israeli flag. The video of the protest had gone viral on social media.

Mudasir’s brother, Badr-ul-Salam told reporters in Srinagar that a police team raided their home soon after the video circulated on social media. “They took him to the place where the mural was drawn and asked him to deface it,” Salam said. 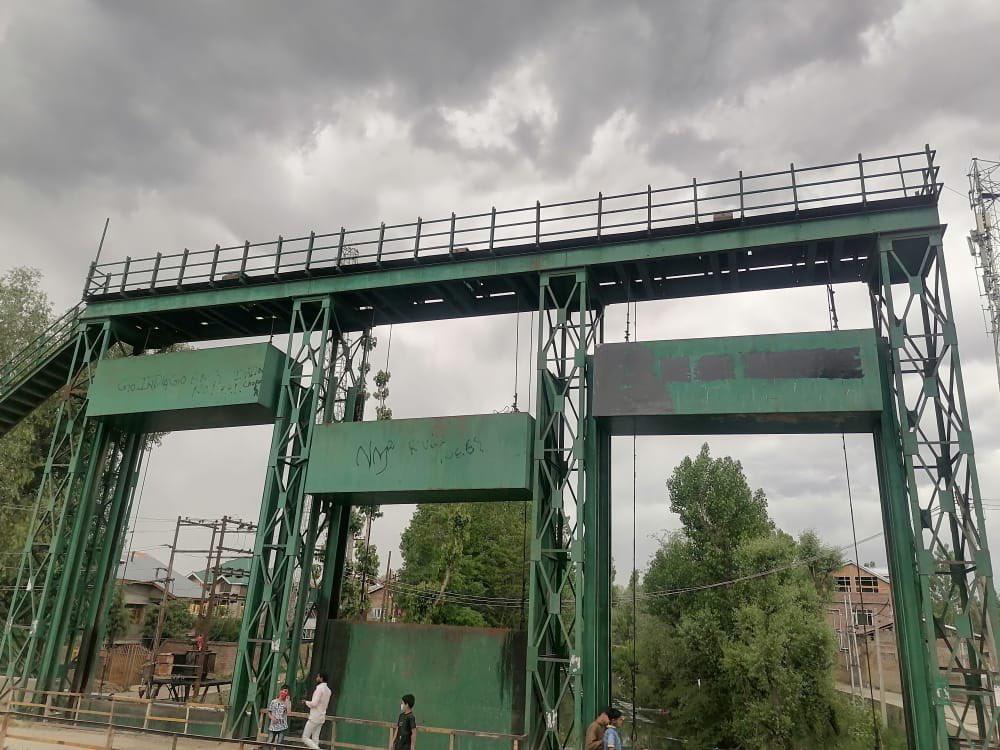 After the mural was defaced. Photo: Special Arrangement

“We don’t know where they have kept him or if they have pressed any charges,” he added. Though some reports claimed Gul has been booked under the PSA, there has been no official confirmation of this.

Kashmiris instinctively bond with Palestinians as much out of solidarity as from a sense of shared helplessness in being disempowered in their own land.

As the images of Israeli aggression on Palestinians are beamed from television screens and circulated on social media platforms, Kashmiris have looked for ways to respond creatively.

In the past, there have been hundreds of pro-Palestine demonstrations in Kashmir during which young Kashmiris have clashed with security forces. With demonstrations well nigh-impossible in the aftermath of the scrapping of J&K’s special constitutional status and statehood, the only avenues left to show solidarity are prayers, grafitti and writing.  But as the arrests of Barkati and Gul show, even these peaceful acts are not being allowed.

In a statement on Saturday, Kashmir police chief Vijay Kumar said there are “elements who are attempting to leverage the unfortunate situation in Palestine to disturb peace and order in the Kashmir valley.”

“We are a professional force and are sensitive to public anguish. But J&K police has a legal responsibility to ensure law and order as well. It, however, wouldn’t allow cynical encashment of the public anger to trigger violence, lawlessness and disorder on Kashmir streets,” Kumar said.

“Expressing opinion is a freedom but engineering and inciting violence on streets is unlawful. All irresponsible social media comments that results in actual violence and breaking of law including Covid protocol will attract legal action. We urge cooperation of all citizens,” Kumar added.

Attack on freedom of expression

Mir Suhail, a Kashmiri artist based in the US who graduated from Srinagar’s College of Fine Arts along with Mudasir, the detained artist, said the crackdown is an attempt to silence dissenting voices.

“Mudasir has been an apolitical artist since our college days. The fact that he has been rounded up by the  police for a seemingly harmless mural seems like a message to everyone else,” Suhail surmised.

“That even the artists can’t speak their mind is a telling statement of the state of democracy in India,” he said.

On Friday night, a police team raided the Padshahi Bagh locality where the anti-Israel protest had taken place during the day and detained at least six more youngsters.

Locals said the brothers of two suspects, who had reportedly participated in the demonstration, were also whisked away. They were set free only after their ‘culprit’ brothers surrendered before the police.