Photo Feature: How Kolkata Stood up to Moral Policing on the Metro

A young couple was harassed and beaten up for hugging in a metro compartment. 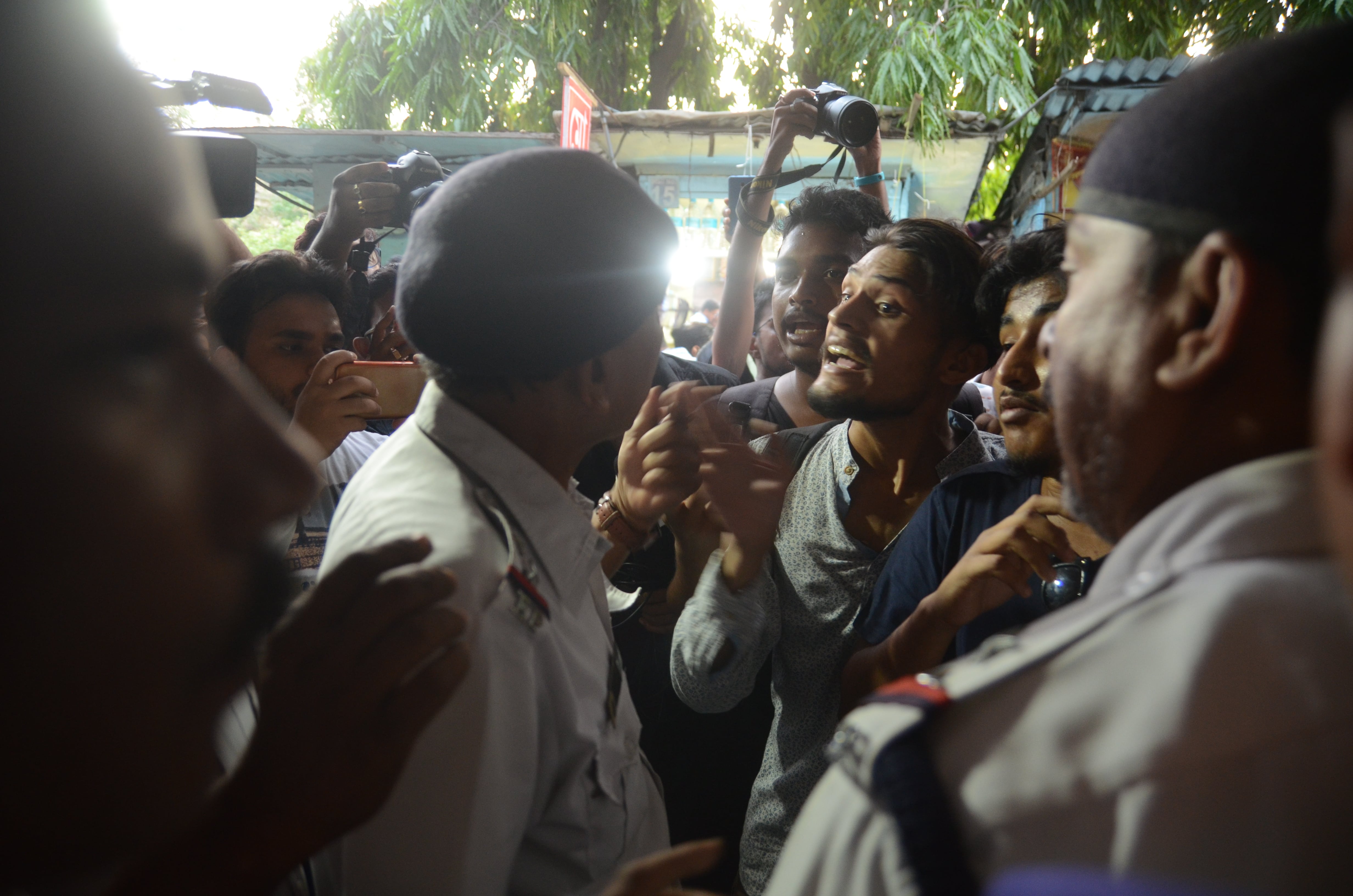 Protesters engage in a heated argument as the police task force try to evacuate the space. 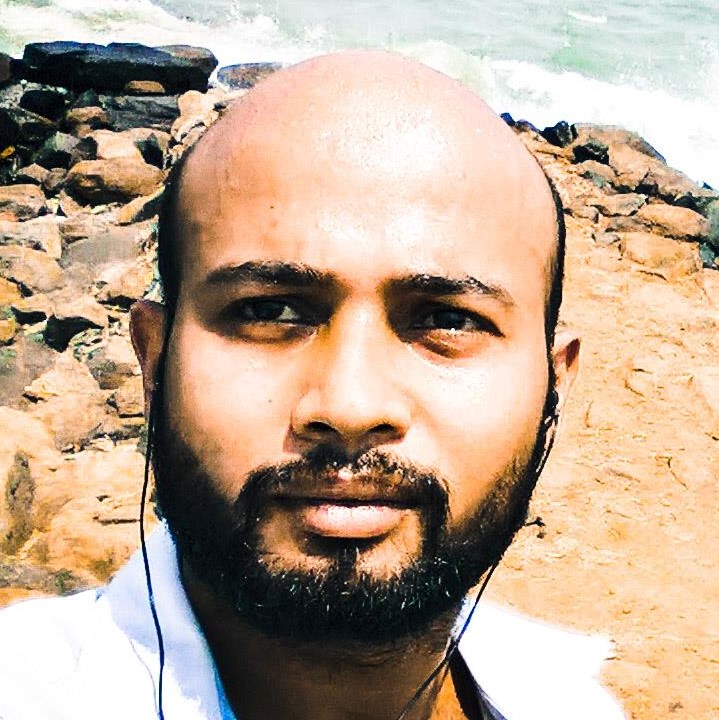 Kolkata: A young couple was harassed and beaten up on April 30 by a crowd in Kolkata for hugging each other inside a metro compartment.

In images recorded on a mobile phone late on Monday night, the woman is seen trying to shield the man with her body as a group of men surrounds them. The man was beaten up and so was the woman, when she tried to shield him, according to an NDTV report. 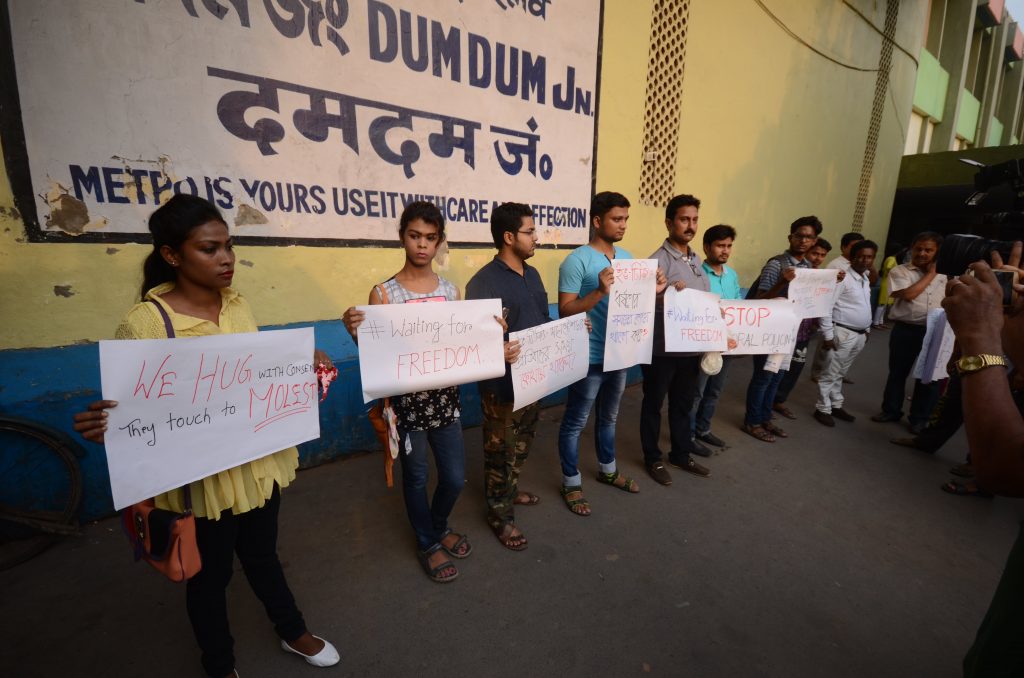 Protesters at the entrance of the metro station. 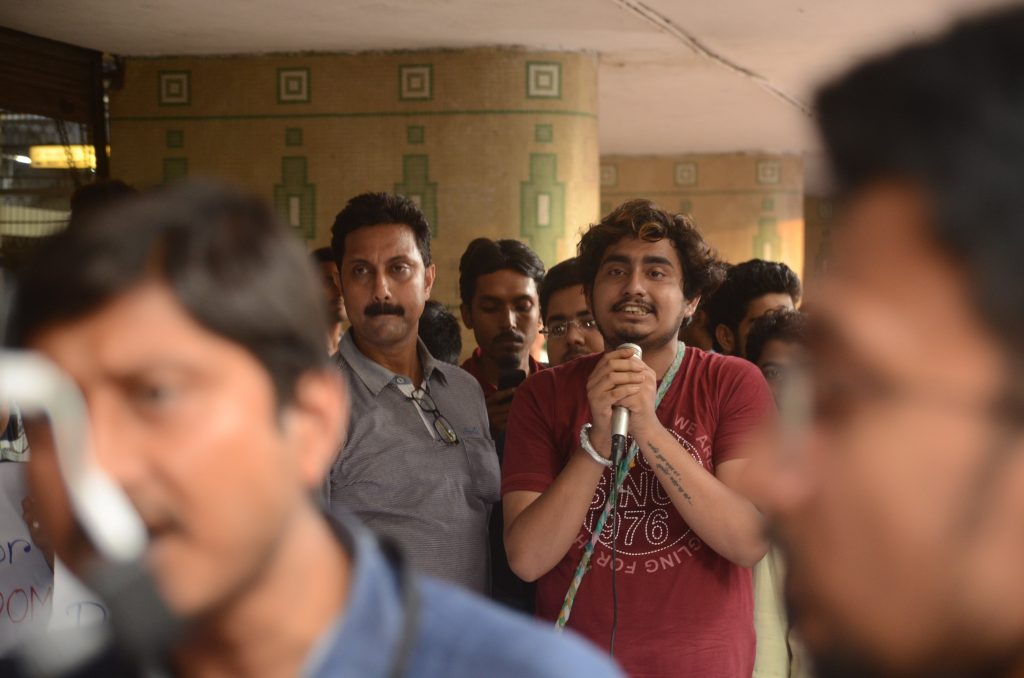 Abhishek Kar, a student who turned up to protest the incident on Tuesday.

Later, some other passengers from an adjacent compartment tried to help the couple and save them from the enraged mob, according to witnesses.

Members in the mob reportedly yelled “Get a room” and “Go to a club” at the couple. When a stop came along – the Dum Dum metro station – the couple was pushed out and beaten by a group that included middle-aged and elderly passengers. 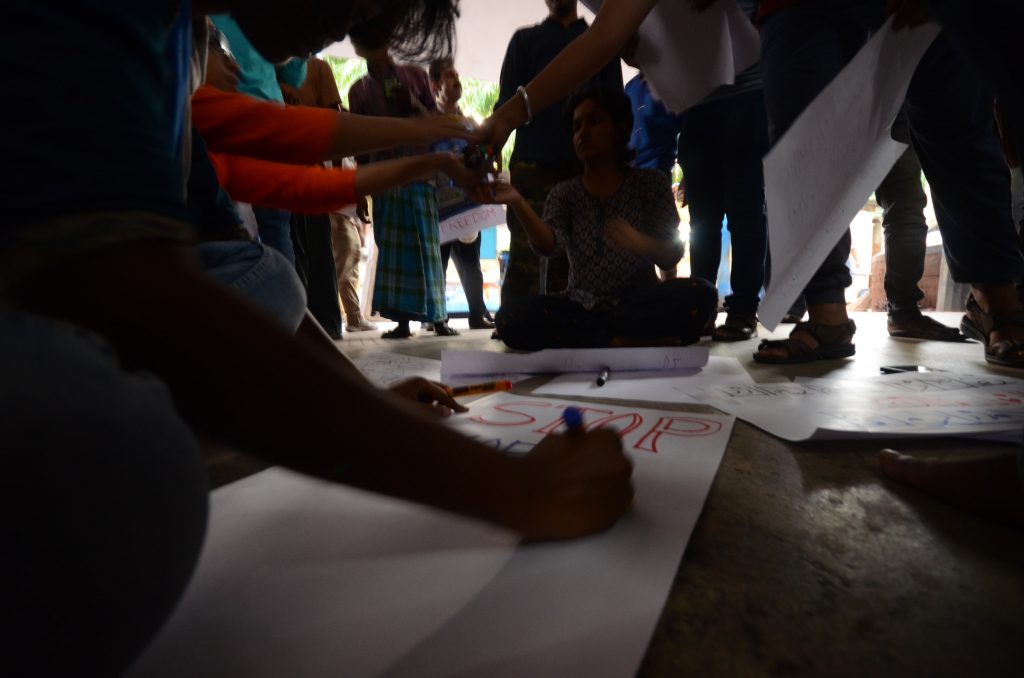 People gathered outside the station to protest were mainly college students.

So far, no police complaint has been filed in this regard.

In the month of April alone, several incidents of moral policing have taken place across the country. A woman student at IIT Madras was harrassed by a staff member of the institute for hugging a male friend on campus. The staffer allegedly took pictures of the two hugging and refused to delete them from his phone.

On April 9, a woman in Assam was assualted by a group of men while walking with a male friend. The video of the assualt had gone viral on social media. In Mysuru, Karnataka, on April 19, a nursing student who was walking along with a male friend from a different community was allegedly assaulted and issued a murder threat.

The incident in Kolkata has sparked outrage and protests. On Tuesday evening, a number of students turned up in order to protest against the moral policing incident. Starting at around 5 pm, the number of protesters within just 30 minutes, shot up to 150. A petition has been filed by the protesters and submitted to the authorities concerned. They have even claimed that if no concrete step is taken after looking into the CCTV images, they will hold a ‘kiss of love’ event at the Dumdum junction. 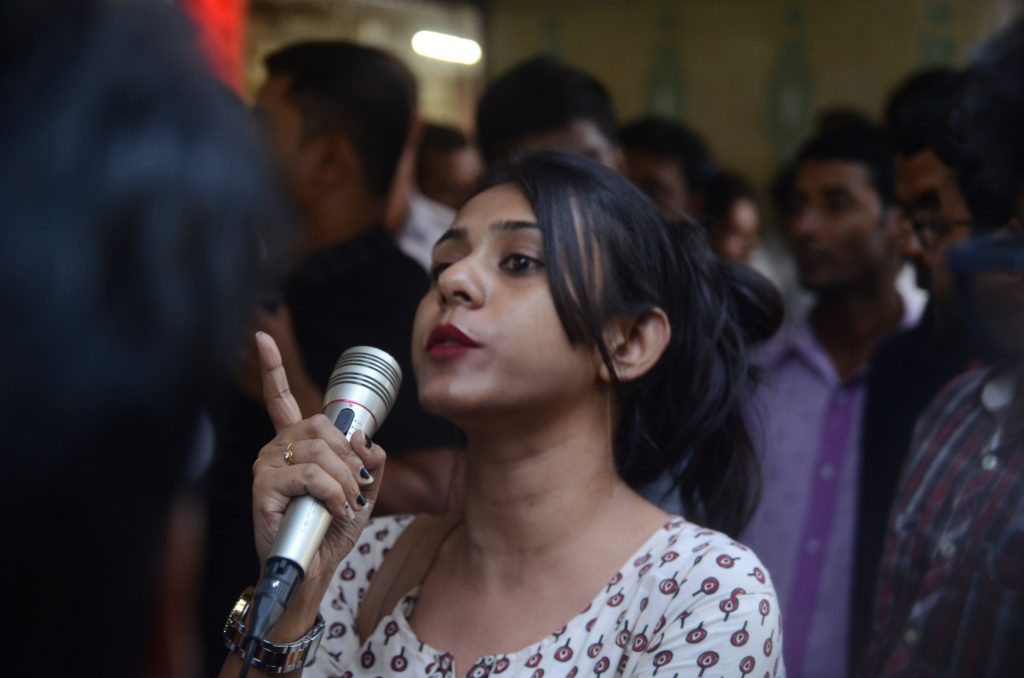 Pallavi Sen, an eyewitness to the incident, was present at the protest. 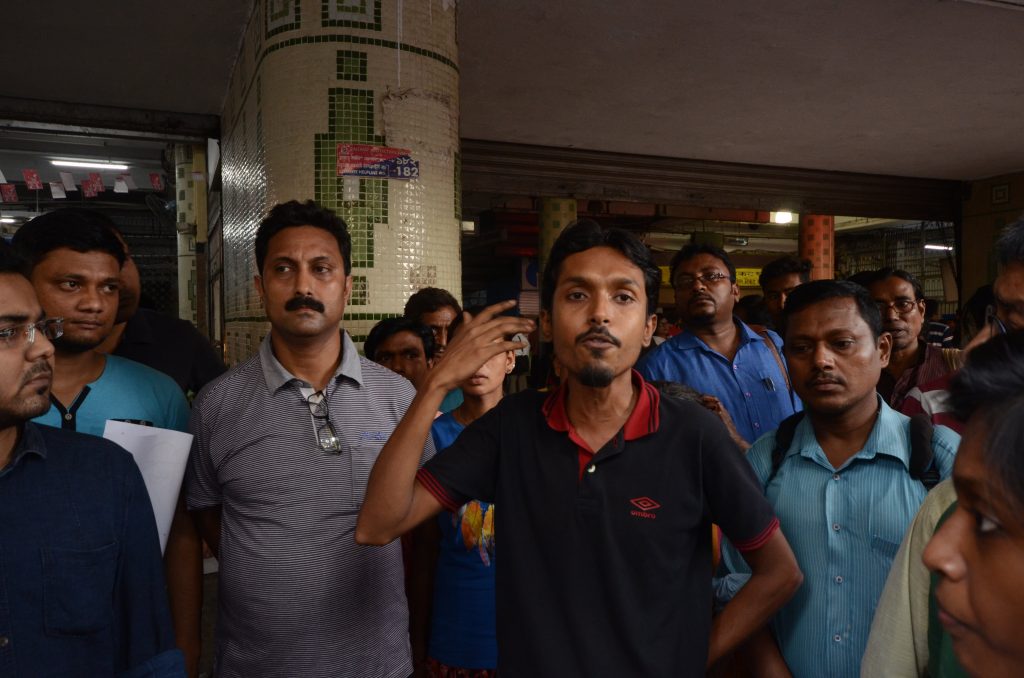 Pavel (in black T-shirt), one of the main organisers of the protest, shouts anti-harassment slogans. Police and Armed Forces bar protesters from entering the station. 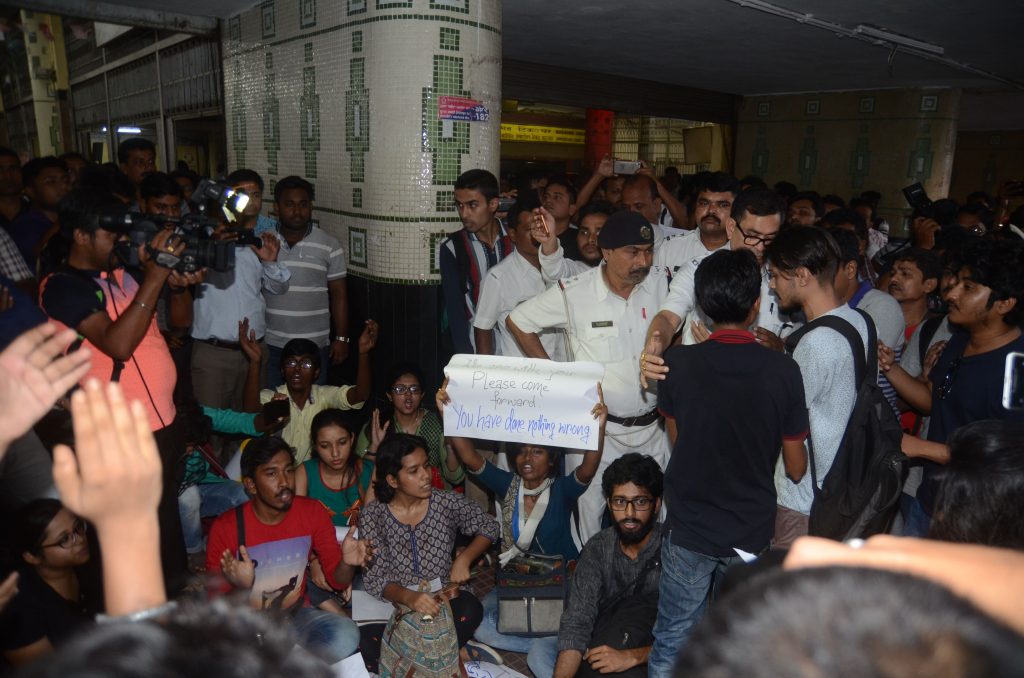 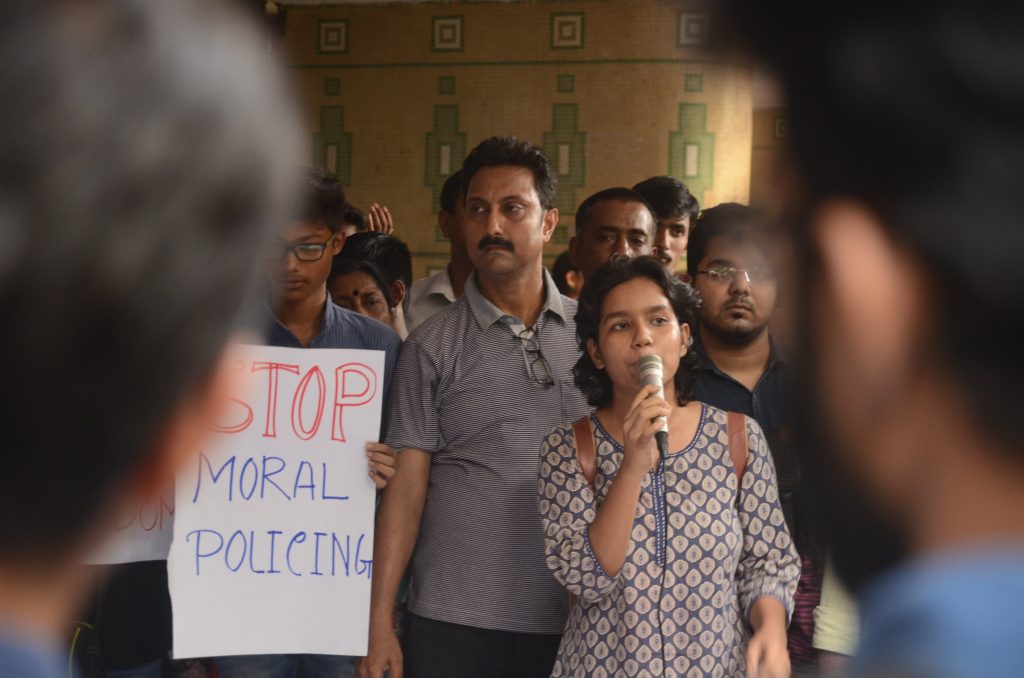 Rimjhim Sinha, a student who came to the protest.

After maintaining hours of silence, the Metro Railway authorities put out a Facebook post saying, “Dear commuters, we are trying to enquire into an incident which has allegedly taken place y’day at Dumdum Metro stn. No complaint has been lodged by anyone as yet .However we are trying to get to the bottom of it……. But we would like to make one thing very clear… that Metro Rly IS AGAINST MORAL POLICING.(sic)”

(All photos by Satwik Paul)

Satwik Paul is a freelance photojournalist based out of Kolkata. His works have appeared in the Times of India, Firstpost, Civil Society Magazine and LBB Kolkata among others.