Mining in Baphlimali has caused destruction to the climate and environment, and has wrecked the lifestyle of thousands of adivasis. 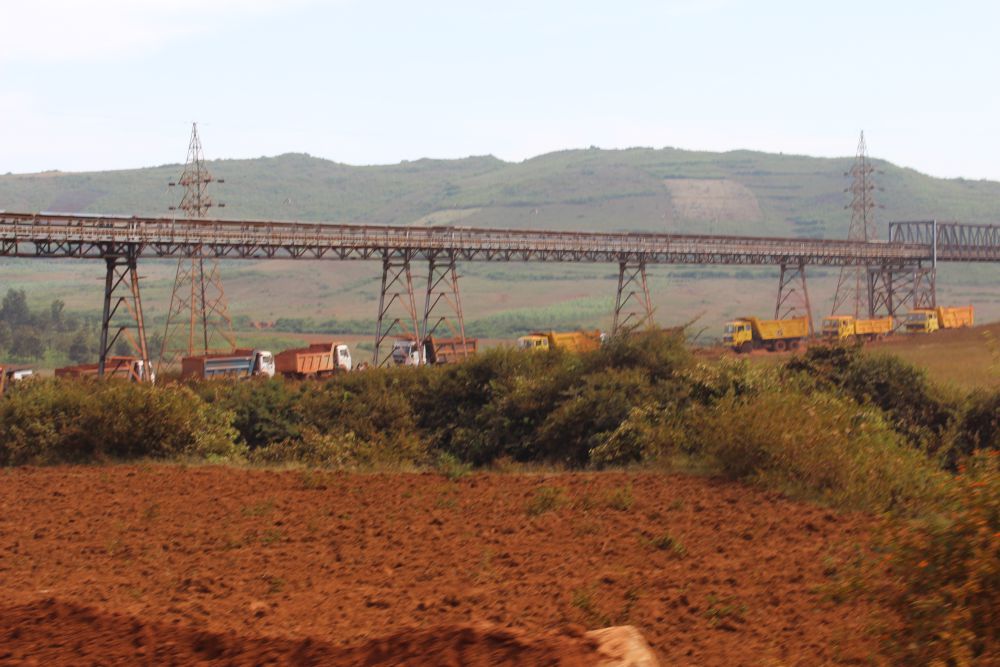 “These days we are seeing an increasing number of accidents in the area. The uncovered trucks create problem of spreading dust in air”, said Sahadev Jani, a native of the village. Srinibash Das, a developed professional working in the region, said, “The permissible capacity for each truck to carry the ore is ten tonne/truck with ore wrapped by proper cover. But it has been observed that most of the times the trucks are much overloaded and run without covering the ore.” Credit: Abhijit Mohanty

Over the last 20 years, large tracts of forest have been cleared in the mineral rich districts of Odisha to make space for mining industries. This has severely affected the food and nutritional security of the indigenous communities. For centuries, forests have been a vital source of livelihood for the communities. Non-timber forest produces like tuber, roots, wild mushroom, fruits and berries, which were an integral part of the diet of the adivasi communities and provided essential protein and vitamins, are disappearing at an alarming rate.

Activists fighting for the rights of the adivasi communities claim that the environment and social fabric of adivasi-inhabited areas are severely threatened by large-scale mining and industrial activities. Besides causing drastic climate change and a decline in wildlife, mining in Odisha has displaced and severely undermined the low-carbon-footprint lifestyle of hundreds of thousands of adivasis and other marginalised communities.

Take, for instance, the case of bauxite mining by Utkal Aluminium International Limited (UAIL) in Baphlimali. The Baphlimali hill range is situated in the south-western part of Odisha. The major part of the hill falls under Kashipur block of Rayagada and the rest is in the Kalahandi district.

For centuries, adivasi communities like the Paraja, Jhodia, Penga and Kondh have been living amidst the Baphlimali foothills. For generations they have depended on Baphlimali for jal, jamin aur jungle (water, land and forest). Rain-fed agriculture of millets, cereals, pulses, paddy and collection of non-timber forest produces were essential for the livelihood of the communities. And most importantly, Baphlimali is also one of their sacred places.

Baphlai Budhi is the reigning goddess of the adivasi communities and is supposed to remain on top of the Baphlimali plateau. Over the years, UAIL has constructed wide roads against the length and breadth of Baphlimali, and check posts have been set up at several places at the hill top. The adivasis are now forbidden from accessing the top of the Baphlimali and are helpless when it comes to protecting their own goddess. 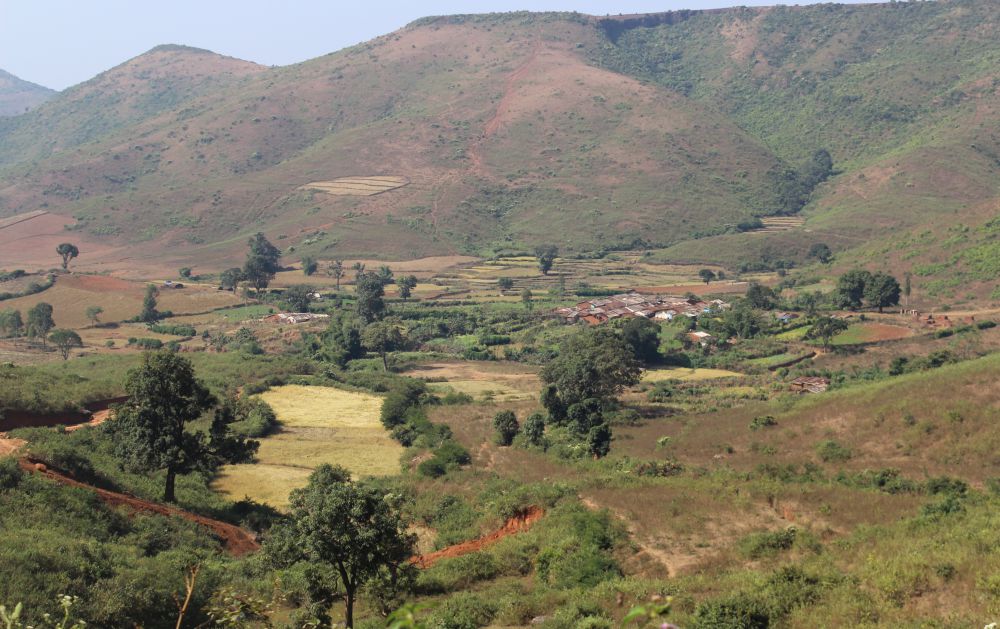 “We live in Karanjkupakhal village on the foothill of Baphlimali. We worship Baphlimali. It bring rains, it protects us from evil spirit. But the Utkal Alumina company officials say it has bauxite deposits. What will will do with it? Over the years, it has only degraded our land, forest, streams and rain.” said Rupdhar Majhi, a native of the village. “Karanjkupakhal is one of many tribal villages which are at the frontline of the effects of opencaste bauxite mining. But their plight goes unnoticed and often ignored and suppressed by the goons of company as well as by the state government,” adds Debaranjan Sarangi, an activist working with the adivasi communities of Kashipur. Credit: Abhijit Mohanty

For UAIL, the deep bond of the adivasis with Baphlimali is meaningless; its sole objective is to make billions in profit each year by extracting bauxite from the heart of the hill – the sacred site of adivasis.

In Kashipur, it has been reported that opencast bauxite mining activity by UAIL has caused environmental degradation in the region due to deforestation, biodiversity loss, wasteland generation, dust and noise pollution, pressure on local resources and soil erosion. Local communities have complained that they are suffering from several health issues like brittle bones, tooth and gum infection, lumps of dead skin and respiratory problems. 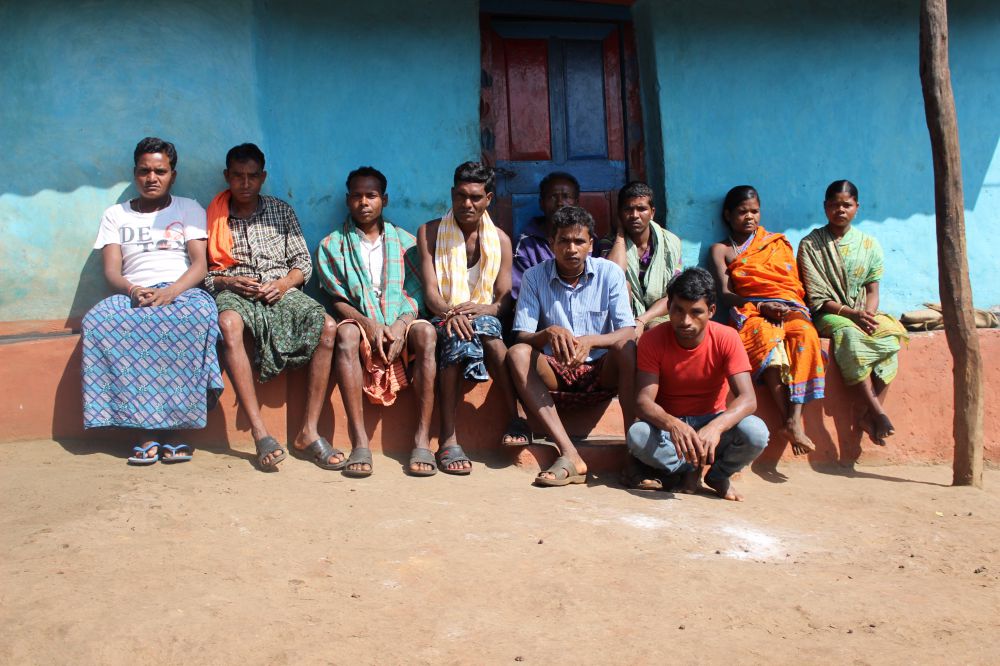 “Mining is polluting everything here. It’s affecting our land, polluting our water. Life has become miserable like never before”, said Dhanurjaya Majhi, a farmer of Karanjkupakhal. Credit: Abhijit Mohanty 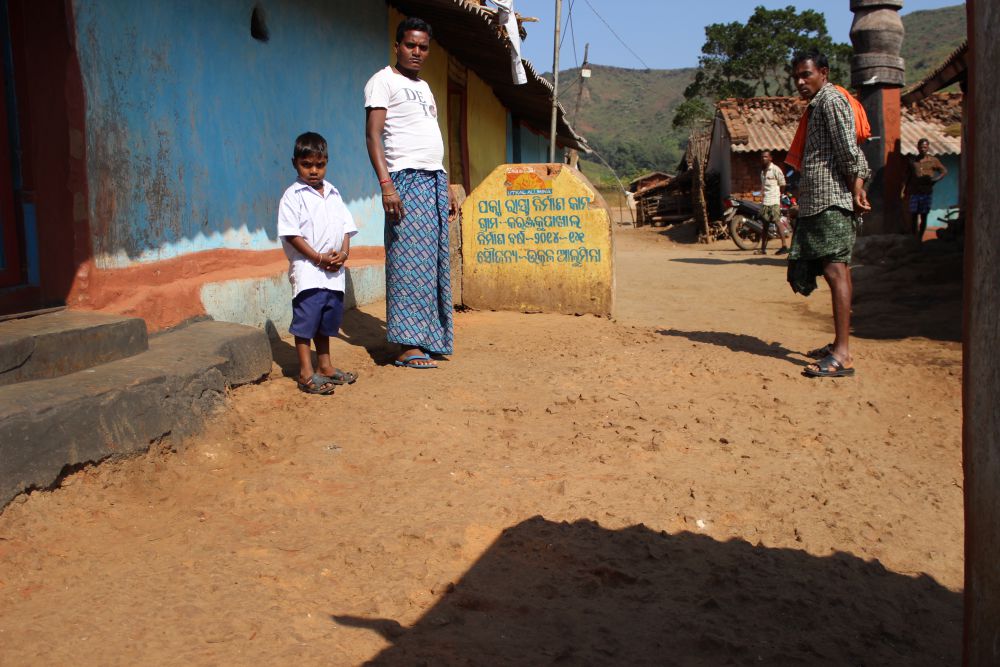 “In 2000, the officials of Utkal Aluminium Company visited our village and assured us that all kind of development works like school, medical facilities, sanitation will be taken up in the village. But nothing has been done in this regard so far. Now if you raise the issue, you will be arrested. In 2015, the company has constructed a cement road in the village. The quality of work was so poor that now you can hardly find any sign of that road. Just look down and see yourself,” said Jayanta Majhi of Karanjkupakhal village. Credit: Abhijit Mohanty 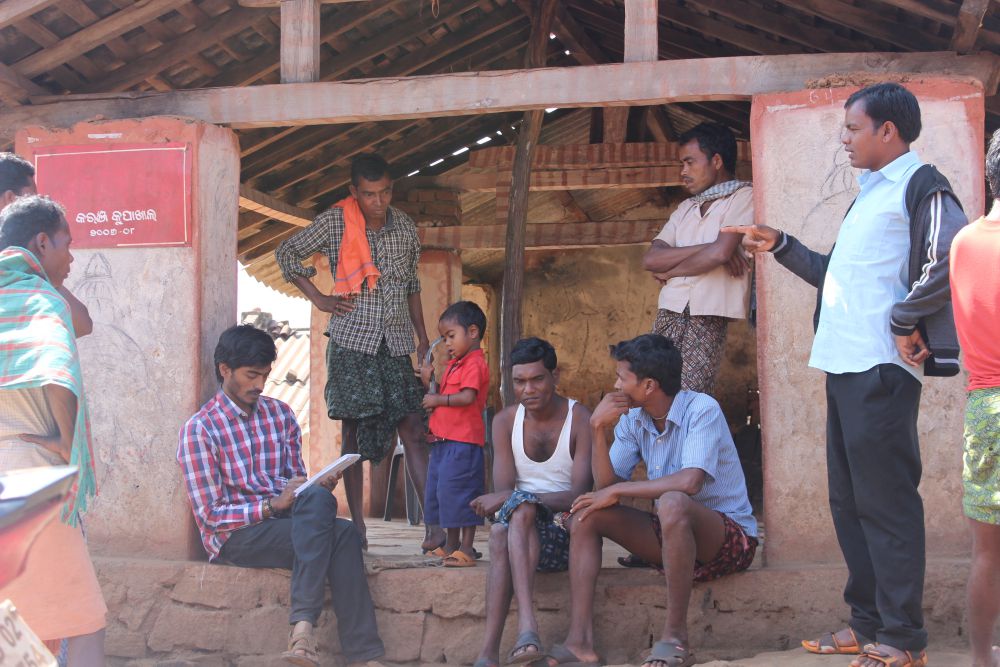 Dalu Majhi works as a teacher in Karanjkupakhal village. He says, “In 1973, a primary school was sanctioned for the village. But till date, there is no school building in the village. Now, the school is running in the gudi ghar (village deity hut). What is the government doing? They are ignoring the issue. Villagers have filed a written complaint to the block development officer of Kashipur but to no avail”. Suman Jhodia adds, “Government is not establishing a primary health centre, there are no doctors to provide healthcare facilities in the region, but it has set up a police station and a police camp there overnight. For whom? It is for the company. Not for the people.” Credit: Abhiram Jhodia 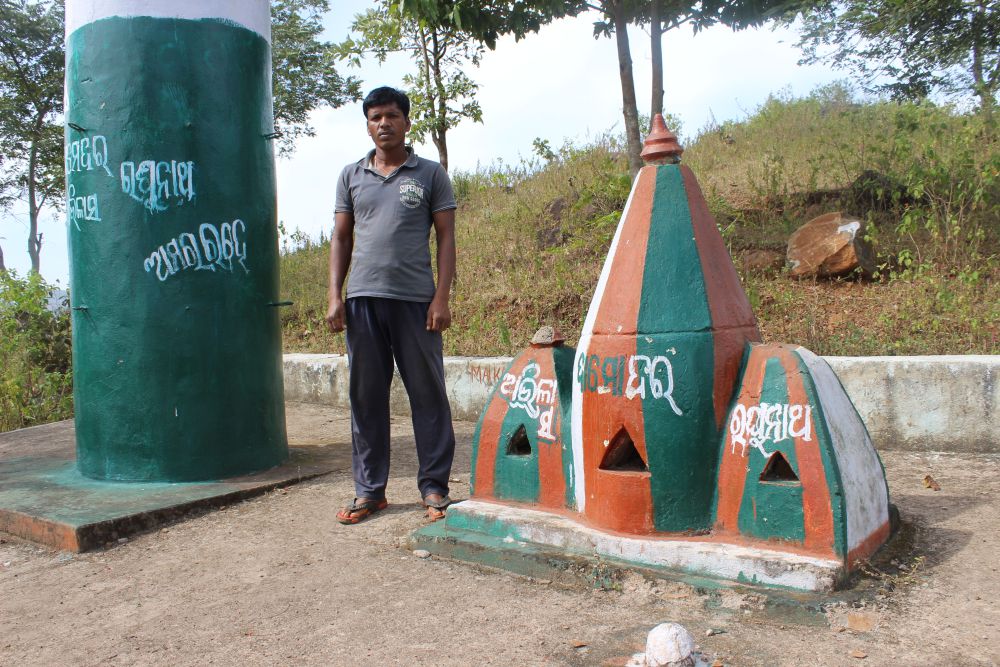 Subhas Jhodia standing near the tombstones of Abhilash Jhodia, Damodar Jhodia and Raghunath Jhodia, the three killed in police firing during a peaceful dharna against mining at Maikanch, Kashipur. Subhas is the younger brother of Abhilash. Credit: Abhijit Mohanty

In order to extract bauxite ore deposits through opencast mining, the above ground vegetation is completely removed. This means removal of several tonnes of low grade ore which is dumped on the nearby vegetation along the steep slopes. The mining activity leaves a toxic residue known as ‘red mud’, a by-product of bauxite that percolates into the soil. Farmers complain that flash floods and rains brings red mud to their agricultural land, reducing its fertility. 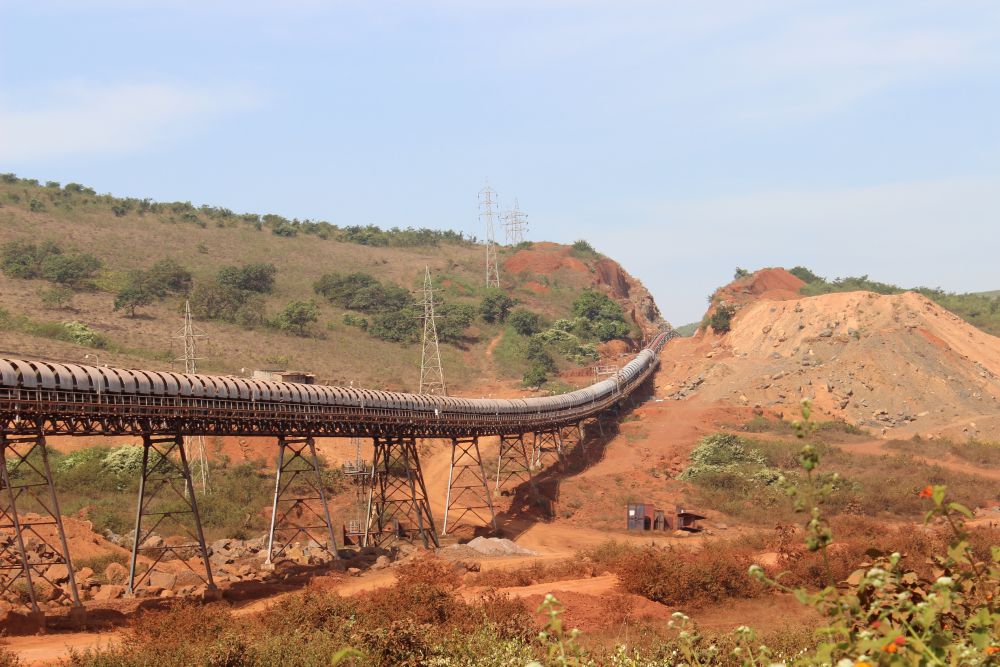 “The conveyor beltline work was started in the last year but we were not consulted by the company officials. The company has taken around 20 acres of land from our village. We used to cultivate finger millet on these lands earlier. Company babus (officials) said we will get our due compensation. But we have not received any compensation till date. We have been requesting to the company babu to provide compensation but they are not paying any heed to us. And we cannot approach the district administration. They are least bothered about the community,” said Nua Majhi of Lundrukana village. Credit: Abhijit Mohanty

There is also a heavy loss of pristine natural vegetation due to the mining activity, which severely affects the local biodiversity. The flora found in Baphlimali consists of 560 plant species including eight species of rare and threatened plants. UAIL, on its part, has claimed to have taken up plantation activities in the periphery areas. However, conservationists have said that UAIL has planted acacia, which is not a native species and is thus adversely affecting the local ecological setting of the region. 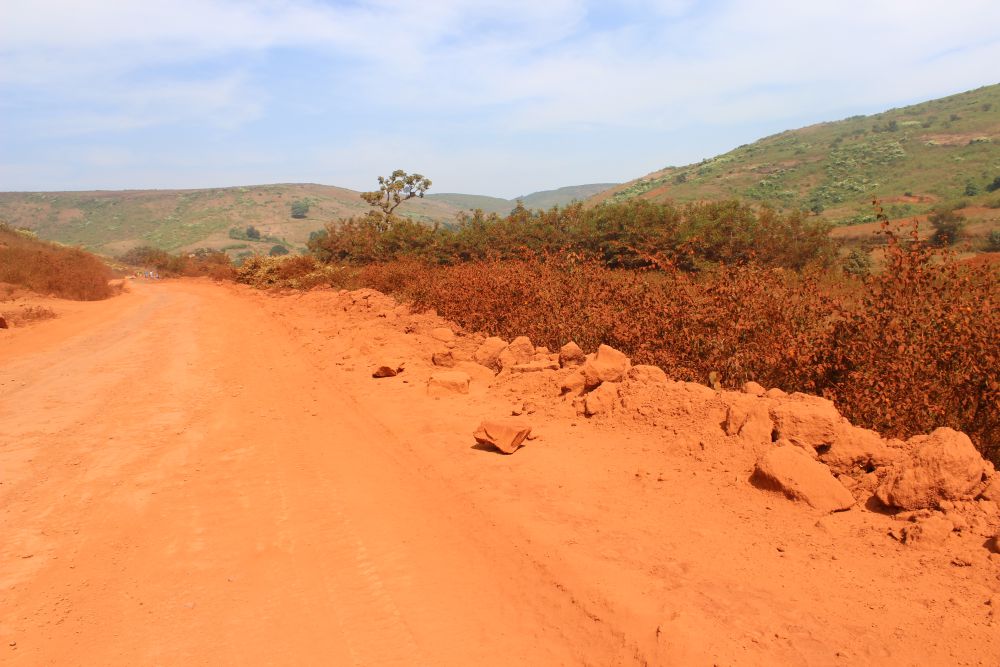 “The problem of dust increases during summer months. At this time, the heat is extreme. Wind blows day and night and brings dusts into our houses, onto our food plates. Company officials hardly get water to sprinkle on the road”, said Dhanurjaya Majhi, a local youth. Dust pollution due to ore transportation is affecting the vegetation cover. As per the mining regulations, water is to be sprinkled on roads to prevent spreading of dust. However, this sprinkling was not as frequent as required and did not effectively prevent dust. Credit: Abhijit Mohanty 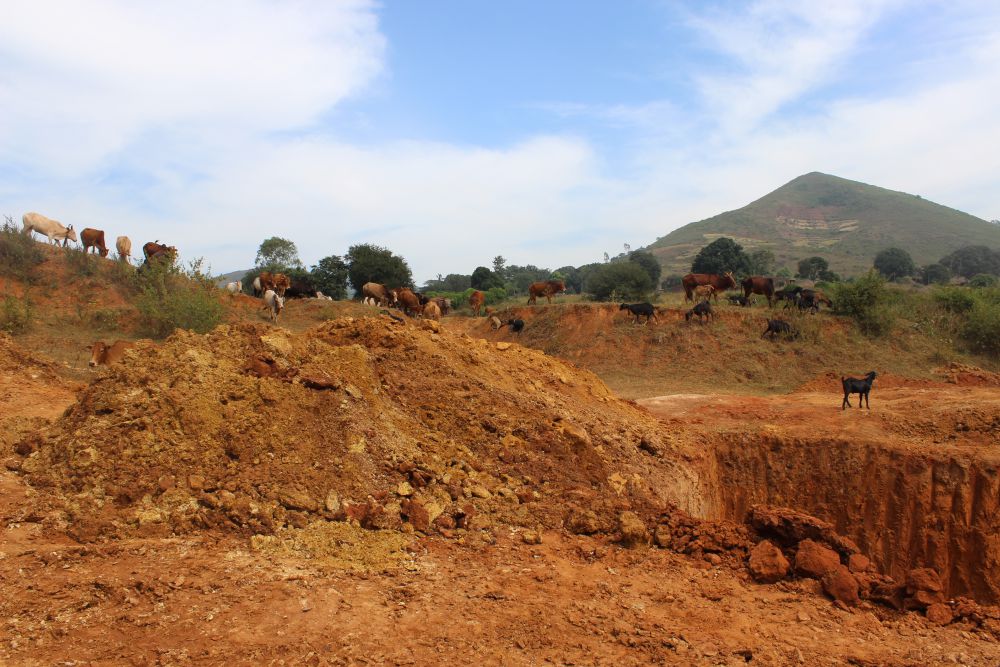 “Domestic animals like sheep, goat, cow and buffalo used to be a very important source of income for us. Ten to 15 years ago every household in our village used to keep these animals. But these days there is a lack of pasture land in the vicinity of our village. You can see dust is everywhere. This is affecting the pasture land. Our animals are not getting enough fodder. They are falling sick very often now a days”, said Joginder Jhodia, a herder of Lundrukana village.

Sumani Jhodia, a renowned tribal leader of Kashipur in Odisha, said, “The plight of women is worsening as they have reported an increase in domestic work hours since the disappearance of the forest, shrubs, bushes and contamination of water sources resulting from bauxite mining. Now they have to compete with the migrant workers to access fuel, firewood and fodder. This is something we have never seen earlier. It is only happening now due to mining”.

There is an increased influx of labour from outside the region to do jobs such as driving trucks, mining and operating heavy machinery. These workers and their families reside on the mining sites and in nearby labour camps. They use the neighbouring forest for fuel wood, and local streams and wells for their water needs. This dependence has led to a large scale thinning of the adjoining forest and has resulted in conflicts with the local communities over access these resources. 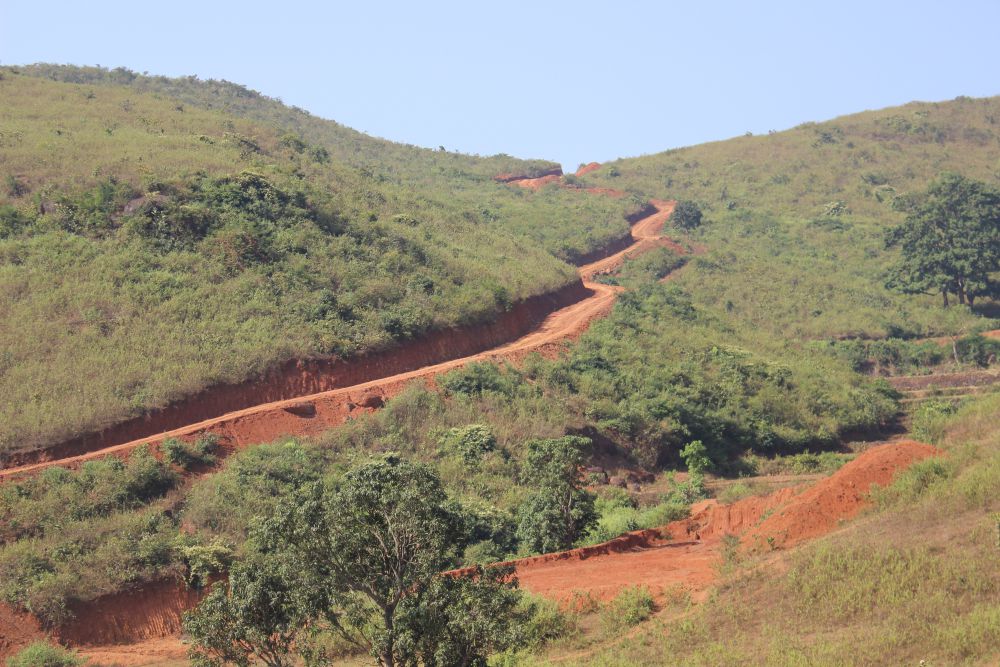 Forest fragmentation due to road construction is causing serious disturbance to wildlife. Road constructions through forest in the earlier remote areas provides access to illegal tree felling and poaching of wildlife leaving a permanent negative impact on the biodiversity of the region. Credit: Abhijit Mohanty 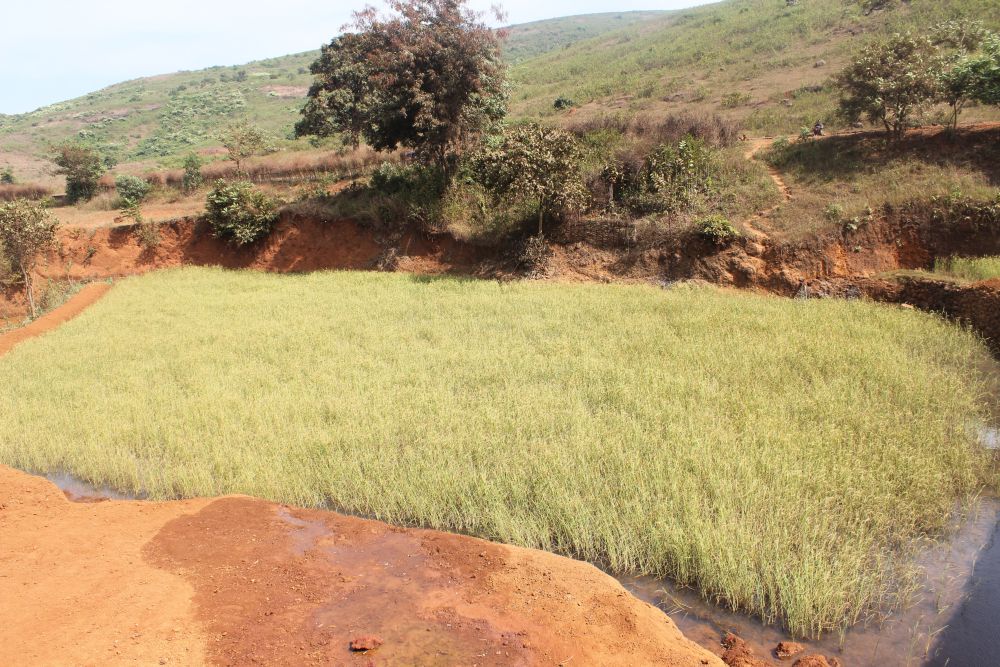 “Earlier the land was fertile. We used to harvest bountiful of paddy, millet, cereal, pulse. But now the yield has reduced substantially. Farming is no more self-sufficient. That is the reason youth are migrating to faraway places like Andhra Pradesh, Kerala”, said Sadhav Muduli, a farmer of Lundrukana village. Credit: Abhijit Mohanty 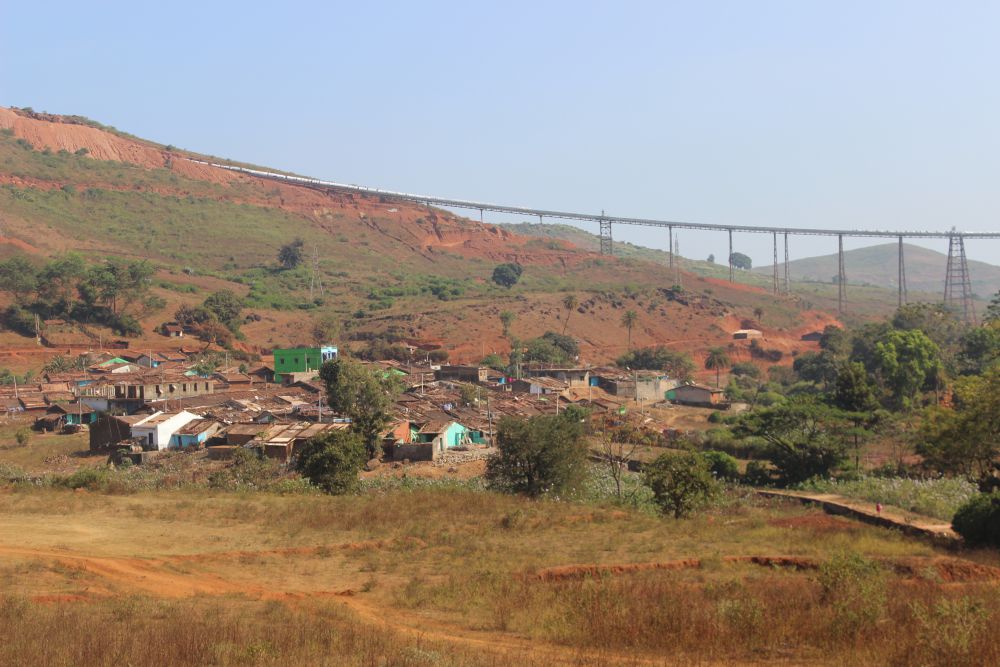 Paikkupakhal is yet another village located near the mining areas and people here lack access to potable drinking water. Earlier roads connecting settlements and villages like Paikkupakhal were much simpler and narrower before introduction of mining activity. However, for accommodating mining traffic, which is over 95% of the total traffic at present, they have been widened by deforestation and forest encroachment and at many places maintained regularly by removing soil along the forest roads. Credit: Abhijit Mohanty

“Three tonnes of bauxite, a thousand tonnes of water and huge quantity of electricity are required to extract one tonne of alumina. In addition, dams are required for such massive quantity of water and electricity. In the process, poor tribals lose their identity in bauxite mining,” said Srinibash Das, a development professional associated with the adivasi communities of the Kalahandi Balangir Koraput region in Odisha. “It is really a matter of concern that our so-called politicians and government officials are deliberately ignoring the issues of adivasi. As if industrialisation has become a buzz word for them.”

“With India’s economic policies inclining towards potential market forces and liberalisation ideologies, the rights of people over their resources and democratic ways of life may continue to be threatened,” said Biranchi Patel, who is associated with Agragamee, a local NGO based in Kashipur. The capitalist agenda that has ravaged the world with reckless destruction and disrupted socioeconomic and political stability in the name of development should not be repeated here in Kashipur.

Abhijit Mohanty is a Delhi-based development professional. He has worked with the indigenous communities in India and Cameroon, especially on the issues of land, forest and water.