In Peru, the Political Elite's Lack of Accountability Made it Necessary for the Streets to Rise

The scale of the mobilisations and the public's growing discontent with the current political climate, combined with an already difficult situation due to the pandemic, has opened Pandora's box. More than a decade since the famous “Peruvian Miracle” of economic growth, the country now faces the worst economic crisis in Latin America this year. High levels of poverty, inequality, and informality have exposed the failings of the Peruvian economic model. In the middle of an unprecedented economic and health crisis, the power vacuum in Peru’s political institutions has facilitated the conditions for the powerful mobilisation of the Peruvian people to erupt.

Martin Vizcarra’s ousting lit the fuse of the street protests. His successor, Manuel Merino, was forced to resign amidst massive mobilisations and a second president was elected by Congress within a week. What this crisis has revealed is a deep divide in society, particularly between the younger generations, and the political leadership.

When these lines were written, Peru was a country where two of the three state branches had nobody in charge. An executive branch without a president or vice-presidents, no head of the Council of Ministers, and without an acting cabinet. A legislative branch without a president, nor an executive council. On Sunday night, the Congress failed to form a new council in a vote on a single, supposedly consensual list, headed by Rocío Silva Santisteban, a leader of the Frente Amplio and a human rights activist.

How did we get to this chaotic situation? On Monday, November 9, the Congress elected in January of this year succeeded in doing what it failed to achieve a month ago: removing President Martin Vizcarra who, in turn, succeeded Pedro Pablo Kuczynski in March 2018. They moved forward with their goal of removing the president from power under the cover of fiscal investigations showing signs of corruption by Vizcarra during his time in the regional government of Moquegua more than a decade ago.

Several years ago, the term “coalition of independents” was coined to explain the functioning of Peruvian political parties, whose politicians converge on political projects but then jump ship as soon as it is no longer in their interest. There are no ideologies, programmes, or long-term projects. There is no political elite, but rather a group of people who alternate power without consolidating themselves over time.

What happened a week ago replicates the workings of Peruvian electoral politics, a motley coalition of interests whose only common ground was Vizcarra’s departure.

Congress members representing entrepreneurs from universities that closed down for not reaching minimum quality standards, companies that want to exploit natural resources in forbidden areas, and businesses of all kinds. Congress members who want to continue their political career opposing the current legal system and others who want to escape the multiple legal proceedings they must face. In fact, one possible reading of Vizcarra’s removal is that some politicians in these sui generis parties have sought to reverse the timidly implemented political reforms that, with modestly positive electoral results in the presidential elections next April, would mean the end of their organisations and thus the main support for their way of life.

On the flip side of this opportunist coalition is a president like Vizcarra who did not understand that he needed a parliamentary bloc of his own to defend himself from possible attacks by Congress. He did not even present a list of his own, nor did he build the political alliances that would allow him to eventually confront Congress. It was clear that the possibilities of stabilising the last stretch of his government lay in following a presidential coalition model with a cabinet expressing a coalition that would give his government sustainability.

At the end of September 2019, Vizcarra dissolved Congress, in keeping with his presidential powers, in order to defuse the conspiratorial attempts of Fujimorism. Shrouded in a wave of popularity after the dissolution, the president chose not to submit a list for the January 2020 congressional elections. Without a presidential ticket and with an unusually high number of invalid votes and abstentions, these elections were dominated by fragmentation with the most-voted parties receiving barely 10 percent of the votes. Elected congressmen without parliamentary experience completed the picture we are now seeing.

With no government bench, Vizcarra quickly wore down his relationship with the new parliamentarians. When the protection afforded by the possibility of dissolving the Congress ended last July, because the constitution prevents it from being decreed during the final year of government, tensions escalated to the extreme and, since August, the attacks by Congress members have been unceasing.

The departing coalition was weakly structured and the government of Manuel Merino – the president of the Chamber of Deputies who replaced Vizcarra — suffered the same problem. The first alarm bell was the inaugural speech of the cattle-raising entrepreneur from the north of the country, lacking in ideas and full of clichés, unable to recognise the political moment the country was going through. Merino promptly disappearing from the public scene as soon as he received the presidential sash was the second sign.

Unable to keep his promise of a “broad-based” cabinet, he decided to take refuge in the government palace. The appointment of Antero Flores-Aráoz as his head of the council of ministers (“prime minister”) confirmed the impossibility of convening political personnel beyond the boundaries of the country’s most conservative — and even racist — right.

The bulk of the cabinet members were recruited from two main sources. The first was the Coordinadora Republicana, a space organised around conservative politicians, operators and journalists revolving around Fujimorism, who were relegated from the political scene following the closure of the Fujimorista Congress and the fall from grace of its leader, Keiko Fujimori. Representatives of the country’s main business associations were the other — minority but key — sector whose members joined the cabinet. Three ministers came from these sectors, with Patricia Teullet, General Manager of the National Confederation of Private Business Institutions (CONFIEP), the guild that represents the large Peruvian business community, being the most visible figure. This same institution issued a statement supporting Merino’s presidency in its initial moments.

Nonetheless, neither the de facto government nor those who opposed Vizcarra’s removal, nor the most diverse of analysts foresaw the volume that the mobilisations led by high school and university students, beginning on Monday night after the vote on the removal, would acquire. 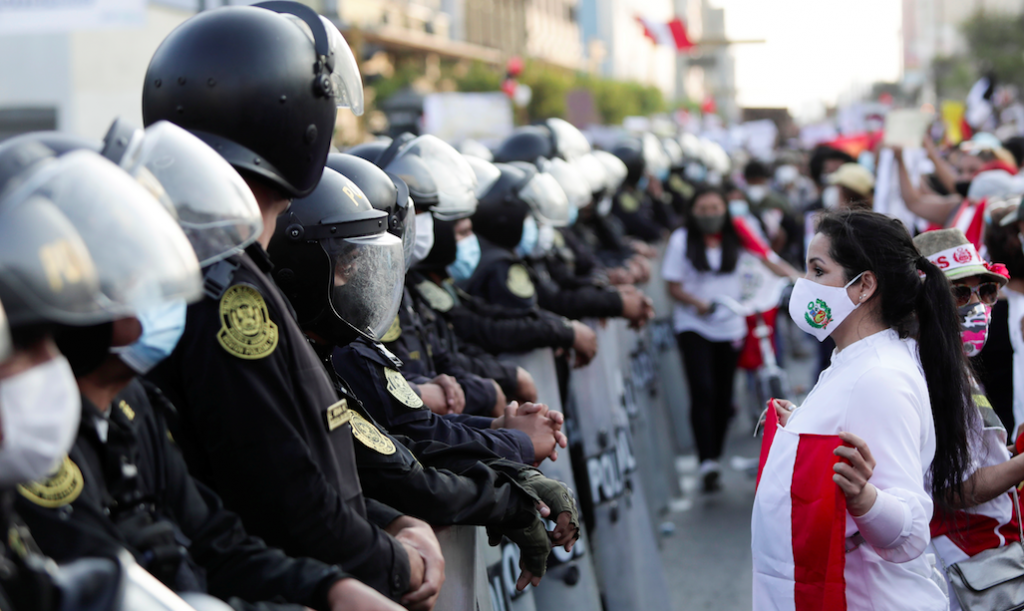 A woman holds a national flag while standing in front of police outside Congress after Peru’s interim President Manuel Merino announced his resignation, in Lima, Peru November 15, 2020. Photo: Reuters/Angela Ponce

If Merino and those who accompanied him on this adventure thought that Vizcarra’s departure was the end of their problems, they were wrong. The mobilisations multiplied rapidly. Social networks functioned as the main organisational tool and many techniques were adopted from mobilisations elsewhere. The lessons learned from mobilisations in Chile, but also from Hong Kong, were useful to those who marched these days. Tactics such as the use of laser pointers against the police, mechanisms to deactivate tear gas bombs and the use of decentralised mobilisations to force the police to disperse their efforts were part of the adopted strategies.

It should be pointed out that, although some unions were present in the protests, the main national unions only decided to join as of Thursday. In recent days, the General Confederation of Peruvian Workers (CGTP), the country’s main trade union, has called for a first major mobilisation for next Wednesday. If the political crisis is still active by then, we could see a first meeting between the youth movement that forced Merino to leave power and the organised popular sectors.

The repression on Thursday was excessive, leaving a great many injured, some of them seriously, but the repression on Saturday was simply criminal. As time passed and the public eye witnessed Merino’s “interim” government falling apart, the police forces became more and more repressive as political control faded away. They used not only tear gas, but firearms with lead pellets and apparently even larger calibre weapons. On Saturday night, two students, aged 22 and 24 were killed, apparently by members of the national police. More than 60 people were injured and an equal number disappeared. Some of the latter have been located since, but some remain unaccounted for.

Vizcarra’s downfall is similar to that of Paraguay’s former president Fernando Lugo, who was hastily removed from office in 2012, but the weekend was more like Argentina in 2001, a critical year marked by huge political instability and street protests.

The scale of the mobilisations and the public’s growing discontent with the current political climate, combined with an already difficult situation due to the pandemic, has opened Pandora’s box. A proposal for constitutional change is spreading beyond sectors of the left, and now includes other social and also political sectors. The search for a new constitution is also not limited to a reform of the Peruvian economic model. The crisis unleashed by Merino and the Flores-Aráoz cabinet has shown it is impossible to reform the political system. All the projects promoted by the Peruvian Congress since the return to democracy following the fall of Alberto Fujimori in 2000 have failed. The political reforms that have been implemented are at best incomplete, and at worst a convoluted way of trying to make sure everything remains the same.

A final note on what has happened so far is that the crisis shows the decline of a generation of politicians who, as the short-lived Flores-Aráoz admitted, do not understand what is happening in the street, nor what the protesters want. Generally speaking, Peru is a country governed by politicians far above the average age of the population they claim to represent. They are unable to connect with the voters’ desires and do not understand their forms of political representation. The young people who have come out to protest are the first generation to have lived their entire lives under democratic governments. It is impossible to dissociate this fact from their political expectations.

This disconnect between the government and the street was exacerbated by an extremely conservative cabinet that assumed power and prioritised a hierarchical and authoritarian vision of politics. The mobilisations should retire a political generation, but it is even more important that they serve to remove the reactionary sectors — sectors that have been losing weight in society for several years but have found shelter in the margins of public opinion and the Peruvian state.

At the close of this article and in a second vote, Congress managed to form a new executive council whose president will become the new president of the country. The elected parliamentarian is Francisco Sagasti, who belongs to Julio Guzmán’s Purple Party and is a well-known academic. A specialist in foresight and the driving force behind various initiatives to rethink Peru in the run-up to the bicentenary, Sagasti will surely be able to form a large cabinet that will allow him to govern until July 2021. In terms of programmes, the country will continue to be guided by the same coordinates as in the last two decades, after the brief ultraconservative outburst of the de facto government.

Translated into English by Tim Swillens.

Carlos Alberto Adrianzén has a degree in Sociology from the Pontificia Universidad Católica del Perú. He currently holds a scholarship from the National Council of Scientific and Technical Research (Conicet) of Argentina and is a doctoral student at the National University of San Martín (UNSAM) in Buenos Aires.

This article, first published on Nuevo Sociedad, was translated and published on Progressive International’s Wire platform.