When it Comes to Manual Scavenging, Enacted Laws Have Persistently Failed

The Prohibition of Employment as Manual Scavengers and their Rehabilitation (Amendment) Bill, 2020 continues to tread the same flawed path as its previous versions of 1993 and 2013 with little to no effect on providing succour to sanitation workers.

A new (amendment) bill to prohibit manual scavenging is on the anvil this year. Such amendments are usually routine policy revisions, to set the course right again. However, the need for a third prohibition bill is proof that the first two, legislated in 1993 and 2013, have been dismal failures, not only in policy, but also in the implementation of the measures spelled out in them. Nevertheless, this Amendment Bill of 2020 continues to make the same grievous errors as the first two.

Several experts have already pointed out the lack of intent, the hollowness, and the dishonesty of the new bill. Here, our purpose is to emphasise its crucial flaw, to wit, its refusal to acknowledge the extreme violence, and the absolute violation of human rights, that manual scavenging is. We emphasise that it is genocidal violence. Our hope is that in acknowledging the true scale of the crime, the country will take honest steps to end it.

There are indeed several serious shortcomings in the new bill, but the most egregious of them, as in the earlier ones, is a lack of understanding of what the bill should aim to do, namely the liberation of ‘manual scavengers’. The failure to focus on the exploitation of human beings, in other words, the absence of elementary ethics and morality, rendered the first two bills ineffective. It is this absence, again, that presages yet another failed effort to root out what is arguably the most cruel and demeaning work of all, cleaning human excreta.

These failures manifest themselves first in denial. Governments and municipalities quibble endlessly about the number of people involved in manual scavenging.

They refuse to acknowledge disease and death, hence elementary compensation, guaranteed by the earlier bills, is rarely ever provided to the victim’s family. Denial sometimes assumes ludicrous proportions, for instance, the claims of the Delhi government that manual scavenging has already been eradicated under its jurisdiction. 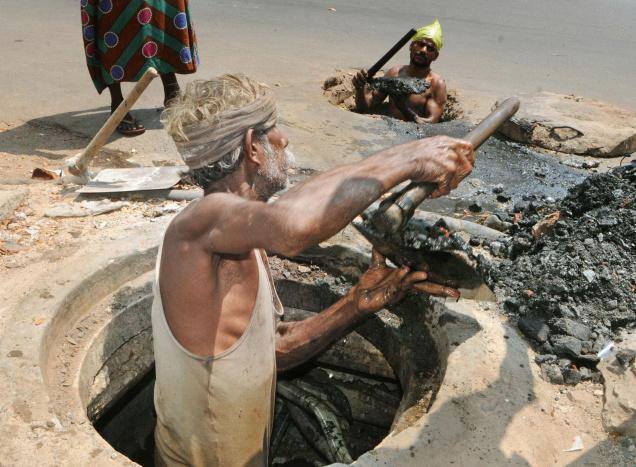 Even to this day, both Central and state governments are yet to come up with proper figures on the number of people involved in manual scavenging. Photo: Facebook/Against Manual Scavenging

This denial is intentional, for it is a consequence of the casteist structure of the Indian society. It is an indisputable fact that almost all the people, women and men, involved in manual scavenging are Dalits. It is work enforced on a section of the population defined by their caste; yet the word ‘caste’ fails to make an appearance in the text of the Bill. Thus, it fails to address the root cause of this rot in the society, and hence cannot be expected to solve it.

It is also a fact that the Indian public spares not one thought for people who clean. Sanitary napkins, used condoms, and every kind of human residue is discarded at will. Garbage bins and mounds of rubbish in every street corner are littered with faeces, exposed, abandoned in plastic bags, wrapped in newspaper. Thus, almost all people involved in any kind of cleaning of public spaces, come into contact with human excreta. Sweepers, garbage collectors, waste pickers – amongst whom millions of children – and those who sort and recycle, are all, technically speaking, manual scavengers. The problem with the Amendment Bill starts here, a refusal to include all those who need protection under the law.

Central to the horror of manual scavenging is the people who clean sewage lines, septic tanks, and open-pit toilets. Central is their status as ‘lower’ beings in an insane scheme, which first foists this occupation upon them, and then turns around and declares them ‘unclean’, at birth, to be denied even water, forced to live separately in degraded spaces, their children abused, discriminated against and denied every fundamental right, the women attacked. The exploitation is immense, our hearts should boil over in rage. 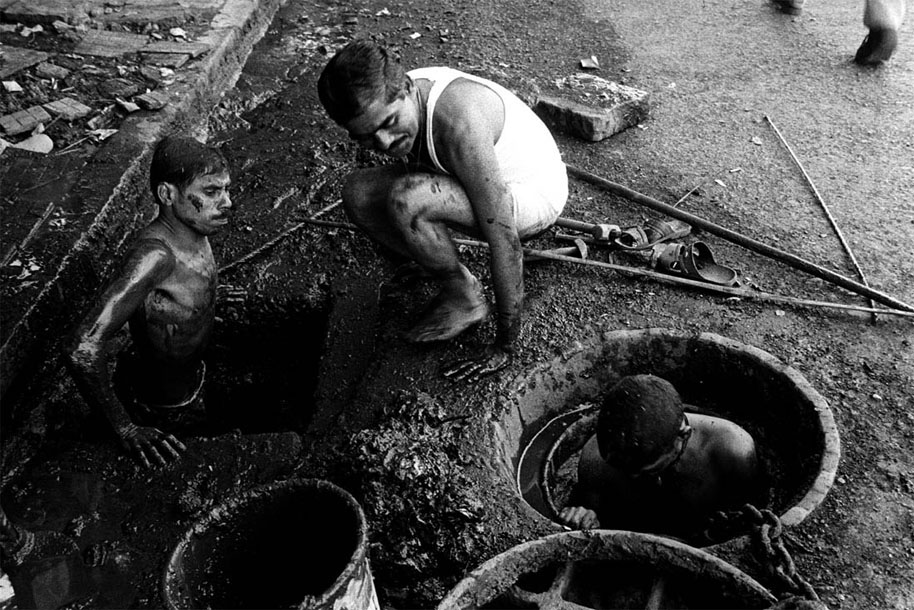 Despite the fact that caste is central to the horror of manual scavenging, it has often been overlooked by policymakers. Photo: Sudharak Olwe/Facebook/Safai Karmachari Andolan

Here are the facts. The average life expectancy of a sanitation worker is less than 50 years. Men who clean sewage drains and septic tanks die before they reach 40 — an analysis of such deaths in 2017-2018 showed that the average age of a sanitation worker was 32 years. The cause of death is predominantly occupational, asphyxiation in a septic tank, drowning in sewage, TB, cholera, meningitis, and various cancers.

A large percentage of sanitation workers suffer from debilitating diseases such as asthama, rotavirus, hepatitis, and terrible skin disorders. There is no medical or life insurance. With many workers on contract to private companies, salaries have plummeted, for instance to Rs 8,000 in a metropolis, such as Hyderabad. Alcoholism is rampant among men; alcohol is what steels you to enter a sewer line. Sanitary workers chew tobacco, it numbs the senses. Oral cancer is a consequence; indeed, it is the visible body sign on the sanitation worker produced by the stigma of caste.

This is genocidal violence visited upon a specific group, defined by birth, according to Article II of The Genocide Convention (specifically, clauses (a), (b) and (c)):

“In the present Convention, genocide means any of the following acts committed with intent to destroy, in whole or in part, a national, ethnical, racial or religious group, as such: (a) Killing members of the group; (b) Causing serious bodily or mental harm to members of the group; (c) Deliberately inflicting on the group conditions of life calculated to bring about its physical destruction in whole or in part; (d) Imposing measures intended to prevent births within the group; (e) Forcibly transferring children of the group to another group.”

Violence assumes monstrous proportions in times of emergency, such as the COVID-19 pandemic today. Sanitation workers have been pressed into extra duty, without adequate protection or training, or remuneration. The Amendment Bill, originally intended to be rushed through in the monsoon session of the parliament, fails to address these issues, even in the middle of the pandemic!

Thus, the heart of the crime of manual scavenging is a violent denial of human rights, as Ambedkar long ago declared. This truth, the Bill does not, and will not, acknowledge. It thinks the problem is a technical one. Surely there are also such problems; indeed, there are complicated problems to be overcome in the treatment of sewage and in the safe disposal of garbage. Vienna and Beijing have solved these engineering problems to good measure. Here, on the other hand, the capital of the country, Delhi, which boasts of having landed a spacecraft on the moon discharges over half its sewage, raw, into the Yamuna.

Nonetheless, it was not an engineering problem, but a human rights one, that allowed us to accept the death, without a thought, of over 110 young men in septic tanks and sewage drains last year, 64 of them in the capital alone. It is our contempt for human rights that allows us to walk on, unmoved by the sight of human beings cleaning excreta from railway tracks, with the most primitive equipment imaginable, a broom and a basket.

In order to get rid of the crime, and the shame, of manual scavenging, we must actively work to translate this understanding into action. It will need a civilisational response, above and beyond, all political, social and religious ideologies.

To get started, we should demand the formation of a national commission, headed by a person of vast experience and reputation, whose mandate is to completely annihilate manual scavenging from this land, and to deliver justice to the many millions of our fellow citizens who have ever been engaged in it.