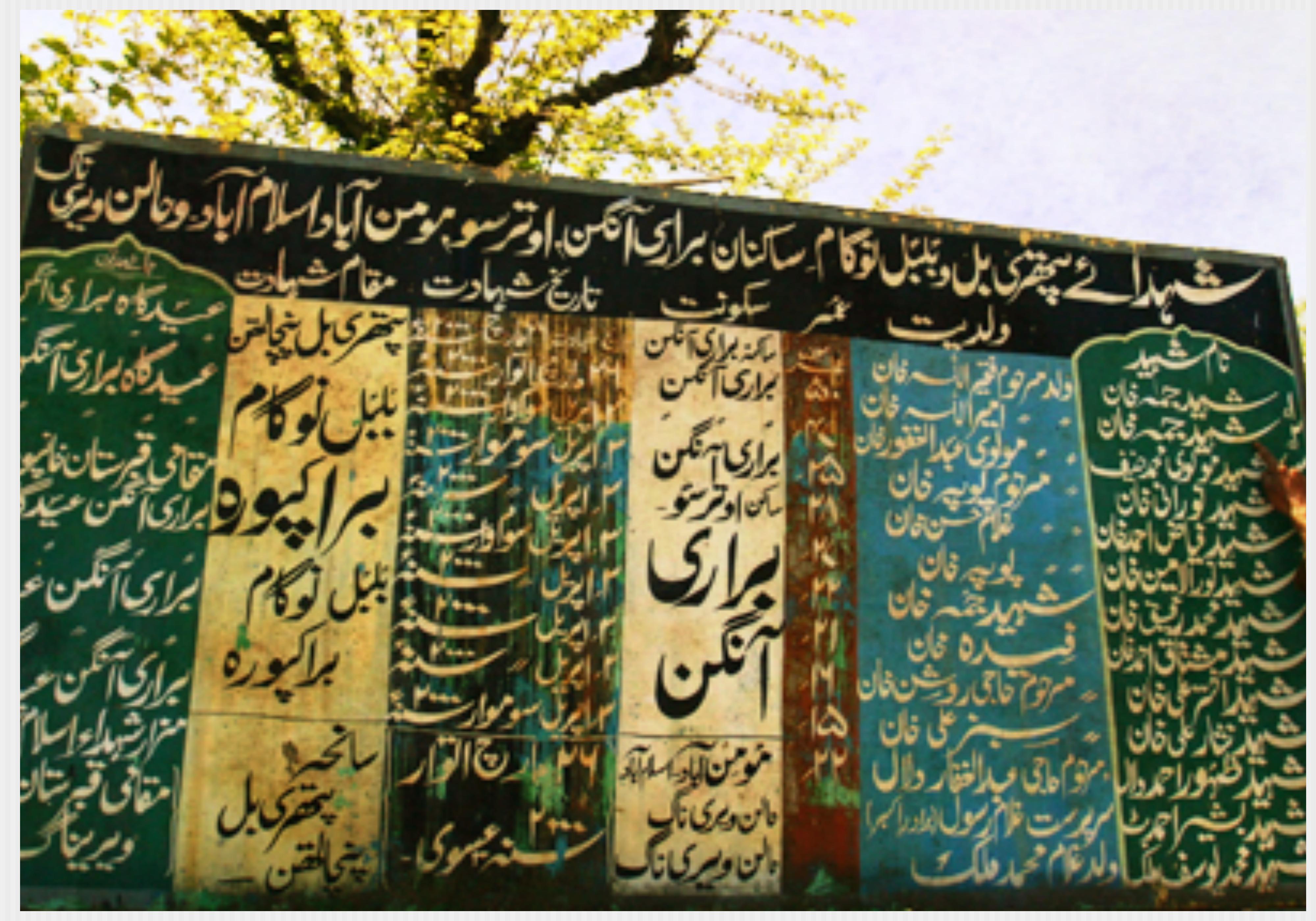 A board with the names of the victims of the Pathribal fake encounter and the Brakpora firing incident which followed when locals staged a protest march demanding an inquiry into the Pathribal killinhs. Credit: Twitter

New Delhi: The Supreme Court has once again given a glimmer of hope to the kin of five villagers  killed by the army at Pathribal in 2000 by admitting a plea challenging a Jammu and Kashmir High Court verdict that upheld the Army’s decision to close proceedings against five soldiers involved. The encounter, which rocked the valley 17 years ago, was confirmed to be fake by the Central Bureau of Investigation.

The apex court on August 18 issued notice to the Centre, the Jammu and Kashmir Government, the army and the CBI giving them six weeks to respond to the petition.

The petitioners contend that the encounter was fake and, as per the CBI’s findings, had been deliberately staged by the army “to save their face in view of public criticism of their operational efficiency and lack of control in the area in the wake of the Chittisinghpora massacre” of Sikh villagers just five days prior to it.

According to the petition filed by the kin of the victims, the CBI charge-sheet had noted that the five men had been killed in cold blood by officers of the Rashtriya Rifles. Further, forensic tests by a government laboratory had established through DNA matching that the five murdered men were local villagers and not Pakistani militants, as had been claimed by the army in the FIR it lodged soon after the ‘encounter’.

Moreover, the lab test implicated the army and government in the deliberate fudging of DNA evidence in a bid to cover-up the crime and the CBI had also indicted the Rashtriya Rifles for fabricating as well as destroying evidence.

A ‘classic case of impunity’

Appearing for the petitioners, counsel Nitya Ramakrishnan questioned the closure of the case by the army.

She said that following the CBI’s indictment of the five officers, the Supreme Court had in 2012 allowed the army to choose the “venue” of the trial between a criminal court and a general court martial. The apex court had also said that the army’s decision was subject to the Central government’s concurrence.

But instead of doing either, the petitioners said that at the level of commanding officer itself, the case was closed by resorting to a provision of army investigation for offences under the Army Act. The kin of the victims therefore charged that the commanding officer had no power to wipe out or judge the CBI charge-sheet nor play any role other than to take a call on the venue of the trial – a call that had to be confirmed by the Centre. They also said that the army action in closing the case was mala fide and in contravention of the Supreme Court’s directions, and termed this a `classic case of impunity’.

Additional Solicitor General Maninder Singh said the government would file its response in the matter.

The special leave petition filed by the petitioners had impugned the order of a single judge of the Jammu and Kashmir high court, dismissing, in limine, a writ petition against the decision of the army to close all proceedings against the five officers.

The petition had noted that the state police had found it to be a fake encounter and a later investigation by the CBI had also squarely indicted the five soldiers as responsible for the murder of innocent villagers.

The CBI charge-sheet, it submitted, had also shown that the army story of an encounter with Pakistani militants was a lie. To add to this, independent forensic reports of the Centre for DNA Fingerprinting and Diagnostics (CDFD) Hyderabad and the Central Forensic Science Laboratory, Kolkata had established through DNA analysis that the bodies of those burnt and killed after the encounter were of five poor villagers who had gone missing at various locations in Anantnag district just before the ‘encounter’.

The bodies of the victims were found at Panchaltan forest on March 26, 2000 by five independent witnesses belonging to the state police. Thus the victims’ identity and the identity of the killers was not in doubt and was established by record. There was also direct evidence of their abduction and illegal custody by army officials in the form of statements of villagers and the kin, on the basis of which a FIR No 16/2000 for abduction was registered on March 26, 2000.

According to eyewitness accounts, the firing took place between 5-45 a.m. and 9-30 a.m. on March 25, 2000. The army was seen firing on the Zoonitangiri hilltop in Panchalthan Forest, Pathribal adjoining the village of Wuzukhan. The army men were also seen carrying white plastic cans filled with ‘oily substance’ to the place of incident, the petitioners had insisted.

Later the army handed over the bodies of the five deceased to the police. The relatives were able to identify the dead bodies which had been burnt beyond recognition through clothing and peculiar marks on the bodies during exhumation.

The Army, the petitioners said, tried to portray the incident as an ‘encounter’ and claimed that the deceased were terrorists of Pakistani nationality and belonged to the Lashkar-y-Tayyeba. However, word quickly spread in the area that the five men who had been murdered were not terrorists but rather innocent locals who had gone missing over the previous two to three days.

Upon a petition by the kin of the deceased, the chief judicial magistrate of Anantnag had ordered the deputy superintendent of police of Anantnag to conduct an enquiry. The DSP got the five bodies exhumed on April 6-7, 2000. DNA samples were taken from the bodies, and from the relatives of the dead men, and were sent to CDFD Hyderabad and CFSL Kolkata for analysis.

DSP’s probe had established that encounter was fake

In his report dated April 11, 2000, DSP Abdul Rehman Sheikh, who had conducted an independent investigation, found that the encounter was fake and that those killed were local civilians and not militants. The army officials had deliberately staged a fake encounter to save face in view of public criticism of their operational efficiency and lack of control in the area in the wake of Chhittisinghpora massacre, the petitioners had charged.

The CJM Anantnag had then ordered the local police to register FIRs based on complaints given by the relatives of the deceased. The matter was then transferred to the CBI.

Samples sent to laboratories were fudged

The samples which were sent to CDFD Hyderabad and CFSL Kolkata were found to be fudged. Another set of samples which were sent to the two laboratories on June 3, 2000 were again fudged. After the CBI took over the matter, experts from the two laboratories themselves visited Anantnag district. The dead bodies were exhumed and the experts themselves took samples from the dead bodies and blood samples from the relatives of deceased persons.

On the basis of these samples, the laboratories – after conducting tests independently – concluded that the dead bodies were of the five local villagers abducted and not of some foreign terrorists.

The Army unit, the petitioners contended, had tried to portray the incident as a joint operation of the unit with the Special Task Force of the J&K police. However, both then SSP Anantnag Farooq Khan and then ASI Bashir Ahmed had denied this totally.

The deceased suffered not only multiple bullet injuries but also up to 98% burns. But the alleged ‘hideout place’ of the deceased was hardly burnt. Even the arms allegedly recovered from their possession were hardly burnt. This, as the CBI notes, is not at all possible in a genuine encounter, the petitioners have pointed out.

After the CBI filed the charge-sheet, the indicted army officials moved the apex court which after a considerable delay noted in its May 2012 order that “the competent authority in the Army shall take a decision within a period of eight weeks from today as to whether the trial would be by the criminal court or by a court martial and communicate the same to the chief judicial magistrate concerned immediately thereafter.”

However, after exercising the option of trial by court martial, the army held a court of inquiry and dismissed all proceedings as a case of no evidence. The families of the dead men were refused copies of the proceedings and do not possess the order by which the proceedings were closed at the initial stage. They became aware of the fact only after the army informed the court of the magistrate of the fact. Thereafter, the families moved the court of the magistrate for a copy of the order, which was declined.

By a writ petition under Article 226 of the Constitution, the petitioners have sought quashing of the army’s decision and sought a direction that the guilty army officials be tried by the normal criminal procedure of the land.

An open and shut case

Besides, there were important questions of law, including the competence of the army to resort to an alternate investigative mechanism in spite of a detailed CBI charge-sheet, the petitioners said. This is a case where there was no dispute about the factum of killing, the identity of the killers or the identity of the victims. Police officials have given statements to the effect that these were no militants who died. It is only a writ court that can decide these questions, they said.

The decision of the army not to hold a court martial is subject only to judicial review, they said, adding that thus the high court erred in dismissing the writ petition as not maintainable. “None of the legal challenges were even considered by the high court,” the petitioners have contended.

They lamented that such an important matter was dismissed without even a reply from the state and charged that the army had “virtually blanked out the CBI investigation”.

The petition states that “the Pathribal encounter was declared fake by the CBI after a thorough and detailed investigation. Re-investigation of the same is not permissible but this is in effect what the army has done through the highly inadequate summary of evidence proceedings.” In fact, the petitioners said what the army has done is to afford impunity to the most fundamental of all violations, which is the right to life, and urged the apex court to correct this injustice.