The Illicit Payoffs of a Bomb-Blast

Suicide bombings in Pakistan are now an occasion to outsource blame and not look inward to fix what's wrong. 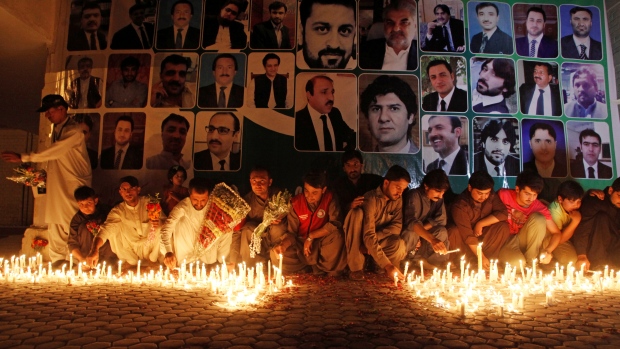 Residents light candles for lawyers killed during the Monday blast at Civil Hospital during a candle-light vigil in Quetta. Credit:Naseer Ahmed/Reuters/Files

Lahore: In March 2014, while I was teaching development studies in an upper income school in Islamabad, I heard unrest outside the classroom. Brushing it aside as usual high school commotion, I continued to teach. When I walked out, I saw a couple of students in conversation in high-pitched tones. I asked them what was going on. “Bomb blast!” they shared rather excitedly. I thought they were joking. The past two decades in Pakistan have been particularly violent, with suicide bombings, terrorist attacks and target killings almost becoming the norm. They have become so common that at times, people don’t pay heed to them. Students crack jokes, hoping for a holiday. Teachers often join them, praying for a day off from their busy schedules. On the surface, this seems to speak volumes about the insensitivity and indifference towards the victims. However, for a generation that is received by snipers at the school entrance and soft boards full of tips of how to escape a bomb blast with regular drills, using humor has perhaps, become a matter of survival. How else is one supposed to carry on? How is one to come to school everyday aware of the real threats posed to each and every educational institution across the country? Especially after the gruesome and horrific attack on the Army Public School in Peshawar in 2014.

On that March morning, the children, the teachers and the administration were locked in. We could hear loud blasts and firing outside the school premises. The district court right across the school building had been attacked. The teachers were instructed to keep the students inside. Body parts of suicide bombers were scattered outside. Blood stains marked the roads. It was estimated that 11 people were killed and another 29 were wounded. A Tehrik-i-Taliban (TTP) splinter group, which later merged into the notorious Jamaat-ul-Ahrar, claimed responsibility. The representative asserted that the legal setup in Pakistan was un-Islamic and until Sharia law was imposed in the country, they would continue to target the judicial system. The same group orchestrated and carried out the bloody suicide attack on Wagah Border in November 2014 and is believed to be behind the recent attack at Charing Cross in Lahore, which killed at least 15 people and injured another 100 in February 2017. Jamaat-ul-Ahrar also claimed responsibility for the multiple suicide bombings on a sessions court in Charsadda, KP which killed at least 7 people and wounded 21. They have called the attack a part of their ‘Ghazi operation’.

That week, I found it necessary to spend part of the class debriefing the students. Their nonchalant attitude disturbed me. I asked them how they were holding up and if they were afraid of what they had witnessed. One girl in the eighth grade said, “Teacher, finally something has happened in Islamabad that we can boast about!” Perturbed by her enthusiasm I asked her to elaborate. Another student jumped in, “Nothing ever happens in Islamabad…we always hear about blasts in other cities. Now we have a story to tell too.” It was like an adventure, an escapade to brag about for the days to come. If this wasn’t troubling enough, soon other students interjected telling me who had been responsible for the attack. “The Indians did it, teacher.”

“Really?” I asked, “There’s no evidence of that. What makes you jump to that conclusion?” “My father told me.” one student said. Another claimed that it was on the news the night before. Apparently the suicide bombers had tattoos on their bodies. Since tattoos are considered haram or forbidden, it was impossible that Muslims could have carried out the attack. I immediately became conscious of my own tattoo, pulling my shirt down to ensure they wouldn’t catch a glimpse of it. If a tattoo was enough to declare someone non-Muslim, an act that could result in death for a born Muslim in Pakistan, I certainly didn’t want to be identified with one. The teachers in the staff room seemed to mirror the children’s opinions. “Of course the Indians are behind it. A Muslim could never partake in such violence. Only the army can help us now, this government is incapable.” I interrupted and reminded them that a ‘Muslim’ group had already accepted responsibility. “Oh they aren’t Muslims, they are Hindu agents,” one of the teachers waved the thought away dismissively.

As violence has ripped through Pakistan this past week, the reactions are an eerie reminder of every attack prior to this. As the principal announced the threat of a bomb blast in the assembly this Thursday, absolutely nothing stirred in the audience full of students and teachers. A few students decided to take Friday off, emailing me that they would be unable to submit their assignments because of the looming threat. The teachers meanwhile spoke of Indian funded unrest in the country. “Their biggest aim is to destabilise Pakistan, and look how effective they have been.”

Others discussed how it was only because of the previous chief of army staff, General Raheel Shareef that Pakistan had experienced relative peace over the past few years. They saw the recent attacks as a sudden return of violence. “We need him back,” they said forgetting that it was under his tenure that the Peshawar attack on the army school took place in December 2014 – an attack that shook the nation to its core. It was also during his tenure that a suicide bomber blew himself up inside the shrine of Shah Noorani in Balochistan, that at least 70 Christians were killed as they peacefully celebrated Easter Sunday in a park in Lahore in 2016, that dozens of Ismailis were shot dead while traveling on a bus in Karachi, that people in churches, shrines and universities were massacred and death marred the streets and corners of several Pakistani cities and villages. The recent spree of attacks is heart wrenching, especially because they are not new. I would run out of space if I were to document each attack that has taken place over the last few years.

After each blast the state promises to take strong action. Sometimes innocent Afghan refugees bear the brunt of their retribution. Other times, petty criminals and mentally ill prisoners are hung in the name of curbing terrorism. The public forgets, jokes are cracked, holidays are enjoyed and normalcy returns – albeit one interspersed with more snipers and more checkpoints, at least temporarily. Then the heightened police presence is slowly reduced. A suicide bomber attacks once more. Blame is outsourced to India or Afghanistan; weak governance structures and security measures are overlooked, as are attacks in what are considered “far flung” areas of Fata, KP and Balochistan. They are ignored until an attack reaches our doorstep in the “prominent” and “significant” cities of Lahore, Karachi and Islamabad. The public gets serious, demanding change; the government responds by cracking down on more Afghanis and pointing fingers at ‘enemy states’, sometimes adopting their strategies as we see in the case of the recent surfacing rumours of surgical strikes in Afghanistan. The public is satisfied and the cycle resumes, with no end in sight.

Anam Zakaria is the author of Footprints of Partition: Narratives of four generations of Pakistanis and Indians.