The pictures of two youths run over by a paramilitary vehicle outside the mosque have gone viral on the social media, triggering the protests. 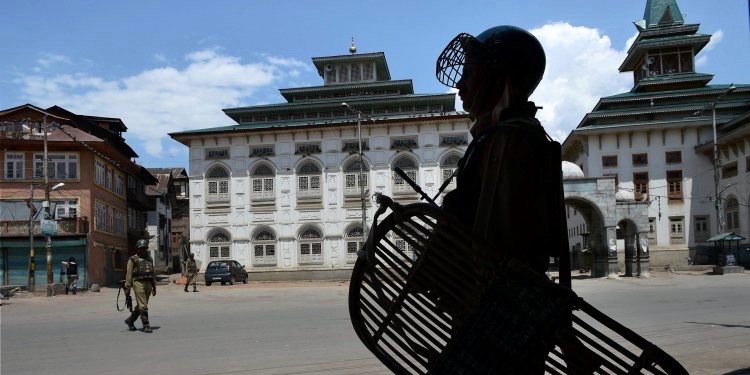 Srinagar: The death of a youth from summer capital Srinagar, who was run over by a CRPF vehicle outside Jamia mosque, has triggered a fresh wave of outrage and protests across Kashmir.

Kaiser Bhat, 21, succumbed to injuries at the city’s SKIMS hospital after he was knocked down by the speedy vehicle which had come under attack of stone throwers following Friday prayers on June 1.

On May 25 (Friday) more than 50 worshippers were injured when the security forces fired pellets on protestors inside the central mosque. The mosque had to be closed for prayers to clean the blood-stained floor. 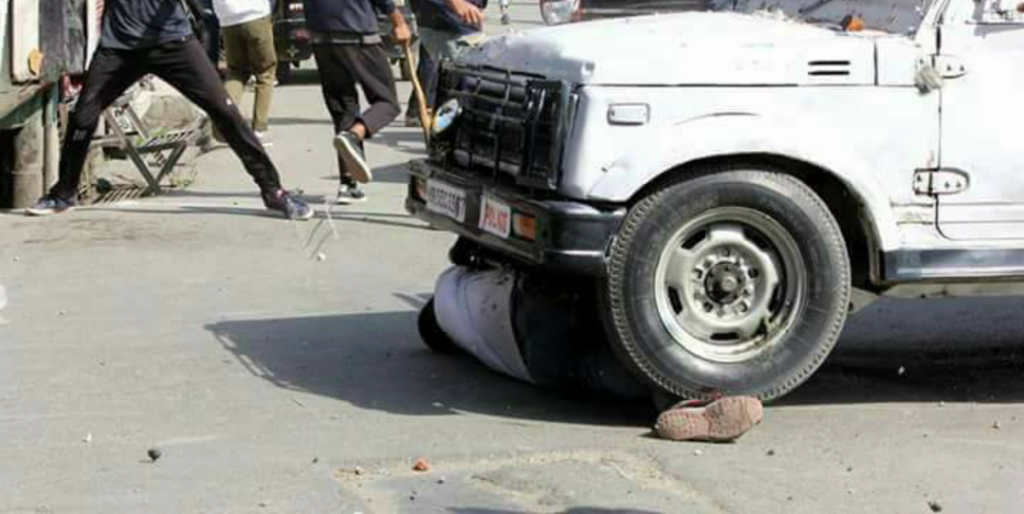 Kaiser Bhat, 21, was run over by a CRPF vehicle. Credit: Special Arrangment

The incident triggered massive outrage following which the J&K police agreed to a “peace plan” with the management of the mosque to not deploy forces in its vicinity during Friday prayers, the first time in many years.

On Staurday, the situation was calm after Friday prayers till the CRPF vehicle suddenly zipped through the area. An  enraged youth who was among the protestors, hurled stone at the vehicle, said an eyewitness who identified himself as Muzaffar.

As the vehicle tried to escape, it knocked down two youths, leaving them critically injured. One of the injured was Bhat. Around midnight, he succumbed to multiple injuries to his internal organs, a doctor at the hospital said, adding that the condition of the second injured youth, 23-year old Muhammad Younis, was stable.

The pictures of the two youths being run over  by the paramilitary vehicle outside the mosque have gone viral on the social media, triggering state-wide protests.

This is the second such incident in less than a month when a civilian was rammed by the forces’ vehicle. On May 5, a youth, Adil Ahmad Yadoo, of Gasi Mohalla Safa Kadal was mowed down by a J&K police vehicle in Noorbagh Chowk, near an encounter site.

Hailing from Fateh Kadal area of Srinagar, Bhat and his two sisters, aged 16 and 18, were living with their uncle at Dalgate after death of his both parents some years ago. His mother died of renal failure, while his father who was a shawl vendor, passed away after a massive cardiac arrest, one of Bhats neighbours said.

“He (the slain youth) was helping his uncle in his business of shawls. He was concerned about future of his sisters and had nurtured a  lot of dreams for them,” said one of his friends.

Outrage in the Valley

The tragic incident comes in the midst of Ramzan ceasefire that was announced by the Centre last month. The opposition National Conference working President Omar Abdullah hit out at chief minister Mehbooba Mufti over the incident.

“Earlier they tied people to the fronts of jeeps & paraded them around villages to deter protesters. Now they just drive their jeeps right over protesters. Is this your new SOP @MehboobaMufti sahiba? Ceasefire means no guns, so use jeeps?” he tweeted along with a picture of youth crushed under CRPF vehicle?”

Earlier they tied people to the fronts of jeeps & paraded them around villages to deter protestors now they just drive their jeeps right over protestors. Is this your new SOP @MehboobaMufti sahiba? Ceasefire means no guns so use jeeps? https://t.co/42W6vGAPVi

In a statement, the Joint Resistance Leaders(JRL)  comprising Syed Ali Shah Geelani, Mirwaiz Umar Farooq and Muhammad Yasin Malik said the “killing spree continues in Kashmir despite Ramadhan ceasefire. These killing continue either by bullets, pellets or lately by crushing them under their vehicles,” the trio said.

Tempers ran high on Sunday afternoon after police and paramilitary CRPF which were deployed in strength in Fateh Kadal used force to disperse mourners, leaving more than a dozen injured.

“Assaulting mourners during funeral and burial of Kaiser with teargas shells and pellets causing grave injuries to scores of them reflects the anti-people and inhuman approach of the authorities,” the JRL said.

In an official statement, the J&K police said it had initiated proceedings after registering an FIR in the incident under relevant sections of law. “Investigation in the instant matter is going on,” the statement said. 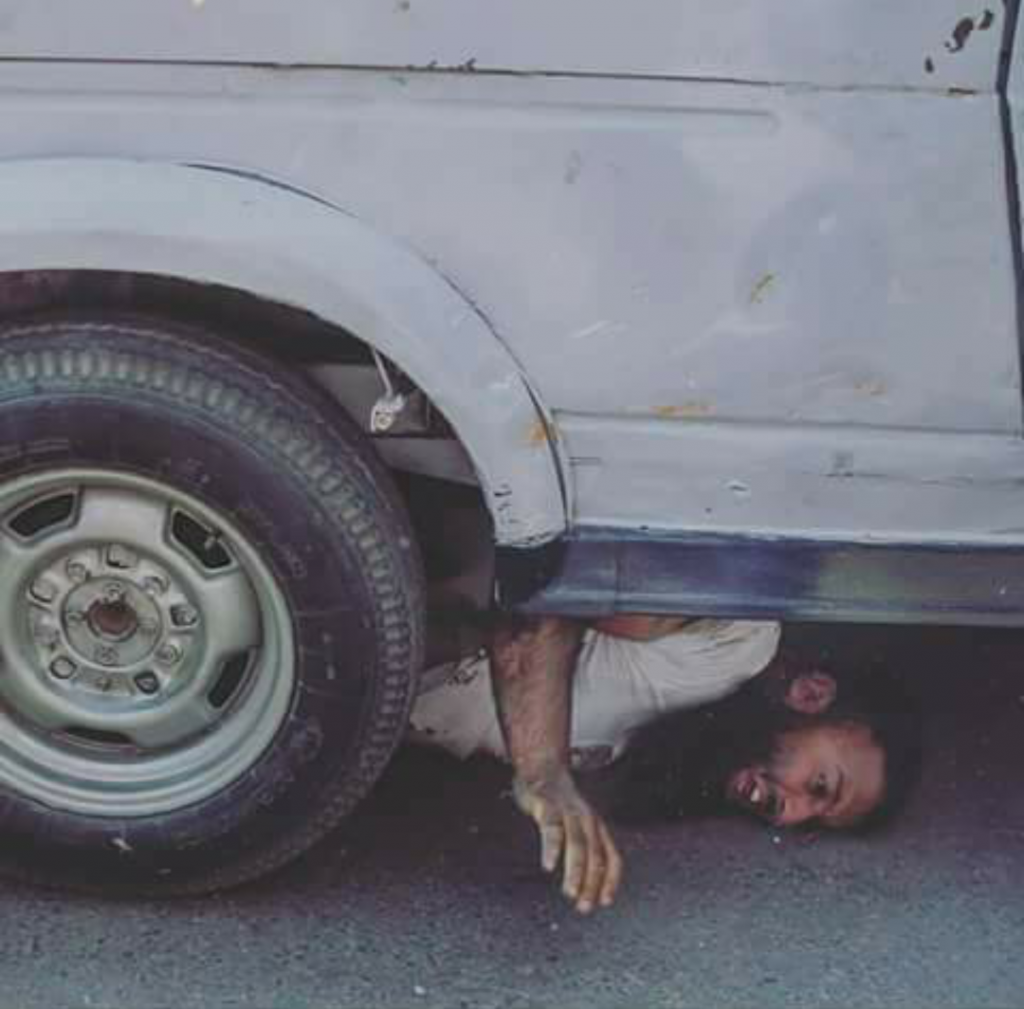 Muhammad Younis, 23, who was run over by a CRPF vehicle, is admitted in a Srinagar hospital and is stable, according to doctors. Credit: Special Arrangement

A local news agency quoted a police spokesperson saying that two FIRs had been registered in the case. “One of the cases is (against protestors) for rioting and the other one is against the driver for rash driving,” said a police official.

Later in the day, as the pictures of the youth rammed by the force’s vehicle went viral, triggering sharp criticism against the forces, the J&K police came up in defence of the CRPF , saying that the pictures were being used “selectively”.

“There is also a difference in presenting before the audience/readers/followers ‘a selective picture’ and not a ‘chain of pictures presenting the whole scene’. We appreciate your understanding of our mechanism; however, we fail to understand why one forgets his/her own SOPs. Thanks,”  the J&K police tweeted from its official handle in response to a tweet by a journalist who had questioned handling of situation by the forces.

There is also a difference in presenting before the audience/readers/followers 'a selective picture' and not a 'chain of pictures presenting the whole scene'.We appreciate your understanding of our mechanism,however,fail to understand why one forgets his/her own SOPs.Thanks

CRPF spokesman Sanjay Sharma told media that a group of over 500 protestors surrounded the CRPF vehicle that was ferrying a senior officer. “The mob tried to open the back door of the vehicle that was closed from inside and lynch the CRPF men,” he said. “We showed exemplary restraint by not opening fire but when the mob pelted us with stones, our driver sped through the crowd and they (two youth) were hit.”

But Hurriyat leaders slammed the forces over the incident. “The worst part is that after mowing down the youth a case for rash driving was registered as if the incident happened by accident,” the JRL statement said, referring to the May 5 incident wherein the driver was granted bail last week after police had registered case of rash driving in the incident.