Darshan Singh Dhaliwal was sent back to the US after immigration officials asked him repeatedly why he had set up a langar and who was funding it. 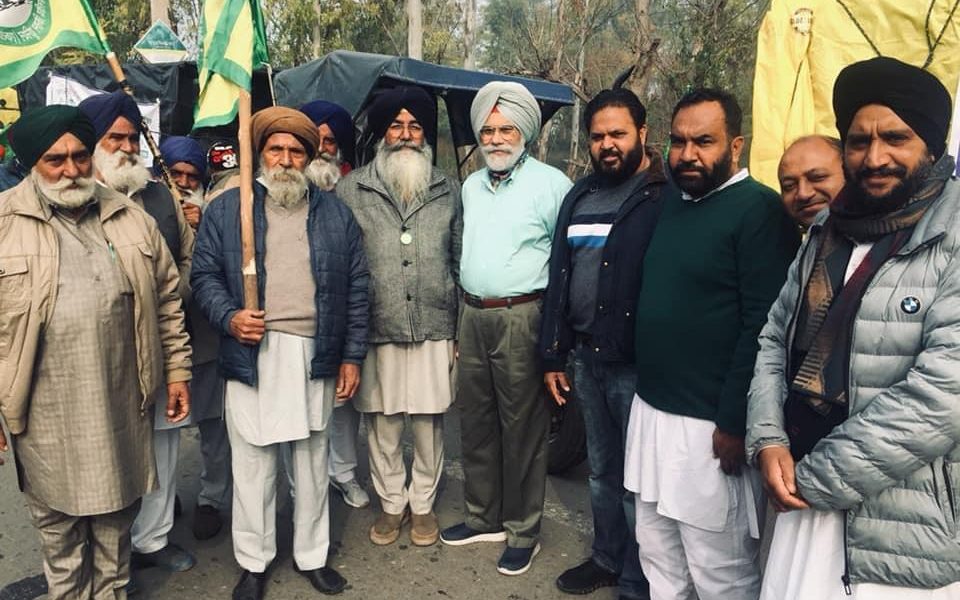 Jalandhar: Days after he was deported from Delhi airport, US-based billionaire Darshan Singh Dhaliwal  said that he had been specifically targeted by immigration officials ever since he began funding a langar at the farmers’ protest site in Singhu, on January 6, 2021.

Every time he landed India this year, said Dhaliwal, immigration officials at the airport would repeatedly question him on why he organised the langar and who paid for it before letting him through.

But last week, Dhaliwal – who is a US national and Person of Indian Origin (PIO) – found his passage to India barred.

Dhaliwal, who lives in Milwaukee, Wisconsin , arrived in India on a Chicago-Delhi direct flight at 6.30 pm on October 23-24 to attend his niece’s wedding. But he was denied permission to enter by the immigration authorities who allegedly cited the same Singhu border langar for farmers as the reason. Dhaliwal told The Wire by telephone on Friday that he was told to stop organising such langars if he wanted to enter India again.

Dhaliwal along with his wife Debra, who is from the Netherlands, waited at the airport for around five hours only to be sent back to the US on the same flight. Darshan Singh Dhaliwal serving farmers at Singhu border during one of his recent visits to India. Photo: By arrangement

Dhaliwal said, “When I went to the immigration counter, the officials told me to wait. I waited for more than an hour at the airport. I asked them again what was going on but they made me wait more. After two hours, they told me that I will have to go back to the US. When I asked why I was being denied permission to enter India, the immigration officials asked the same questions that they had been asking earlier too – why I organised the langar at Singhu border and who is paying for it. They said if I wanted to enter India, I should stop funding this langar.”

Dhaliwal said that when he asked again, the immigration officials said, “Upparo order hai’ (We have received orders from the top).”

The immigration officials told him that the “orders were on the computer” and that he could not enter India. “During this time, I spoke to my brother Surjit Singh Rakhra, who had come to receive me at the airport, the Indian consul general, the Indian ambassador in Washington, the chief secretary of Punjab and many top officials in the state and Union government but nothing could be done. They were all shocked to hear the kind of treatment meted out to me. At around 1.30 am on October 24, my wife and I went back to the US on the same plane,” he added.

The PIO businessman said that ever since he started organising the supply of food for the protesting farmers at Singhu border, he had come to India three times – in January, in April and now in October. “Whenever I came to India, the immigration officials would ask me why I was supporting the  farmers’ protest and who was funding the langar. I took these queries lightly and never shared anything with my family, considering it to be routine questioning by airport staff,” Dhaliwal said.

Dhaliwal added that he remains a steadfast supporter of the protest. “I want to tell everybody that had I been in India now, I would have definitely visited the Singhu border again. I have spent crores on the langar entirely on my own. It is purely my own contribution to the langar sewa and I am glad I am doing it,” he said.

On the fact that he was being targeted over his involvement in the farmers’ protest, Dhaliwal said that he considered himself a far better nationalist than anybody else.

“If this can happen to me, it could happen to anybody. I am proud of my Indian roots but whosoever has done this, it is really bad. I am a 71-year-old man and I had to undertake a 40-hour back-to-back flight to the US, which was tiring. But let me admit that this will not dampen my spirit and the langar will continue at the Singhu border. I am concerned about feeding people and I will continue to do so,” he added.

Dhaliwal has been funding the langar at the Singhu border in the memory of his father, under the Subedar Kartar Singh Dhaliwal Charitable Trust since January 6.

As the news spread, people in Punjab and the Punjabi diaspora abroad condemned the Union government’s attitude in denying entry to a PIO, who is a name to reckon with in the US and back home in Punjab. 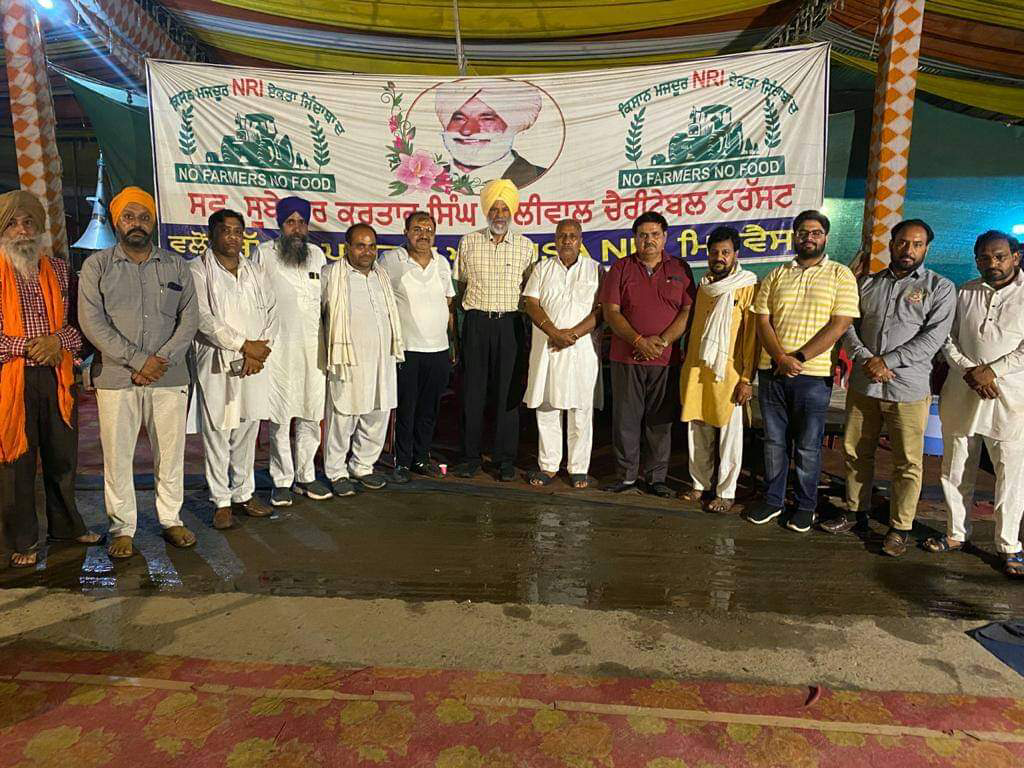 Surjit Singh Rakhra (in yellow turban) with farmers at their langar stall at Singhu border. Photo: By arrangement

The incident invited sharp criticism not just from Dhaliwal’s younger brother and SAD leader Surjit Singh Rakhra, who was a minister in the previous SAD-BJP government but also from former Punjab chief minister Parkash Singh Badal, who also wrote a letter to Prime Minister Narendra Modi in protest.

Rakhra, who represented the Samana assembly segment in Patiala district, told The Wire that not only has Dhaliwal been funding the langar for over 10 months now, but he has also provided 22 waterproof tents for farmers at Singhu border.

“I had gone to the Delhi airport to receive my brother but the way we were harassed was sheer injustice. My brother was repeatedly asked why he was supporting the farmers’ protest against the three farm laws. My niece is getting married on October 31 and Darshan’s arrival was eagerly awaited, as he is the eldest among us all. It is disheartening,” he said.

In his letter to Modi, Parkash Singh Badal wrote:

“Darshan Singh Dhaliwal is a prominent, successful and highly respected Punjabi settled abroad and he was coming to India with his wife to attend the wedding of his niece. But on landing in Delhi, he was first made to wait and harassed for five hours and eventually denied entry to his own homeland, the authorities verbally cited his continuously arranging and sponsoring langar for the farmers at the Delhi borders as the sole reason. He was categorically told to stop sponsoring langar for the farmers’ cause if he wanted to enter his homeland.”

The former CM also requested Modi to intervene personally in the matter so that the injustice done to Dhaliwal is undone.

Dhaliwal, who moved to the US in 1972, owns over 100 petrol and gas stations in the US, across states like Wisconsin, Kansas, Illinois, Indiana, Michigan and Missouri.

Dhaliwal has also set up langars and funded relief work in the aftermath of the 2004 tsunami in Tamil Nadu, given scholarships to over 1,000 students who wish to pursue higher studies in India and abroad, helped over 2,000 Indians in setting up businesses in the US, donated US $1 billion to build a soccer ground in Milwaukee, in addition to providing funds for educational institutions in Punjab.

“Today, the government’s attitude might have changed but I hosted a lunch in honour of former Prime Minister Atal Bihari Vajpayee when he came to the US. Out of the total of 33 Congressmen present during the lunch, 11 were led by me alone,” he pointed out.

Back in the 1990s, when former Punjab chief minister Beant Singh sought his help to save flood-affected Punjab, Dhaliwal donated Rs 10 lakh, which was considered a big amount at that time.

Earlier, when Badal sought assistance to save the educational institution Dashmesh Academy at Anandpur Sahib from closure, Dhaliwal provided Rs 40 lakh. “I feel delighted to have got a chance to serve my motherland and I will continue to do so,” he added.

Note: In an earlier version of this story, Dhaliwal was identified as a non-resident Indian, or NRI, the term used to describe Indian citizens resident abroad. He is, in fact, a US national and a person of Indian origin, or PIO.