'Our Lives Are Shaped by Violence': Kashmiri Artist Detained for 'We Are Palestine' Mural

"I don’t think Kashmir is safe for artists to express themselves," Mudasir Gull says. 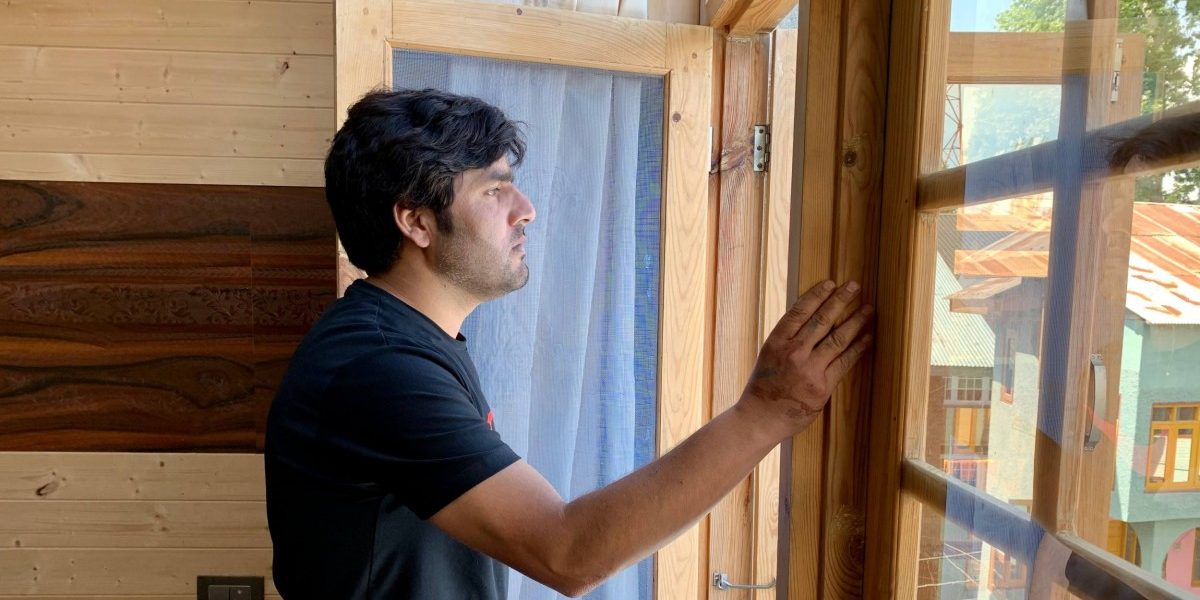 Srinagar: Mudasir Gull, an artist based in Jammu and Kashmir’s Srinagar, shot to instant fame last week after the visuals of a mural he had painted in support of Palestine went viral on social media.

For 27-year-old Gull, though, the jubilation didn’t last long. In Kashmir’s environment of shrinking freedom of speech,  he became a fugitive in the eyes of the government and security forces.

On Friday, he was detained by the J&K Police and kept in illegal confinement for three days before being set free without any charges being filed. He spoke to The Wire about his ordeal, Kashmir’s Palestine connection and the difficulties of being an artist.

Edited excerpts from the interview:

What was the idea behind the pro-Palestine mural which appeared in Srinagar and instantly became a hit on social media? Sadly, it also landed you in jail.

It was Thursday. After finishing our Eid prayers, my friends told me a pro-Palestine protest had been planned in Padshahi Bagh locality the next day. They wanted me to join too. Since people know me as an artist, young boys came to my home and requested to draw something about Palestine on the gates of the bridge.

What do you know about Palestine? When was the first time you heard about it?

The history of Palestine and Al-Aqsa mosque is intertwined with the history of Islam. Every child in Kashmir knows about Palestine. Like the children of Gaza, we too have grown up in a conflict zone. Our lives are shaped by violence over which we have no control.

I was first exposed to the actual scale of brutalities committed by Israel against Palestinians during the 2014 Gaza war. I saw on TV harmless children being massacred, almost on a daily basis. It pained me a lot. I couldn’t tolerate what was happening and cried many times. Israel is bombarding Gaza again. Kashmir also feels the pain.

Were you aware of the consequences that you could have faced for participating in a protest at a time when the space for critical thought in Kashmir has been criminalised?

I was conscious not to cross the line. I know many people and even journalists who have been booked under draconian laws. It was playing on my mind when I assumed that “We are Palestine” would be an apolitical message. But I was wrong. I didn’t realise that a harmless message could spur such a big controversy. 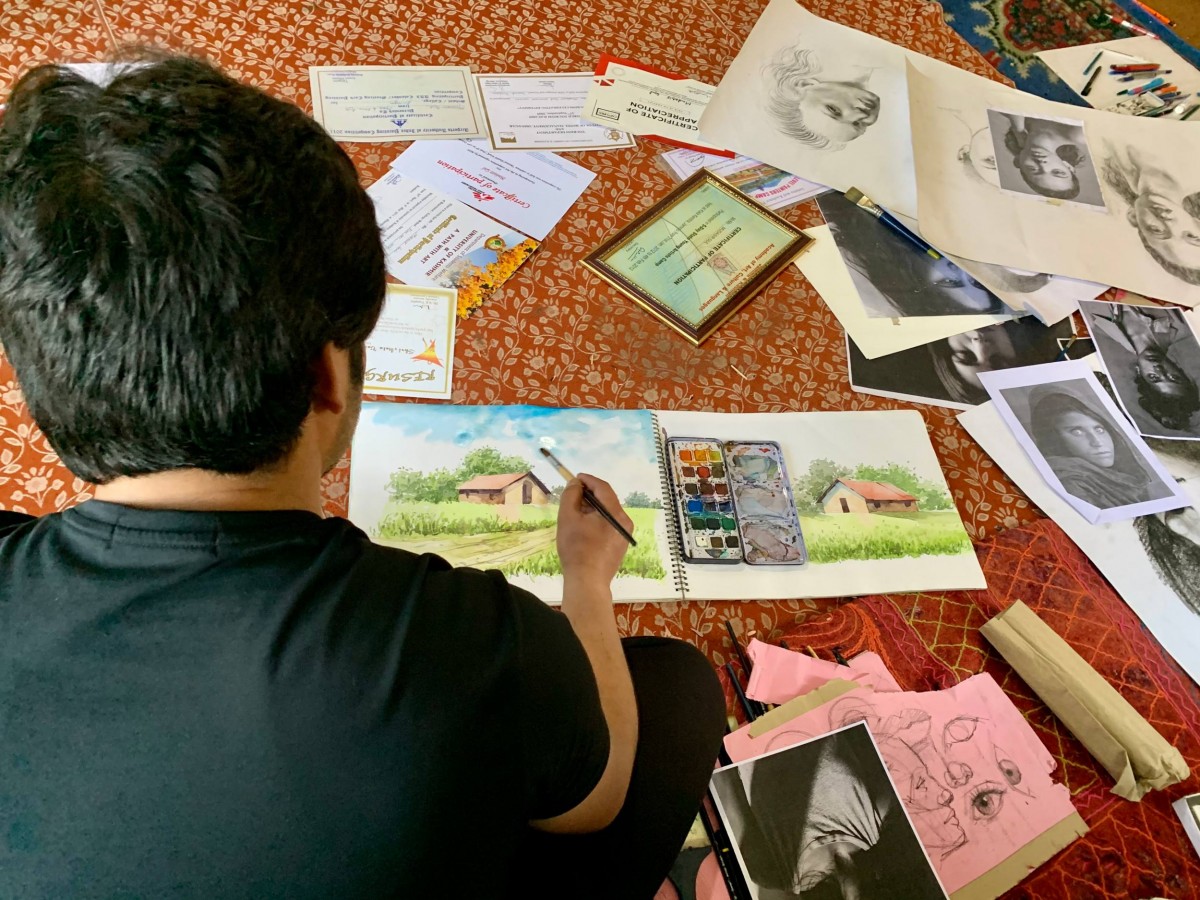 How were you picked by police? Did they deface the mural or did you do it?

It was around 3:30 pm. The protest was underway when the police came. At first, we thought it may be related to the (COVID-19) lockdown violations. Some children, barely 10 or 12 years olds, pelted stones at policemen. I tried to stop them but they didn’t listen. Then I ran away.

Within 15 minutes, my phone rang. The caller was a police officer. He asked me to come over to the bridge. The ground shook beneath my feet. I asked him what my fault was. But he feigned ignorance and disconnected the call.

Then, after a couple of minutes, he called again and asked me to turn up at the bridge soon.

I was very scared. I asked him, ‘What have I done, sir?’ but he didn’t share details. I confessed to him that I had made the graffiti. He rebuked me, saying that I was telling the wrong person. He asked me to get my brush and paint to remove the mural.

When I arrived at the bridge, they asked me to paint over the mural with black. They promised to set me free there and then but when I finished, they ordered me get to get into their vehicle.

I thought they will keep their word. It was my first experience with the police. But I was wrong.

I started getting bad thoughts. I thought the BJP is in power and they will book me under the PSA [Public Safety Act]. I thought if I run away, they will raid our home at night. My father is a heart patient. I have mother and a sister. I didn’t want trouble for them. I got into the car without resistance.

Once we arrived at the police station, a senior officer showed me a video of the protest and asked me to identify the protesters. [They seemed] to know [some] names but the officer asked me identify around 20 who were children and I didn’t know who they were.

Did they treat you well afterwards?

I was questioned for four hours. The officer then told the others to take me into a room. I was relieved. They were not putting me in a cell after all. They served me chicken with rice. I thought they were doing it as a mark of respect for my work. In hindsight, I think they treated me well only because they wanted to extract information from me.

I was trying to sleep when a policeman came into the room. It was well past midnight. A police officer told me they were getting calls from Delhi. They were angry. They told me my ‘mistake’ was splashed on the internet all around the world. A video of the protest had gone viral too. It had pissed them off.

They were going to raid the houses of other youngsters and they wanted me to locate them. The raids continued for around two hours during which they detained seven other youngsters. I had never imagined something like this was going to happen. 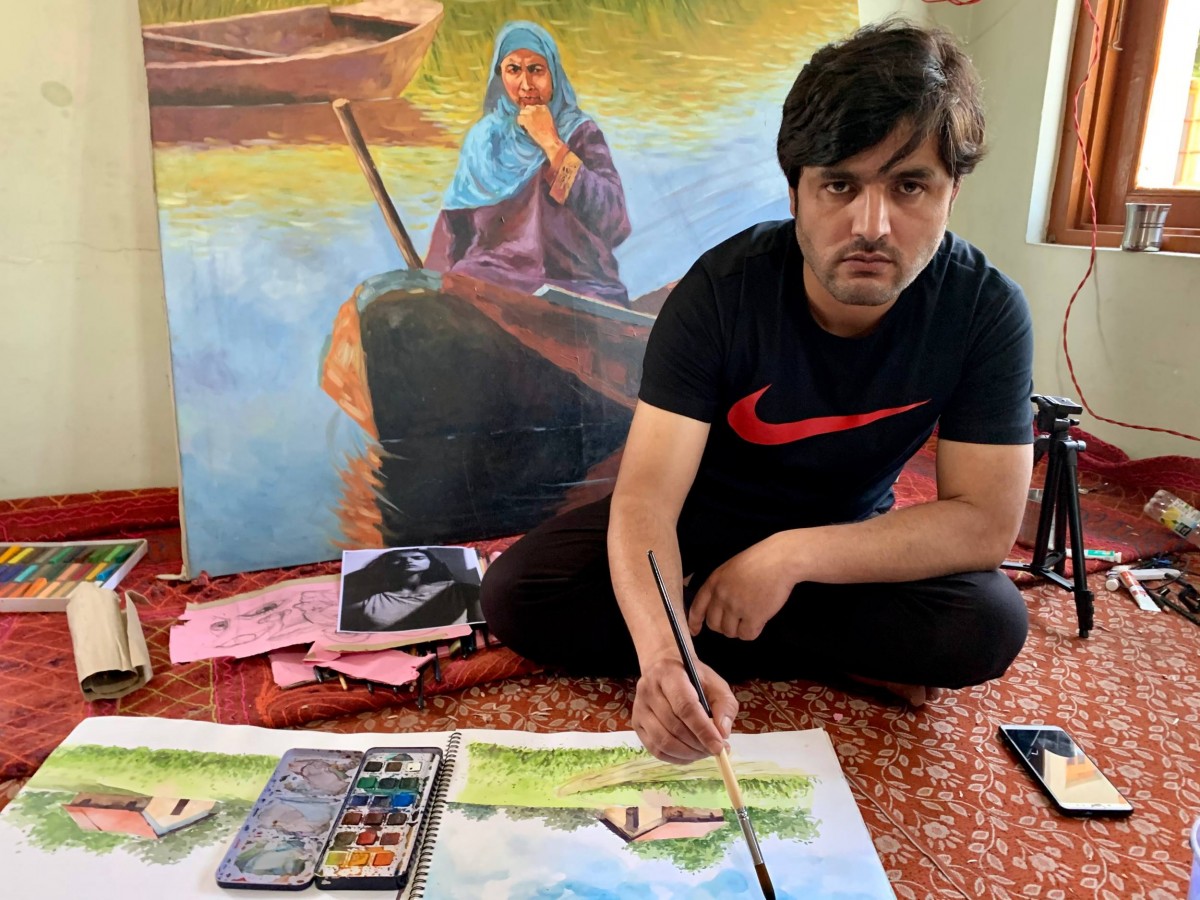 What were your thoughts at that time?

I thought they were going to charge me under the PSA and take me to some prison outside Kashmir. Once we were back at the police station, all of us were lodged in a room which smelled of urine and human faeces. It had no ventilation. There was a stench of death. I thought we were in a grave.

In the morning, a policeman came and spoke to us, as if I was responsible for the plight of others as well.

I am not a militant. I didn’t kill any policemen or army soldier. I didn’t throw stones. As an artist, I was only giving an outlet to my feelings. I didn’t know that thinking and expressing yourself in a non-violent way was also a crime in Kashmir.

When did you realise that you were going to walk out of the jail?

On Sunday morning, policemen started coming to our cell to tell us that we are going to be released soon. I thought they are saying this so that we don’t stress ourselves much. Then the buzz became bigger. In the lockup, we were tutored to apologise and say we regret what we had done if confronted by senior officers.

What inspired you to take up art? How long have you been drawing?

I was inspired by perhaps the most famous portrait of Sir Mohammad Iqbal with a falcon in the background. I drew it more than a hundred times when I was in class 4. But I had to give up my artistic pursuits when I was in school due to an anxiety disorder. I recovered later and enrolled at Srinagar’s College of Fine Art.

I am mostly a commercial artist who does realistic art like painting walls of schools, making murals, etc. The mural on Palestine was my first political work and it has landed me in jail (laughs). But I am humbled by all the support.

Before you were set free, the J&K police, which didn’t press any charges, said you were counselled. What was that all about?

A senior police officer got us into the compound of the police station and we were asked to line up. Our relatives who had come to receive us were standing opposite us. The officer asked why we were carrying this ‘burden’ on our shoulders. He said there are other areas of Srinagar where no protests are reported. But we were already tutored to keep silent. I was afraid the officer might beat me up when he asked me why I had drawn that mural. But I kept calm and didn’t respond. He said I was ruining my career.

An elder from our neighbourhood intervened and told the officer that I was an artist and that I had already apologised. But he didn’t take his words seriously. The officer said that I had not made a mistake but there’s something ingrained in us.

Then we were asked to sign on some document. I don’t know what it was. They collected money for the food we had eaten during our detention and let us out.

What are you working on presently? Have you drawn anything after you were freed?

I am doing this piece of artwork which reflects the fear, uncertainty and trauma that I went through in those three days. I am trying to give a shape to my bad thoughts. It’s an abstract piece that reflects the emotions I will carry with me for the rest of my life.

Do you intend to do more political art?

It is a difficult question. I don’t think Kashmir is safe for artists to express themselves. When the freedom of expression gets criminalised, there are two options – to keep silent and suffer in solitude or speak out and be prepared to pay the price. I don’t yet know which path I am going to adopt.