Two students have said they were brutally manhandled, stripped and kicked in their private parts during a protest near Amit Shah's house a few days ago. 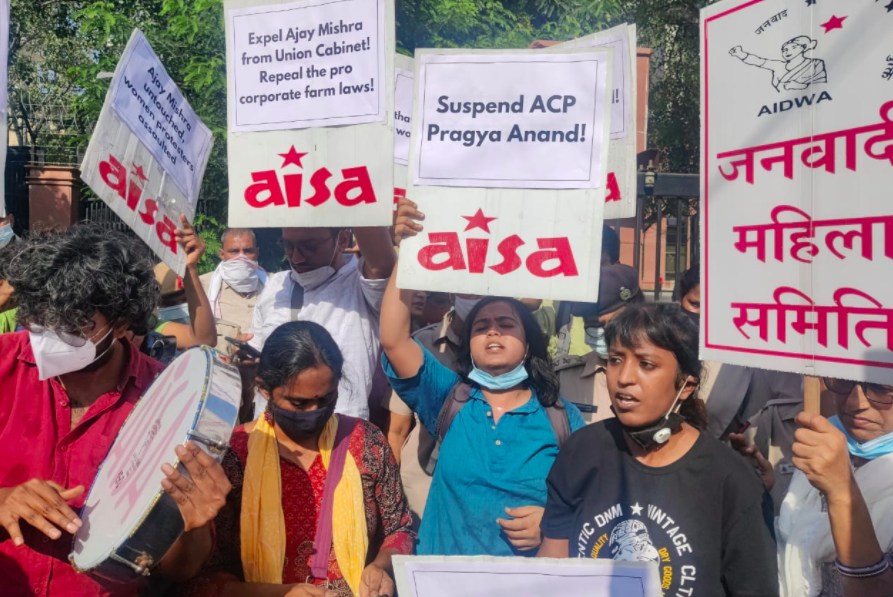 New Delhi: “I was thrashed, assaulted and detained, but we are here today to state that women will not give in to any attempts to drive them into submission.”

These words are from a 20-year-old student and member of the All India Students Association (AISA), who was one of two students who have said they were assaulted by Delhi Police while protesting in front of Union home minister Amit Shah’s residence in New Delhi on October 10.

The students were protesting against the death of farmers in Lakhimpur Kheri, demanding the arrest of Ashish Mishra, the son Union Ajay Mishra, who was arrested later.

The two students had taken to social media with their testimonies of the alleged torture. The testimonies vividly described that they were stripped, shamed and humiliated during their detention, and that they were also kicked in their private parts.

The 20-year-old tells The Wire that she was kicked in her private parts and humiliated by police officers.

On October 13, students demonstrated outside the Delhi Police headquarters in protest against the conduct of police officers and demanding the resignation of ACP Pragya Anand.

On social media, too, police’s action is being widely condemned and the chorus for punitive action against the police officers is growing.

A delegation comprising Kavita Krishnan, secretary of the All India Progressive Women’s Association (AIPWA), Annie Raja the General Secretary of National Federation of Indian Women, and student protesters met police officers inside the headquarters demanding an official inquiry in the case.

Joint Commissioner of Police Jaspal Singh informed the delegation that a judicial inquiry will take place. The protesters have been insisting on the suspension of ACP Pragya Anand, who allegedly ordered the detentions and the crackdown on the protesters.

The students also informed The Wire that on demanding action against the police officers New Delhi DCP Deepak Yadav told them, “You were attacked by a couple of people, not everyone is bad, only a few people are problematic.”

Lashing out against this reply, students and activists have aimed to reiterate the fact that violence and brutality against female protesters creates an atmosphere restricting their participation in mass movements.

Speaking to The Wire, the second student activist who was on the receiving end of the alleged torture, said, “My chest was pinched, my clothes were lifted and I was kicked in my private parts. When women take to the streets, whether it’s farmers, workers or tribals, the crackdown on us is brutal, our gendered identity is used as a tool to target us and make our bodies sites of violence, our message today is loud and clear – our bodies are not battlegrounds.”

Echoing her, at the protest site, Kavita Krishnan stated, “The women resisting the state will not fear being kicked and thrashed, we are standing united in the face of this harassment, the violence that is being inflicted on women is a product of both patriarchy and the ingrained misogyny in our systems.”

The attack on the students has been condemned widely and the Samyukt Kisaan Morcha has also issued a statement against it, stating, “The manner in which the violence was meted out identically to both women, shows that the women personnel have received training and instructions to treat women protesters in this fashion “to show them their place.”

“SKM supports the demand that the ACP of Chanakyapuri be dismissed and the police personnel who subjected the protesters to the disrobing and assault be suspended and reprimanded,” it read.

The students also pointed towards the larger narrative and global patterns of the crackdown on women dissenters. They said, “Violence on women’s bodies is a tool often used by the state to keep dissenting women “in their place”. We have witnessed how the armed forces have used sexual abuse in Kashmir, in the North East and on women from various marginalised communities. Women have narrated their experience of sexual violence is police custody time and again..”

During anti-CAA protests, female students of Jamia Millia Islamia had also complained of having been targeted with similar violence, where their private parts were kicked and clothes torn. More recently, labour rights activist Nodeep Kaur was also beaten up and humiliated in custody amid the ongoing farmer’s stir.