Villagers Suffer Rapes, Beatings and Killings in Fight Between State and Maoists in Chhattisgarh

As huge sums of money are spent on militarisation, question arise on why these funds were not used for the social sector 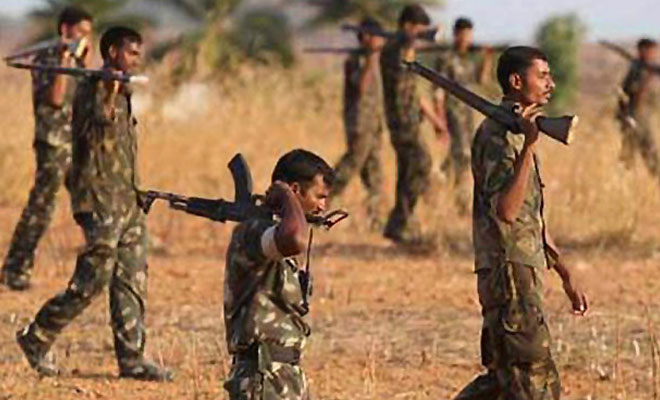 As huge sums of money are spent on militarisation, questions arise on why these funds are not used for the social sector. New Delhi: Even as a bitter conflict is on between the state and Maoists in Chhattisgarh, ordinary villagers continue to be the worst hit. They are not only victims of fake encounters, rapes and arrests (by the police and security forces), beatings (by both police and Maoists), IED blasts and killing of informers (by Maoists), but are also increasingly falling prey to a new form of Salwa Judum. Yes, five years after the Supreme Court imposed a ban on vigilante militias, the old evil has returned to raise its head once again and once again ordinary adivasis caught in the cross-fire between insurgency and counter-insurgency are paying the price.

In the area around Kanger national park in the Tongpal and Darbha blocks of Bastar, villagers are being arrested or made to surrender by the police and then threatened and brutally beaten by the Maoists.

The plight of these ordinary citizens has been highlighted by a fact-finding team comprising Sanjay Parate (Chhattisgarh state secretary of the CPI-M); Vineet Tiwari of the Joshi-Adhikari Institute and a Communist Party of India member; Archana Prasad, a professor at Jawaharlal Nehru University and a member of the All India Democratic Women’s Association; and Nandini Sundar, professor at Delhi University. The team visited Bijapur, Sukma, Bastar and Kanker districts in the Bastar Division from May 12 to 16.

Villagers caught in the crossfire

Pointing out that the level of Maoist presence and scale of state repression varied somewhat across the districts, the team said ordinary villagers were the worst sufferers in Sukma, portions of Bijapur and the Darbha/Tongpal areas of Bastar/Sukma.

It said Salwa Judum is taking the form of the Jan Jagran Abhiyan (ironically its original name) whereby the police have now adopted a carrot and stick policy towards the villagers if they provide information about the Maoists. The police is “both threatening and distributing all kinds of goodies to the villages including cell phones, if they inform on the Maoists”, the group said, adding, “this is very similar to the origins of Salwa Judum”.

The villagers are literally caught between the devil and the deep blue sea. If they work for the police, they are doomed, if not they are still doomed. Both sides have been using these unarmed, innocent citizens to fight their battle. “In Kumakoleng village, 50 persons were forced to ‘surrender’ in March and are now living in different police and CRPF camps. On April 15, the police/CRPF held a Jan Jagran Abhiyan in Kumakoleng. On April 17, Maoists beat up villagers, including women, for asking for a CRPF camp to come up near their village. Two-thirds of the entire village has now fled and is living outside the village for fear of the Maoists,” the delegation said, indicating the scale of the problem.

Left with no option but to defend themselves, the villagers are now taking to whatever arms they can lay their hands on to secure their areas. “In neighbouring Soutnar panchayat, the villagers have resolved to keep the Maoists out and have been patrolling the villages with bows, arrows and axes for the last three months. In the past, the Maoists have beaten and killed people in the village, on charges of being informers.”

What is worrisome is that the police are also not keen on protecting the villagers. They just want to use them as informers or even bait. “The villagers say the police have refused to set up camp, telling them that the Maoists will go away if they patrol, thus making them vulnerable in the first place and then leaving them to their own devices. We are extremely concerned that such developments will lead to large-scale divisions and displacement as happened during Salwa Judum and urge all parties to work in the best interests of the Adivasi population,” the delegation said, referring to the situation in Soutnar panchayat. The fact that the police is not interested in any peaceful and honest approach to the problem, the delegation said, is also indicated by the planted “breaking news” that was circulated stating that “our group asked the villagers to side with the Maoists and threatened them that their villages would be burnt by the Maoists if they did not do so. Nothing could be further from the truth. We feel a proper dialogue process and a genuine people oriented democratic model of development is essential for the well being of the people of Bastar. In the current context neither the state nor the Maoists are addressing this urgent need.”

The fact-finding mission also claimed that there have been two recent cases of alleged fake encounters in the region.

On May 12, villagers from Marjum and CPI leaders Manish Kunjam and Nanda Sori held a press conference in Dantewada, in which they testified that two innocent youth were killed and passed off as Maoists by the police. The CPI is holding a demonstration on May 19 in Dantewada to press for a fair enquiry into the incident and registration of an FIR.

Prior to that in the first week of May, two police constables died in a cross-firing incident near Marjum village in Dantewada district. After a few days, on May 8, the villagers went to a nearby village to celebrate Beeja Pandum, their main seed-sowing festival. Two boys aged around 17-18 years, Markam Manglu and Podiyam Vijja, went to bathe in a nearby stream. The patrolling force found them alone, shot them and announced to the press that they had killed two Maoists. The villagers learnt around noon that there was firing near the river, found the two boys missing and contacted the police, where they learnt about the death of the two boys. “The sarpanch of Marjum, the anganwadi worker, family members and other villagers confirmed that the boys had nothing to do with the Maoists and this was nothing but the murder of two innocent tribal boys by the police/security forces,” the delegation said.

Apart from these two major incidents, the delegation came across several other instances of arrests of ordinary villagers, some allegations of rape by the police and one confirmed instance of rape and sexual exploitation by an SPO/sahayak arakshak working in a Border Security Force camp, resulting in pregnancy. “We also learnt of instances in the past where Maoists had killed people, leading to severe disaffection among people,” it said.

Giving out a list of its “broad observations”, the delegation said the whole district is heavily militarised with CRPF/BSF/ITBP camps every five kms, in some villages even every two kilometres. It said they are being set up in complete violation of the Fifth Schedule of the constitution, the Panchayat Extension to Scheduled Areas (PESA) Act 1996 and the Forest Rights Act 2006. “No gram sabha permission is sought, camps come up at night and people’s cultivation is taken over, without their rights being settled. There is massive destruction to the environment.”

The police camps have had both positive and negative impact. “In some places the camps have created a sense of security, with Maoist presence coming down, but in most places they have severely enhanced the insecurity of the villagers, due to exploitation and repression by the forces.”

They also said the whole emphasis is on building roads with a view to intensifying mining and industrialisation, with no concern for people’s welfare or rights.

The group said the the arrest of villagers who have no understanding of the legal system has many pitfalls as they “are forced to pay high fees to lawyers and their lives are ruined”. The law, the delegation said, is being used as an instrument of torture rather than of justice or peace-keeping. The jails are overflowing.

With the average household income of villagers being just 1,000-2,500 rupees per household per month, there being no implementation of NREGA despite this being a drought year and many not having been paid their NREGA wages for work done seven years ago, the group has questioned the “criminal diversion of funds” from the welfare of the people to militarisation of the region. “The Maoists also bear responsibility for not allowing work on roads and use of panchayat funds, etc. but in areas where there are no Maoists, we found no evidence of the developmental state,” they said, urging all sides to take steps on an interim basis to build confidence and enable a long-term solution to avoid the complete decimation of the rights of the people of Bastar.