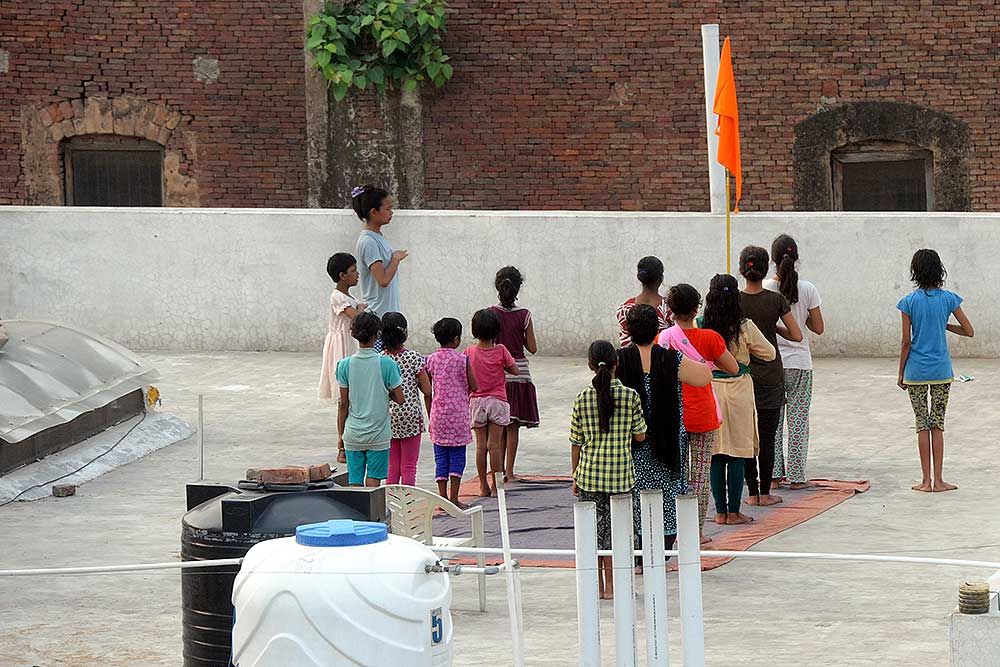 The girls from Assam who were taken to other parts of India for indoctrination by organisations said to be affiliated to the RSS. Credit: Outlook magazine

New Delhi: As many as 31 tribal girls from Assam were trafficked to Gujarat and Punjab by Sewa Bharati, a social service organization affiliated to the Rashtriya Swayamsevak Sangh (RSS) in June last year to “initiate them into Hinduism”, according to reports simultaneously published by Outlook magazine and the investigative news site Cobrapost on Friday.

The reports — investigated separately by the news organisations for about three months, say that the Anti-Human Trafficking Unit of the Crime Branch, Delhi Police, along with some other agencies, swooped down upon the the girls along with their local handlers — one Korobi Basumatary and Sandhya Tikde associated with Sewa Bharati – as soon as they stepped out of the Poorvottar Sampark Kranti Express around 7.40 pm. on June 11, 2015, at the New Delhi Railway Station. The Outlook report also names the involvement of yet another RSS outfit, Rashtriya Sevika Samiti, in the case.

The Crime Branch reportedly was tipped off by Child Line India Foundation, an NGO working for the protection of child rights in India, alleging that these poor girls were being trafficked. The age group of the girls, belonging to Bodo and Santhal communities from Assam’s Kokjrajhar district, ranged between 8 and 14.

The Cobrapost report, by Syed Masroor Hasan, says, “The girls were to be picked by one Ramanikbhai of Halwad in Gujarat and Bina of Patiala in Punjab, both working for the RSS.” The report further stated that “Before the authorities could establish a case of trafficking and rescue the girls from their handlers, a mob of about 200 descended on the station. Within hours the girls were handed over to their new handlers, who would take them to their respective towns, after the authorities conveniently found the reason of their movement from Assam valid — education.  The event did not make any headlines as the authorities pushed the matter under the carpet.”

After spending time with the girls in their present address in in Gujarat and Punjab, both the reporters say the real aim behind the exercise was to instil “Hindu values”.

Outlook reporter Neha Dixit told The Wire, “None of the girls have been put into proper schools. They are being taught local languages and culture.” She wrote in the report, “The Bodo and adivasi girls, taken away from their homes, have now embraced patriarchal ideas of honour, sati and jauhar instead of turning to their own brave tribal women warriors like Tengfakhri, who fought criminals in the British era instead of committing suicide like the Rani of Chhota Kashi. The ‘bravery’ being instilled in these girls is limited to the Sangh’s Hindu state-building efforts as wives, mothers, recruiters and sometimes propagandists.  They return home indoctrinated and embittered, their teenage rebellion channelised into radical religiosity.”

As per the Cobrapost report, “When our reporter suggests that he wants to bring kids back into Hindu fold, Ramanikbhai tells us this is what they are doing: ‘Wahi sab chal raha hai (This is what is going on).’”

No action taken by police

The Outlook report stated, “On June 16, 2015, a week after the girls were taken away, the Assam State Commission for the Protection of Child Rights (ASCPCR) wrote a letter (ASCPCR 37/2015/1) to the ADGP, CID, Assam Police, and marked it to the National Commission for Protection of Child Rights, calling this incident ‘against the provision of Juvenile Justice Act 2000’ and concluded that it amounts to ‘child trafficking’. The commission requested the police ‘to initiate a proper inquiry into the matter and take all necessary steps to bring back all 31 children to Assam for their restoration’.  The police was asked to submit an Action Taken Report to the ASCPCR within five days of receipt of the letter. No action was taken; no report was filed; no cognisance was taken by the National Commission for Protection of Child Rights, which is monitored by the BJP-ruled Centre.”

“After the ASCPCR letter to the police and other government bodies, members of the Child Welfare Committee (CWC) of Kokrajhar made several visits to the houses of the trafficked girls.”

It further said, “On June 22, 2015, Malaya Deka, the chairperson of CWC, Kokrajhar, wrote a letter (CWC/KJR/06/2015) to the CWC, Surendranagar district, Gujarat, requesting the ‘restoration of children from Assam staying at Saraswati Shishu Mandir, Halvad, Surendranagar’. The letter says: ‘…we have to look into these girls’ tender age and agony of being separated from parents and relatives that violates their rights and the whole spirit of Juvenile Justice Act. It will be convenient for you to bring children to Guwahati from where concerned District Child Protection Units will be entrusted to take back children to their families in Kokrajhar.’”

“Sewa Bharati and Rashtra Sevika Samiti, however, sought to circumvent this by obtaining affidavits from the children’s parents, signed in the presence of a notary public and judicial magistrate in Kokrajhar on July 13, 2015, a month after the girls were taken away. The 31 affidavits give consent to the RSS-affiliated ‘Shikshika Manglaben Harishbhai Raval Kanyachatralaya/ Vidya Bharati Saulagna Saraswati Shishu Mandir, Surendranagar, Gujarat’ to take the girls away for education.”

“After the investigation began, RSS volunteers took away every single document and photograph of the girls from the parents so that they could not establish their relationship with them,” Dixit said.

Adha Hasda, the father of one of the girls, Srimukti, told her, “I never wanted to send my daughter so far. What if she fell sick? What if she needed me? Where will I go looking for her?” He accused his neighbour Mangal Mardi, an RSS worker, for forcing him to do so. Mardi’s daughter was also one of the 31 girls sent out of the state. Though Hasda had not spoken to his daughter for over a year now, Mardi said he had and knew that she was studying in Punjab.

“The parents couldn’t follow up with the local handler, Korovi, as she is Guwahati based and had stopped visiting Kokrajhar thereafter. The places from where the girls were picked by her with Sandhya are remote areas, quite far from the Kokrajhar town. They are poor and can’t afford to travel to Guwahati,” she said.

As per a Supreme Court directive in September, 2010, children below the age group of 12 are barred from being sent outside Assam and Manipur for education. The directive came in response to a probe into trafficking of 76 children from these states, most of them minor girls, to “homes” run by Christian missionaries in Tamil Nadu.

In spite of the SC order, over 5000 children have gone missing in Assam between 2012 and 2015, according to a CID report quoted by Outlook. The report quotes a leading child rights activist from Kokrajhar as saying, “Prominent children’s aid organisations, such as Unicef, emphasise on improving social conditions within the children’s local setting, rather than upro­oting them. But the RSS is arm-twisting activists and parents and brazenly flouting laws to send children away for indoctrination. Moreover, with the new BJP government at the Centre and in Assam now, no one wants to touch this case of trafficking of 31 girls as the RSS is involved.”

It adds, “And he adds, laughing, ‘Guess this is the real idea behind PM Modi’s flagship programme for girls—Beti bachao, beti padhao!’”

Soon after the story got published on Friday, Bobeeta Sarma, a prominent member of the Assam Pradesh Congress Committee, tweeted, “Safety of our girls at stake in the name of change? This needs to be brought up in Parliament.”