Wada, Maharashtra: After the Ministry of Home Affairs (MHA) announced it would not include the OBC caste data in the 2021 census, several villages in Thane and Palghar districts decided to protest the move. Within two weeks of the announcement, nearly 100 villages across the two districts passed a resolution to boycott the enumeration process, unless the OBC population is counted and a caste-based census is conducted. The enumeration process for the 2021 census is likely to begin in a few months.

At Valshet village in Shahpur taluka, gram panchayat representatives and residents met on August 21. The agenda was clear. “We wanted to discuss what is in store for the OBC communities. Since 1931, the census has not counted the OBC population. What is assumed is from nearly 90-year-old data. So, we passed a resolution boycotting the enumeration in the current form,” Ramesh Nichite told The Wire. OBCs constitute almost 100% of his village, where more than 700 people live. There are also one or two families from the Katkari community, a Particularly Vulnerable Tribal Group (PVTG).

The resolution to boycott the enumeration process states, “Refusing to collect data on the OBC community in the census would mean denying the constitutional right provided under Article 340 to over 60% population of this country.” Under Article 340 of the Constitution, the president of the country is to appoint a commission to look into the social and educational backwardness of the OBC communities.

“But how do you investigate our condition, and further improve it without even knowing how many of us exist,” asks Prakash Patil, a school teacher in Mumbai and a resident of Shahpur in Thane district. His village, Dahivali, also passed a resolution to boycott the process. 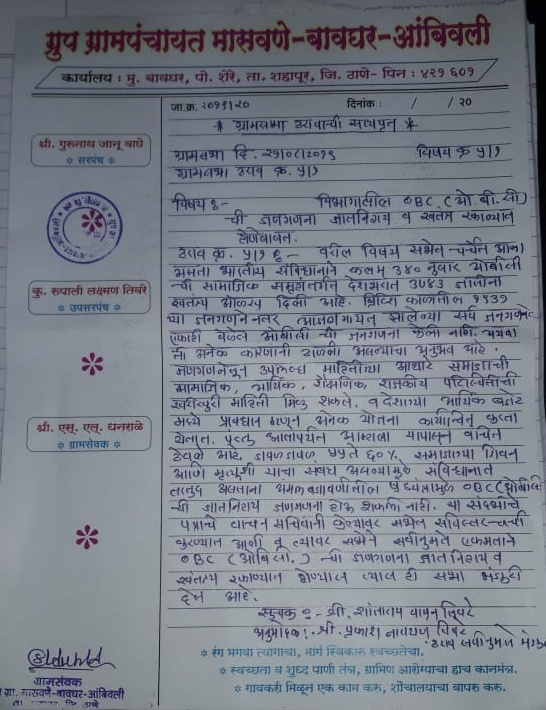 The resolution passed by one of the villages boycotting the 2021 census’ enumeration process. Photo: Sukanya Shantha/The Wire

These efforts and the show of solidarity by OBC communities across the two districts have helped the campaign gain momentum. Several other villages have also joined the protest. In one week, at least 50 villages passed similar resolutions, just from Shahpur taluka of Thane district. This growing awareness among the OBC communities, Hiraman Valimbe, says is the “OBC Sangharsh Mohim” (OBC struggle campaign). His wife Sadhana Valimbe, sarpanch of Dahivali, held a meeting in her village of over 1,700 persons to explain the “rights denied to the community in the absence of census data”. “There is specific data for both the Scheduled Castes and the Scheduled Tribes in the country. But the government does not have proper estimates of the largest section of this country,” she told The Wire.

To take the protest forward, over 1,000 villagers from several talukas of Thane and Palghar districts met at Wada taluka on Sunday for the “OBC Janjagruti Samiti”. They discussed the need for a caste-based census and the inclusion of OBC caste data into the census. This was the second such meeting in the past month.

“If you aren’t counted, you don’t exist. You need to demand your visibility first to be able to ask for what belongs to you rightfully,” explained Sunil Deore, at the meeting. Deore is a Raigad-based social activist and a crusader fighting for the OBC castes’ inclusion in the census data. In his speech, Deore spoke about several instances in the past when caste-based data collection could have been initiated but was sabotaged by the ruling parties. He referred to several commissions, set up both in the pre-independence and post-independence era, and the reasons why the OBC communities were earlier included in the census but were dropped after 1931.

“The data that the government is relying on is pre-independence, and Pakistan was still a part of India at that time. If 30% of colonial-era India has gone to Pakistan, our population has to be computed again. Our share will also go up from the previous estimation of 52%, to over at least 60%. But to be able to prove this, we need new data,” he said.

In 2011, the UPA government undertook the Socio-Economic Caste Census to get data on the caste and economic status of every household in the country. This was done as a separate exercise on completion of the census enumeration process. The Registrar General of India (RGI) and the ministries of rural development and housing and poverty alleviation were involved. While the government released the socio-economic data from the census in 2015, the caste data has not been released.

The 1931 census pegged the OBC population at 52%, the Scheduled Castes at 15.5% and the Scheduled Tribes at around 7%. Even in the absence of any recent empirical or scientifically derived data, the Supreme Court in 1993 limited OBC reservation to 27%, which activists say is less than a half the actual OBC population.

The Supreme Court in 1993 limited OBC reservation to 27%. Photo: PTI

The 2011 census data showed an exponentially high number of castes, around 46 lakh. Calling the data faulty, many experts have pointed to using unscientific methods and the enumerators’ inability to sift through the sub-castes and gotras as commonly mentioned by people when asked about their caste identities. The government too termed the Socio-Economic and Caste Census (SECC) 2011 data as an “errored” one, withholding it from the public.

Also Read: Is Abrogation of Reservation on the Cards?

Even though the upcoming enumeration process is a few months away, the MHA started the pre-tests on August 12, which is scheduled to be completed by September 30. In Maharashtra, work has already begun in Jiwati taluka of Chandrapur district. Government officials have confirmed that over 70% of the work has been completed in the region. In Thane district, Badlapur town has been chosen for the pre-test. However, the work is yet to commence.

The new format has substantial changes, with additions such as details of internet connection and the “other” category in the gender column.