NRIs in New Zealand Protest Against Hathras Brutality, Farm Laws and Decline of Rights in India

The Indian Association of Minorities New Zealand recently demonstrated across the country against the decline of democratic rights in India. 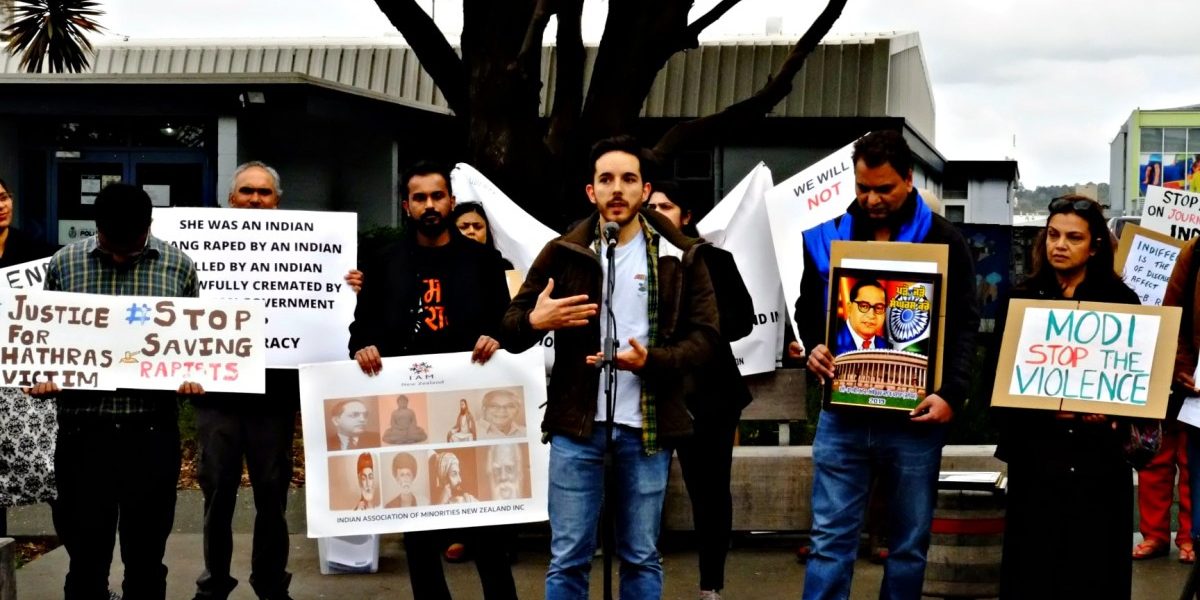 New Delhi: After the US, non-resident Indians (NRIs) gathered in New Zealand this time to peacefully protest against the Hathras brutality, where four men from the upper caste Thakur community gang raped a 19-year-old Dalit woman who later succumbed to her injuries.

The Indian Association of Minorities New Zealand held rallies across the country and raised concerns over the decline of democratic rights in India and demanded justice for the Hathras victim’s family. The NRI community also protested against the accelerated passage of three agricultural laws by the government, against which the Indian farmers took to the streets in the middle of a pandemic. 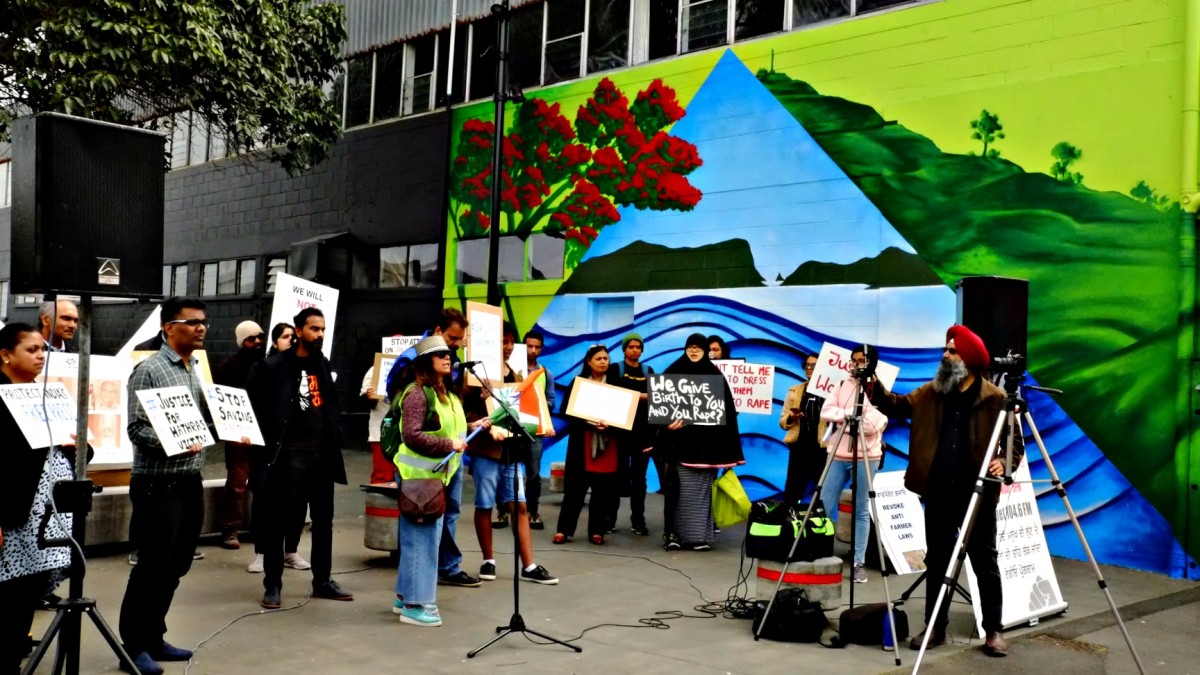 Appended below is the report The Wire received from the Indian Association of Minorities New Zealand.

By the Indian Association of Minorities New Zealand (IAMNZ)

On Saturday October 10, 2020, in three cities (Auckland, Wellington, and Palmerston North) across (Aotearoa) New Zealand the Non Resident Indian (NRI) communities came together to peacefully protest the horrific reality of state neglect and abuse against the rape and unlawful cremation of the body of a young Dalit woman in Hathras (a farming town, less than 200kms away from Delhi). Against the backdrop of this particular incident, the NRI community also was protesting historical injustices that have plagued Indian society and asked for recognition of Dalit and Women’s Rights. Further, the protest attempted to show solidarity with the farmers who were currently protesting the accelerated passing of the 2020 Farmers Bill in the middle of a pandemic.

The protests were attended not only the NRI community, but also Tangata whenua (Indigenous Māori), Pākehā (New Zealanders of European descent), and other immigrant communities. The Auckland event was attended by Green Party politician Ricardo Menéndez March, who said, “Through understanding and supporting each other’s struggles, we can overcome. The Green party knows that there can be no peace without justice as long as patriarchal, capitalist systems are in place. It was a privilege to support the people who stood in front of the Indian Consulate in Onehunga, Auckland, to demand justice for the Dalit community.”

These protests across the country were an amazing opportunity to see the kindness of NRIs displayed when we take care of each other and each other’s worries about being so far away from ‘home’ while also making ‘home’ here. In the process of getting ready for the protest, we asked a few key questions that helped us think about what we were doing and why.

There is an urgent need to tell the Indian government that the international community is watching and concerned. We are concerned about the steady decline of democratic rights overall; however, this blatant disregard of due process when a 19-year-old Dalit woman is gang raped by oppressor caste Hindu men and eventually succumbs to her injuries.

This is not the first horrific rape story out of India, nor is it the first instance of caste-based atrocities. Perhaps it will not be the last; but collectively we have to stand up and make the point that: rape is not acceptable, Dalit rights are important, and we are tired of this Indian government not attending to the core requirements of a democratic society. Women, the poor, and marginalised should not have to live in perpetual fear in their own home, cities, and nation.

According to NCRB, atrocities on Dalits have increased under the current Indian government regime with the NCRB data showing crimes committed by the oppressor castes against Scheduled Caste (SC) people increased by over 7%, and by 26% against Scheduled Tribe (ST) people in 2019 as compared with 2018. As New Zealanders and NRIs, we need to show our solidarity and ask the Indian Government to stop this religious & caste-based discrimination. We are answerable to our next generation and to our collective conscience for not acting when there was a chance and hope, for change.

Why protest in Aotearoa New Zealand?

The international community, especially the democratic nations, need to tell the Indian government we are watching and are concerned. Indians who have made homes and live here, New Zealanders of Indian decent, and New Zealanders of all political inclinations need to make clear that the largest democracy in the world cannot fail to meet its obligations. The ripple effects would be devastating, for the entire world. But above all else, to show that we care when people anywhere (not just in our own backyard) are exposed to horrific crimes and denied their humanity. This demonstration is a request for due process and justice!

What were the demands

We were very categorial in our demands, which included a request for due process and justice for the victims’ family. We were also very clear in pointing out that justice for us did not include capital punishment. Above all, we wanted a statement (followed by action) from our Indian ministers in power to tell us what measures they are undertaking to ensure Indian democracy thrives as opposed to being stifled in these difficult pandemic times.

Standing there, on a typically brisk New Zealand spring morning, was a gentle reminder that when we come together as NRIs, we displayed a deep love for the country that was and will always remain home while also loving the country where we stand. We all did not speak a common language other than English (represented at the protest were speakers of Tamil, Telugu, Hindi, Bangla, Punjabi, Malayalam, Gujarati, Haryanvi, to list but a few), but we dream a common dream. We may not live in India anymore, but when we saw the tiranga fly above our protest group, we were moved to sing our national anthem as a reminder of the possibilities of our nation(s). We protest, we show solidarity, we support each other, in the hopes that India, the largest democracy flourishes to support its incredibly diverse people and their aspirations.

While we were gathering in different cities of the country, we came together as a community that was not only committed to democracy in Aotearoa New Zealand as we were getting ready for our elections here, but also democracy and democratic rights in India. When we ended our protest with a karakia (Māori incantation and prayer), we thought of and prayed for the family of a young girl far away and other marginalised people who are denied their humanity when democracy fails!