"The NRC update has generated increased anxiety and concerns among the Bengali Muslim minority in Assam, who have long been discriminated against due to their perceived status as foreigners, despite possessing the necessary documents to prove their citizenship," the special rapporteurs have said.

New Delhi: Four special rapporteurs of the United Nations Office of the High Commissioner for Human Rights (OHCHCR) have jointly written to Indian external affairs minister Sushma Swaraj expressing “serious concern” over the discrimination of “members of Bengali Muslim minority in Assam” in getting “access to and enjoyment of citizenship status on the basis of their ethnic and religious minority status”.

The update is being carried out under the supervision of the Supreme Court, to honour the Assam Accord signed between the All Assam Students Union (AASU) and the Central government in 1985 to “detect, delete and deport” all “foreigners” who entered the state, mostly from neighbouring Bangladesh, after March 25, 1971. The NRC authorities are mandated to ready the final draft of the updated citizenship register by June 30.

The letter has also sought a response from the Indian government “within 60 days” on eight different allegations of wrongdoing brought to their notice with regard to the NRC update, stating that it “will be made available in a report to be presented to the Human Rights Council for its consideration”.

When asked about the letter, sources in the MEA told The Wire, “Such letters on different issues are received all the time. Reply is sent based on inputs received from relevant ministries”.

“There is no official policy outlining the implications for those who will be excluded from the final NRC. It is reported that they will be treated as foreigners and that their citizenship rights may be revoked in the absence of a prior trial. They may subsequently be asked to prove their citizenship before so-called Foreigners’ Tribunals. In December 2017, a local government minister in Assam was quoted as stating that ‘the NRC is being done to identify illegal Bangladeshis residing in Assam’ and that ‘all those whose names do not figure in the NRC will have to be deported.’

In this context, the NRC update has generated increased anxiety and concerns among the Bengali Muslim minority in Assam, who have long been discriminated against due to their perceived status as foreigners, despite possessing the necessary documents to prove their citizenship. While it is acknowledged that the updating process is generally committed to retaining Indian citizens on the NRC, concerns have been raised that local authorities in Assam, which are deemed to be particularly hostile towards Muslims and people of Bengali descent, may manipulate the verification system in an attempt to exclude many genuine Indian citizens from the updated NRC.”

The special rapporteurs particularly highlighted the May 2, 2017 judgment of the Gauhati high court which directed the Assam Border Police to open inquiries concerning relatives of those persons declared foreigners by the Tribunals. Calling it an “alleged misinterpretation” of the judgement by state coordinator of the NRC Prateek Hajela, leading him to refer two such cases (on May 2 and May 25, 2018) to the Border Police, they stated that the duty to conduct a prior inquiry before keeping such names out of the draft NRC has not been mentioned in the order.

“Once relevant NRC authorities have been informed about the referral of a case, the concerned family member will automatically be excluded from the NRC. Their status will be recorded as ‘pending’ until their citizenship has been determined by a Foreigners’ Tribunal. It is, therefore, alleged that these orders may lead to the wrongful exclusion of close to two million names from the NRC, without a prior investigation and trial. In addition, it is alleged that the orders contravene a High Court judgement of 3 January 2013 (State of Assam vs. Moslem Mondal and Others), which stipulates that automatic referrals to Foreigners’ Tribunals are not permissible as a fair and proper investigation is required prior to the referral of a case.”

The special rapporteurs have underlined that the “orders may also contravene section 3 (1) (a) of the Citizenship Act 1955, which grants citizenship at birth to anyone born in India on/after 26 January 1950, but prior to 1 July 1987.”
Besides seeking clarifications and/or additional information on these allegations from the Indian government, they also sought to know the “steps taken to ensure that the NRC update does not result in statelessness or human rights violations, including arbitrary deprivation of citizenship, mass expulsions, and arbitrary detention” of Bengali Muslims.

Among seeking other information, the letter asked for data from the government on the ethnicity and religion of those individuals who would find themselves excluded from the draft NRC as well as those declared foreigners by the Tribunals, besides an official word on whether they would face detention or deportation. 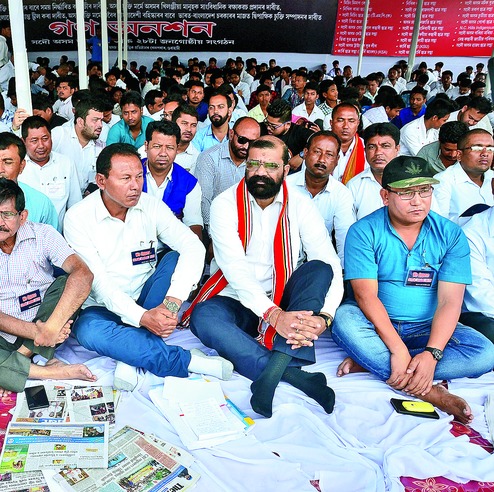 The UN rapporteurs also sought “the present status” of the Citizenship (Amendment) Bill 2016 and asked why it doesn’t include Bengali Muslims.

“The proposed amendment suggests a broader context of vulnerability of Bengali Muslims to unlawful exclusion from Indian citizenship. While we do not wish to prejudge the accuracy of these allegations, we would like to express serious concern that members of the Bengali Muslim minority in Assam have experienced discrimination in access to and enjoyment of citizenship status on the basis of their ethnic and religious minority status. We are particularly concerned that this discrimination is predicted to escalate as a result of the NRC.”

The majority population in Assam has expressed their opposition to the Bill as it will divide the undocumented immigrants allegedly residing in the state on religious grounds. In the last few months, the streets have witnessed vociferous public protests demanding the withdrawal of the Bill as it violates the Assam Accord. As per the Accord, whoever has crossed over the international border into the state without valid documents after March 24, 1971, would be declared a foreigner without considering their religious affiliations. The state would thereafter make provisions for deportation to their country of origin. The Accord brought to an end a six-year-long anti-foreigner movement in the state, but its core clause of “detection, detention and deportation” has not been implemented yet. As per a tripartite agreement reached by the state and Central governments with AASU in 2005, the Registrar General of India, under the supervision of the apex court, is conducting the ongoing update of the NRC only for Assam.