Why I Will Not Register With the NRC

This might be a futile act of personal defiance that could have perilous consequences, but think about it: what if millions of people stay out of the exercise?

Protesters participate in a rally against the amended Citizenship Act and NRC, at August Kranti Maidan in Mumbai, Thursday, December 19, 2019. Photo: PTI

One of the refrains of the government and its supporters and cheerleaders has been that the Citizenship Amendment Act will not affect a ‘single citizen of India.’ That the CAA applies only to those coming from three neighbouring countries – Bangladesh, Pakistan and Afghanistan, all of them Muslim majority nations – and Indians have nothing to worry about.

Muslims do not get discriminated against in any of those three, goes the claim, but where will Hindus go if not to India?

This argument can be demolished in a few minutes, not the least because of the contestable claim that Muslims are not victims of discrimination, both at the individual and the institutional level in Muslim countries.

But more serious, for us in India, is the government’s disingenuous  attempt to draw attention away from the more problematic part of its strategy — the National Register of Citizens.

Clubbed with the CAA, the NRC is a devious and sinister plan that will not just exclude large numbers of Indians, turning them into non-citizens, but also put those citizens at the mercy of the state — the government and bureaucracy, could decide whether someone qualifies or not. In short, if anyone who is not a Muslim thinks she or he is safe, they are mistaken.

The government and its apologists have been saying, continuously, that the NRC has not been rolled out all over India yet. But that is the plan, told to us by no less than Amit Shah.

Sooner than later, that will come to pass.

Every citizen will then have to prove that she or he is Indian. This can be done by presenting documents from an approved list. At this stage, even if one has the documents – and millions of people may not – a bureaucrat could find faults with them. There is the option of not applying, of course, but Indians tend to play it safe and collect every official document they can. 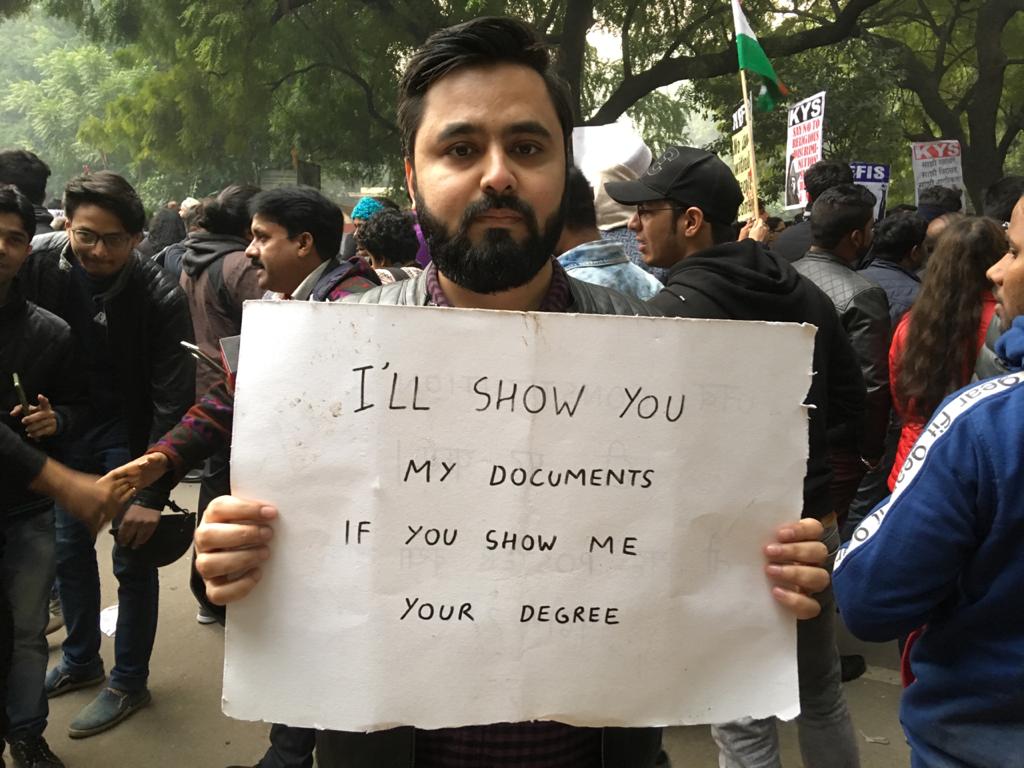 One never knows which one will come in handy when. In the slums of big cities, for example, residents often have Aadhar cards, PAN, ration card, election card and much more which helps them feel secure whenever government agencies come calling.

After the entire NRC exercise is over – and it took several years, at great cost, in Assam – a vast army of bureaucrats will sift through them and publish a list of all the citizens. If your name is in it, you are fine; if not, because your documents were not up to the mark or you had not submitted them, then you are not a citizen, for all practical purposes.

That is where the CAA, the more dangerous part of the exercise, kicks in. Those not in the NRC will have to apply to be considered as citizens. What is more – and this is truly malicious – Muslims who are not in the NRC will not be able to apply. Vast numbers of Muslims, who have lived in India for generations, will find themselves cast out, people without a state.

The state will want to ‘deport’ them – where to, no one knows – and if no other country accepts them, will put them in one of the many detention centres that are being built.

Hindus, notionally, will have it easier. Those not in the NRC will now have to claim that they are refugees from any of the three countries named and have lived in India continuously for six years. Assuming a large number of people qualify, it will reduce them to another, perhaps lesser status in their own country which they have been citizens of all along. Imagine, one day, if such a citizen does something that the government does not like — it could easily ‘open your file’ and freeze your status while it is examining it.

Hindus and others may feel they have been privileged by the NRC-CAA, but in actual terms, they are equally vulnerable.

Birthright citizenship cannot be taken away except under very rare circumstances — a newly minted citizen with ‘refugee’ status could face the danger of being uncitizened. This will put countless number of people at risk and could keep them in line for fear of angering the government.

This appalling plan has provoked Harsh Mander to say that he will register himself as Muslim — it is a brave, defiant attempt to dare the government to try and declare him a non-citizen. But there is another alternative — not go through the process at all.

Refuse to not just participate in the NRC, but also not submit any affidavit to be accepted under the CAA. I plan to do just that.

After being born here and spending my life as a citizen of India who has claimed all the rights, and fulfilled at the duties, I refuse to submit myself to further bureaucratic scrutiny to prove what I know and what the state has acknowledged. I have all the official proof that is needed – an election card, a passport and much more – to demonstrate that I am a proper, legal citizen of India; now to declare myself a refugee, is unacceptable.

Refugee from where? And why? It would be a lie, to ask for something that already belongs to me.

This might be a futile act of personal defiance that could have perilous consequences, but think about it: what if millions of people stay out of it. Knowing this dispensation, it is possible that it will be happy, since it will keep out those who would not have voted for it any way.

Electoral politics is always a critical part of the BJP’s ‘master strategists’ and the NRC-CAA, while reeking of deeply held communal prejudice, also takes into account the voting potential of those who will be left in – especially the Hindus of the north, where the BJP has always had support, and also excludes those, mainly Muslims, who don’t vote for the party. (One of the other, more perverted fantasies of the Hindutva brigade is that the population of India will reduce dramatically!)

The CAA, therefore, has to be seen in conjunction with the NRC. In Assam, where the context of holding this exercise was very different and unique, it led to unintended consequences — of the 1.9 million people not in the Register, a vast number were Hindus.

This the BJP did not want and after objections by the local unit, is now backtracking on it. It is bound to be even more cumbersome and full of problems on a national level.

Nothing short of getting this entire scheme cancelled will work. The protests all over the country, which have shown the depth of anger against the government on many issues, concentrated mainly on the CAA.

It will be a pity if after the initial enthusiasm and fervour, the protests fizzle out. The focus must now shift to the NRC too. If the CAA is discriminates against Muslims from other countries, the NRC is inimical to the existing citizens of India and therefore, is far more ominous.