No Resolution in Sight, Kashmir's Problems Are Being Increasingly Made Invisible

Who should Kashmiris turn to, the Supreme Court or the law of the land? 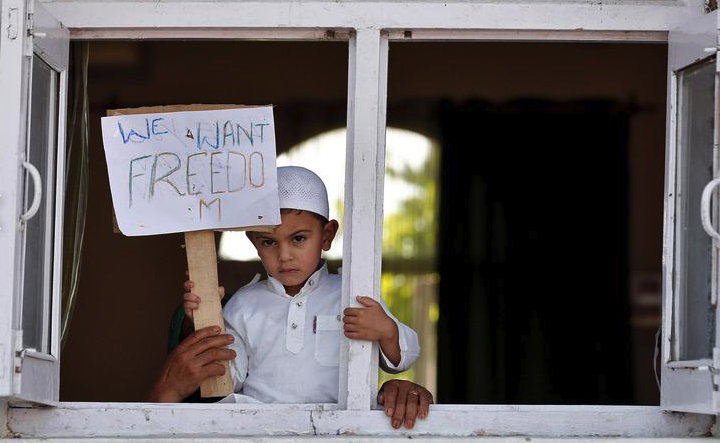 A Kashmiri boy displays a placard from a window at a protest site after Friday prayers during restrictions, after scrapping of the special constitutional status for Kashmir by the Indian government, in Srinagar, August 23, 2019. REUTERS/Adnan Abidi

A month after Article 370 was revoked, how well is the Centre placed in the Union Territory?

All its claims for an incremental return to “normalcy” notwithstanding, it should now be obvious that the government of the day is engaged in a battle of attrition with fellow Indians in the Valley and in other areas of the new Union Territory.

Even if one were to discount “tendentious” reports about the situation in Kashmir “perpetrated” by foreign media agencies “hostile” to India under Modi, the question as to why the all-powerful government is still unable or unwilling to lift restrictions on the civic and democratic rights of citizens in the Valley remains unanswered.

As far as we can tell, the government’s self-congratulatory claim of good governance in Kashmir pertains to simply having ensured that there are no bodies on the ground.

That this has been achieved – if accurate – by locking an entire province up and cutting off inhabitants from one another seems like a poor gloss on the body-count idea. It resembles another familiar argument which always seeks to persuade us that nobody dies of starvation in India anymore. That lakhs die from a more insidious phenomenon of malnutrition is disregarded.

That Kashmiris are suffering a fate akin to slow-consuming malnutrition seems obvious. The great thing about malnutrition is, as we sadly know, that it can be made to remain invisible.

As the articulate ex-mayor of Srinagar city averred in an interview to NDTV, Kashmiris are not likely to resign themselves to the double whammy of having been deprived of “special status”— a covenant on which the erstwhile state had agreed to accede to the Indian dominion — and the added humiliation of having been diminished to the status of a Union Territory. 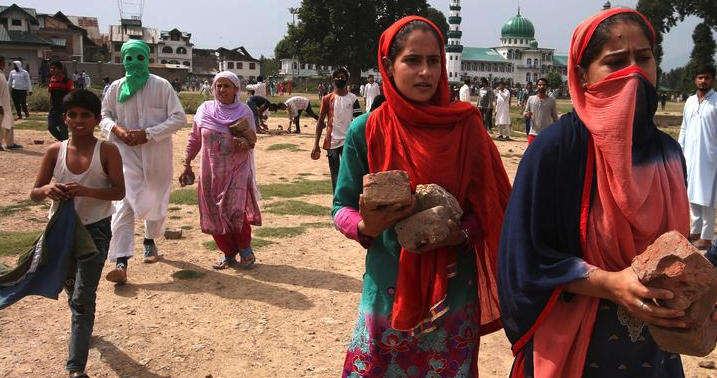 Nor are they able to comprehend why they have been denied the democratic right to peaceful assembly and protest against the measures that have been taken without as much as a say-so from the people affected by them. Such denial, additionally seems not only to contravene fundamental democratic rights of peaceful expression and association, but the entire history of India’s freedom struggle against colonial rule. It also contravenes the subsequent tradition of many other popular demands granted in independent India to people agitating for their rights – be that the historic formation of Andhra Pradesh or the other states that have since followed.

The Centre’s bind seems to be that it cannot allow any such expression or popular demonstration till the matter blows over in the forthcoming UN General Assembly session, at the end of September; nor (in what is a clear Catch 22 situation) will it look “good” to remind people of the incarceration of political leaders and workers till the speechified triumph in the general assembly.

However this may be contested, it is the covenant of the “special status” which helped the mainstream political leadership in Kashmir keep their constituents aligned with the Indian republic since the state first negotiated the terms of its accession to India.

Having rescinded that covenant — one that was meant to be transitional only till the constituent assembly of the state had formally adopted it — the Centre has taken away from mainstream Kashmiri leadership that legitimation and plunged them into an existential crisis. Clearly, it would be idle to expect them to pursue politics now on a plank of abject acquiescence.

Nor may it be argued that the “separatists” had little love for Article 370. Separatists’ politics based itself on a demographic argument and thus they can hardly be expected to be pleased with a prospect now of a legitimised demographic influx.

If this is acknowledged, the shape of politics in the Valley – if and when the incarcerated leaders of mainstream parties are released – is likely to be one in which all sections will have no option but to find a common cause in resisting such influx. Surely, Assam ought to have been an instructive example here.

Addressing the view that new, collaborative leaderships are now spawning through the Panchayat system, the history of such dislodgement in other parts of the country does not paint an optimistic picture.

Equally, and this has been pointed out before with facts and figures, the “development” argument fools nobody, given that on most counts, the state remains ahead of many other states in the republic,  including Gujarat.  That this idea of “development” may, in fact, be fraught with very deleterious consequences for the ecology of Kashmir is already an anxious thought within Kashmiris who do not wish to see its forests destroyed by predictable cartels seeking oil and other resources.

Also read: Kashmir and I: Negotiating a New Reality After August 5

As for the Jammu province, there is already silent resentment brewing regarding the likelihood that the lifting of curbs on the acquisition of property and out-of-state influx into state jobs are more likely to affect the lives and prospects of Jammuites than of those in the Valley — a stinging thought that. As for Ladakh, voices are already being heard that they will not entertain outsiders wishing to acquire land in the region.

Considerable interest surrounds what might or might not happen regarding the challenges to the revocation of Article 370 in the highest court of the land.

It has not gone unnoticed that the honourable court has seen some ground for deliberating on the constitutional merit of the measure taken by the government, refusing the political plea by the government that court proceedings in this matter may harm the national cause as the matter is articulated in the UN, etc.

A cynical view being voiced is that the court may take its own time in cogitating on the issues, leading to a fait accompli. But having decided to refer the matter to a five-judge constitutional bench, it is inevitable that many will attach hope to the deliberations of that bench.

Should, hypothetically, the honourable Supreme Court finally come to the view that the revocation of Article 370 may be said to have been consistent with the required constitutionality, the Modi government would have scored a victory of very far-reaching dimensions.

Given the penetration of the executive into the legislature now, the government may feel enthused to bring about more far-reaching amendments to the constitution, bearing on the nature of the Indian state itself.

On the other hand, were the revocation to be held obnoxious to the required constitutional procedure, and struck down, a wholly new and consequential situation would have emerged that would not but generate a potentially decisive shift in the lop-sided equation between government and opposition, both within the legislature and on the street.

Indeed, few court judgments in recent times would match the fallout, one way or another, of what may emerge from the highest court in this one matter.

All in all, we are witnessing a very unenviable and uneasy time in the life of the republic.