In its supplementary chargesheet in the Elgar Parishad case, the NIA has called human rights organisations "fronts" for the banned CPI (Maoist).

Mumbai: When a “dreaded Maoist” carries a reward of Rs 50 lakh on his head, and has several central and state agencies tracking him closely, one would assume that it would be next to impossible for the person to lead a regular life. But one of the prime witnesses in the National Investigation Agency’s Elgar Parishad probe has claimed that Milind Teltumbde – believed to be a top-rung leader of the banned CPI (Maoist) organisation who has allegedly been involved in several underground movements since 1996 – not only lived in cities of central India but also moved between states to meet his family and friends.

In an eight-page statement, recorded before a NIA officer under Section 161 of the Code of Criminal Procedure, a witness has claimed that Milind had lived in Dhammadeep Nagar, situated in Itabhatti Chowk in Nagpur. The witness claims that Milind had bought a property worth Rs 7 lakh under the name of one associate, “Dhelu Verma”, and stayed there between January 2017 and April 2018. Milind, according to the NIA, has been using several alias names – Anil, Deepak, Sahyadri and Comrade M are a few among them.

The witness has also claimed that Milind, along with two other party members, had travelled in a car from Nagpur to Bhopal and met his sister living there. Here, the witness claims Milind had had lunch and also met one of his childhood friends.

What is particularly intriguing about this witness is that he claims that Milind stayed in a city where the Pune police had trained all its focus at the beginning of 2018. Most raids were conducted around that time in Nagpur, along with other cities across the country. The witness claims that Milind had to eventually leave after his location had been “exposed”.

During this stay, the witness has also claimed that Milind had tried to exchange a large cache of old currency, worth Rs 50 lakh, following the sudden demonetisation drive undertaken by the Central government in 2016. Similar claims about the exchange of currency have also been made by several other witnesses in the earlier parts of the chargesheet that was filed by the Pune police, which was investigating the case until last December. Since the NIA took over this case in January, this is the first chargesheet filed by the agency, running in to over 10,000 pages.

This claim, about Milind operating from a metro city for over 16 months, is particularly crucial because if credible, it exposes the failure of the security agency to track one of the most wanted Maoists, who perhaps after Mallujjulla Venugopal alias Bhupathi – Politburo and Central Committee member of the CPI (Maoist) who carries a Rs 60 lakh prize on his head – carries the highest prize money for being found.

The chargesheet, filed earlier this month, has listed 147 witnesses and of them, recorded 48 statements so far. Among these statements, the NIA is relying on statements made by six witnesses – who sources say have also deposed before a magistrate – to build its case against the 16 arrested human rights activists, lawyers and academics from different parts of the country. These statements, making a range of claims from arms training undertaken by a few arrested accused in the forests of central India to some trying to “reinvent Dalit militancy” in the country, was first reported by The Wire. The agency has, strangely, dropped statements of lawyers from Nagpur and Chandigarh. These lawyers have been representing those arrested in the case, but were still examined by the NIA in its Mumbai office. 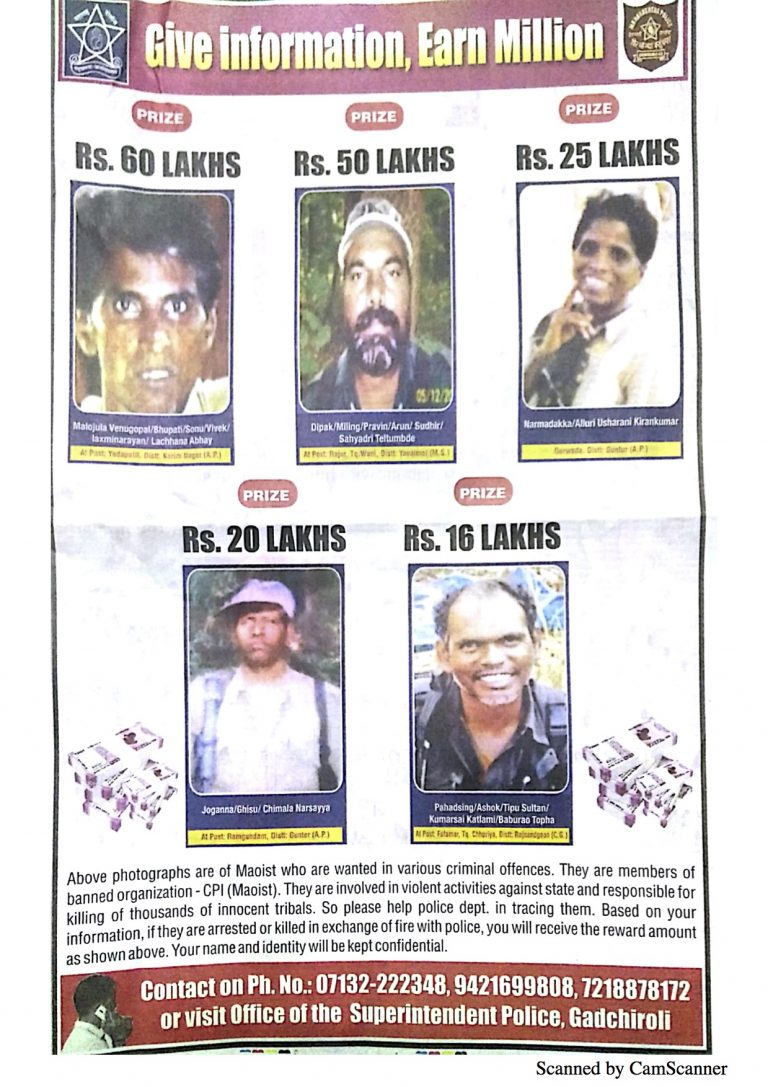 While one of the witnesses had claimed that Anand Teltumbde was keen on “reinventing Dalit militancy”, the NIA has also attached an email, alleged written by Anand to Rona Wilson, claiming that his speech was “wilfully distorted”. The email was written soon after the said event organised by the now banned Revolutionary Democratic Front (RDF) in Hyderabad on April 22-23, 2013.

“I never recommended even remotely that Dalits should accept Maoist leadership. Rather in the conference I had serious conflict with comrades of RDF who revealed that they still have a worn out understanding of the Marxian metaphor of “base and superstructure”,” Anand’s email to Wilson says. He further adds, “Not reporting this significant differences in a serious issues of caste and distorting statements is not only objectionable but also least expected  of the revolutionary comrade.” 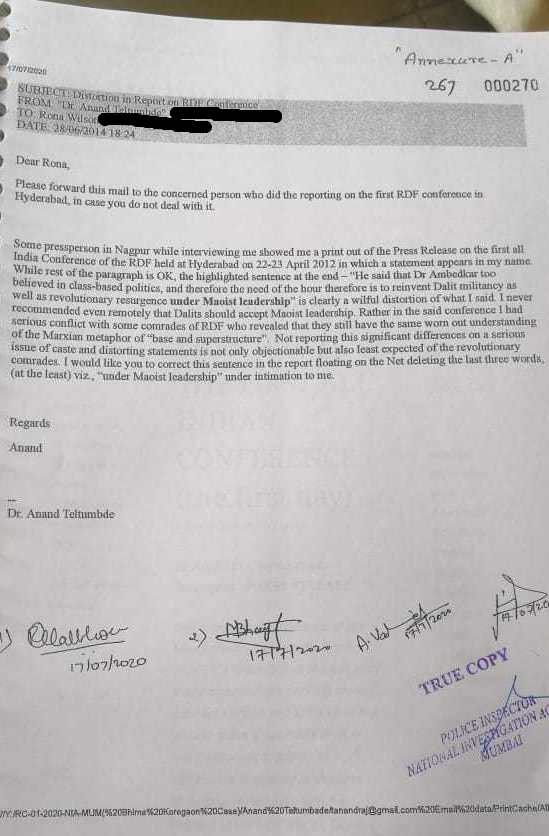 The email from Anand Teltumbde to Rona Wilson.

The recent chargesheet, filed after the arrest of seven persons since April, attributes roles to several of those in jail since June 2018. Those arrested by the NIA include academic and civil liberties activist Anand Teltumbde, journalist and activist Gautam Navalakha, Delhi University associate professor Hany Babu, Kabir Kala Manch’s cultural activists Sagar Gorkhe, Ramesh Gaichor and Jyoti Jagtap, and an 83-year-old Jesuit priest and activist based in Ranchi Stan Swamy.

Soon after the first round of arrests on June 6, 2018, the then investigating agency, Pune police, had claimed that the accused persons were a part of the banned CPI (Maoist) and operated as its urban cadre. The police had called them “Urban Naxals”. In one of the press conferences addressed soon after the arrests, the then Additional Directorate General of Police (ADGP) of Maharashtra, Param Bir Singh, had flashed a whole bunch of letters purportedly exchanged between those arrested and those underground, including Milind Teltumbde. In all, 13 letters had surfaced at that time. These letters were first circulated in the media, public opinion was generated, particularly against labour rights activist and academic Sudha Bharadwaj, and she was eventually arrested end of August 2018.

While the authenticity of these letters has been questioned multiple times both by the Supreme Court and the defence lawyers, they were later added to the chargesheet. Whether credible or not, these letters are now a part of court evidence and will come up next only during the trial.

Alleged letters cited by the NIA.

At least 10 more similar letters have emerged in the recent supplementary chargesheet too. Most letters were exchanged between “comrade Prakash” and those arrested in the case. These letters discuss funds needed for conducting “fact-finding” visits or for carrying out a study on “Dalit issues”. In one email, which was purportedly written by one Chandrashekhar to Comrade VV (supposedly Vara Vara Rao), concerns are raised over arrests and supposed “patriarchal attitude” and “ambitious tendencies” of comrade R (supposedly Rona Wilson). “The LC comrades are of the view that R is not psychologically strong enough to bear prolonged incarceration; he might break if subjected to intense interrogation.” The sender also wonders how “communication between comrades” was leaked to the media. “The point of great concern is how exactly was it leaked? By whose negligence?” the sender, “Chandrashekhar”, asks.

What is intriguing about these letters are that while the NIA and, in the past, the Pune police have claimed that each of these arrested accused persons had code names and would operate using their fake identities, while writing letters they used their real names. So, Rona Wilson became Comrade Rona and not “Kuppu”, “R” or “RW”.

Role of human rights organisation under the scanner

Several active human rights organisations and collectives have been either identified as a “front” of the banned CPI (Maoist) organisation or “Maoists” have been claimed to have infiltrated some of its activities. Among the many organisations, the Indian Association of People’s Lawyers (IAPL) has been termed as an “outfit” of the banned Maoist organisation. IAPL, in existence for over a decade, has had retired high court Judge Hosbet Suresh as its president. Justice Suresh, who recently passed away, is a well-known champion of human rights. He remained active in public life for over 25 years after retiring as a Bombay high court judge.

The organisation, like most other civil liberties and human rights organisation in the state, has actively organised fact-finding visits and has come out with strong reports on issues relating to human rights violations. The last one, just before the arrests began in the case, was in 2018 when a large team of lawyers, activists and journalists have visited the jungles of Gadchiroli to bring out a ground report on the killing of 40 alleged Naxals. The Wire was the first to have reported about the killings of civilians, including children, in this attack.

This is not the first time that an investigating agency has called the IAPL a frontal outfit. In 2014, then Bhartiya Janata Party (BJP) MP A.T. Nana Patil asked in an unstarred question in the Lok Sabha if “the Naxalites ensconced in deep forests have started spreading their wings throughout the country by forming front organisations”. In his response, on February 18, 2014, Congress leader and then minister of state for home R.P.N. Singh said, “The CPI (Maoist) underground cadres shift to softer areas including urban areas looking for safe hideouts. On such occasions, the overground front organisations provide safe hideouts to armed cadres.”

Along with this response, Singh also annexed a list of 74 organisations which he said were active as “frontal organisations” in 16 states. From Maharashtra, among seven others, the Kabir Kala Manch (KKM) and IAPL were named as fronts of the banned CPI (Maoist).

According to the investigating agency, Gadling, Wilson and several other lawyers, besides those arrested in the case, were actively involved in IAPL. Among the 48 witness statements, the NIA has also recorded statements of several prominent Mumbai based lawyers, who, according to the NIA, have claimed that they were a part of IAPL but had eventually resigned because of its “Maoist connections”.

Similarly, the NIA has also claimed the Coordination of Democratic Rights Organisation (CDRO) was also involved in banned activities. Gautam Navlakha, according to the NIA, would receive several emails on the organisation’s email ID and that he allegedly would coordinate with several underground leaders. Other “frontal organisation” named are Anuradha Ghandy Memorial Committee (AGMC), Kabir Kala Manch (KKM), Persecuted Prisoners’ Solidarity Committee (PPSC), Committee for Release of Political Prisoners (CRPP), Committee for Protection of Democratic Rights (CPDR), Peoples Union for Democratic Rights (PUDR), Democratic Students Union (DSU), Visthapan Virodhi Jan Vikas Aandolan (VVJVA), Revolutionary Writers Association (RWA), Committee for Defence and Release of G N Saibaba (who is convicted in another case). “It has been established that the members of CPI (Maoist) were using these organisations to further their agenda,” the NIA claims in the chargesheet.

This article has been edited to indicate that the witness statements were recorded before NIA officials and not a magistrate.