"Our recent report on the human rights situation has not been followed up with meaningful improvements," Michelle Bachelet said, referring to how the Indian authorities had dismissed the report as biased. File photo of a protest in Kashmir. Credit: Reuters/Danish Ismail

New Delhi: The new UN High Commissioner for Human Rights, Michelle Bachelet, has backed the first ever report on the humans rights situation in Jammu and Kashmir issued by her predecessor and reiterated the request for access to visit “both sides of the line of the control”.

Bachelet, who took over as UN human rights commissioner from Zeid Raad Al Hussein last month, delivered her first speech to the Human Rights Council in Geneva on September 10.

In her maiden statement, Bachelet made references to human rights hot spots – from the Rohingya crisis to Kashmir, China’s treatment of the Uighur, Saudi Arabia and refugees in Europe.

In June, Zeid as UN human rights commissioner had released a report on the “human rights situation” in Jammu and Kashmir, focussing on the period from July 2016 to April 2018. The report stated that “allegations of widespread and serious human rights violations were received, notably excessive use of force by Indian security forces that led to numerous civilian casualties”.

Bachelet lamented the fact that the report had not got a favourable reception from the relevant authorities. “In Kashmir, our recent report on the human rights situation has not been followed up with meaningful improvements, or even open and serious discussions on how the grave issues raised could be addressed,” she said. 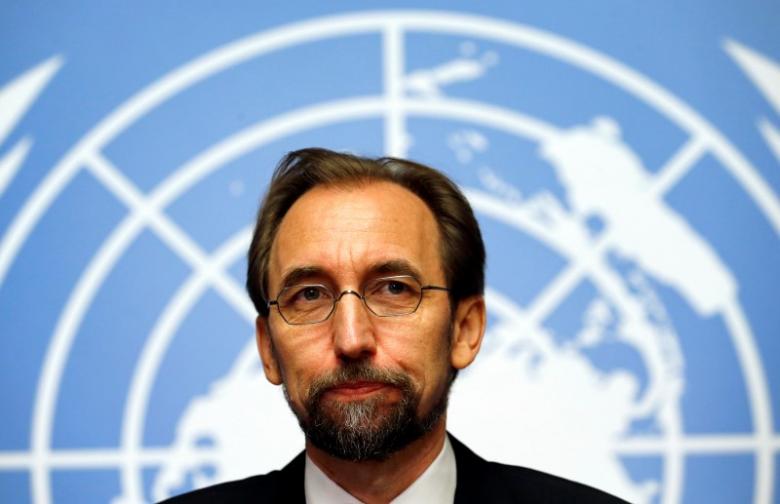 While rejecting the report, the official Indian response had implied that Zeid was ‘biased’ against New Delhi on the Kashmir issue. “Our protest and views in the matter have been conveyed unequivocally to the Office of the High Commissioner for Human Rights. We are deeply concerned that individual prejudices are being allowed to undermine the credibility of a UN institution,” said ministry of external affairs spokesperson Raveesh Kumar on June 14.

This position was further reiterated in New York, when Pakistan brought up the UN human rights council report at a Security Council open debate on children and armed conflict. The Indian representative retorted that the UNHRC report on Kashmir was “reflecting the clear bias of an official who was acting without any mandate whatsoever and relied on unverified sources of information; a document that was not even found fit to be considered by the membership of the forum where it was submitted”.

The Indian statements implying personal bias led the commissioner’s spokesperson to express disappointment at the reaction from the Indian authorities. He also dismissed reports published by the Indian media that Zeid had been ‘influenced’ by certain Pakistani individuals.

In the last few months of his term, Zeid had called for an international commission of inquiry into the allegations of human rights abuses in Kashmir, but it wasn’t taken up during the last session, which ended on July 6. His proposal was also implicitly supported by UN Secretary General Antonio Guterres.

Bachelet did not reiterate the demand for an international probe, but she resumed the call for access to both the Indian and Pakistani sides of Jammu and Kashmir. “The people of Kashmir have exactly the same rights to justice and dignity as people all over the world, and we urge the authorities to respect them. The office continues to request permission to visit both sides of the Line of Control, and in the meantime, will continue its monitoring and reporting,” she said on Monday.

The former two-time president of Chile also mentioned India in the context of the Supreme Court’s decision to read down Section 377 of the Indian Penal Code and de-criminalise same-sex relations. “Laws that criminalise consensual adult relationships are, as Chief Justice [Dipak] Misra said, manifestly arbitrary and a source of discrimination and harassment. I very much hope other countries around the world will look to India’s example in this respect,” she added.

While she didn’t press for an international probe on Kashmir, Bachelet urged the council to pass a resolution to establish a quasi-judicial body to collect evidence for a possible future war crimes trial on the “genocide” against the Rohingya.

“I also welcome efforts by member states at this council to establish an independent international mechanism for Myanmar, to collect, consolidate, preserve and analyse evidence of the most serious international crimes, in order to expedite fair and independent trials in national and international courts. This mechanism would also complement and support the preliminary examination of the ICC prosecutor,” she said.

Remaining in the Indian neighbourhood, the UN human rights chief noted that the Sri Lankan government has set up the Office of Missing Persons and was drafting legislation to establish an Office for Reparations.

“More progress in advancing accountability and truth-seeking could have great weight in the long-term stability and prosperity of the nation. Recurrent incidents of racist and inter-communal violence are disturbing, as are announced plans to resume use of the death penalty,” she said.

Bachelet also called on China to allow UN monitors to look at “deeply disturbing” allegations of ‘re-education’ camps for Uighurs in Xinjiang province. She urged Saudi Arabia to release human rights defenders and take steps for accountability of perpetrators of air strikes on civilians in Yemen.