Authorities at the Islamic University of Science & Technology reportedly told students attending a convocation rehearsal that if they are not prepared to stand up during the national anthem, they should 'sit at home'.

Srinagar: The ‘enforced nationalism’ debate that started some years ago when some moviegoers were attacked in Delhi and Bangalore for not standing up when the national anthem was played has once again reared its head, this time in the Islamic University of Science Technology (IUST).

Though it was established in 2005 at Awantipora, some 28 kilometres from Srinagar, the university will hold its first-ever convocation on March 1. And the IUST authorities have reportedly asked students to maintain protocol by standing up for the national anthem or else “sit at home”.

Students who have been invited to the convocation allege that during rehearsals at the Sher-i-Kashmir International Conference Centre (SKICC) in Srinagar, the venue for the convocation, they were asked to stand up for the national anthem or “stay at home and your medals will be sent there”.

Around 268 students and alumni, who were toppers during their time at the university, have been invited to the convocation.

While University Grants Commission (UGC) chairman D.P. Singh, will be chief guest, Jammu and Kashmir lieutenant general Manoj Sinha, who is also chancellor of the university, will attend the convocation.

A student who was present during the rehearsal, which was held on February 25, told The Wire, “In front of all the students, they told us in strict words, ‘Don’t create problems for us. If you don’t want to stand up for the national anthem, sit at home, we will send your gold medal to your home’.” 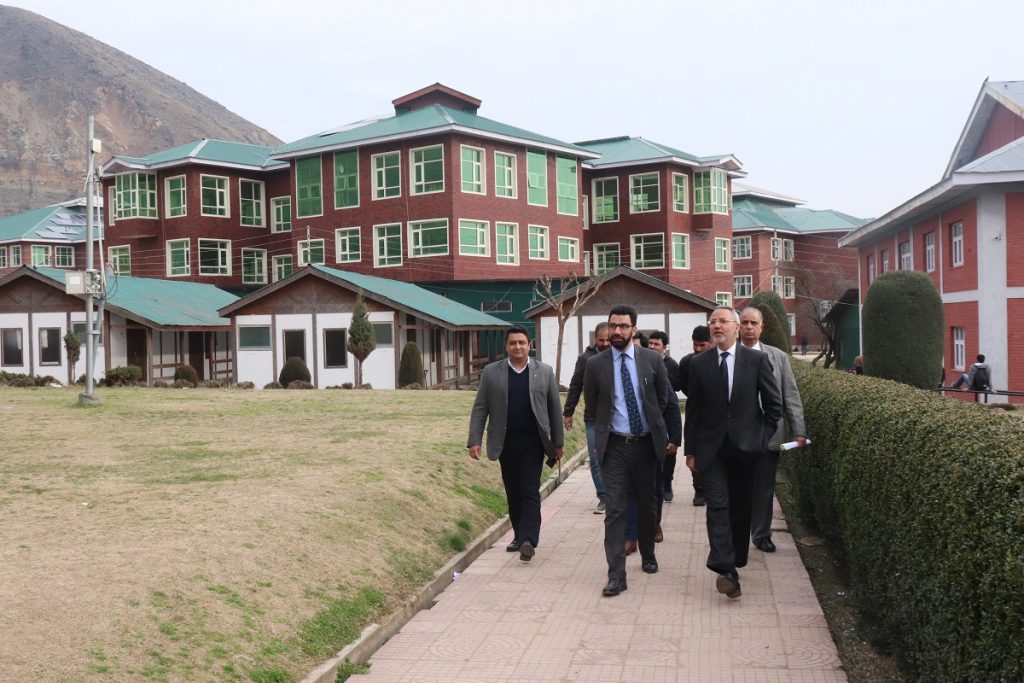 Several students told The Wire that they are not comfortable with the university’s diktat, saying it should be up to them to stand up for the national anthem or not.

He said the constitution, under Article 19(a) and Article 25(1), gives freedom of speech and freedom of conscience. “And my conscience does not allow me to stand up for the national anthem,” the student said.

The Supreme Court in a January 2018 order said that if the national anthem is played, people must show respect by standing up. In its verdict, it cited a 2015 Union home ministry order which said. “Whenever the [national anthem] is sung or played, the audience shall stand to attention.”

The same court judgment revised an interim order from 2016, which made playing the national anthem in cinema halls mandatory before the start of a movie. That order faced criticism for promoting “aggressive hyper-nationalism“. Concerns were also expressed after a disabled person was assaulted for not standing up.

Given the Valley’s fragile political ecosystem, Kashmiris who take part in ‘national’ activities or political movements are seen as acquiescing in the Centre’s treatment of the region and even as “traitors” by separatist and militant groups.  People have said that they face bullying and boycotts over such actions. At the height of militancy, demonstrating overt support for national activities has even cost people their lives.

These fears are paramount in the minds of students and alumni who will participate in the convocation, as they want to avoid being shunned by Kashmiri civil society. They are upset with the university’s direction in the current situation.

“When I mentioned this [the requirement to stand up for the national anthem] to my friends, they gave me an ugly look. They bullied me for agreeing to receive the medal in this manner. People question these things, saying I am standing up for something that is associated with oppression in the Valley,” a student, requesting anonymity, told The Wire.

Some said that even their families have told them their stand on the sensitive issue.

However, the students fear that they might be caught between a rock and hard place. “If I do not stand up, I fear I will be charged under draconian laws like the Unlaful Activities (Prevention) Act. Going by the trend in India, Kashmiris are soft targets for such things. They will charge you with any stringent law. So, if people will stand up, out of coercion, I too have to,” said a student. “But I am sure if anyone among us prefers to sit, there will be repercussions.”

People stand in a movie theatre as the national anthem plays. Photo: PTI

However, IUST’s registrar, Naseer Iqbal, speaking to The Wire, denied telling students that if they do not plan to stand for the anthem, they should not bother to attend the convocation. “We have said maintain the protocol and decorum of the convocation,” he said.

Iqbal explained that playing the national anthem is part of the protocol of the convocation. “Islamic University is holding its first convocation despite existing for the last fifteen years. We do not want to have any issue during the convocation and that is why we have told them to follow the protocol,” he said.

Explaining the rationale, Iqbal said it will “not look nice” if the students continue to sit, because they are gold medalists. “They have come to receive the gold medals and they are supposed to maintain protocol,” Iqbal told The Wire.

In 2016, IUST had planned to hold its first convocation. It was cancelled due to the unrest sparked by the killing of Hizbul Mujahideen commander Burhan Wani.

Some alumni have also questioned the timing of the convocation, raising concerns over the decision taken by the university amid the COVID-19 pandemic.

“The university could not hold the convocation for 15 years. I am surprised at the timing. This is a political move, through which the administration wants to portray that everything is ‘normal’ here,” said an alumnus.