The Nanar Refinery Will Be Moved, but Larger Questions Remain

In the name of development, politicians and officials have bowed down to investors – local and foreign – at the cost of farmers.

A protest against the Nanar refinery.

The Nanar refinery in Ratnagiri district was to be the biggest for crude oil. An “ultra” project – around 16,000 acres of land were to be acquired – it inevitably faced opposition.

The project was called a “green refinery” – of course in name only. It was clear that the BJP was trying to hoodwink the people.

To see how this became possible, we need to go back to 2007. That year, under the aegis of Petrochemical Investment Region, the government created a corridor from Gujarat to West Bengal. Coastal regulations were removed and the refinery project was just the first step after the deregulation.

In 2017, local farmers began receiving notices under the Land Acquisition Act. There was stiff opposition. The Refinery Sangharsh Samiti was formed and under its banner, protests strengthened. It found support among many environmentalists, as well as locals who had migrated to Mumbai for employment.

This came to the attention of various political parties, including the Shiv Sena, who joined the fray. Eventually, in February this year, the project was moved from Nanar.

But larger questions still remain. Multi-crore projects that involve land acquisition are like a windfall for political leaders, irrespective of their party lineage.

Take, for example, the Mumbai-Goa national highway and the Delhi-Mumbai business corridor near Mandgao. For these projects, land acquisition has been completed. For political agents, cash has been flowing and even payments by cheque have not stopped illegal diversion of funds.

People from the Konkan region have repeatedly been subjected to the manoeuverings of the government and the private sector. I have seen the destruction of rivers, bays and coastal areas. Those relying on these resources for livelihood have been marginalised. In addition, they received neither jobs, rehabilitation packages nor a fair value for their land.

Over the years, people have become wiser to the government’s backtracking and lies. After the Dabhol Power Company drowned in the Enron fiasco, people have realised that the government doesn’t take into view their concerns before making decisions.

If the government doesn’t have the moral courage to face the people, how can we believe that it has the people’s welfare at heart? Now, under the name of “infrastructure”, there is an influx of expressways, bullet trains and economic corridors that are ostensibly proposed for the welfare of the people. But they line the pockets of entrepreneurs. The area where Nanar oil refinery project is planned. As many as 17 villages in Ratnagiri and Sindhudurg districts of Maharashtra would be displaced due to the refinery.

Once a project has been approved in the higher echelons, agents of all political hues swing into action. Land deals skyrocket, shady deals and criminal actions proliferate. The police and the revenue department turn a blind eye because many officials are involved. Investors jump in to buy land cheap, and even after the project is announced, farmers are coerced into selling their lands at throwaway prices.

Next, these agents, who are not even residents of the region, consent for the project. This conniving deprives the locals of their lands and takes away their right to protest, as they are no longer landowners.

To highlight this, a list of non-local buyers was given to a Shiva Sena minister. When the vidhan sabha demanded that the names of these buyers be revealed, the minister replied that this could not be done as their lives would be endangered.

The government then started telling people that almost all land for the project had been acquired, shattering the farmers even further.

Under what law was land acquired in Nanar for the refinery? Even the collector and the land acquisition authority have not been able to answer this question till 2017. The Land Requisition Act came into force in 2013. Under its provisions, requisition could not be done under the Maharastra Industrial Development Corporation’s (MIDC) rules, yet the government started illegal requisitioning from May 2017.

The required permission came into law in April 2018. This act was quietly passed, without any announcement. Meanwhile, the government indulged in mendacious activities for one whole year. Changes in the law have removed national projects from its purview. For such projects, the permission of 70% of the farmers and local residents is not required anymore; social and environmental impact clearances are no longer required. 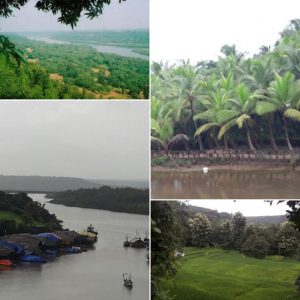 Landscape of the region.

Investors, both Indian and foreign, have reaped the benefits of these changes. The BJP professes national pride, yet encourages foreign investors at the cost of the local population in the name of ease of doing business.

For the welfare of the nation and creation of jobs, three things are required: capital, land and labour. The government has bowed down to the financial backers at the cost of the poor landowners. Across the world, polluting and destructive industries are being questioned. Therefore, Europe and America are dumping them in countries like India. Our politicians do not have the  foresight to see we are being made pawns in the hands of foreign investors.

Under the name of progress, all ethical norms have been set aside. Where is the transparency, the will of the people and their welfare? Corruption is rampant, peoples’ opposition is suppressed and democratic rights are nonexistent. Can the people in power, who label activists as traitors and destroyers of development, answer these questions?

Which people is the nation made of? Are farmers, agricultural labourers the 12 balutedars and fishermen not an integral part of the nation? Does the progress of the nation require the destruction of environment and loss of livelihood of lakhs of people? Opening all doors to the corporate loot does not mean development.

The Devendra Fadnavis government has struck off coastal regulations and opened the floodgates of “development” to various industries. This will turn the pristine rivers of the Konkan region into cesspools. On the one hand, it propagates the Clean Ganga mission and the Narmada project.

This double standard is visible elsewhere. On international forums, our ministers formulate plans to reduce global warming. But in our own country, they crush those plans. When in the opposition, they shout from the rooftops about farmers’ rights and land takeover. Quick as they come into power, forget farmers and make laws in favour of financial conglomerates.

One last question. The Shiva Sena helped move the Nanar refinery. But now, the project is going to be established in the Raigad area, to which the party has given its nod. Are the people in Raigad dispensable?

Ulka Mahajan is a social worker and has been fighting for the rights of the Adivasis of Raigad since 1989.