Mr Narendra Modi, Where Is Najeeb?

I have never attended protest gatherings. But on Sunday evening I was ready to because a time comes when every citizen has to rise up and protest in one voice, or be silenced forever.

It’s been four years since a young, underprivileged Muslim student disappeared from a residential university in India, reportedly after a squabble with some right-wing students. His story had faded from public memory. We don’t talk about Najeeb Ahmed anymore. But the fresh state-sponsored crackdown on Indian universities and police brutality on student protests over the past few days is reason enough for us to start asking about Najeeb again.

On the evening of December 15, I stood among a sea of young faces, eager, fearful, apprehensive, angry, distressed, resolutely chanting “We will not be defeated,” “Long live student unity”, as a wall of police officers pushed against them hard, to make them disperse. Suddenly, two cold and clammy hands gripped mine. I looked around to see two young girls, barely 16, or maybe 17; their faces pale, tensed, hanging onto me.

It is not easy facing off a wall of police officers in riot gear when you are merely pretending to adult. As their grip tightened on my wrist, I turned to the two girls, and asked gently, “Would you like me to take you out of here?” They hesitated and then nodded. No. “Can we hold your hand?” I looked at them, held their hands tighter. I thought of Najeeb on that cold, December Sunday evening, as the crowd of agitated young men and women swelled around me, as I have thought of him almost every day since he went missing in 2016.

I didn’t know Najeeb personally. But the fact that a young man from a minority community, studying at one of India’s most elite universities, should go missing in a democratic country and stay missing for four years despite wide outcry was a huge red flag that we conveniently ignored. Earlier on Sunday morning, as video and audio with pleas for help  from students of two Muslim majority universities –  Jamia Millia Islamia and  Aligarh Muslim University – poured in my inbox, my heart ran cold and I thought of Najeeb again.

Over the last few weeks, India has been burning over the implementation of the National Register of Citizens – that has already left out lakhs of people, including Hindus and Muslims, in Assam in northeast India, and the Citizenship Amendment Act, which aims to provide citizenship to all non-Muslim refugees but consciously excludes any Muslims who are also victims of persecution in their countries.

On December 15, the Delhi police – which reports to the Union home minister Amit Shah as Delhi is a Union territory – stormed into the Jamia Millia campus, locked it down and beat up students to quell protests over the register and the CAA. In visuals posted on social media by Jamia students, utter chaos and mayhem was evident. The police ransacked university property, beat up and manhandled students studying in the library, including women students.

There were reports of at least two bullet injuries. Later that evening, the police cracked down on another Muslim majority university in Uttar Pradesh – another BJP-ruled state. AMU students posted visuals and frightened appeals on social media alleging that the police had torched their rooms. The police were also seen destroying student bikes in a parking lot in the university campus.

In  2017, students at Najeeb’s alma mater, the elite Jawaharlal Nehru University (known popularly as JNU) – a left-liberal bastion – had organised a protest over the 2013 hanging of Afzal Guru, who was convicted for his role in the 2001 parliament attack. Several students were arrested on charges of sedition. They were accused of raising “anti-India” slogans by the Akhil Vidyarthi Parishad (ABVP), the student wing of the Rashtriya Swayamsevak Sangh (RSS), the ideological parent of the BJP and Prime Minister Narendra Modi. 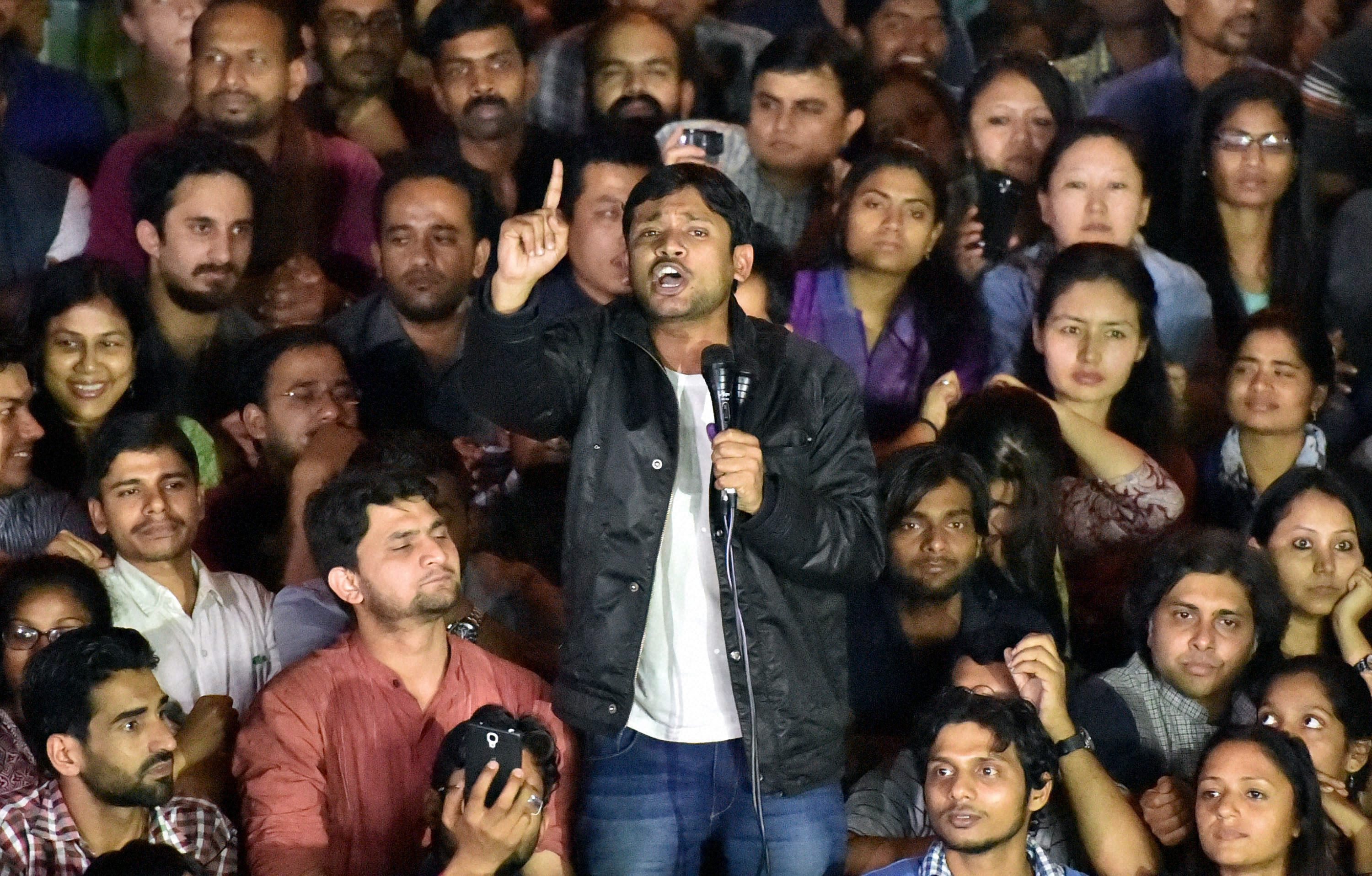 Najeeb reportedly had an altercation with ABVP members before he went missing. In 2017 also, protests had erupted in a Delhi University college where the ABVP had forced the authorities to cancel a seminar on the culture of protest, because JNU student leaders Umar Khalid and Shehla Rashid, both of whom played a key role in the 2016 JNU protests, were among the speakers. Over the last few days, students had alleged that ABVP members were working alongside the police to manhandle protesting students.

The crackdown on dissent in Indian campuses began in 2016. The BJP’s IT cell has consistently used doctored videos and fake news to run  smear campaigns against universities and student leaders. The ABVP has run riot on campuses, threatening and bullying dissenting students. The latest crackdown on Jamia and AMU is merely the culmination of that process.

Students have, and are still, standing between India’s democracy and Modi’s dream of transforming India into a ‘Hindu Rashtra’ where Muslims will be even more marginalised than they already are. In Gujarat, where following a state-sponsored pogrom against Muslims in 2002 when Modi was the chief minister of the state, Muslims live a largely ghettoised life.

In 2009, Modi’s government amended a unique law – the Disturbed Areas Act (1991) – that restricted Muslims and Hindus from selling property to each other in “sensitive” areas, to give local officials more power in property sales. They also extended the reach of the law. The law that was aimed at apparently protecting the Muslims is in fact now used to ghettoise them. On Monday,  Modi called the protests disturbing and urged the country not to allow vested interests to divide the country. Just a day earlier, at a rally, in his characteristic dog-whistle politics, he had said the protesters “can be identified by their clothes,” a clear reference to the distinctive clothes of the Muslim community (skullcaps and hijabs).

Protestors hold placards as they raise slogans during a demonstration against the Citizenship (Amendment) Act, at Mandi House, in New Delhi, Thursday, December 19, 2019. Photo: PTI/Ravi Choudhary

On the evening of December 15, I had found myself at a demonstration protesting police brutality on Jamia and AMU students, not as a reporter but as a protester. I have never been a protester. I have never attended protest gatherings or rallies. I have never stood out in the cold, shouting slogans of freedom and liberty and unity, pushing back against police officers to stop them from trampling over kids, ready to be arrested, beaten up, thrown into jail.

But on Sunday evening I was ready to do all of that because a time comes in the destiny of every country where every citizen has to rise up and protest in one voice, or be silenced forever. In India, that time is now. And for my generation, this is our last chance to break out of the constant fear of losing it all that stalks most of us – the fear of losing our jobs, money, social standing, the fear of physical harm – and be part of that one last rebellion. The youth is leading the fight. All we really need to do is show up. Have their back. Amplify their voices.

We didn’t protest enough for Najeeb. We didn’t come out on the streets in large enough numbers. We ignored what Najeeb’s disappearance signified. Najeeb is, and should be, the face of this people’s movement. And this time, let’s ask with more force, Mr Modi, where is Najeeb?