The indiscriminate killing of the civilians in Mon is feared to affect the ongoing Naga peace process with the Union government.

Locals at a ceremony to pay last tributes to the 13 people who were killed by armed forces, in Mon district, Monday, December 6, 2021. Photo: PTI

New Delhi: Hours before Union home minister Amit Shah made a statement in parliament this afternoon on the blundered ambush by an Indian Army unit in Nagaland on December 4, the death toll of civilians from the counter-insurgency incident and its fallout rose to 15, as per local news reports.

According to a report in The Morung Express, though the state government’s statement issued on December 5 evening had put the death toll of civilians at 13, the figure had risen to 15 by that time as “two more reportedly succumbed to their injuries after alleged firing by security forces during an ‘operation’ in Oting under Tizit sub-division of Mon district on December 4.”

A bandh has been called in Mon on Monday by the Eastern Naga People’s Organisation, the apex body of Nagas in the Mon area. The Naga Students Federation too has called for a six-hour bandh in all Naga-inhabited areas of the region.

Early on December 4 evening, a contingent of the army’s counter-insurgency unit, 21 Para Special Forces, killed six civilians and injured two others – all residents of Oting village in the state’s Mon district bordering Myanmar – while they were returning home in a pick-up van after working at a coal mine. The security forces apparently ‘mistook’ them for militants. According to a statement issued by Dimapur-based 3 Corps of the army, the unit was on a counter-insurgency operation in the area following a tip-off on the likely movement of militants belonging to the NSCN (Khaplang).

On December 4 itself, seven other civilians died after they were shot by that unit at Oting a little after the first incident. Two persons succumbed to their injuries from that shooting on December 5.

According to BJP Mon district head Nyawang Konyak, on December 4 evening, on being informed by villagers that firing was ongoing on the Oting-Tiru road and six people from his village were dead, he rushed towards the spot. While he was enquiring about it in a shed nearby, security personnel shot at his vehicle in spite of his party flag on the bonnet. Konyak said all the three persons accompanying him received bullet injuries. One of them, his neighbour, died later. By the time Konyak had reached the spot, several villagers had also arrived on hearing about the firing. Several of them were also fired upon, killing at least seven of them and injuring six others.

Konyak claimed to Hornbill TV on December 5, “We were fired upon because the Army unit was dressing up the crime. We found the pick up van full of blood and empty. We then saw that clothes from all the bodies were removed, and security personnel were trying to put on them khaki clothes. That’s the reason we were fired at.”

The aftermath of the December 4 killings and injuries to civilians had led to eruption of violent clashes in Mon on December 5, resulting in two more death of civilians. On December 5 afternoon, a 1,000-strong angry group set on fire a portion of the Assam Rifles camp situated behind the superintendent of police’s office in Mon town, and also vandalised the Konyak Union office located nearby. Several civilians were injured in the firing by the security forces in that incident too. 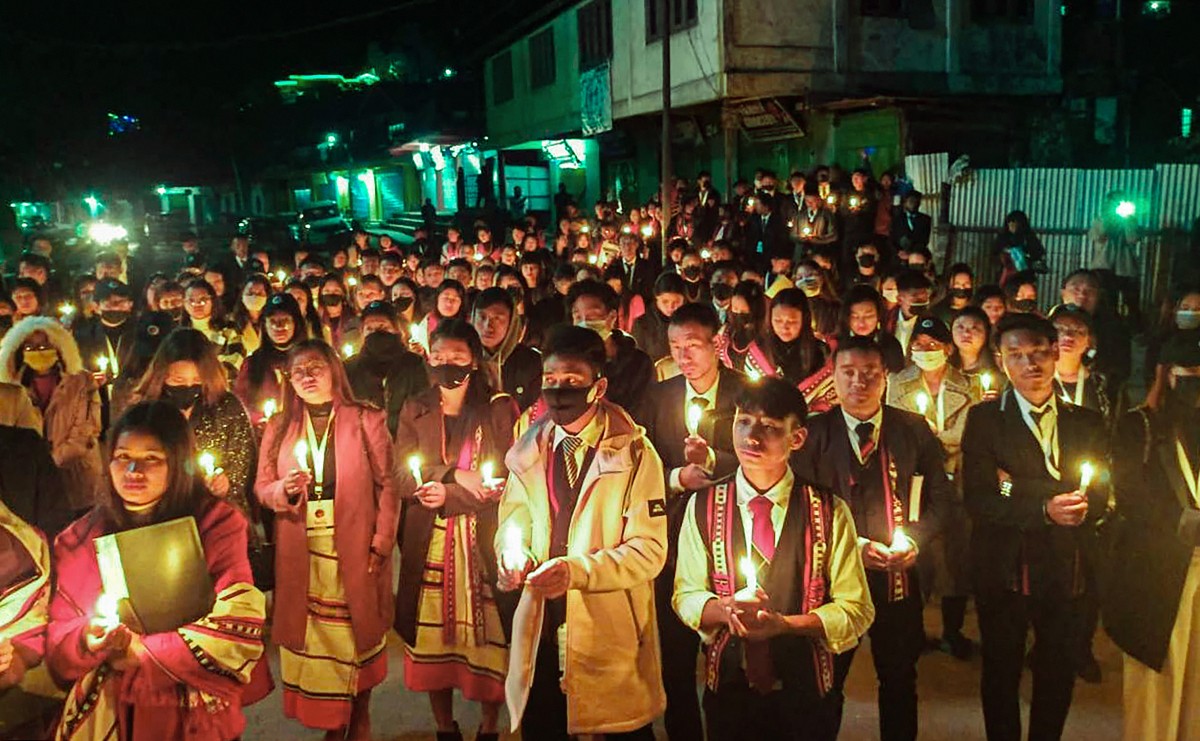 Locals participate in a candle march over civilians who were killed by the armed forces, in Mon district, Sunday night, December 5, 2021. Photo: PTI

State chief minister Neiphu Rio, who had set up a five-member special investigation team (SIT) on December 5 under the supervision of ADGP (law and order) Sandeep Tamgade, is set to visit Mon on December 6 to attend the funeral of those killed.

The indiscriminate killing of the civilians in Mon is feared to affect the ongoing Naga peace process with the Union government. The Mon area is essentially a belt populated by Konyak Nagas who have been resisting the NSCN (Isak-Muivah)’s claim to be the only decision-makers at the peace talks.

Though the framework agreement was signed by the Centre with NSCN (I-M), former interlocutor for the talks R.N. Ravi soon brought in the NNPGs (Naga National Political Groups) too to the peace talks. The Konyak tribe forms a formidable part of the NNPGs. In course of time he could create through the NNPGs a part within the Nagas who was not on the same page as the NSCN (I-M) on, say, its demand for a separate flag and a constitution. It is only in the Konyak areas that NSCN (I-M) has not been able to entrench itself.

According to some New Delhi-based reports quoting Ministry of Home Affairs sources, Ravi, now the Tamil Nadu governor, had rushed to Delhi from Chennai on December 5 to take part in an emergency meeting on how to ensure that the peace talks wouldn’t suffer after the December 4 incident that killed civilians belonging to the Konyak tribe.

NNPG convenor N. Kithovi Zhimomi, in a statement on December 5, had already stated, “At a time when people of Nagaland are wanting and yearning for peace, such incident has deeply hurt the sentiments of the peace loving citizens of Nagaland.” According to The Hindu, the Centre has reached out to the NNPGs and NSCN (I-M) “to assuage the situation”.

Ravi was removed from the post of interlocutor and moved out of the state Raj Bhavan in order to give the final push to the peace talks that are yet to see an accord since 2015. Retired Intelligence Bureau special director A.K. Mishra was brought in to replace him.

In a statement, NSCN (I-M) had said that the killing of the unarmed civilians “cannot be justified in any manner in this part of the civilised world where the Indo-Naga peace process has seen much progress”.

Post the December 4 incident, a rare sense of unity was seen among all Naga tribes in solidarity with the death of the people from the Konyak tribe. Several of them walked out of the ongoing annual Hornbill festival hosted by the state government near Kohima and raised black flags in protest of the killings. Others had come out to the streets in Dimapur to join in candle light marches. The common ground for solidarity is seen to be New Delhi spilling Naga blood, a reminder of the operations in the 1950s and the 1960s.

An NNPG statement on December 5 highlighted the point, “The working committee of the NNPGs recall genocides committed by Indian armed forces at Matikhru village in Pochury country on September 6, 1960; Mokokchung town in Ao country on December 27, 1994, etc. The pattern of cowardice by Indian security forces is clearly exhibited yet again.”

The gruesome killing of the unarmed civilians by the army’s counter-insurgency unit has, once again, led to the demand within the Naga society for removal of the Armed Forces (Special Powers) Act – AFSPA – from the northeastern state as it gives considerable immunity to the security forces in disturbed areas.

NNPG convenor Zhimovi too categorically called for its removal on December 5. “Such act of killing of innocent lives is condemnable to the highest sense and should be condemned by all. The government should also revoke AFSPA and remove Disturbed Areas Act from the state of Nagaland.”

In a press statement on December 5, the influential civil society group, Naga Mothers Association, stated, “We demand that the state government takes cognisance of these repeated violations of human rights under AFSPA and move for lifting AFSPA and strongly recommend for its repeal, as we stand on the threshold of peace.”

Aside from a number of civil society organisations putting up such a demand on December 5, several student bodies too demanded removal of AFSPA from the state.