Why Hindutva's Dark Fantasy About India's Muslims Could Become Real

Without any evidence, India’s Muslims were labelled anti-Hindu and religiously radical since 2014. But the next five years may result in the materialisation of a self-fulfilling prophecy. 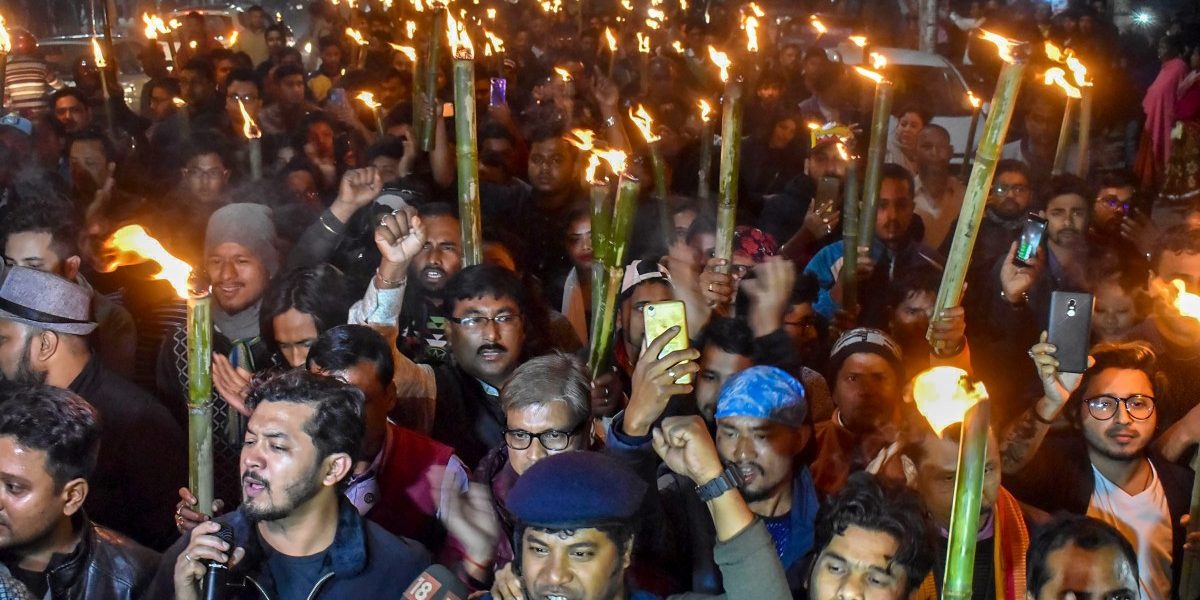 A protest against the Citizenship Bill in Guwahati. Credit: PTI

In 1948, American sociologist Robert K. Merton propounded the theory of self-fulfilling prophecies. This is the lens through which the Muslim community’s apprehension of having to negotiate the rule of Prime Minister Narendra Modi for another five years needs to be seen. “The self-fulfilling prophecy is, in the beginning,” Merton wrote, “a false definition of the situation evoking a new behaviour which makes the original false conception come true.”

India’s Muslims were tagged as anti-Hindu and religiously radical during Modi’s first term as prime minister, with barely any evidence to justify the labels. They now fear that some among them might make choices that will bring to reality the “false definition” of their community.

This will, in turn, take India to the next stage in Merton’s paradigm. “This specious validity of the self-fulfilling prophecy,” he wrote, “perpetuates a reign of error. For  the prophet will cite the actual course of events as proof that he was right from the very beginning—such are the perversities of social logic.”

Yet the thought of the “reign of error” emerging in India has had Muslim commentators beseech Muslims to not abandon hope. In doing so, they recognise, even though subliminally, that hope in the Muslim community is hanging by a thread.

Also Read: Is It Still Possible To Strive For Yet Another India?

This is quite understandable. In the last five years, 44 Muslims were lynched in the name of the cow, inter-faith couples were harassed, threats were issued to convert the religious minorities to Hinduism, history books rewritten to demonise Muslim rulers, and cities were renamed to efface all past Muslim association. Not only that, an attempt was made to redefine the secular basis of Indian citizenship, evident from the framing of the Citizenship Amendment Bill. The othering of Muslims became an everyday phenomenon.

It is a testament to the forbearance of ordinary Muslims that they did not take to the streets in response to these outright provocations. Perhaps they were petrified of the state, an increasingly Hinduised one, coming down hard on them. Or maybe they hoped they could combine with those Hindus who are opposed to Hindutva and vote the BJP out of power in 2019.

The sheer magnitude of Modi’s victory

This hope of Muslims has been shattered not just because Modi has won a second term as prime minister, but because of the sheer magnitude of his victory. For all the misery his policies have inflicted on the people, the BJP increased its seats from 282 in 2014 to 303 in 2019 and its vote-share climbed from 31% to 37.5%.  These figures have been widely accepted as evidence of the growing allure among a section 0f  Hindus for Hindutva, which is anchored in demonising Muslims to consolidate the majority community.

That is why the hope of Muslims has segued into apprehension about the future. This emotion will be bolstered as Modi and the BJP resort to polarisation in their quest to win the next few assembly elections. Besides, there are enough contentious issues pending from Modi’s first term – the Ayodhya dispute, the criminalisation of triple talaq and the finalisation of the National Register for Citizens in Assam.

There is very little to suggest that the BJP’s mammoth victory has appeased those Hindus who harbour untenable grievances, both historical and contemporary. In the week the election results were announced there were instances of Hindutva bullies enacting their darkled fantasies about Muslims in Madhya Pradesh, Haryana and Bihar.

All such actions in the future will be justified, as were those in the past, on the basis of a false definition of Muslims as being disrespectful of Hindus, their inexplicable religiosity and radicalism, their innate disloyalty to the nation, their propensity for violence. These actions will engender fear among Muslims, who will search for coping mechanisms.

Actions arising from this false definition of Muslims will drive some among them to adopt, as Merton predicted, a new form of behaviour.

An upsurge in lynchings and hate crimes was reported over the past five years. Credit: Reuters

Many among the thin crust of middle class Muslims will explore the option of going abroad. Those working in the Middle East, which does not grant citizenship rights to expatriates, will push westward – to Canada, for instance. There will be knee-jerk reactions, such as a friend’s friend, married to a Hindu, thinking about renaming her child to erase all traces of his Muslimness in the wake of the BJP’s victory. Mostly, though, middle class Muslims will draw succour from their cosmopolitan bubble, stung occasionally by some of their friends engaging in Hindutva stereotyping of their community.

Yet a uniformity of responses will unite Muslims across class and caste. More than ever before, Muslims will ascribe every job or promotion denied or layoff to the socio-cultural ambience fostered by Hindutva’s increasing domination.  They will find it challenging to explain to their children the hatred directed against them.

Also Read: The Metaphors in Modi’s Victory Speech Give a Peek Into His Plans for ‘New India’

The new form of behaviour occasioned by the false definition of Muslims will express itself in other ways as well – the massive mandate that the BJP has won will strengthen all those community leaders who never tire of reminding Muslims about the chasm existing between them and the others. Many Muslims will be tempted to turn inwards, to their religion and institutions. Some will be nudged by their discontent to seek a channel of expression; they will become increasingly susceptible to radicalisation, to a politics focused on identity and on the idea of matching the stridency of Hindutva hotheads. Some will sport the markers of identity to indulge in a symbolic display of assertion and fearlessness.

The working of Merton’s self-fulfilling prophecy is best illustrated through a cousin’s story of his college days in Ara, Bihar. In the 1980s and early 1990s, every time India beat Pakistan, his Hindu classmates would tease their Muslim counterparts with remarks such as, ‘Why are you all so sad? Better luck next time.” When Pakistan beat India, they would be asked whether they burst crackers and distributed sweets. Their avowals to the contrary were dismissed outright. The cousin said those taunts led to some of his Muslim friends supporting Pakistan until they passed out of college.

Indeed, the stereotyping of Muslims as inveterate and implacable opponents of Hindus is as old as the national movement. Yet, the self-fulfilling prophecy never acquired such sinister tones as it did after 2014 because there were important national leaders who challenged the “false definition of the situation.” Mahatma Gandhi opposed it, as did Jawaharlal Nehru, through state policies he pursued as India’s first prime minister. Subsequently, a chain of leaders carried forward the Nehruvian tradition.

This false definition of Muslims, however, has taken deep root over the last five years largely because it has received the ruling party’s support. That is why the media headlined, presumably in relief, what Modi told the newly elected National Democratic Alliance MPs last Sunday: “Minorities have been deceived in the country through an imaginary fear created for the purpose of votebank politics. We have to pierce through this deception. We have to gain trust.”

That a prime minister who has resorted to communal rhetoric and polarisation before every state assembly poll and the recent Lok Sabha election should describe the fear of religious minorities as imaginary boggles the mind. Denied even the authenticity of their fear, the Muslims will likely get trapped in the unfolding of what Merton called “the perversity of social logic.”