The Muslim Muk Morcha, a protest by over a lakh Muslims in Pune on September 9 represented an important mobilisation of the community. But some are sceptical if it will have a favourable outcome. 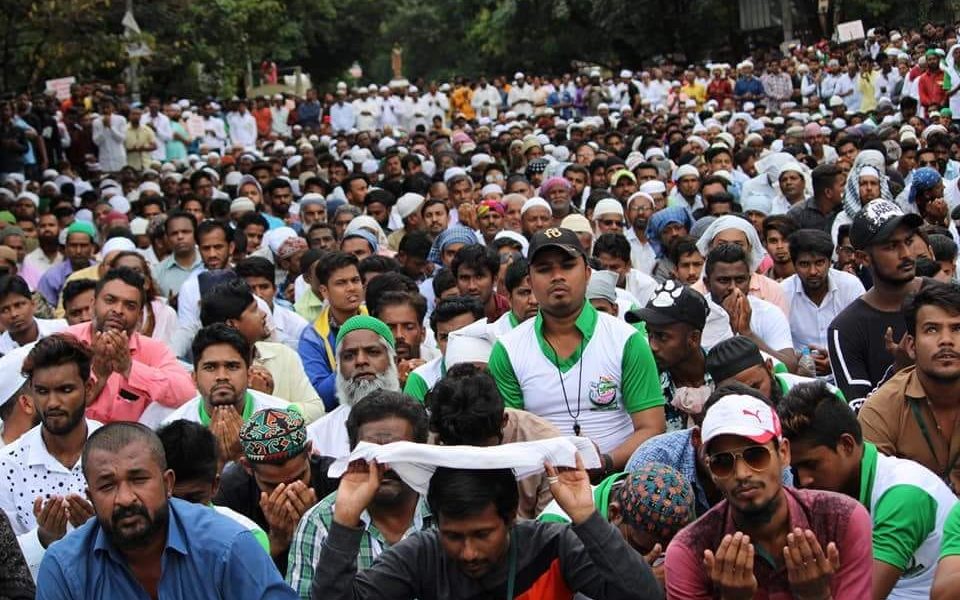 Pune: The Muslim Muk Morcha, a peaceful protest by over a lakh Muslims on the streets of Pune on September 9 represented an important mobilisation of the community. Beginning at Golibar Maidan at 11:30 am and culminating at the Collector’s office at 2:45 pm with the handing over of a letter containing their demands, this outpouring of Muslims on the streets of Pune attempted to bring attention to issues facing their community in recent times.

The demands of the Muslim Muk Morcha include asking for 5% reservation in education and employment to be made available to Muslims in Maharashtra, punishment for those behind the lynchings of Muslims across the country in the name of ‘gau raksha’, the amendment of the Atrocities Act to ensure the safety of Muslims and the return of Waqf lands that had been illegally encroached upon or snatched.

Pune’s Muslim Muk Morcha event was preceded in 2018 by a series of ‘Tahaffuz-e-Shariat’ public marches and meetings organised across the country by the AIMPLB and many Muslim organisations, covering towns across Maharashtra in March-April protesting the provisions of the Triple Talaq Bill. Muslims have questioned the provisions of this Bill as an interference in the community’s own ability to provide redress to women unfairly targeted by the practice of talaq-e-biddat, and an infringement of Muslims’ cultural rights as guaranteed by Article 25 of the Constitution.

The Tahaffuz-e-Shariat meeting in Pune on March 10 saw around 25,000 Muslim women in burqas take to the streets. Another mass congregation of Muslims that had made news in Maharashtra this year was the three-day Ijtema of the Tablighi Jamaat at a village near Aurangabad in February 2018 that drew lakhs from the state as well as other parts of the country. This huge gathering was of a religious nature, inviting Muslims to reflect on matters of their faith and its true practice.

What drew 1.25 lakh Muslim residents of Pune on the streets on September 9, however, were not cultural, spiritual or religious matters, but issues of survival.

Anjum Inamdar is the president of the Moolnivasi Muslim Manch and a member of the coordination committee of the Muslim Muk Morcha. A veteran social worker and activist, he described the Morcha as an inevitable development in today’s circumstances. “The struggle for reservations for Muslims in education and employment is over three decades old in Maharashtra, with many groups and organisations at the grassroots level committed to this demand,” he said. 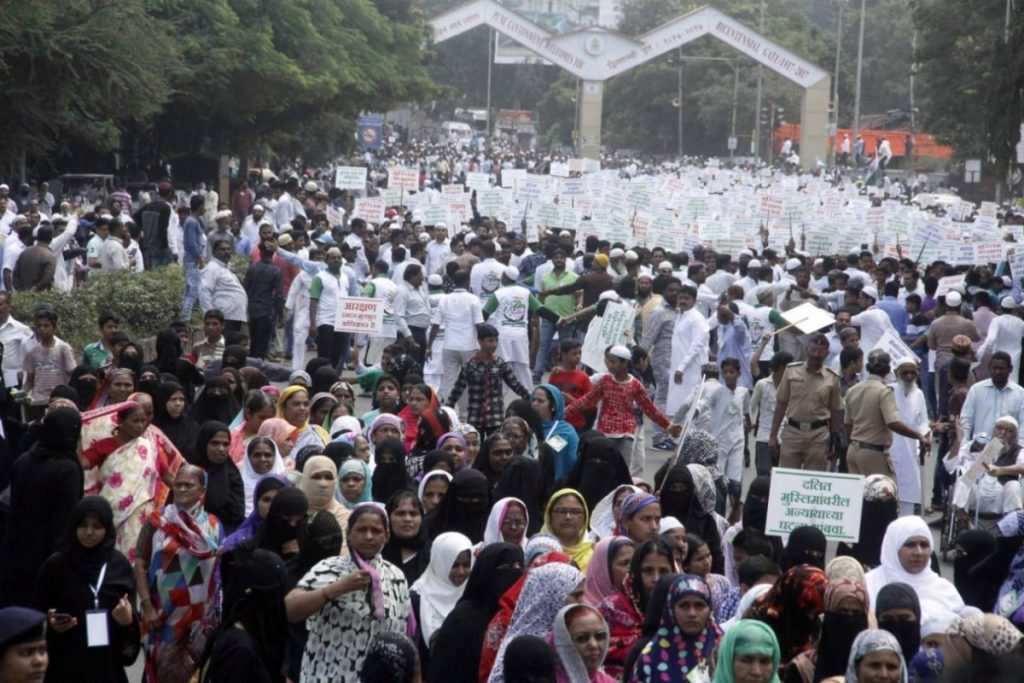 About 1.25 lakh people participated in the event in Pune on September 9. Credit: Zuber Memon

“Levels of education among Muslims are low, many of them struggle in extremely poor conditions. After the Central government had appointed the Sachar Committee in 2006, Indian society was forced to acknowledge the social reality of Muslims being backward and this gave thrust and urgency to our long-standing demand. It was because of this that Prithviraj Chavan brought in an ordinance for 5% reservation for Muslims in June 2014. This should have been regularised and introduced as a Bill before it lapsed. But the Fadnavis government had come in by October 2014, and what can be expected of them? They allowed the ordinance to lapse and have capped the reservations in Maharashtra at 52%, ignoring the social and economic reality.”

In fact, the lapsing of reservation to the Muslim community after a year, which had begun to be extended from June 2014, was not a mere oversight, but a deliberate matter of the BJP’s anti-reservation stand, according to some observers. Rafiq Pathan, a Nashik-based businessman, put this very clearly when he said, “What was the beef ban all about? In my opinion, it was not a very big issue for Muslims, but a small one. Cow slaughter is certainly not a matter of life and death. What the beef ban achieved, being announced so soon after the Fadnavis government took over, was to divert the anger and outrage of Muslims towards the minor issue of beef, while the bigger issue, of the 5% reservation then in place, being allowed to lapse, escaped attention.”

Shrinking employment opportunities and the increasing tendency for agitations demanding reservation to turn violent have contributed to state governments across the country becoming wary of extending reservation to any fresh categories. In Maharashtra, the demand by Marathas for 16% reservation has seen lakhs of Marathas take to the streets in 2017-18.

Anjum Inamdar denies however, that the Muslim Muk Morcha is a competitive campaign to the Maratha mobilisation. “We are not asking for the 5% to be given to us by cutting any other community’s share. Marathas have raised the demand for 16% based on their share of the population, and ours is raised similarly. In fact, their community has supported our demand and many of their groups had even turned out for the Morcha,” he says.

Sensing the political importance of the demand as the country inches closer to a general election, Shiv Sena chief Uddhav Thackeray also voiced support for 5% reservation for Muslims in education in August 2018. In February 2018, trying to carve out some support among Muslims in the context of their complicated relationship with the BJP, Shiv Sena cadres had worked as volunteers during the Ijtema at Aurangabad.

The Muslim Muk Morcha achieved its objective of a peaceful show of protest on the streets of Pune, closely watched by the very same police who have foisted cases on civil rights campaigners and activists across the country after the Elgar Parishad was held here on December 31, 2017. No political personality made a speech or shared the dais on the day of the protest. Women were at the forefront of this morcha, just as they were during the Maratha protests in the recent past.

Meanwhile, another group calling itself the Muslim Kranti Morcha with Samajwadi Party MLA Abu Azmi among its members, also came together in August in Mumbai to press for 10% reservations for Muslims. These are separate initiatives, but represent a growing discontent and a need to mobilise to express this discontent.

However, not all agree that mass showings like the Muk Morcha will achieve their objectives. “I feel sceptical about these events because I wonder about their output for the community today. Yes, the community should have a voice and speak about these issues, but how will their protest be painted?” asks Sarfaraz Ahmed, a researcher and activist from Solapur. “In fact, this is a step taken as a reaction to the Maratha Morchas and will be used to project the Muslim community as a danger to Hindus by Hindutva groups.”

Syed Zabiullah, a reporter and photographer from Hyderabad who regularly covers political events, tends to agree. “In today’s social and political climate, there is little chance of the government heeding any of the demands raised in such a morcha. Whatever be the demands of such a demonstration, the messages that will be floated on WhatsApp and social media will be used to increase the insecurity of the majority and polarise communities further as we move closer to the elections. The optics of mass protest by Muslims can be used to invoke mass reactions by the majority.”

These are genuine fears, but they cannot take away from the fact that reservation for Muslims, like for other backward communities, will remain a challenge of society’s commitment to social justice and Constitutional obligations for some time to come. Till then, communities will find ways to mobilise and protest, whether or not it is convenient in the political climate of the moment.

Scharada Dubey is the author of Portraits from Ayodhya: Living India’s Contradictions (2011).