Though he mocked the Rashtriya Swayamsevak Sangh over 12 activists at its Jabalpur office testing positive for corona, the police have charged him with deliberately insulting religious beliefs. 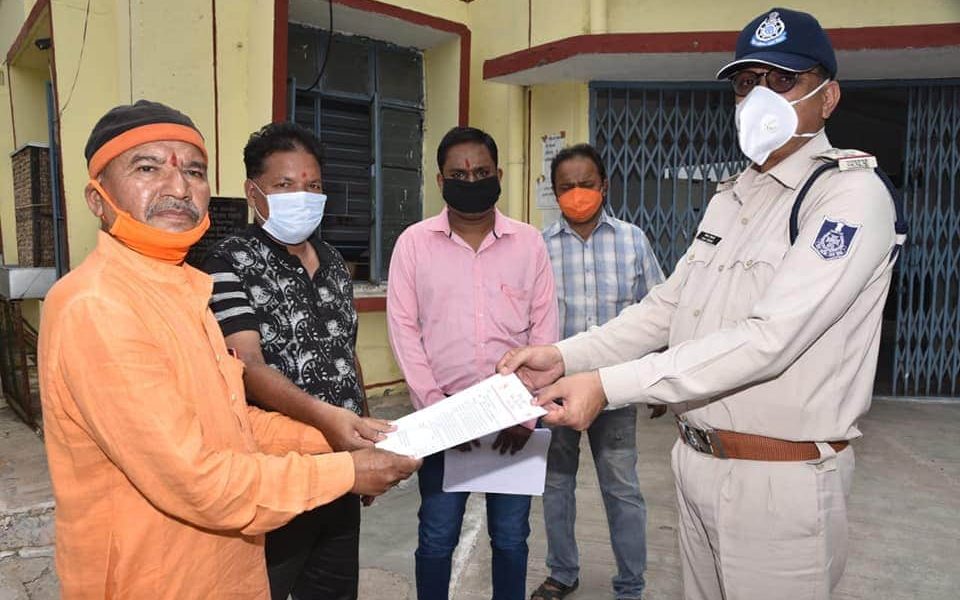 Bhopal: At the height of the media hysteria over the emergence of coronavirus infections at the Nizamuddin centre of the Tablighi Jamaat in Delhi, the wrestler-turned-BJP politician Babita Phogat took to Twitter to call the Jamaatis ‘ignorant pigs’ (jaahil suar). But when a young Muslim man in Jabalpur used the same term – suar – for the dozen or so activists of the Rashtriya Swayamsevak Sangh who had contracted COVID-19 at the RSS office in the city, he ended up in jail with the police slapping serious charges of promoting religious hatred on him.

On July 20, the Jabalpur police booked  Ziya-ul-Haq –  a 23-year-old resident of Mansurabad Gohalpur of Jabalpur district and final year student of B. Pharm. at the Rani Durgavati Vishwavidyalaya – under section 295 (A) (‘Deliberate and malicious acts, intended to outrage religious feelings of any class by insulting its religion or religious beliefs’) and 505 (‘Statements conducing to public mischief’) of the Indian Penal Code and immediately arrested him.

The RSS is the parent body of the Bharatiya Janata Party, now in power in Madhya Pradesh, and of course at the Centre. 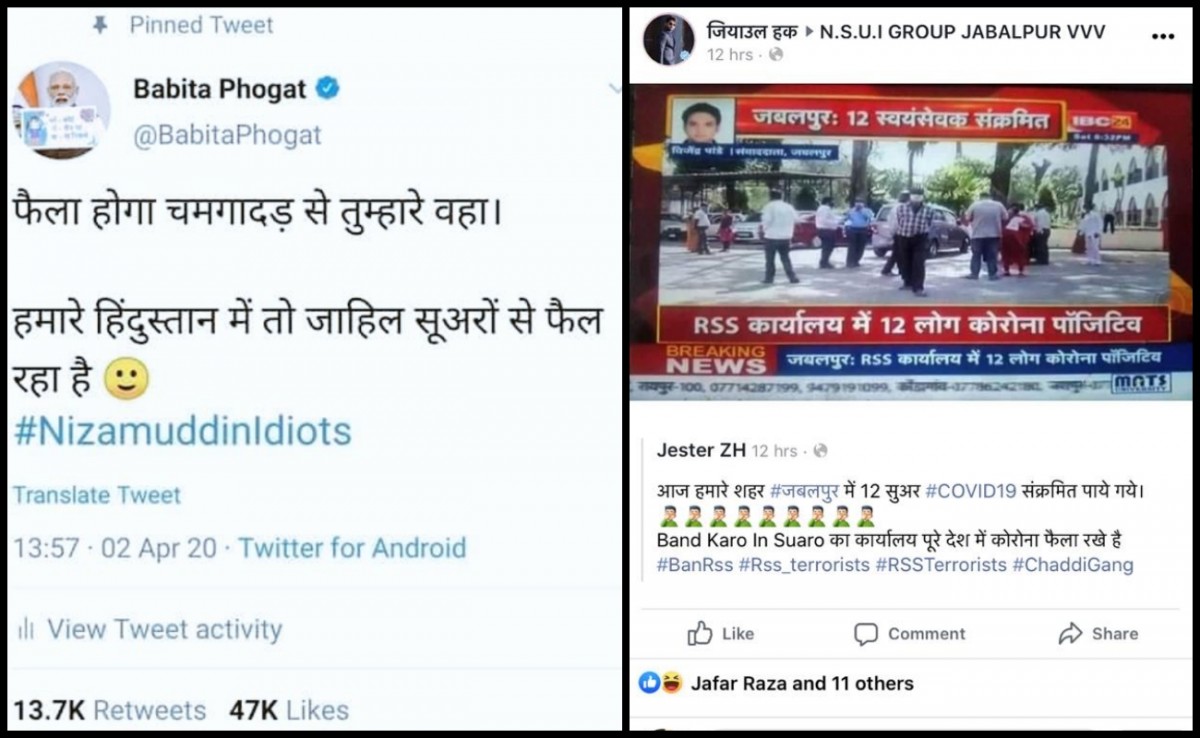 (Left) Screenshot of Babita Phogat’s tweet from April 2, 2020, now deleted: ‘Bats may have spread it in your country. In India it is being spread by ignorant pigs. #NizamuddinIdiots”. (Right) Ziya-ul-Haq’s Facebook post of July 19, 2020: “12 pigs have been tested corona positive in our city today. Close the offices of these pigs, they are spreading corona across the country.”

Hours after the news of 12 RSS men testing positive for the coronavirus at the Jabalpur Sangh office broke on July 19, Ziya-ul-Haq took a dig at organisation on the Facebook page of ‘NSUI Group Jabalpur VVV’. NSUI is the student wing of the Congress party.

Sharing a screenshot of the news from a local TV News channel, he wrote ‘Aaj hamare shahar me 12 suar corona sankaramit paye gai. Bund karo in suaro ka karyalay pure desh me Corona phaila rahe hai’ (12 pigs have tested corona positive in our city today. Close the offices of these pigs, they are spreading corona across the country).

Angered by the Facebook post, RSS activists and members of the right-wing Hindu Dharm Sena,  reported the matter to the Jabalpur Cantonment police station the following day.

Based on the complaint of Neeraj Rajput, state vice president, Hindu Dharm Sena, who also described himself as an RSS worker, the Jabalpur police registered a case against Ziya-ul-Haq for insulting the religious beliefs of a group.

The complainant in the FIR alleged that Haq made “indecent”, “shameful”, and “intolerable” statements against RSS members. He went on to emphasise that such statements against a “nationalist organisation” by a “Muslim youth” can jeopardise social harmony. “The RSS is a patriotic and social work organisation, and has crores of members in this country. The Muslim man’s indecent reference to such an organisation can endanger social harmony. The abusive reference made by the man has hurt my feelings of  nationalist and social service,” the complainant said in the FIR.  He warned the police to take immediate legal action against the “Muslim youth” and arrest him, failing which, he said, “an angry protest movement will be organised”.

Interestingly, even though Rajput’s allegation is that the “Muslim youth” has maligned the image of the RSS and its members, the police have registered a case under section 295 (a) of the IPC – of deliberately insulting the religion or religious beliefs of a group.

Confirming these sections, town inspector of Jabalpur Cantonment Police Station Vijay Tiwari said, “He has been booked under sections 295 (A) and 505 of the IPC for making derogatory remarks against the RSS and sent to jail.” 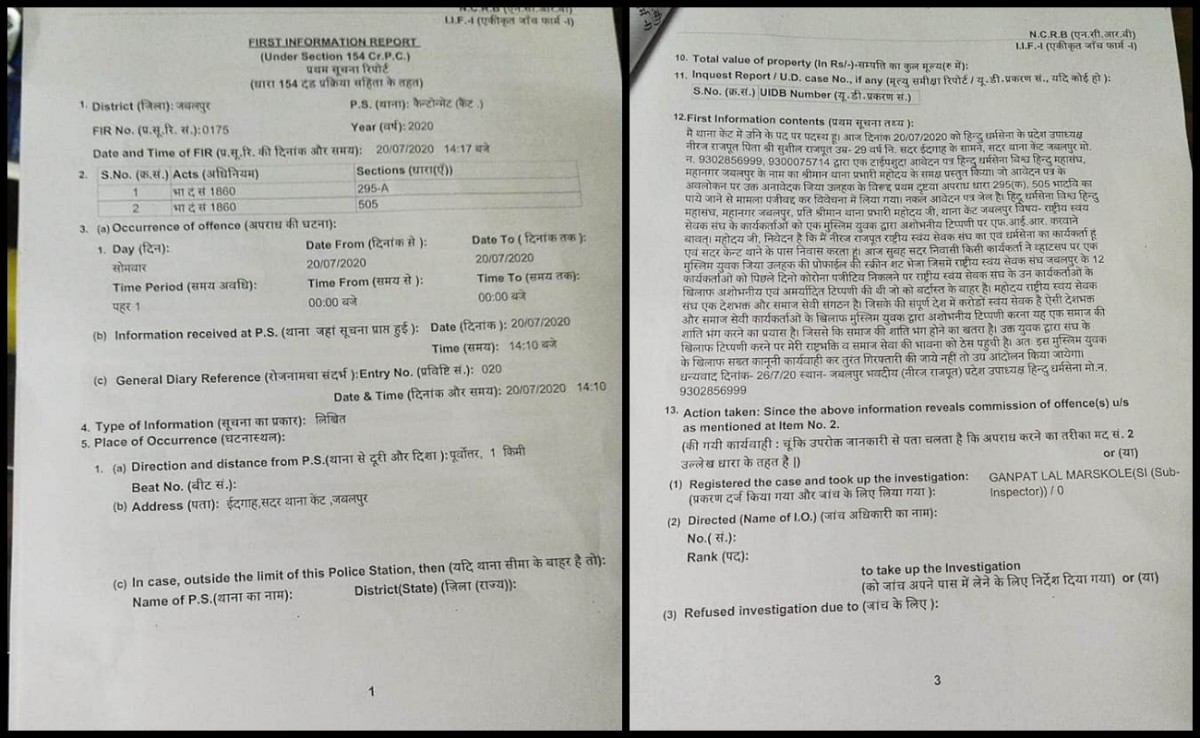 FIR filed by the Jabalpur police against Ziya-ul-Haq on July 20, 2020.

When asked why Ziya-ul-Haq has been booked for insulting religious beliefs when the allegation is that of defamation, Tiwari disconnected the call. Likewise, when the same question was put to the superintendent of police, Jabalpur, Siddharth Bahuguna, he refused to make any comment and advised The Wire to speak to his subordinates.

Justifying the police action, however, Sanjeev Uikey, ASP, Jabalpur said, “Indeed the RSS is not a religious institution but if a Muslim youth calls the RSS and its workers ‘suar‘ and it offends them and they demand action, the police have to book the youth for insulting religious beliefs. Now, the matter is before the court.”

Interestingly, when Ziya-ul-Haq’s advocate, Vikash Rathour, filed for bail before the Jabalpur judicial magistrate first class court on July 21, the court denied bail claiming the crime to be serious and sent him to police custody till July 24.

Madhya Pradesh high court advocate Nayeem Khan, who is now defending  Ziya-ul-Haq, said the matter at best pertained to defamation and not hurting anyone’s religious beliefs. “The previous advocate did not defend the case properly. Hence, the case will fall flat in the next hearing which is on July 24,” he said.