Behind Mounting Muslim Protests, a Yearning to be Heard by the State Gone Deaf

Widespread protests against the lynching of Tabrez Ansari, which mostly failed to draw support from non-Muslims, mark a failure at the political, social and judicial levels. 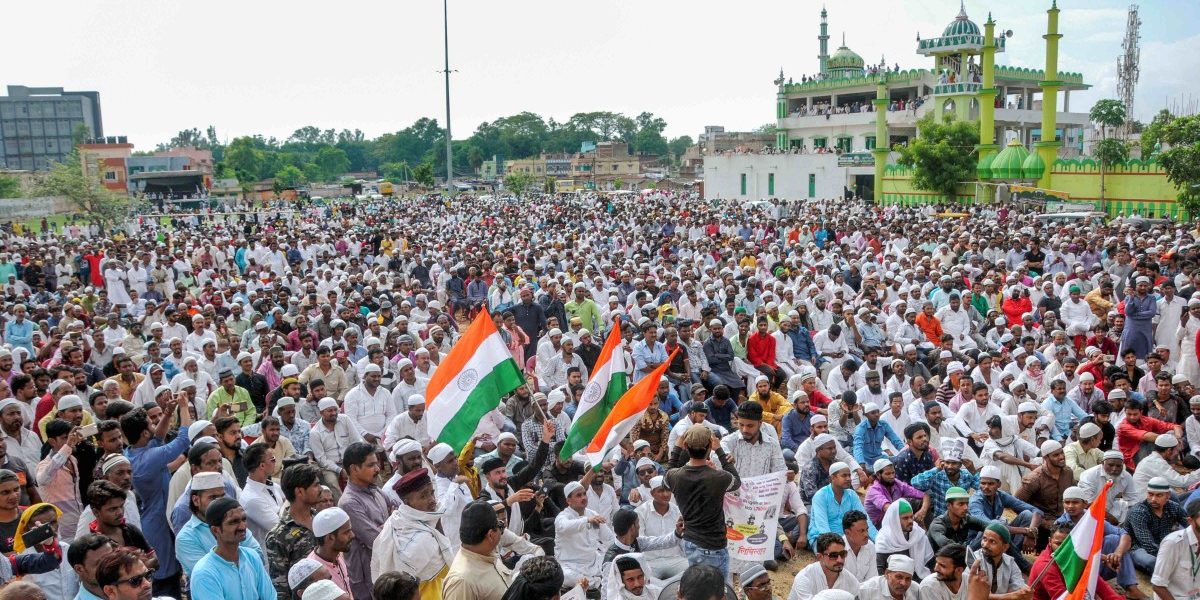 Muslims protest against the lynching of Tabrez Ansari in Ranchi, July 5. Photo: PTI

The lynching of Tabrez Ansari in Jharkhand has acquired multiple meanings for Muslims. His death has come to symbolise the trauma of Muslims at the atrocities committed on them and the Indian state’s indifference to their plight. His killing represents to them the futility of reposing faith in non-BJP parties for countering the Hindutva brigade. This in turn has persuaded them of the need to express their anger and demand the enforcement of their constitutional rights.

Protests against the lynching of Ansari have been far more widespread than the impression conveyed by the media, which has either focussed on those in which the participation of people was extraordinarily high, such as the one in Malegaon, or those that sparked off communal tension or led to police action, such as in Meerut and Agra in Uttar Pradesh and Surat in Gujarat. In Ranchi, Jharkhand, an anti-lynching protest triggered an incident of confrontation between Hindus and Muslims, but did not spiral out of control.

I spoke to four people who were among the key organisers of protests at four different places. Three features were common to their narratives, though differing in nuances. One, the protests were organised under local pressure. These were not coordinated by a national organisation, whether political or socio-religious in orientation. Two, attempts to ensure participation of Hindus in the protests mostly failed. Three, those who delivered speeches at the protest rallies spoke the language of constitutionalism.

Maulana Umrain Mahfooz Rahmani, who is one of the four secretaries of the All India Muslim Personal Law Board, was among the principal architects of the massive protest rally at Malegaon on July 1. Rahmani said the anger among the community’s youth triggered apprehensions that they would take the lead if community leaders did not provide them a vent to release their emotions. It is a testament to Malegaon’s fury and dismay that a lakh of people protested.

Malegaon’s was exclusively a Muslim protest, barring the participation of 100-200 Dalits. “We did invite the Hindus to protest, but perhaps the short notice was the reason why they mostly kept away. Perhaps the other reason is that secular-minded Hindus are themselves scared,” Rahmani said. He said Hindus should understand that lynching is not a Muslim issue. “Lynching diminishes India’s image worldwide, portrays disorder and chaos. In such a circumstance, do you think MNCs will establish branches here?”

Rahmani said Muslims have been abandoned and they must prepare to defend themselves. They should, for instance, pursue legal remedies against lynching rather than merely protesting, which, he said, could be exploited to polarise the society even further. But silence and inaction aren’t options either.

“Would Muslims have felt the need to protest alone had the opposition parties launched a movement against lynching?” Rahmani asked. “India no longer has a secular party. Look at the Congress; its Rajasthan government filed an FIR against Pehlu Khan [a victim of lynching].”

Hundreds of miles away from Malegaon, in Mau, Uttar Pradesh, an anti-lynching protest was organised on July 5 by the Mau Nagrik Manch, a multi-religious body. Yet the only non-Muslims who participated in the rally, which drew an estimated 5,000 people, were those on the stage, most of them belonging to the Left parties.

This wasn’t the first occasion Mau had a protest against lynching – it witnessed one on July 14, 2017. Mohammad Shahzad, a member of the Mau Nagrik Manch, said that he and a friend went around Hindu colonies for 15 days to mobilise support for the rally. “But it was to no avail. They just didn’t come for the rally,” he said.

They did not turn up for the July 5 rally either. Shahzad blamed their absence on political parties which issue statements against lynching but do not mobilise people to oppose it. “With only Muslims protesting against lynching, I fear the chasm between communities will grow,” Shahzad said.

This is particularly so because Muslim youth are extremely agitated over the barbaric killings. In Mau, for instance, they did not chant the staid slogans the Manch had coined – for instance, “Khamosh hain, majboor nahin (We are silent, but not helpless).” Instead, they voiced demands for hanging those accused of lynching.

Also read: How a Fixed Gaze at the Muslim ‘Other’ Helps Political Parties

“In my own speech,” Shahzad said, “I asked the people why they are chanting slogans and applauding speakers, some of whom were a bit aggressive. I asked the crowd: Aren’t we here to mourn the death of Ansari?” From the avowed aim of expressing sorrow, the rally became the site for expressing anger and belligerence.

The third person I spoke to was Maulana Abdul Aleem Bhatkali, a member of the All India Muslim Law Board, who resides in Bhatkal, Karnataka, which witnessed thousands taking to the streets against the lynching on July 5. Organised by a local group, Majlis-e-Islah wa Tanzeem, Bhatkali said the participation of non-Muslims in the protest was negligible. “Leaders of all political parties were invited. They promised to come. But very few were noticed,” he said.

Bhatkali, too, spoke of the pressure from the community to protest against lynching. There was a rising murmur among the young that the Tanzeem should organise a protest under its banner or else they would. Even a downpour did not dissuade people from participating in the July 5 protest.

The speeches at the rally were decidedly political in nature. A media report quoted former general secretary of the Tanzeem and senior journalist Haneef Shabab as saying, “We did not kill Mahatma Gandhi, Indira Gandhi and Rajiv Gandhi. We all know who did it and we all know who worship their killers.”

Shabab subtly questioned Hindutva’s idea of citizenship, which essentially privileges Hindus over Muslims and Christians. He said, “For those who ask us to go to Pakistan, let it be very clear to them, you can kill us here, we are ready to go to qabristan [graveyard] here but we won’t go to Pakistan. This is as much our country as much as it yours.” To Shabab’s argument, Bhatkali added, “It is so inhuman to kill the weak, as Tabrez Ansari was. This will only give a bad name to Hindustan.”

Also read: Despondency Is Not an Option for Muslims in India Today

My fourth narrative came from Niyaz Ahmad Farooqi, who is the secretary of the Jamiat Ulama-i-Hind, a socio-religious organisation with a 100-year-old history and a pan-India footprint. The Jamiat, famously, opposed Partition and Jinnah’s two-nation theory. On June 26, a three-member team of the Jamiat flew down to Ranchi and presented a memorandum against lynching to the Jharkhand government. For an hour or so, a 100 people protested at the site.

Jamiat, which boasts the capacity to organise protests, had consciously taken the decision to keep the protest outside Raj Bhavan low-key. Farooqi explained, “Our purpose is not to create a rift between communities, particularly in the political environment prevailing currently, by displaying anger. We do not wish to speak against political parties, including the Bharatiya Janata Party.”

Farooqi said the primary target of the Jamiat’s protest is the state’s inaction against lynching. “It is painful to see Muslims getting lynched. Mobs are killing Muslims today; they will kill from another community tomorrow. The need is to create a multi-religious platform to protest against the state.”

For five years, Muslims waited patiently for the opposition to mobilise people against lynching. Perhaps they also refrained from protesting in the hope that the BJP would be voted out in the 2019 Lok Sabha election. Neither happened, and Ansari was brutally killed within a month of the Modi government coming to power. The anger of Muslims has brimmed over.

“These protests,” said M.R. Shamshad, a Supreme Court advocate who engages with Muslim-related issues, “mark a failure at the political, social and judicial levels. It is a failure at the political level because no political party has displayed the courage of conviction to initiate a movement against lynching. At the social level, the protests haven’t drawn support from non-Muslims. At the level of judiciary, trials in lynching cases are being delayed and bail is being granted to the accused.”

It won’t be wrong to say that the protests of Muslims are but a cry of anguish in isolation, a yearning to be heard by the state gone deaf, a prayer to other religious communities to oppose lynching, an expression of disappointment at the parties which take their votes but do not combat the hate politics of the Hindutva groups. In case these messages coded into their protests remain unheeded, Muslim alienation will likely deepen further.