The police is classifying Suvarna Salve as a 'habitual offender' – a section which is disproportionately used against marginalised identities.

Mumbai: The cost of exercising one’s constitutional right to protest in Mumbai has been fixed at Rs 50 lakh.

The Mumbai police has issued a notice seeking surety of a whopping Rs 50 lakh from a 24-year-old student and cultural activist Suvarna Salve for participating in an impromptu protest in January, organised in Mumbai in the wake of the attack on students and faculty members inside the Jawaharlal Nehru University (JNU) campus.

While this is the only FIR ever registered against Salve, the Mumbai police have also decided to classify her as a “habitual offender” and initiate another administrative procedure of “externment” against her.

Salve, a lead singer and activist of the cultural troop Samata Kala Manch, was one of the 31 persons to be booked by the MRA Marg police for participating in a peaceful rally from Hutatma Chowk to Gateway of India in South Mumbai on January 6. Over 300 people from across Mumbai had joined the rally which was organised in protest against the violent attack on students in JNU campus by activists belonging to the Rashtriya Swayamsevak Sangh’s (RSS’s) students’ wing, Akhil Bhartiya Vidyarthi Parishad (ABVP).

The Mumbai police’s decision to slap FIRs against activists in the city had attracted severe criticism. Rights activists and political leaders had termed the Mumbai police’s action as excessive and also equated it with the Delhi police which had remained a “mute spectator” and done nothing to control the masked mob that roamed around freely for almost three hours in the JNU campus but later had booked the victims instead.

In Mumbai, the protest was organised at two separate spots, just a few kilometres apart. The police have filed two separate FIRs – one at MRA Marg police station and another at Colaba police station – for those attending the protests. In both places, several prominent figures like former Bombay high court judge B.G. Kolse-Patil, and actor Sushant Singh had participated. When the rally soon transformed into a sit-in protest at Gateway of India and more and more people joined in support, state ministers like Jitendra Awhad visited the spot to negotiate with protestors.

While the initial decision was to not take criminal action against the protestors, the police had eventually changed their stance. In all 31 persons have been named in the FIR and have been booked under section 141, 143 and 149 (unlawful assembly) and 341 (wrongful restraint) of the Indian Penal Code, along with section 37 of the Bombay Police Act, 1951.

All sections are bailable and punishable for less than six months. Prominent persons were excluded from the FIR and only student activists and some lawyers were named. Some of them even claimed that they were not present at the protest site but were still named in the FIR. 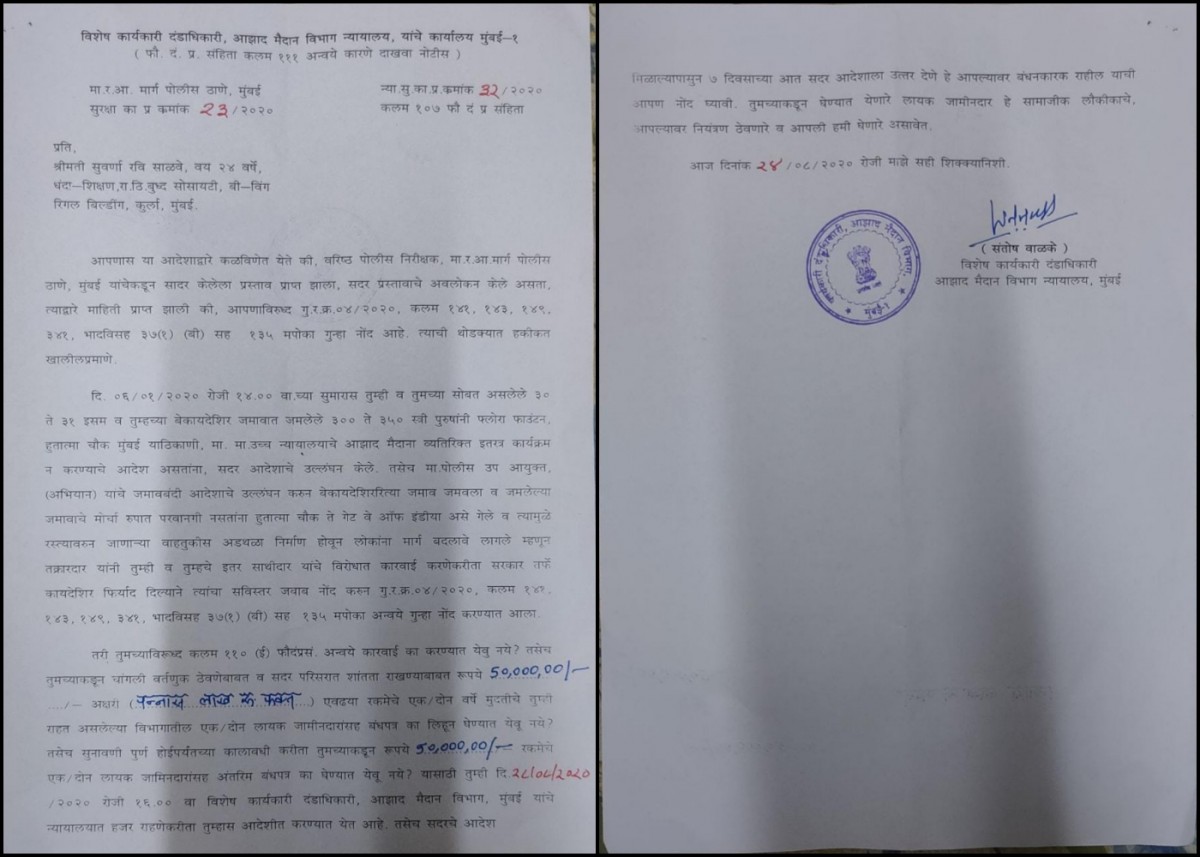 Despite of filing a case of unserious nature, the police have sought an unusually high surety, and more strangely have demanded it only from Salve. The notice, issued on August 24, has sought an explanation as to why Salve a proceeding should not be initiated against her under Section 110 (e) of the CrPC. The notice also seeks at least one of two persons to appear as a “surety”, pledging an amount of Rs 50 lakh, ensuring her good behaviour for the next two years. If she fails, the amount or the property would be confiscated by the state.

Salve says this is done to discourage her from participating in any political activism in the future. “This is done clearly with an intention to harass,” she said. “There were several influential people who had participated in the protest but they chose to go behind one student activist. They know I will never be able to furnish such surety ever. I belong to a Dalit community, and stay in a slum rehabilitation housing,” she pointed out.

Since her college days, Salve has been a vocal anti-caste voice, participating in protests and students’ agitation across India. In 2016, when Rohith Vemula, a PhD scholar at University of Hyderabad, was allegedly killed in an “institutional murder”, Salve joined the Joint Action Committee (JAC) formed to fight for justice for Vemula and other Bahujan students facing discrimination in campuses.

In the past years, when anti-caste organisations and political parties like Vanchit Bahujan Aghadi called for a bandh in the state, Salve like several other activists was served a notice under Section 144 of the CrPC against participating in any public gathering. “There has been a systematic attempt made to curtail dissenting voices. Like me, several other Ambedkarite activists have been served such notices,” she said.

Her lawyer Ishrat Ali Khan says the police’s decision to classify her as an “habitual offender” also stems from the same mentality. “Look at the crime here – organising and participating in a peaceful protest. From no stretch of imagination can an individual exercising their right to expression and protest be termed as a habitual offender,” he said.

Section 110 of the CrPC, also in legal parlance called as “chapter proceedings” is initiated against those who have been booked in multiple crimes. An executive clause, the proceedings under this section is initiated by the Assistant Commissioner of Police (ACP) level officer and if convicted, the person is externed for a stipulated period of time outside the district limit.

Several researchers have pointed to its discriminatory nature and how it gets disproportionately used against marginalised identities like Dalits and Denotified Tribes. In most cases, it is noticed that the executive officials hearing the case convict the person and the individual then has to move the high court to get their name cleared. This is a tedious process, requiring both resources and patience.

Khan, in his over a decade of experience handling cases under this section, said he had never seen the section being slapped against someone for protesting. “The subsections cover several crimes like theft, dacoity and extortion. The police claim to use it against “hardened criminals”, something that Salve or any dissenting activists don’t qualify for, he said.